In 2011 I traveled to Thailand in search of a link between Buddhism, morality and the Thai martial art, Muay Thai. Along the way I discovered Ajarn Lek, a practitioner, teacher and master of Muay Chaiya, an ancient variation of Muay Thai. He was kind enough to invite me over to discover more. 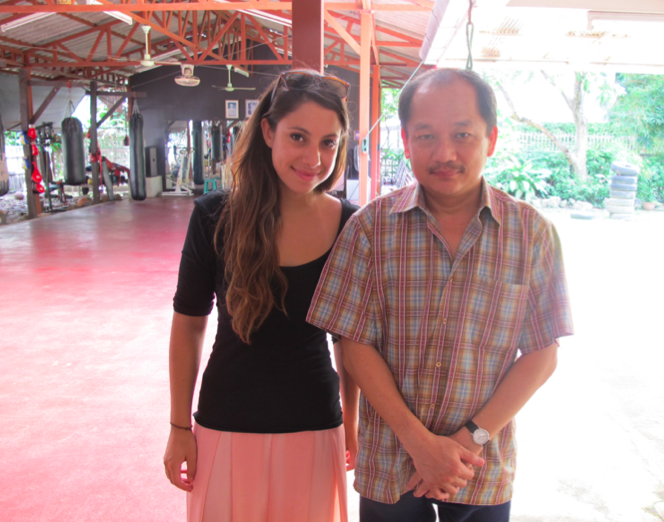 Sarah: I read that a monk started Muay Chaiya, is that correct?

Khru Lek: It was started by Por Tanma who was a warrior, but after the battles, wars and politics he got tired so entered the monkhood. While in the monkhood, he could catch an elephant and tame him and villagers were surprised by his talent. He taught Muay to his students for defence and protection as well as to his own family (sons daughters, uncles) and moved to other towns where he also taught Muay Chaiya (passing on the art). That is why Muay Chaiya still exists today, as the person who learned from the monk was the mayor of Chaiya town.

Sarah: It seems that monks often take an active role in training/supporting Muay Thai, how does that fit in with the Buddhist concept of non-violence?

Khru Lek: The monks taught Muay Thai for strength and knowledge; to protect yourself and your city, because back then Thailand was going through a lot of wars and monks were perceived as the holy figures (looked up to, respected and trusted). But some monks today practice Muay Thai also, which is wrong, as monks should not be practising violence. Monks participating (practising and watching) in Thai fights is wrong. The reason that monks taught Muay Thai back then was with an intention to give the knowledge of self-defence to the people of Thailand.

Sarah: Do you see Muay Thai as a form of violence, an act of self-defence or an art?

Khru Lek: Muay Chaiya and Muay Thai are not sports, it became thus after the rules and regulations were put in place. Back then Muay Thai involved gouging out eyes, breaking bones, grabbing balls, but Muay Chaiya is taught as a foundation for self-protection, a basic martial art form before going on to learn how to use the sword and clubs. With that foundation, it also teaches you how to have mercy: you don’t kick a man when he’s down. Use it only when you need to. It’s a manner also – to behave. It’s a true art form, it involves calculating how to block a punch, how to respond back to your opponent without hurting yourself, how to transfer his energy back to him.

Sarah: Could you talk a bit more about the spiritual aspects in Muay Thai/Chaiya?

Khru Lek: In a similar way to how the Buddha taught you, you have to know that you are using Muay Thai for the right reasons (know yourself that you are not wrong). It should be used for self- defence, not to pick a fight. At first you start training with the A B C and if you cannot achieve that it will prove that you are hot headed, it involves setting up your conscious to be calm. The teaching will not continue if you cannot adjust yourself to be composed. The second one is learn how to respect that masters or the teachers, the third is that once you know how to use Muay Thai, you use it well, with kindness. Similar to Buddhism, you know what is right and what is wrong. If he punches you, that is wrong, and if you punch him, it is still wrong. Try to maintain peace. Know what is right and what is wrong; know who has good intentions and who has bad intentions. Similar to Buddhism, if we are good we make good merit, if someone tries to harm us, the good force will protect us and harm him instead (Karma). The key is to remain still (composed) and grant forgiveness. If someone is a bad person and has bad intentions, and throws a punch at you, but if you are calm and composed you can block just by a mere raising of the elbow. The energy gets reflected back to him, he gets hit with his own punch. If you remain as composed as possible you basically have to do nothing.

Sarah: Would you agree that by training in traditional Muay Thai, you can become a better person, morally?

Sarah: Has the transfer to the West and to the ring detracted somewhat from the spirituality in Muay Thai?

Khru Lek: Definitely, especially with the growing popularity of Muay Thai in the west. It is difficult to practice Muay Chaiya, it takes more time to learn than a Muay Thai exercise and if it keeps on going like this, Muay Chaiya will lose its existence. People are more attracted to kickboxing rather than Muay Chaiya where you sit for days before being able to kick or punch.

Sarah: Does Muay Chaiya have a wai khru and if so, what does it mean to you/what can be learned through it?

Khru Lek: Wai khru is firstly a representation of respect to the masters, parents and the land, and secondly it’s an exercise to calm you down with the gestures and movements, especially if you are scared. Third the wai khru is a representation of your master and camp – your form and style will tell who you train with.

Sarah: Should children train from a young age?

Lek: It is good for children to learn, as it is just like a language – if you are young it is easy to pick up. It’s more difficult to learn when you are older.

Sarah: What is your opinion on women training in Muay Thai?

Khru Lek: It’s a good idea for women to learn Muay Thai because they need to learn some form of self defence, but they will not become as good as men as their size, strength and power is different.

Sarah: Why do you think they are often discouraged from Muay Thai?

Khru Lek: For women I teach them only a few tricks that would be useful in a dangerous situation. I could teach them everything, but in practice they would use just a few things. The reason why women are discouraged is that in the Muay Thai camps they are surrounded by men who are not highly educated so they tend to think about sex and think you are weak.

Khru Lek: Modern Muay Thai is all about winning or losing –all about the points, and gambling. It involves violent emotions. Muay Chaiya is different – it is more reasonable and forgiving. If two people fight each other in a ring and one gets knocked down, the ref will bring him to the corner to rest and ask if he wants to go on, if yes then he continues, if no, he goes home. It is less focused on winning and losing.

A big thanks to Ajarn Lek for taking the time to talk to me about Muay Chaiya, the art form he has dedicated his life to. Thanks also to Chattarin Hongladarom for simultaneously translating for me during the interview and later again translating the footage.

You can train with Ajarn Lek at his gym at Baan Chang Thai, Ekkemai 10/2, Sukhumvit, Bangkok.