A cowboy walks through the kitchen door at Cold Creek Ranch, ducking slightly, out of habit maybe, as he sure is tall. His walk is slightly bowed, perhaps from years of riding or perhaps from worn out heels on his boots, but he stands straight. His grey hair gives no clue of its former colour and though his brow is furrowed, he certainly doesn’t look eighty-two years old. His eyes are watching me but they’re seeing so much more – there are vast pastures of life in those eyes.

Joe Cannon may be a closed book at first glance, but if you manage to open the pages, he’s a never ending story. 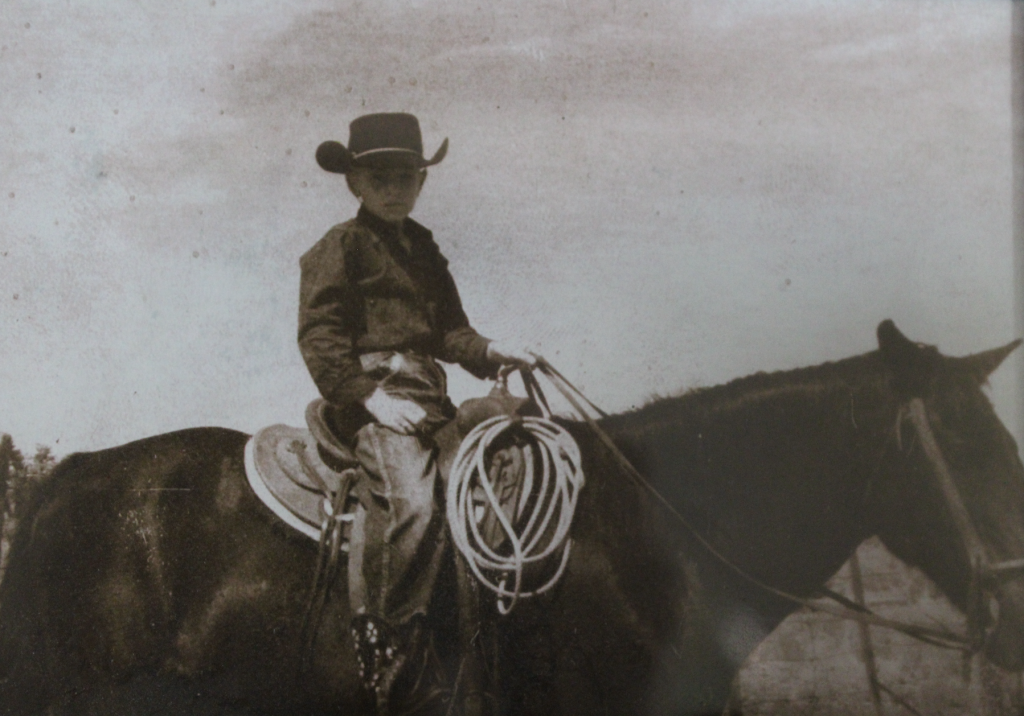 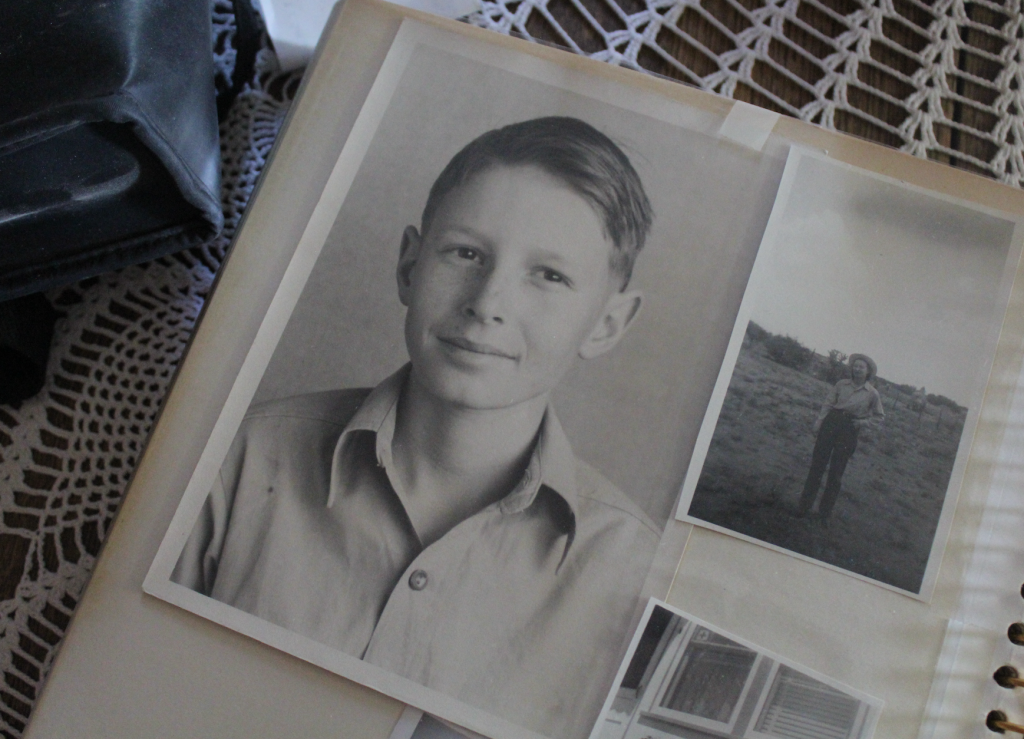 It’s hard to know where to start when writing about someone who has more stories than a library, so knowing I would fall short, I realised that turning on my video camera would be the best way to bring Joe to all the people around the world who haven’t had the good fortune of meeting him for themselves. So, with just a little narration from me, I’ll let Joe tell his own story.

There’s something oddly comforting about a cowboy being born in a town called Spur, almost like the world was confirming the destiny that he already knew awaited him. As he says, he never imagined any other future than being a cowboy. Though Joe was born in Texas, he moved around between New Mexico and Arizona for the rest of his life – the Wild West may have state borders now, but to the people who work the land it’s just one ranch after another, the tumbleweed blows right on through. Though Joe has never been on a plane, never travelled beyond his lands, he’s lived so much more than anyone I know! How many people have you met who have lassoed a coyote?

While I was staying at Cold Creek Ranch in Arizona with Eric and Jean Schwennesen, Joe was a regular fixture at the dinner table (no doubt partly due to Jean’s amazing cooking) and he kept us enthralled with one story after another.

I must have been about eleven, and I was up in New Mexico with my dad gathering wild cattle. There were 4 other men, I was just there to stay in the camp, cook and feed the horses. Well we were running out of groceries and horse feed, so the men all left, taking 2 truck loads of cattle down the forty mile dirt road to town. They left me behind and said they’d be back in the morning. It was pretty high elevation and that night it snowed, I knew they wouldn’t be able to make it back up on that dirt road with all the snow. I was left with no groceries and no one to talk to for nine days. All I had was a bunch of canned plums and stuff to make biscuits. Well I made biscuits and ate plums!

On the ninth day I ran out of horse feed, so first thing in the morning I saddled up a mule, stood on a bale of hay and climbed onto the mule, I turned all the horses out (we had about twenty-five), and started herding the horses down towards the town. It was about twenty eight miles to Mimbres, New Mexico and I was just about to get there, around three in the afternoon, when I saw my dad and the other men in the trucks. He slowed down when he saw me and said,

‘What are you doing?’ I told him I was out of food for the horses, and he said that they had food and groceries. He told me to turn those horses around and go right on back. I thought to myself, they could at least have offered me something to eat. I didn’t get back to the camp till about midnight. Life was rough back then, my dad was a good guy but he expected a lot out of everybody. 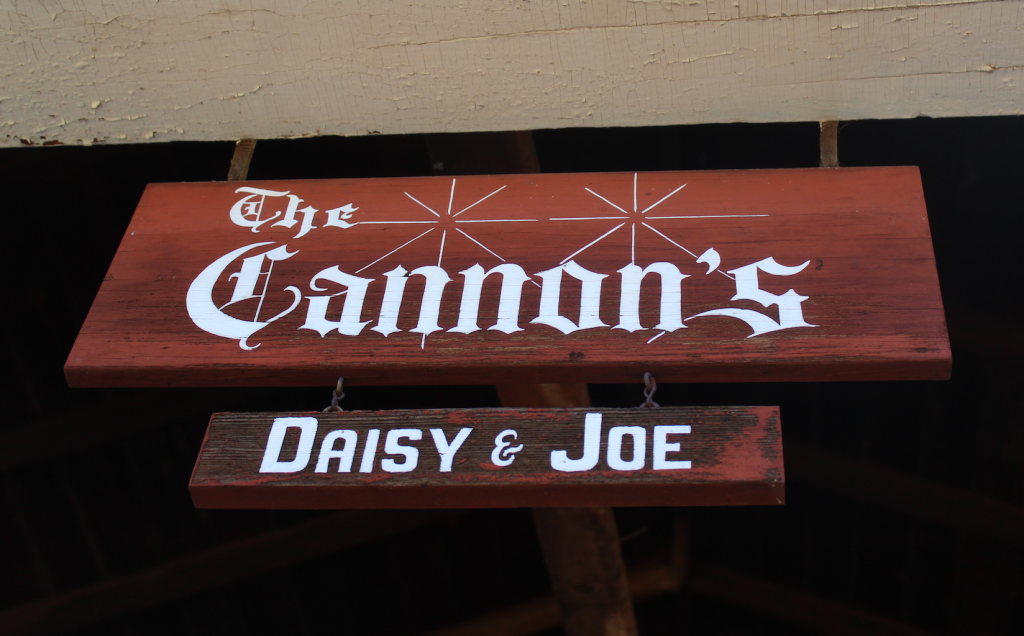 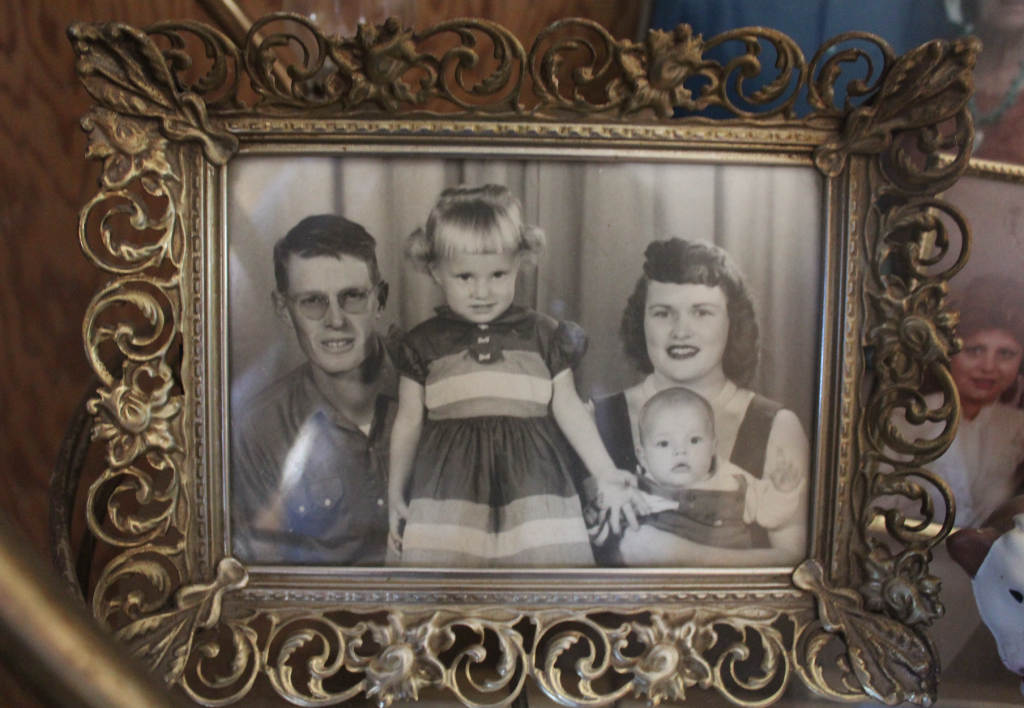 Joe with Daisy Mae and kids Bopper and Sissy

I was up at the Crooked Pole ranch near Coal Creek and there was this big old dog called Oso, Bear – he was a Border Collie. I was sitting down and he came up and laid a stick on my knee.So I picked it up and threw it for him. And then again. I must have thrown it about five hundred times, and I needed to go. So I said to him, ‘that’s it Oso, enough’, and he was still staring up, looking at me with those eyes. So I took the stick and broke it into pieces and threw it on the ground. He just looked at me, and then grabbed the reins from out my hand and ran off with my horse. Took me some time to get my horse back. He liked me though.

I spent a lot of my time in Arizona getting to know Joe, and while my hosts Jean and Eric were away one weekend, Joe came and picked me up and took me over to his place so that I wouldn’t be ‘lonesome’. Once you drive across the Gila river, coming from Threeway, all the land as far as the eye can see is Joe’s land, or rather the land of the K7 ranch. The ranch house is at the end of the long private road, right by the river bank and tucked away, hidden among big trees and flowering plants. In the front yard is a small windmill, a miniature Chicago Aermotor that has come to be so evocative of the arid plains and deserts of the American West. Joe tells me that Daisy Mae loved windmills. Stepping into his house in some ways feels a bit like stepping back in time. The house is immaculately looked after and just feels cherished, as if someone has poured love into every corner, every piece of furniture, every framed photo. Daisy Mae, though she passed away a year ago, is still very much there in the home they shared.

The living room table is branded by all the local ranchers, you can see the Cannon brand at the centre: K7 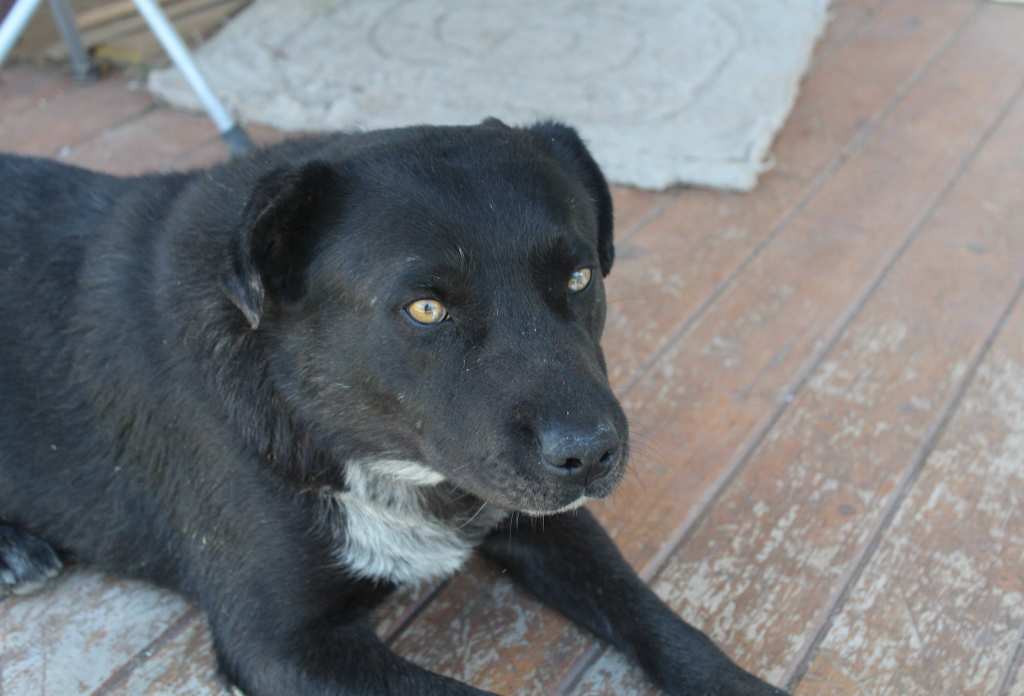 Sam sits quietly on the porch outside the house. Only 2 years old but impeccably behaved, he’s a true cow dog. 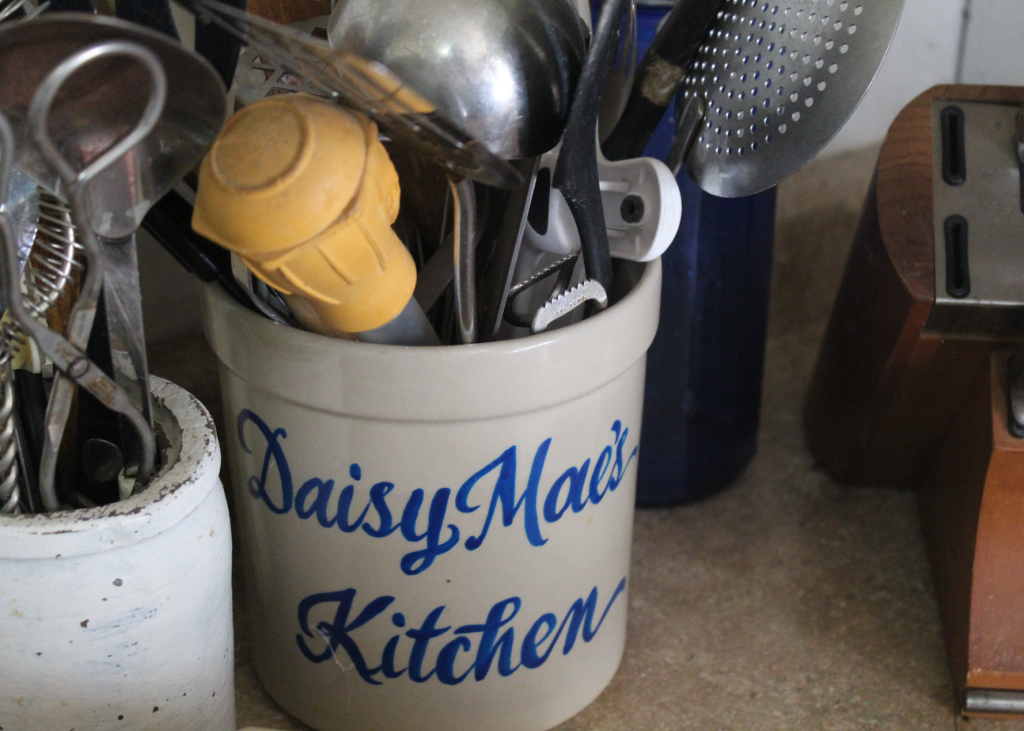 We started off the day with a big plate of bacon, toast and eggs then headed out to the corral to saddle up Peppy (Joe’s beloved paint horse) and Buddy (Daisy Mae’s beautiful buckskin). The tack room feels a bit like a history museum, filled with saddles made by his uncle in Texas – everything is so beautifully crafted, with care and attention to detail and a selection of bridles and bits. I could have spent hours just exploring them all. But there was work to be done! Once the horses were tacked up, we loaded them into the trailer then drove out to the far end of the ranch, before mounting. The land is rocky and can be steep, but Joe manoeuvers it all with expertise and effortless elegance. He never has to get off to adjust his cinch, his saddle never moves.

While we rode around checking on water tanks, Sam kept a keen eye out for cows. A jackrabbit ran past and he didn’t even turn his head – a real working dog alright! 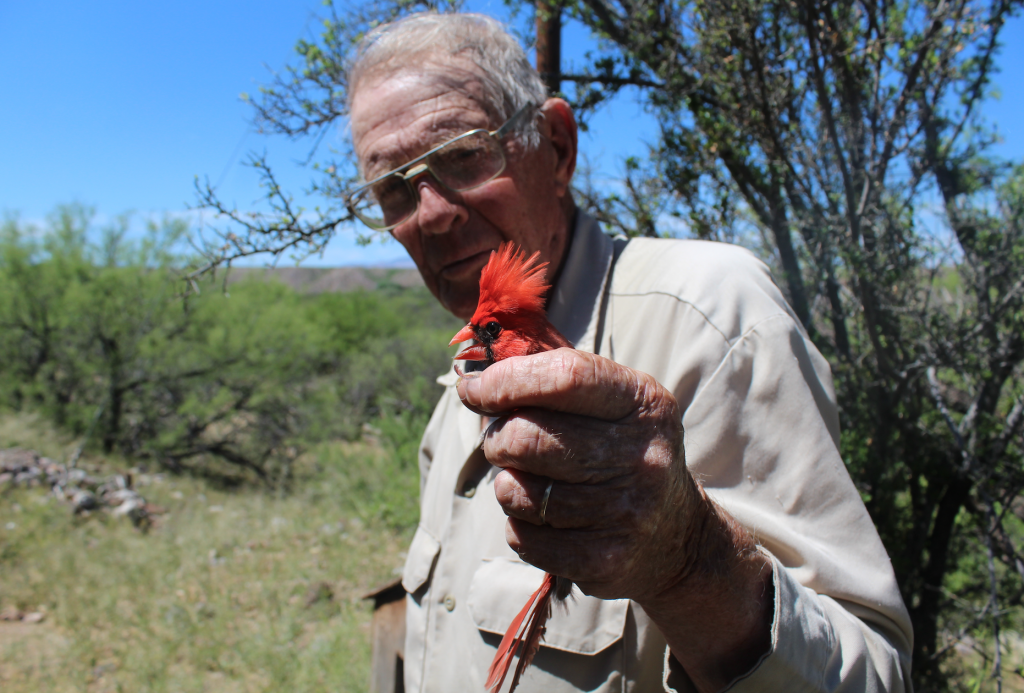 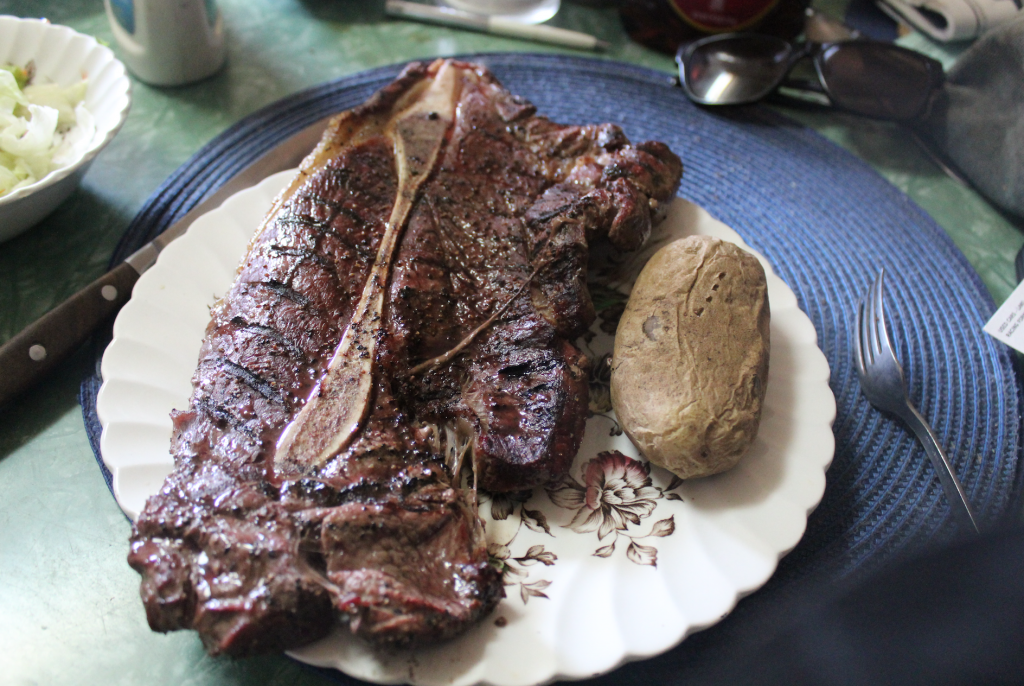 If you’ve never cowboyed up, I’ll tell you it’s hungry work. When we got back, Joe fired up the BBQ for his usual meal of steak. This time he had a couple of cuts of Wagyu beef from his grandson who works on the University of Arizona ranch, where they keep a number of different breeds. I’ve never been a big steak lover, but life in the West changed that for good. Cowboys know how to cook meat in a way no fancy, overpriced restaurant in Europe does. Maybe it’s got something to do with living with the cattle, rearing them, and even killing the cows themselves. Or maybe it’s 82 years of eating a steak almost every day of his life. Either way I ate every scrap of that Wagyu steak and the jacket potato too, and it was one of the best meals I’ve had.

As we ate we chatted about a number of different things, and I asked Joe about religion. Most people in South & Western America attend some kind of service, and seem to be more regular in their church going than their counterparts in Mexico, who make a lot of noise about Catholicism and God but never seem to go to church. Joe’s reply really blew me away, I think I can safely say that I hope the cowboy religion to be true too.

I’ve never been to church, I guess I believe in the cowboy religion. When I die, Old Peppy will be waiting for me and I’ll saddle him up and we’ll ride off together.

Joe spent at least 20 years of his life as a Cattle Inspector, a job which is somewhat similar to the role of a Sheriff, just focused around cattle crime instead of human crime. He had a truck, sirens, power of arrest and even the traditional American law enforcement star! His work as in inspector took him into some interesting situations, from all the ranches in the area to Apache council meetings! 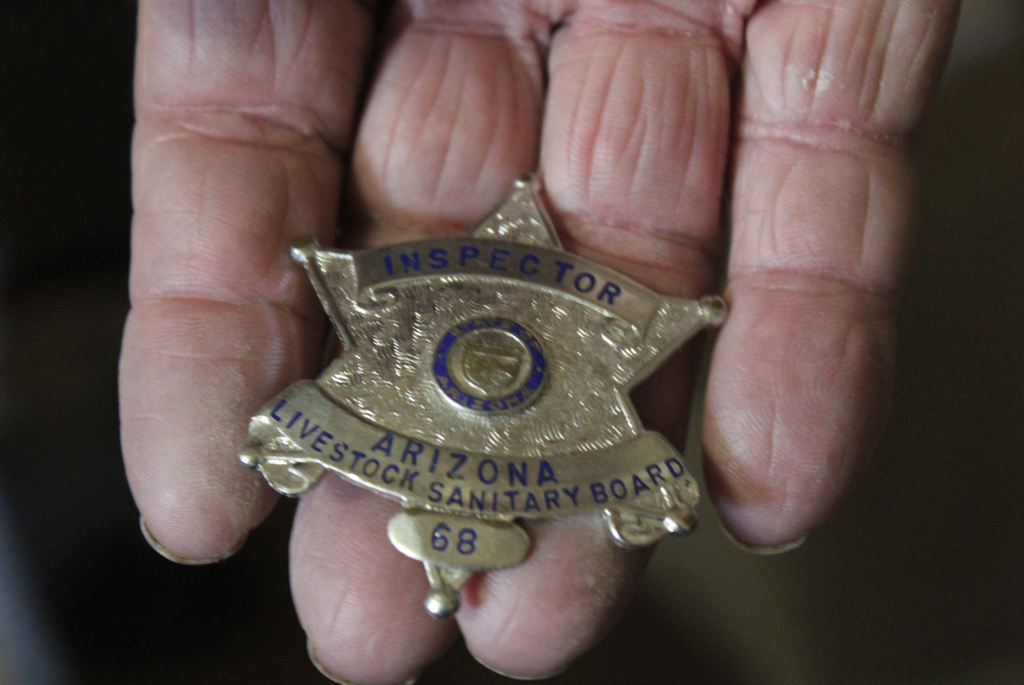 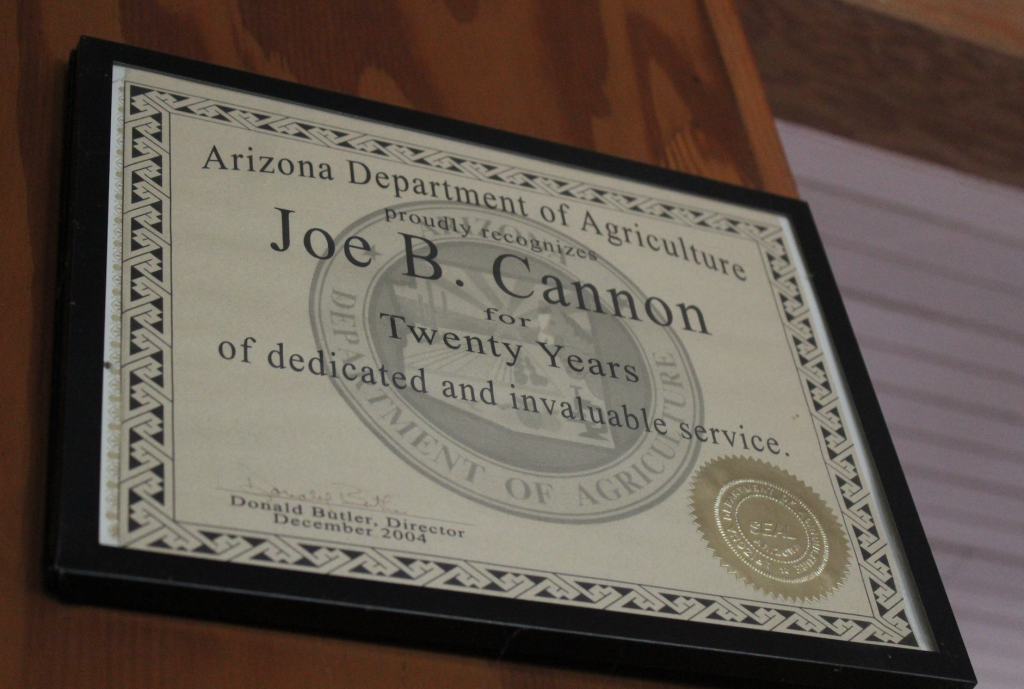 I didn’t just hear some wonderful stories from Joe, I made lifelong friend. Someone I look up to and can learn so much from – everything from his skill as a cowboy and rancher to his outlook on life. I think everyone needs a Joe in their lives. So if you can’t make it to Arizona, I hope at least my words and these videos will touch you in the way that spending time with Joe touched my life.

Someone once asked me “if you could go back and change something in your life what would you do?” I thought about it for a little and then said “there are a few old horses I wouldn’t saddle up but other than that I wouldn’t change a thing.” 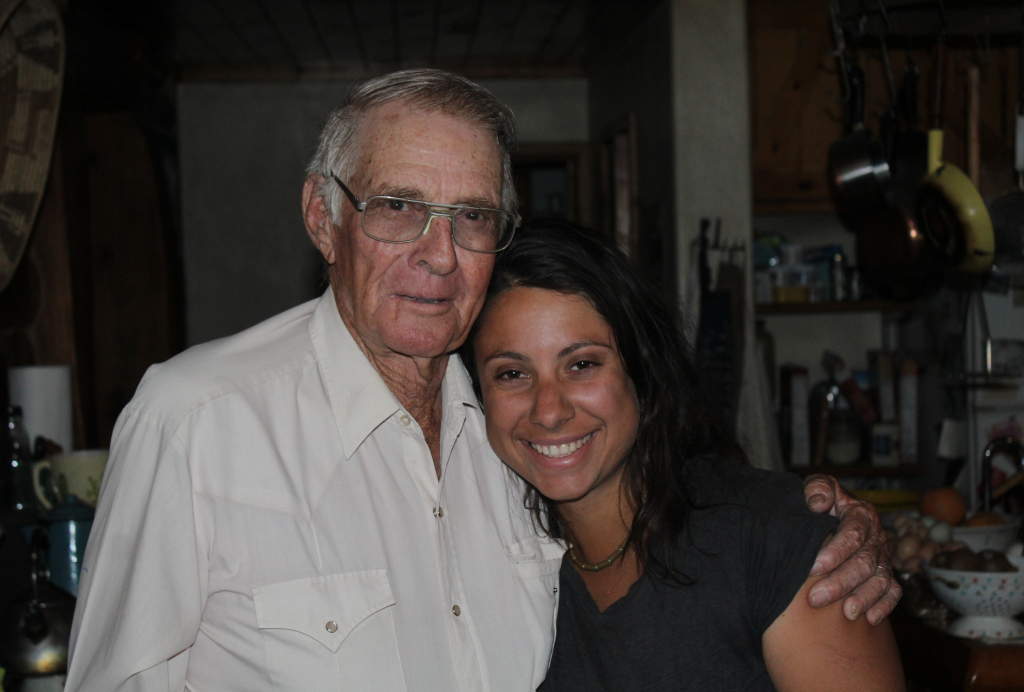