Back home, America and Americans are often caricatured to be gun totin’ rednecks who live and die by the second amendment (their right to bear arms).

A well regulated militia being necessary to the security of a free state, the right of the people to keep and bear arms shall not be infringed.

I have always been taught that gun violence is directly proportionate to the ease of accessibility in buying guns. And yes, you can walk into a a Walmart and buy a gun, and in many states you don’t even need a license. However I don’t know enough about the statistics to have an informed opinion, and out on the US ranches* guns are mainly used for mountain lion protection as opposed to violence.

While out in Arizona, I discovered guns and shooting in a whole new light, as a sport, or even, as an art. 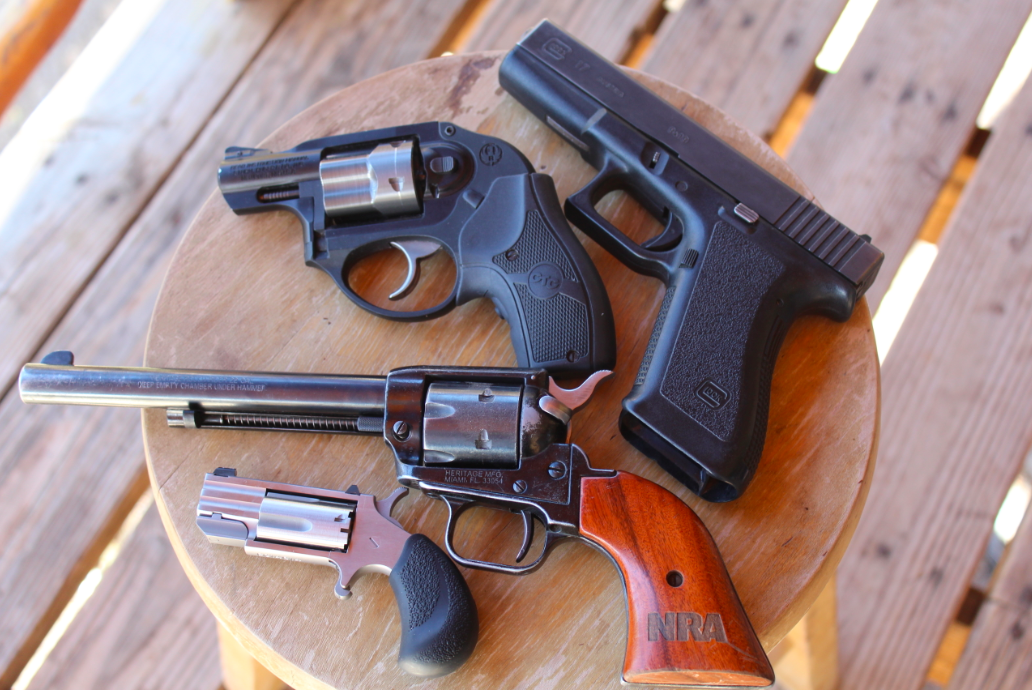 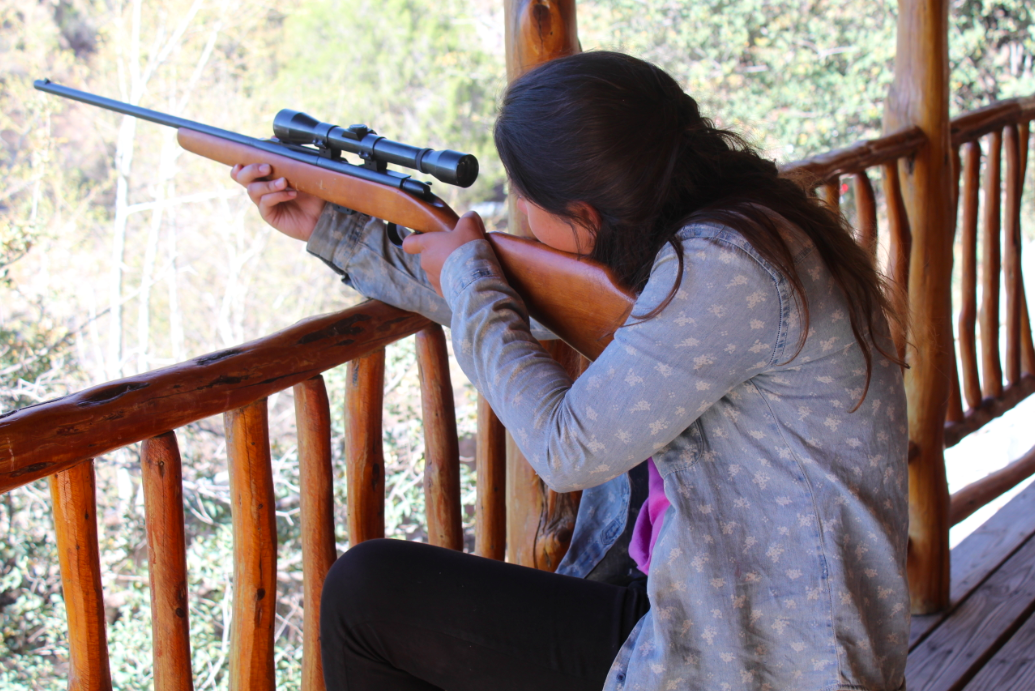 As I’ve been travelling around the US, I’ve come to get used to finding revolvers in purses, rifles in the umbrella stand, shotguns in every closet and to see pistols tucked into the waistband of a cowboys pair of jeans. It’s certainly a way of life here in the Deep South and over in the (still somewhat Wild) West and I too, have fallen in love with shooting.

While I was staying at Cold Creek Ranch in Arizona, Eric handed me his Remington 581 bolt action 22 calibre rifle and pointed at a target so far away I couldn’t even see it without looking through the scope! The first shot shocked me so much I nearly dropped the rifle and certainly missed the target however the next 14 shots all hit true and the sound of the metal ringing clearly across the valley was unexpectedly addictive. Soon I was spending all my free time begging to bring out the rifle. When hitting the target became too easy I progressed to trimming the twigs at the end of the big tree which were starting to block the view. Topiary by Rifle – could this be a new career? Would certainly be a rather expensive and noisy gardening choice but maybe it would attract attention in those big stately homes.

Soon Eric had me trying out the rest of his collection. The revolvers I didn’t like as much, the kickback is huge and it’s harder to be quite as precise without the scope (for a beginner like me at least) so I didn’t spend too much time with those. It’s pretty amazing how much force one of the tiny revolvers really can pack. Some of them, like the NAA Pug, were so small they fit in the palm of your hand and then 2 seconds later nearly ripped your arm off when you fired it. 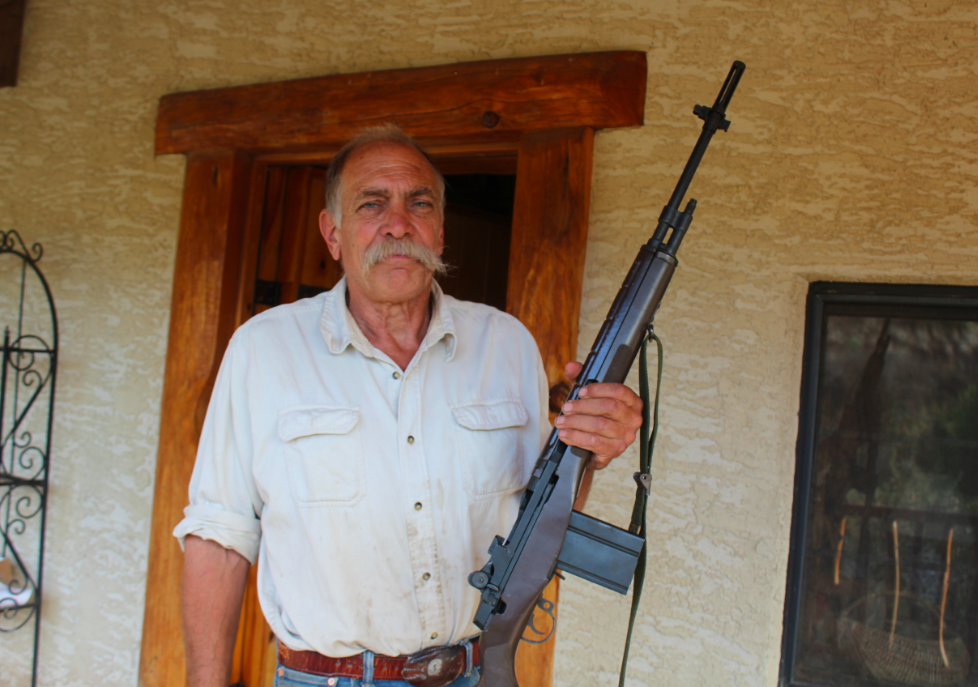 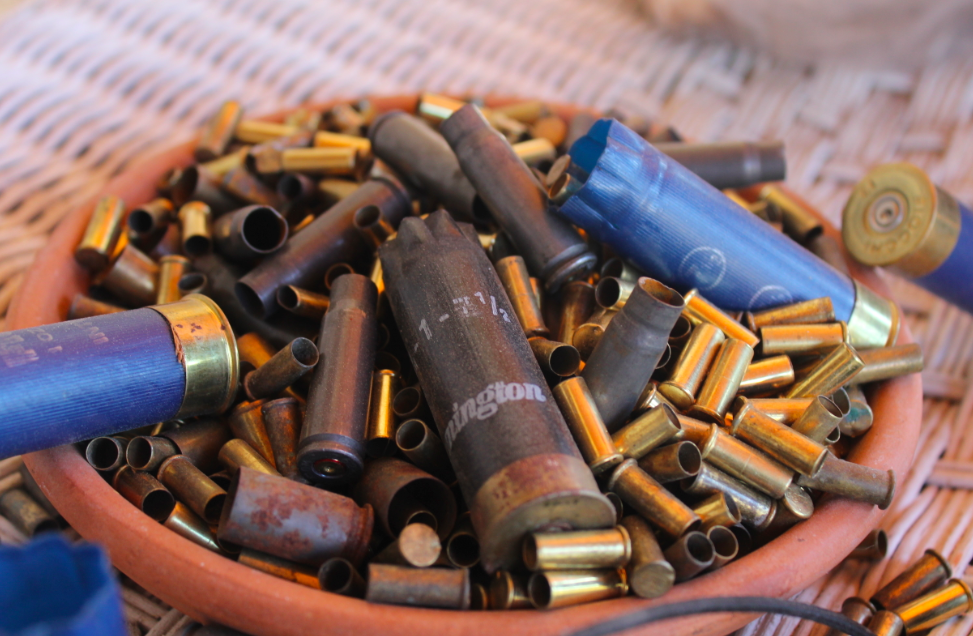 One sunny afternoon, Eric brought out the M14 – the godfather of all the guns. Even with the ear protectors on the sound was deafening! I don’t know why, but my cowardly self couldn’t summon the courage to shoot the gun, it was just – for lack of a better description – ‘too scary’. The more I thought about it, the more I feared it until finally one day when we were alone Eric brought it out again and looked at me questioningly. I took a deep breath and nodded, I could do this! The sound was indeed loud, and my shoulder was bruised by the end from the kickback but something inside me changed when I pulled that trigger, and then kept on pulling. It’s like all my other fears faded away & I felt strong. I am so grateful that Eric persisted as much as he did. As trivial as it may seem, shooting that M14 was a pivotal life moment that I shall never forget.

A couple of weeks later, inspired by Annie Oakley, we took the rifle to the next level – horseback! Note that these photos were taken with an unloaded rifle as I was just getting used to different positions and balancing on the horse while trying to get a good line of sight. I managed to get onto my feet a few times too but slipped off just as quickly! I think Butter realised I would slip off if she shifted the weight on her feet and then proceeded to keep doing it. I wouldn’t shoot a gun while on top of a horse until I was 100% sure the horse was acclimatised to the sound either. Watching movies like Quigley Down Under and Tombstone have given me an ardent desire to learn to shoot while horseback and to actually hit the target every time so I guess I’ll have to go back to Arizona and keep on learning!

As much as smaller guns are favoured for quick firing in the Western Movies, my heart has been captured by that Remington and I think it will always be my first, and favourite gun. 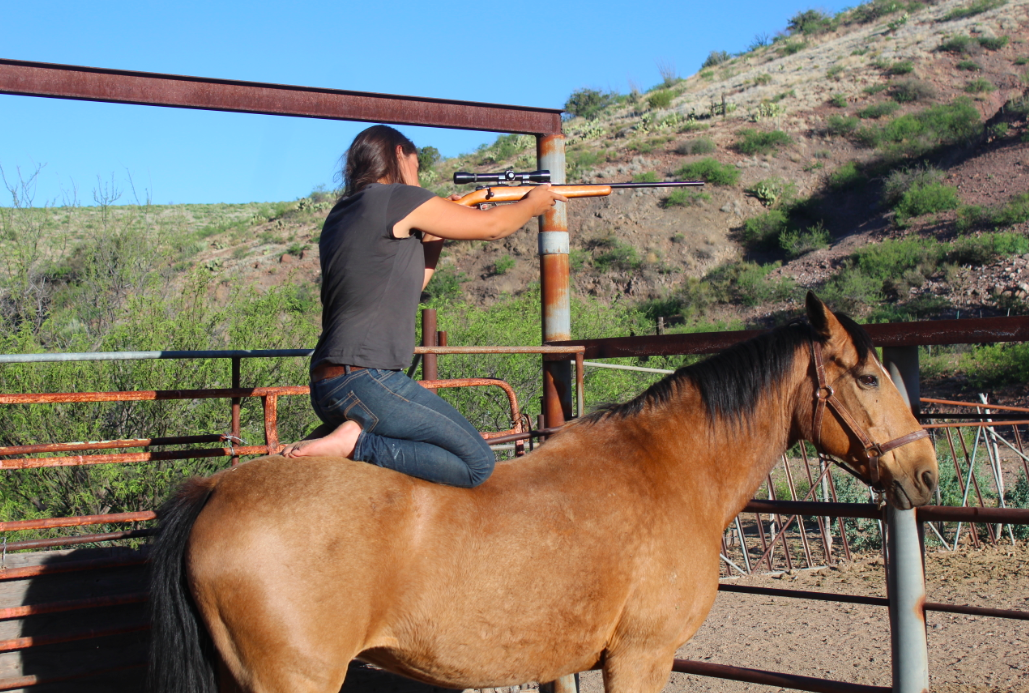 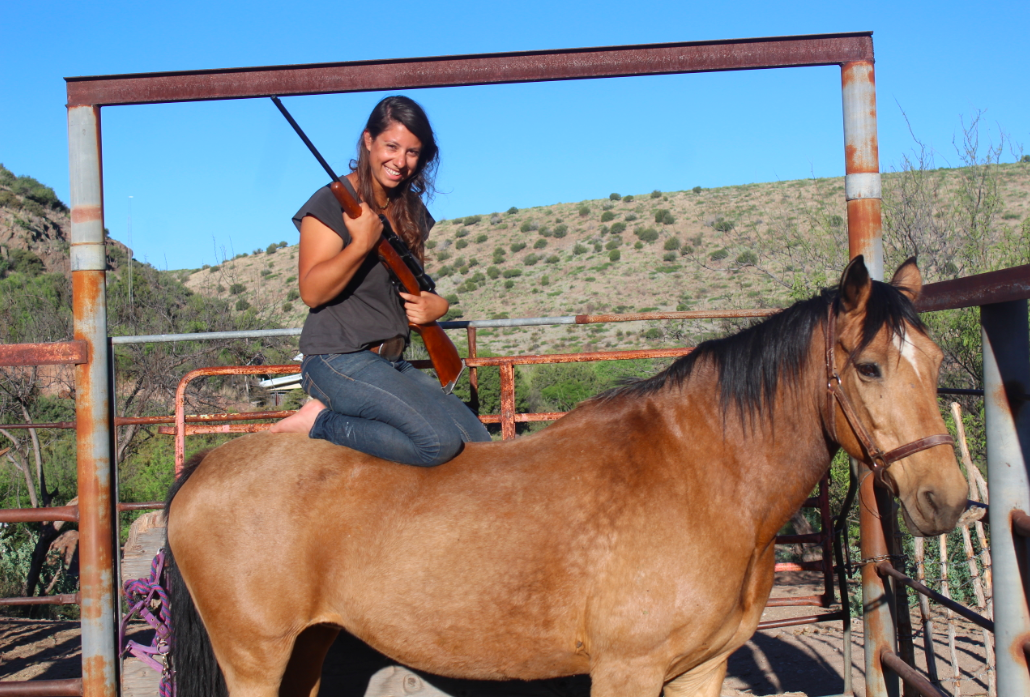 * I say US ranches because there is still a significant amount of cattle rustling related gun violence across the border in Mexico, unrelated to Cartels.