We met on Princess May road – it was a beautiful day, the sun was shining and I was very excited for my first time cycling in central London! We meandered around the little streets, we had all day so there was no need to fret about getting lost. At one point we cycled past a cherry tree, stopped, spent quite some time desperately trying to figure out how to climb it to get at the cherries, failed, and continued on our journey.

Our next port of call was Clissold Park – definitely a place to take the kids, there are so many exciting things to do! It was very hot and there was a little paddling pool which I dipped my feet in for a while before heading into the butterfly dome. I love hot weather but this was like walking into a steam room, they must definitely have been tropical butterflies! 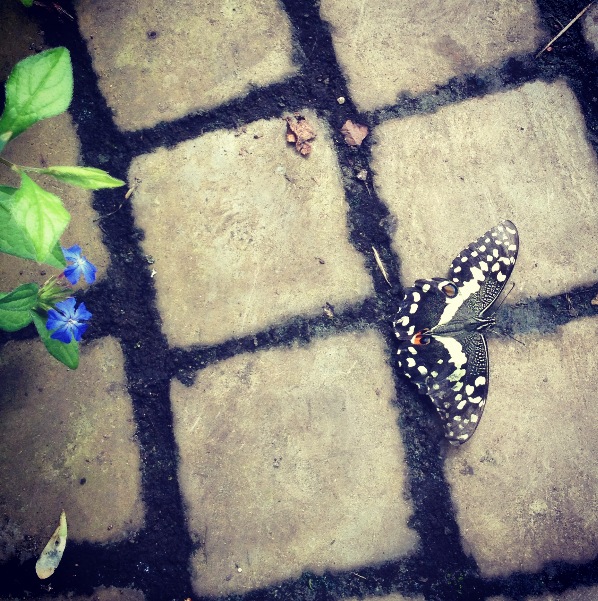 We made our escape quite quickly, had a quick look at the deer and goats before continuing up to the big house which sits atop the hill, watching over the park. I hadn’t had breakfast so I picked up a fresh orange juice and a brownie to keep the energy levels high! We sat in the sun outside for a while, doing a crossword before deciding that we were both rather hungry so we cycled up to Stoke Newington Church Street on the hunt for lunch!

After deliberating over the rather boring menu at Blue Legume cafe for 20 minutes, we happened upon a Turkish place called Clicia. I cannot reccomment this little unassuming cafe highly enough – the food was bursting with flavour and it all tasted so fresh.

We ordered 4 mezze to share – a red pepper stuffed with goat’s cheese, courgette bread with salad and a very light yoghurt and mint sauce, faba beans and the best dish – fresh prawns in the tastiest spicy tomato sauce I have ever had! Needless to say we licked the plates clean! 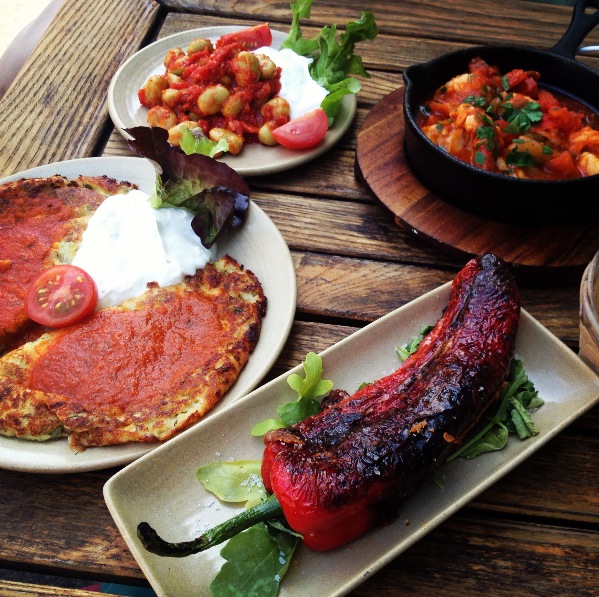 We wandered in and out of the shops after, found a homemade ice cream stand and had a cup of coconut ice cream then picked up some fresh fruit from a greengrocers to keep us going on the long cycle ahead. I chose a nectarine and a plum and he picked up some kakis (sharon fruit/persimmon). I have never tried kaki before, but it was totally different to how I expected it to be – it was delicious! I am a convert!

After lunch we walked over to Abney Park Cemetery. It is the only place I have been to in London which is absolutely silent apart from the occasional chirp of a bird overhead and the whispering of the many leaves.

I usually find cemeteries quite sad and haunting, but Abney Cemetery is incredibly peaceful. The moss covered tombstones that line your path feel like old friends, greeting you as you pass by under the watchful eyes of the hosts of angels. It feels like you have stepped out of London and into their realm. On another path a giant lion slumbers and his form is so lifelike, you find yourself tiptoeing past so as not to wake him. The path forks in two and I’m irresistibly drawn to the wilder path, a tunnel that glows green as the light filters through in the leaves. It brings to mind the poem by Robert Frost, The Road Not Taken:

Two roads diverged in a wood, and I,
I took the one less travelled by,
And that has made all the difference.

Stepping out of the cemetery and onto the busy London roads felt a bit like waking up from a dream.

We cycled up past Stamford Hill to Warwick Reservoir desperate for a little swim only to discover that the reservoirs are all fenced off and that swimming is strictly not allowed! So we doubled back on ourselves and cycled through Lee Valley Park and Walthamstow marshes until we joined the canal then followed it as far as we could go.

We stopped off once for a drink in a pub along the way. It was a very cute pub, pity I have forgotten the name really. At one point we cycled past a very interesting looking mill building, so stopped to have a peek inside. To our horror we saw in one of the rooms ‘Don’t tell’ written on the wall in what looked like blood and a bloody handprint on the doorframe! Turns out the mill was a large film production studio and we were peeking into one of the sets. We carried on cycling past the Olympic Stadium in Stratford  and along the canal over charming little footbridges, past canal locks, stopping again to watch a Heron on the river bank standing perfectly still as it searched for fish and watching the river boat folk enjoying the summer day. An ice cream break was definitely needed as we reached Bow and we picked up 2 lollies – a fruit pastille lolly which melted so fast I got it all over my face and hands; and a magnum stolen kisses apple pie (highly recommended!)

Once we passed Poplar it took us quite some time to figure out how to get into Canary Wharf as the usual bridge was closed! When we finally made it we strolled into Cabot Square to find people playing in the giant fountain at the centre of the square! A few seconds later I had joined them and after much persuading he joined me too. He wanted to buy a bottle of champagne from Iberico la Terraza (the nearby restaurant) to drink in the fountain but we realised they probably didn’t have a licence to sell bottles. 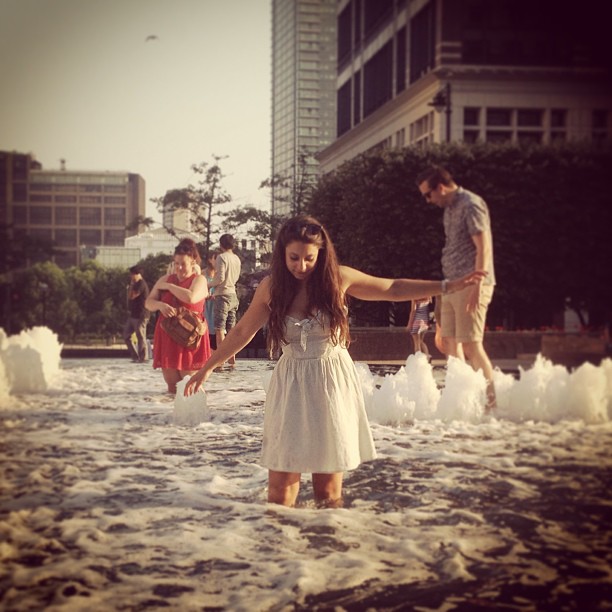 After a small detour into an unexpected Tour de France party where the little Brompton received many compliments we descended into the freezing tunnel and crossed over to Greenwich under the Thames – a very exciting experience!

We decided on Bianco 43 for dinner – a little Italian restaurant that is totally white, inside and out with cute wooden tables and brightly coloured hand painted plates. It is now my second favourite Italian restaurant in London (after 327 Caledonian Road). He ordered a pizza which was very, very good and I had a big bowl of spaghetti alle vongole garnished with a tiger prawn. It’s one of the tastiest Italian dishes I know so i’ll include a simple recipe!

Best way to make this meal is with fresh pasta, which is very easy to make and pretty easy to come across in supermarkets too! Cook the pasta in boiling water. In the meantime chop the parsely and garlic and crumble the dried red chillies.

In a second large pan add some oil and when it is hot add the chopped garlic, salt, pepper and dried chillies. When the garlic starts to brown, add in the clams and pour in the white wine. Put the lid on the pan, shake it up so nothing sticks and let them cook for around 5 minutes, shaking the pan every now and then until all the clams have opened. Remove any clams that haven’t opened.

Drain the pasta once it’s cooked and add it in to the pan of clams stirring it all together. Serve into a bowl and sprinkle the parsley on top.

Note: some people like to use chopped tomatoes in this dish, this version is known as spaghetti alle vongole in rosso (as opposed to in bianco) and is more common in the south of Italy. 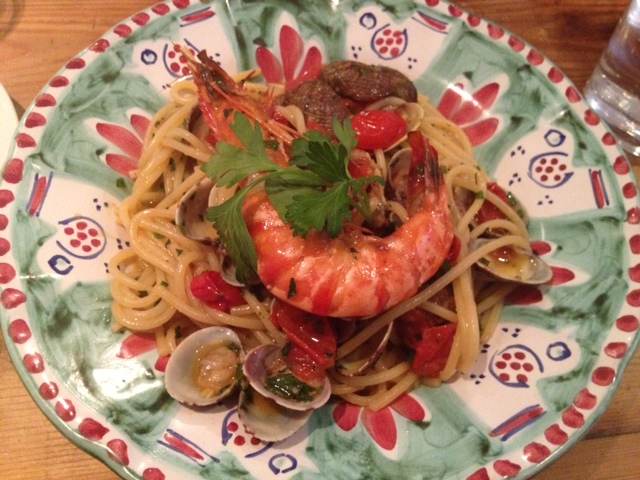 After dinner we sat in Greenwich Park and watched the sunset.