A trip to the far away borough of Croydon to be fed hot food brimming with exotic spices, to sip juice that whisks you off to a tropical land and to be serenaded by softly sung Swahili songs is an absolute must and is definitely good for the soul!

I first heard of Dos Santos Foods when searching for Goan Sausages in London, which I have ordered quite a few times now, but I didn’t realise until recently that this little family run business also organises supper clubs once a month at their unit in Croydon. 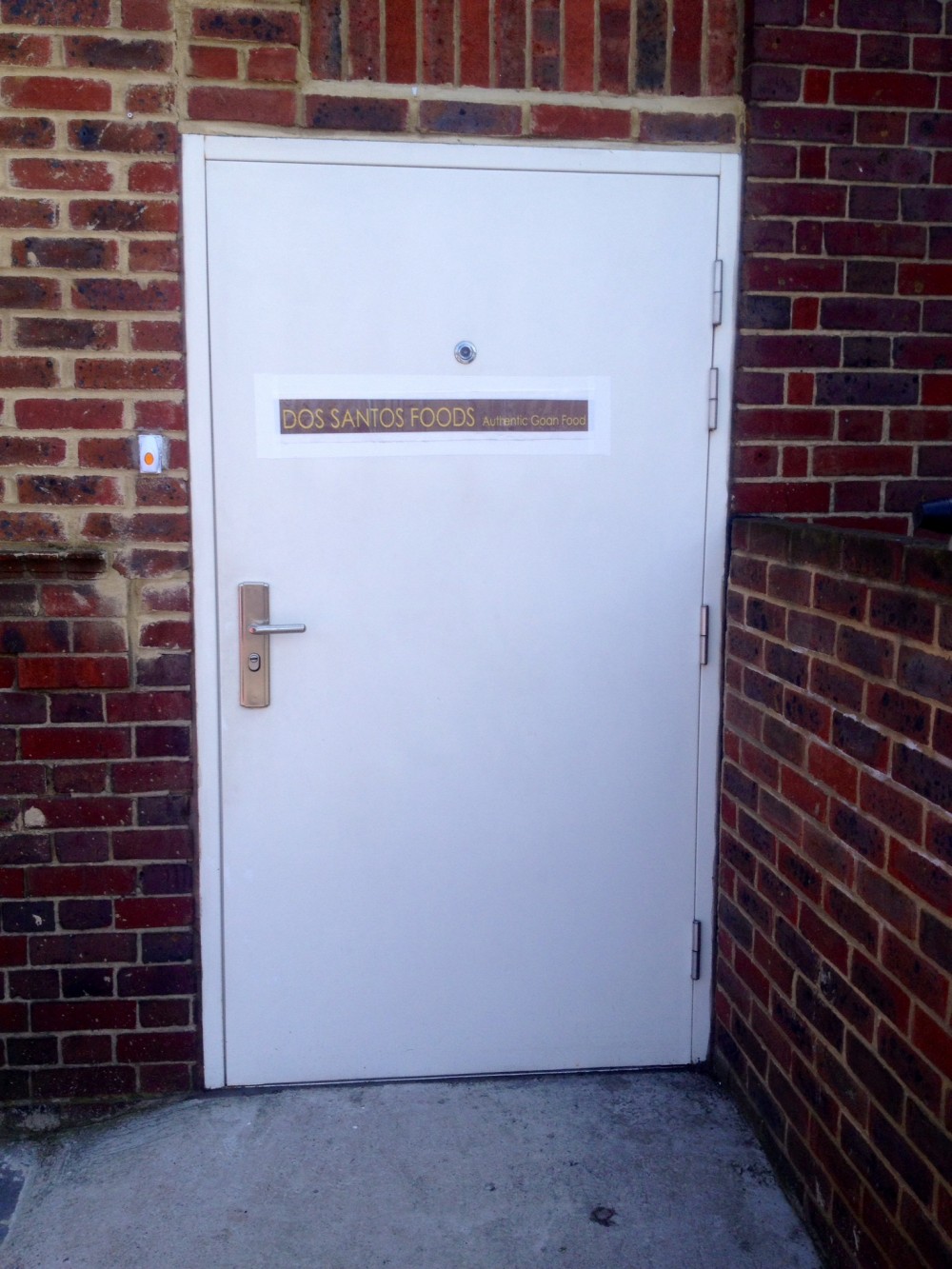 There may be nothing more than a small sign on a plain white door, but sometimes that is all you need. After all, I was there for the food, the friendly people and the music, not for the building that holds them all!

As soon as we sat down at the table, we were offered generous glasses of mango juice mixed with fresh coconut water – perhaps one of the best mixes I have ever had! As a dedicated juice fan, I cant believe I hadn’t tried this combination earlier.

On the table was a small bowl of ‘coconut bacon’ – the name may sound jarring – coconut and bacon?! But it’s not just pork flavoured coconut – instead, the dried coconut chips have smoked spices added to create a truly moreish snack. I found myself absent mindedly scoffing these down , they are much better (tastier and healthier) than crisps or popcorn in my opinion. 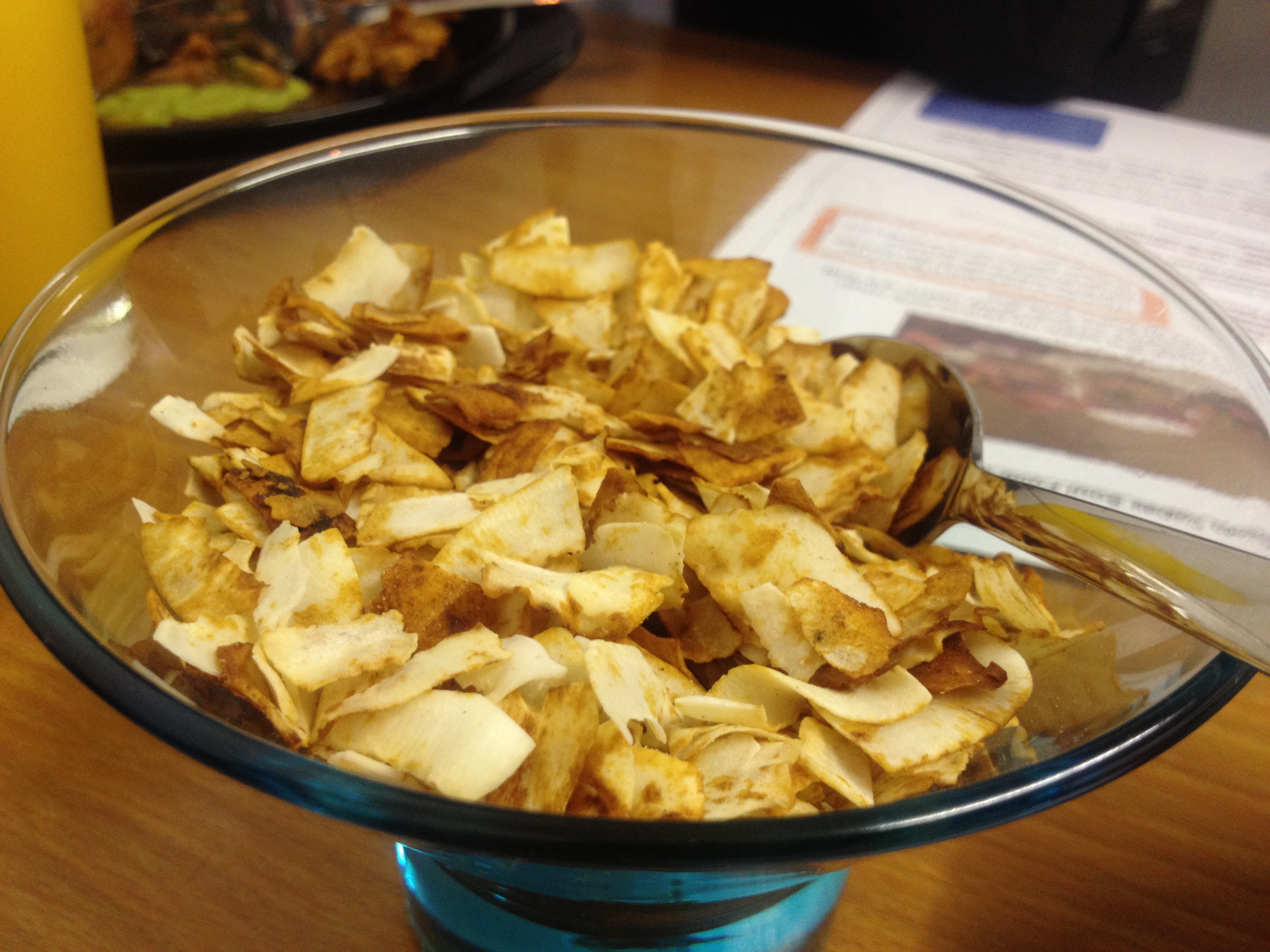 The ‘Goan Soul Food Experience‘ had a long and very exciting menu! I had been looking forward to the event all week and it didn’t disappoint!

All of the starters were very good, but the one that really stood out for me was the Goan Sausage Potato chop – this was just a mashed potato and goan sausage ball that had been fried – how could you go wrong with that! All of my favourite things together! I’m certainly looking forward to trying to make some at home. 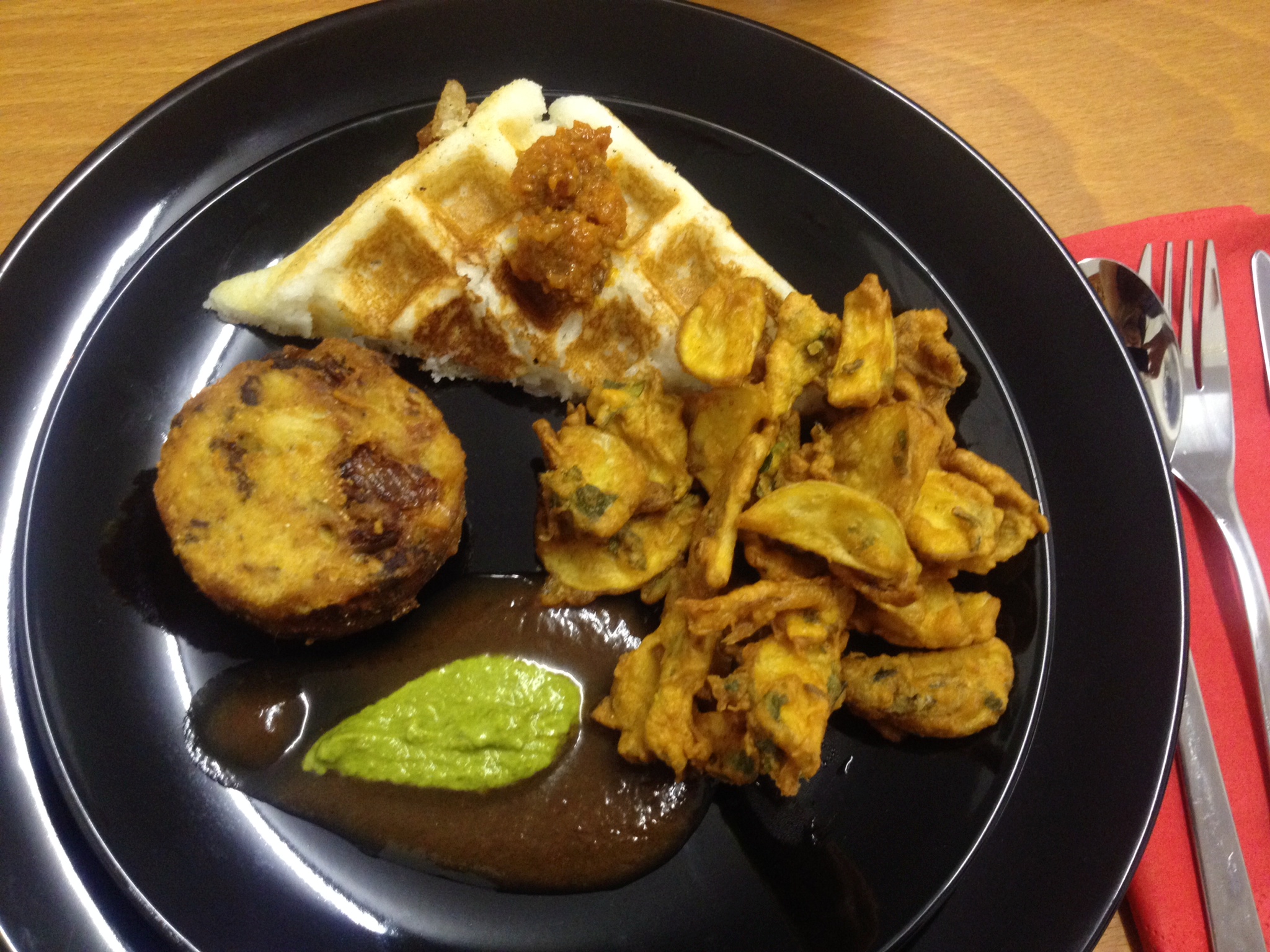 Starters, left to right: sausage potato chop, sanna with prawn balchao, potato and coriander bhajia and tamarind chutney with mint and coriander chutney in the centre

I was already almost full after the plate full of starters, and then bowl after bowl full of food started coming out until the table was pretty much overflowing with food! It was a veritable feast and I was so very happy to be there. 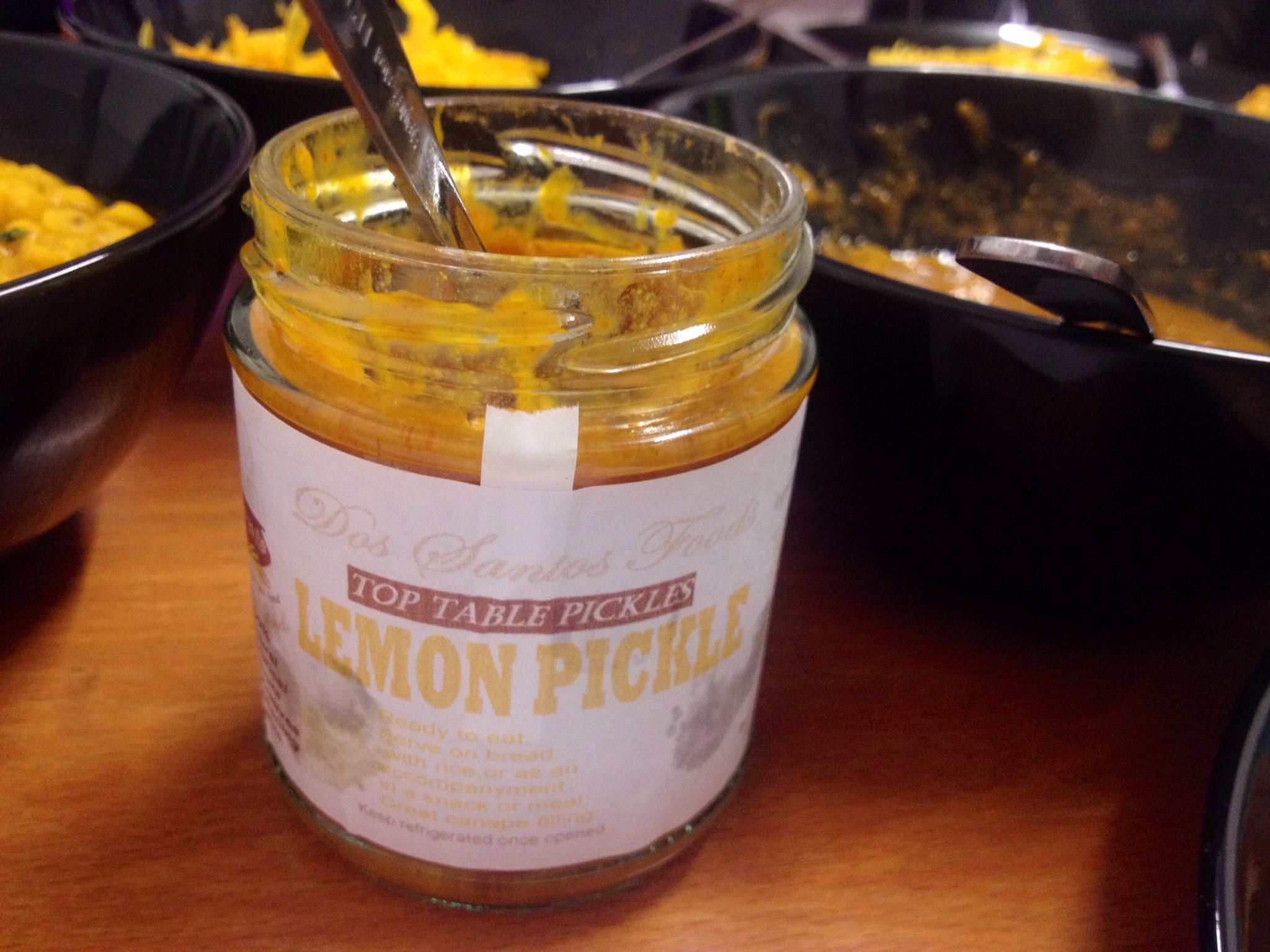 On the table along with all the food were two jars of homemade pickle – lemon and sun dried tomato. Despite not being a huge lover of Indian pickles, I had a little taste and it was actually very nice. All the pickles that they make can be bought online and also include carrot, coriander, prawn balchao and tendli.

My favourite main course by far was the chicken xacuti – a traditional Goan dish that is very complex to make and requires a million ingredients (well… maybe just 16 spices) including aniseed, poppy seed and mace flower as well as a hefty dose of coconut. The result is a heavily fragrant and peppery curry with a wonderful texture. My mouth is watering just thinking about it. 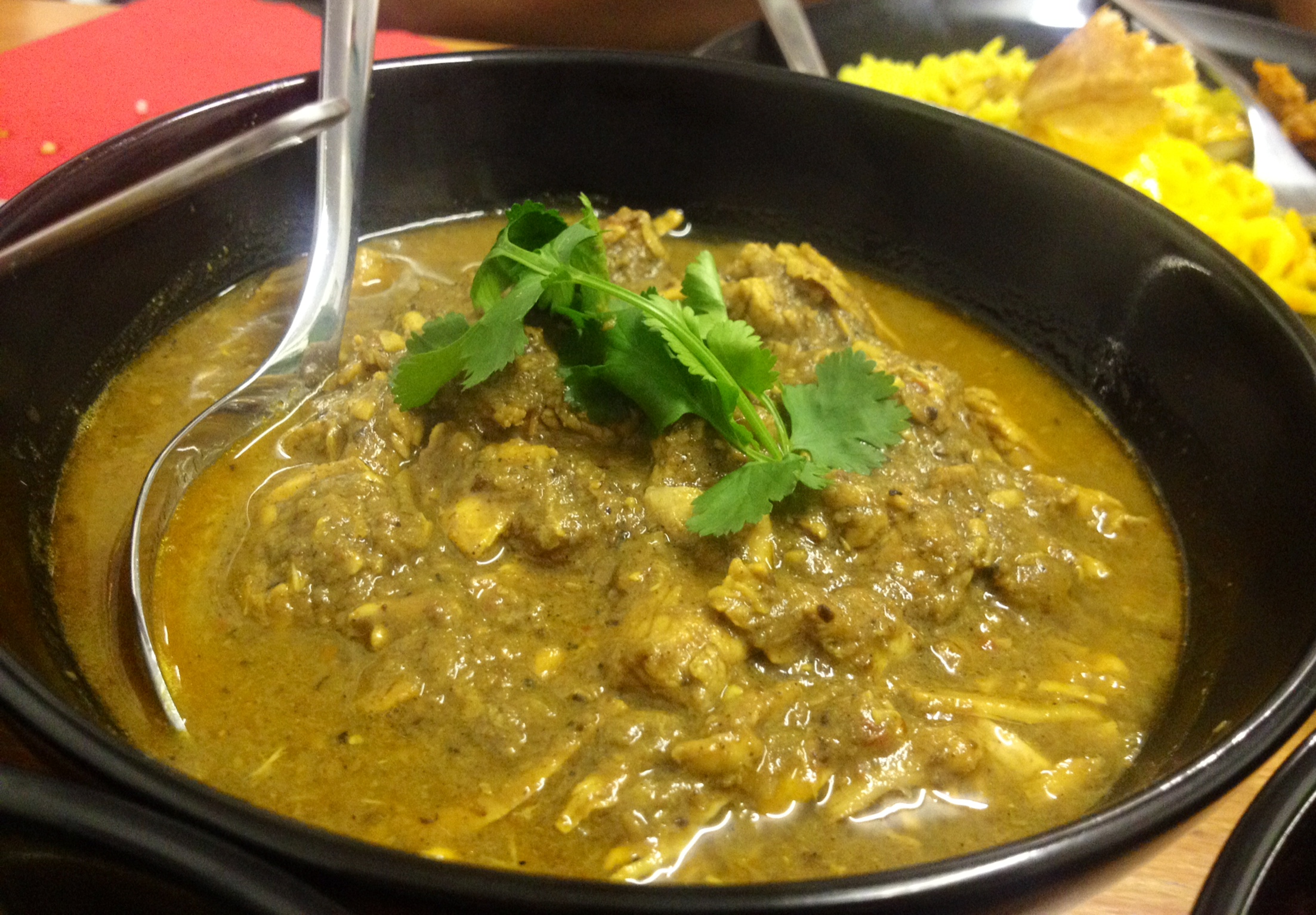 Some of the dishes were a little cold after sitting out on the table for a while, so my little insider tip is that there is a microwave around the corner that you can always use to heat up your plate if you feel it is affecting the experience of the meal. Some people absolutely hate eating cold food, others don’t mind. I usually don’t mind, as long as the food is tasty enough, as sometimes the heat detracts from the flavour.

While I was taking a breath between courses and summoning the mental strength to face the much anticipated dessert on an increasingly full stomach, I took the time to have a little look around the room. The bare white walls were adorned with a mixture of Indian flags, African fabric paintings and Portuguese crockery. It made me think a little about the mix of cultures represented in the food I was eating. Alex’s family are from Goa originally where the cuisine is inspired by Indian, Portuguese and Mozambican food, however they moved to Kenya before finally moving to London. The time spent in Africa must have left a strong imprint on both the family and the food! 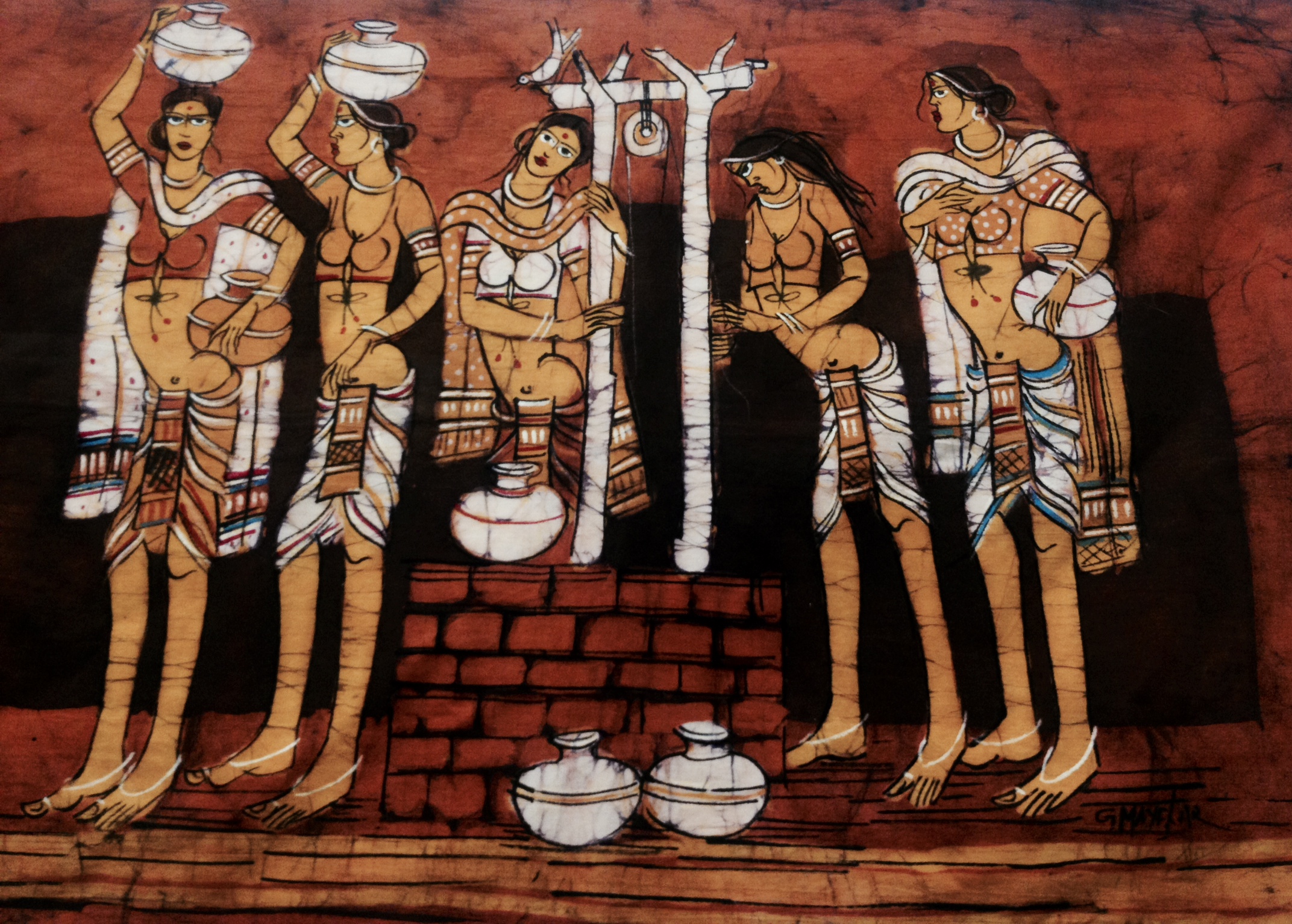 Decorations on the wall

The dessert was incredible! I loved bebinca the first time I tried it in a tiny Goan restaurant on the winding streets of Lisbon, I’ve always been too daunted to actually make it myself so I was anxious to see whether it was as delicious as I remembered. It was. The dense coconut pudding is traditionally made of 7 layers, each baked individually so it can take hours (and a lot of patience) to complete!

The bebinca was perfectly complemented by the cardamom ice cream, a light and very subtle flavour. I probably could have handled a much stronger version however I love to be overwhelmed by flavour and must continually remind myself that not everyone feels the same way, especially people who are unused to strong Indian flavours such as cardamom! I didn’t quite manage to finish all 3 pieces – the portions throughout the meal are really very generous. In retrospect I wish that I had wrapped up the bebinca in a napkin to take home instead of letting my enthusiastic boyfriend wolf it down! 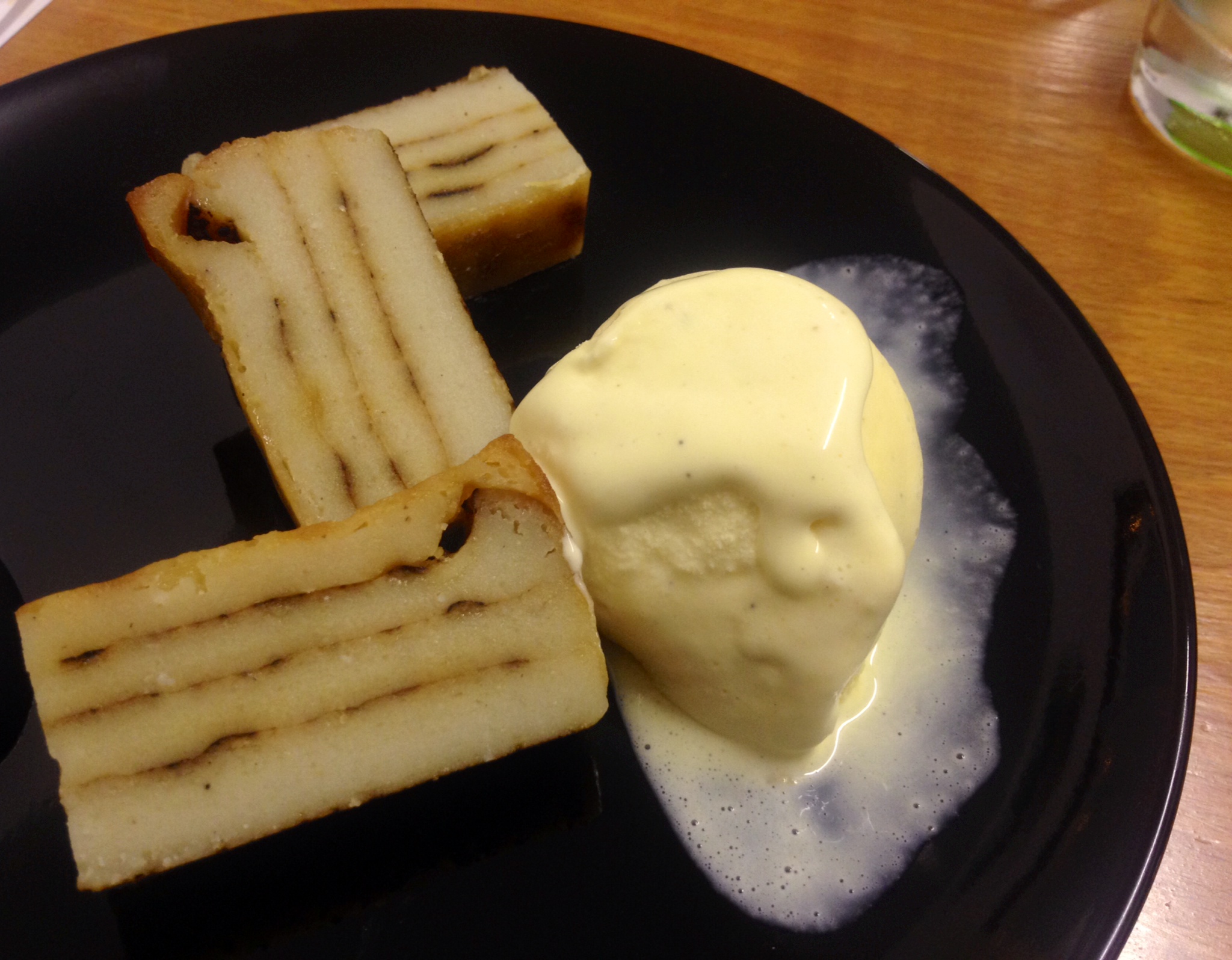 After the delicious meal, we spent quite a while chatting to Alex (and singing him happy birthday!) We bought some Goan sausages to take home to cook and he was kind enough to give us some alternative Goan sausage recipes. So far I have only ever had them the way my wonderful mother makes them, which is with potato and tomato and onions in a sort of saucy fry-up. However I really loved the Goan sausage and potato chops so I would definitely like to experiment more with different recipes! Some of these Goa sausage recipes can also be found on the website. 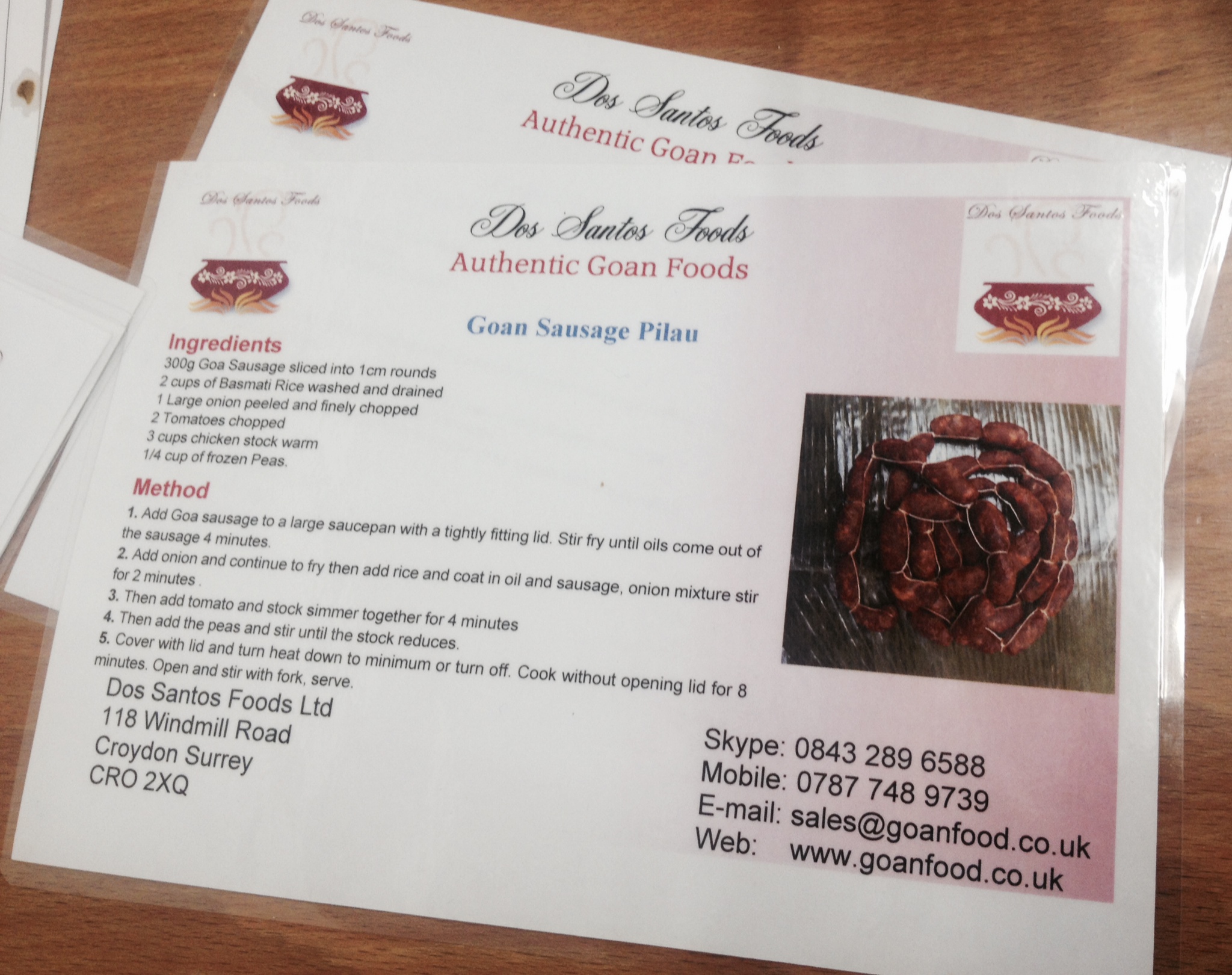 The unit in Croydon not only packages up and posts out all of its products, from a portion of chicken Xacuti, to heavy bottles of pickle, everything is available online. However I have always been a bit old fashioned in this respect and prefer to visit a place, chat to the people who know the most about the products before deciding what to buy! However, if you do want to drop in to the store, make sure to let Alex know in advance as he may be out at a market! 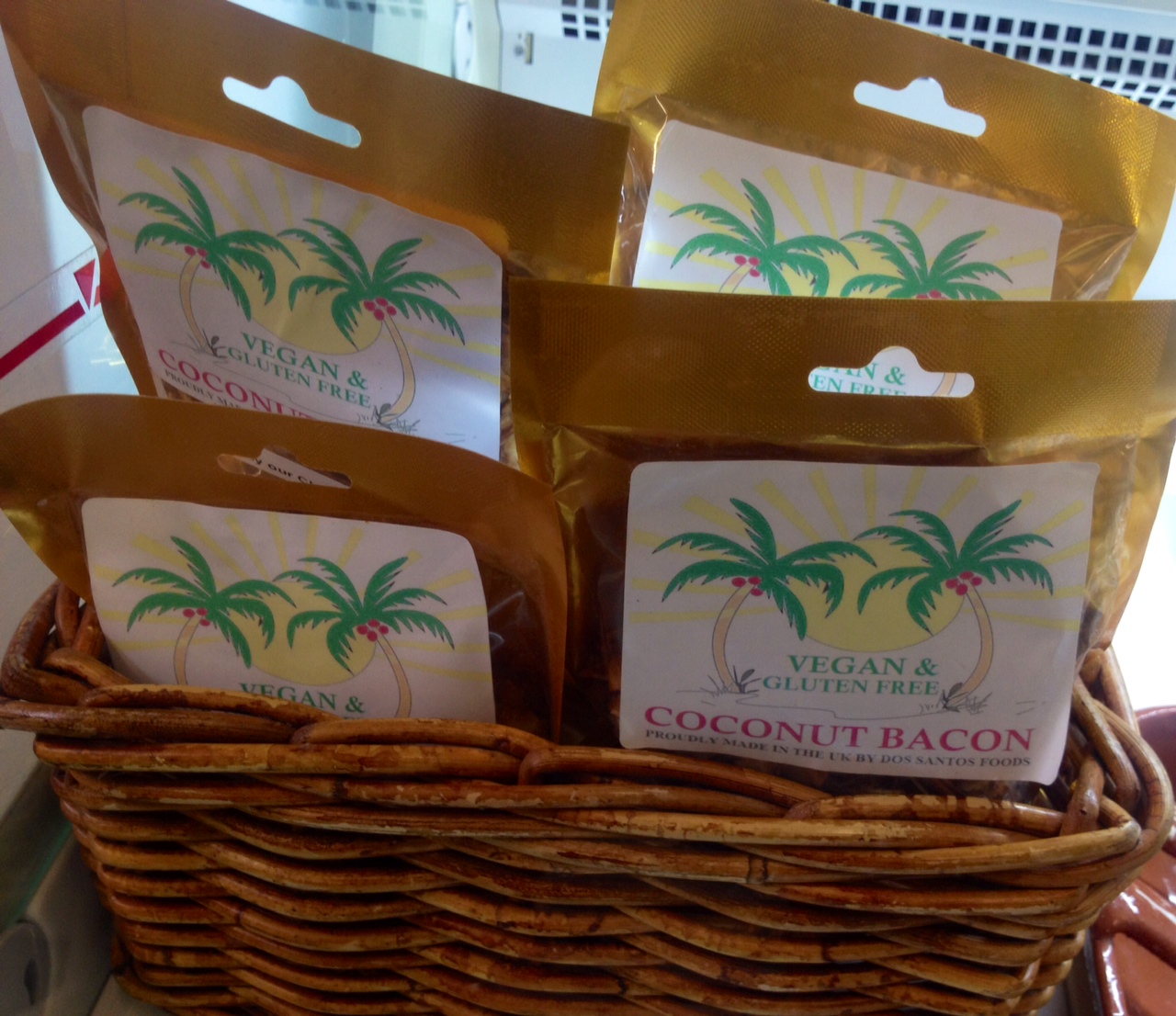 Coconut bacon on sale at the store

We were lucky enough to receive a little tour of the premises after the meal by Alex himself. The sausages are made from scratch on the premises using Alex’s grandmothers recipe, handed down through the generations. The pork is sourced from RSPCA approved Suffolk farms and the spices mixed in are ground in the traditional way using a stone at the Croydon unit.

Apart from the kitchens, there is also a smoker, a room to air dry the sausages and a number of walk in freezers. The traditional way of preserving the sausages without refrigeration means that they have a shelf life of over 8 months making Goa sausages an incredibly useful ingredient to have in the house! 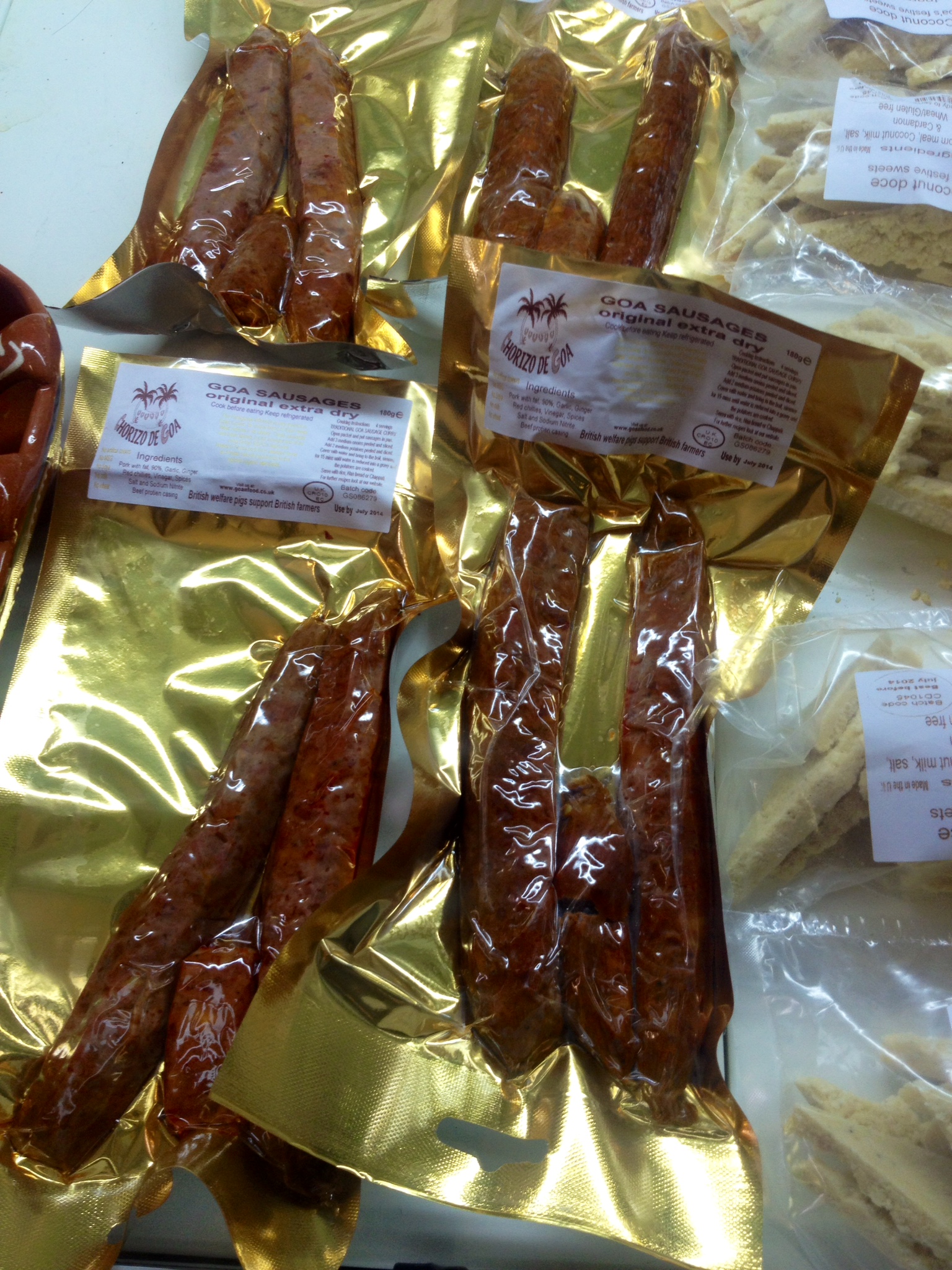 Alex was kind enough to even pose for a photo with a tray of his freshly made sannas. I mentioned sannas earlier on when describing the menu however I only touched on them. I had never actually heard of sannas before, but they are another Goan speciality – a steamed bread made from rice, fresh coconut, salt, sugar, and yeast – an alternate version of an idli. Traditionally the sannas in Goa are made from toddy, the sap from the coconut palm with is left to ferment and thus used as the raising agent to make the sannas so fluffy!

Having recently taken my gluten intolerant friend out for Thai food, I never knew how hard it is to find gluten free food! The sannas are wheat, dairy and gluten free and for the first time I actually can appreciate that! 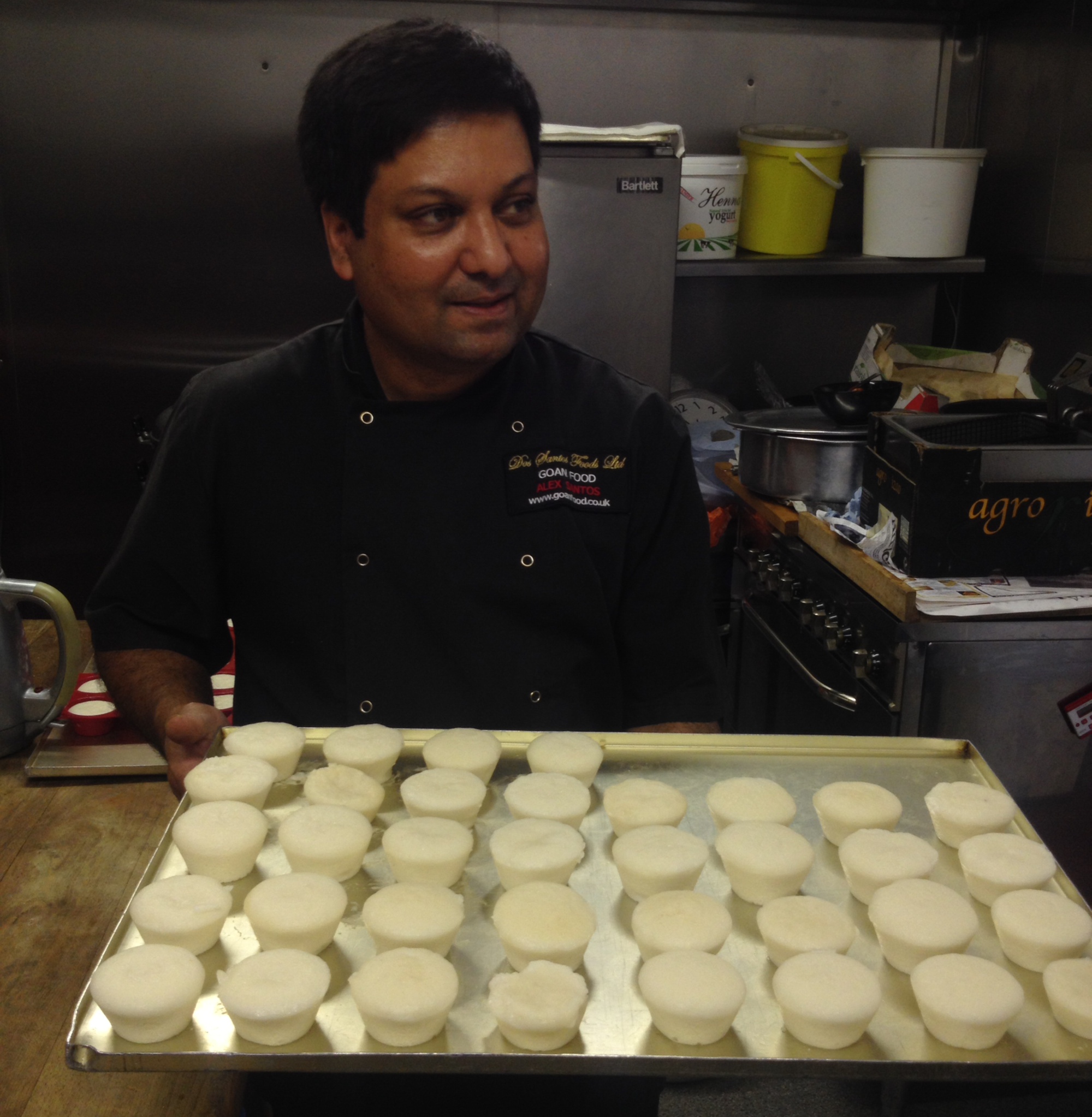 Alex Dos Santos with a tray full of Sannas

Alex’s delicious food hasn’t gone unnoticed – he was featured on BBC programme ‘Indian Food Made Easy‘ and his sausages have won awards. I am sure it is only a matter of time before Dos Santos is a household name and queues start forming to eat at his little place! He and his family provide authentic and delicious food which comes with a personal touch that is missing in so many other places. I will definitely be back!