We met up for lunch and wandered to Neal’s Yard. It one of the prettiest places I know in central London – a tiny courtyard which is quite difficult to find, tucked away behind the bustling tourist streets of Covent Garden. Inside feels like a mecca of tranquillity. The brightly painted houses – pink, yellow, blue – immediately raise your spirits and the shops and cafes inside reflect that feeling. The Wild Juicery, salad bars, organic whole food stores selling fresh coconuts and giant, succulent aloe vera leaves are joined by massage parlours and a herbal remedies store. A new addition to this medley is Homeslice Pizza – it opened only 5 months ago and looks like it would be more at home in Shoreditch or Brixton Village than Covent Garden, which is usually so devoid of individuality these days! The pizza was pretty good (huge slice for £4) – I had to wait a few minutes as mine was still cooking in the giant wood burning oven but the very friendly staff and the industrial warehouse décor made for a pleasant place to wait! 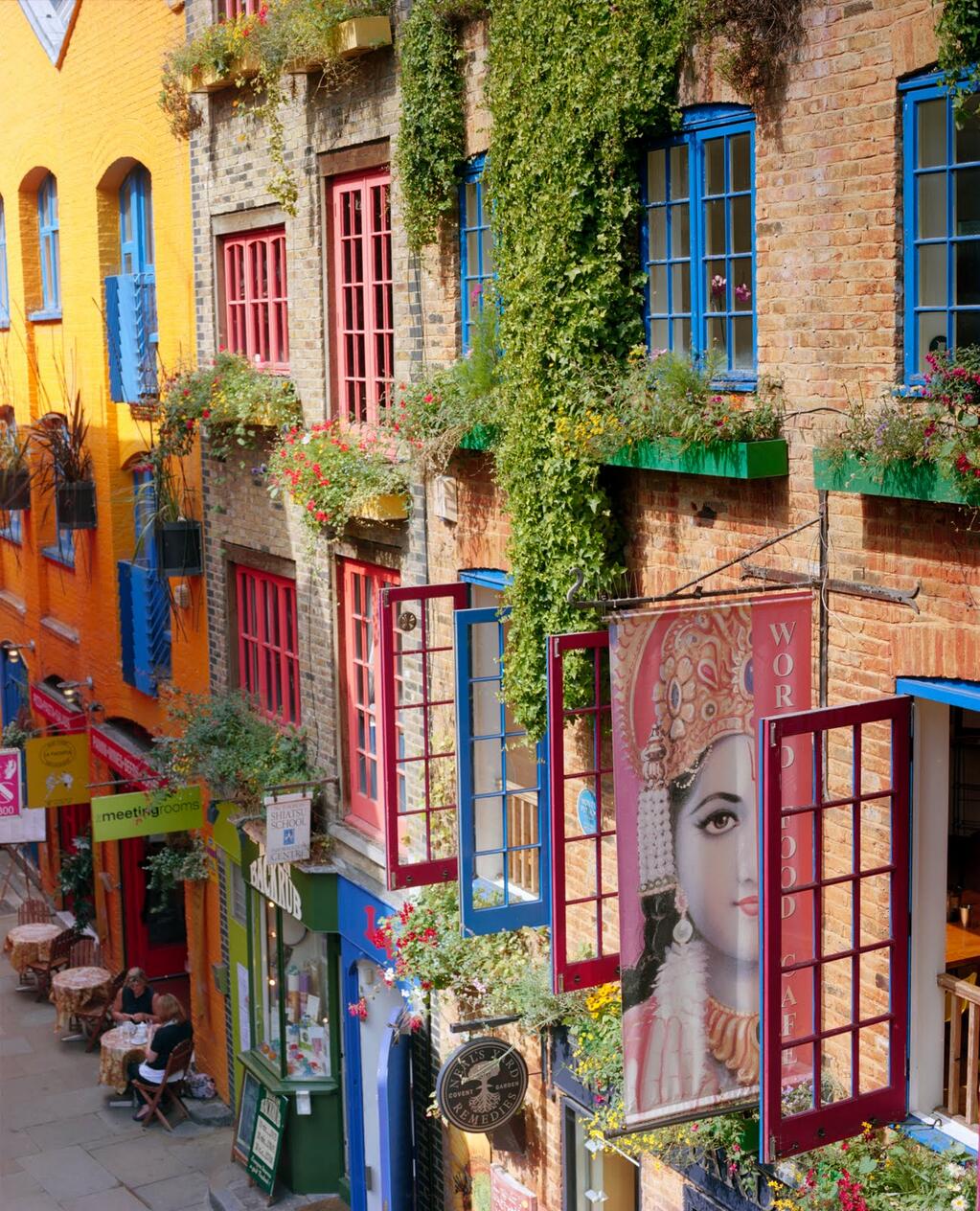 I took my slice of pizza outside to sit on one of the little benches in the sun – for the next 30 minutes I felt like I was in a village in Sardinia, not in London!

We bought a bar of raw chocolate from the juice bar for the walk back to work. I was a bit sceptical at first as it had no added sugar – just some goji berries and sunflower seeds, but it was delicious! Really hit the chocolate spot, I actually ended up licking the wrapper (it was more like a paste consistency than an actual ‘bar’).

After work we agreed to walk back to mine along the river front, to make the most of the sunshine. When we got down to Temple, we noticed that the Thames was incredibly low so we decided to walk along the actual bank of the river and thus embarked on what can only be descibed as an adventure! 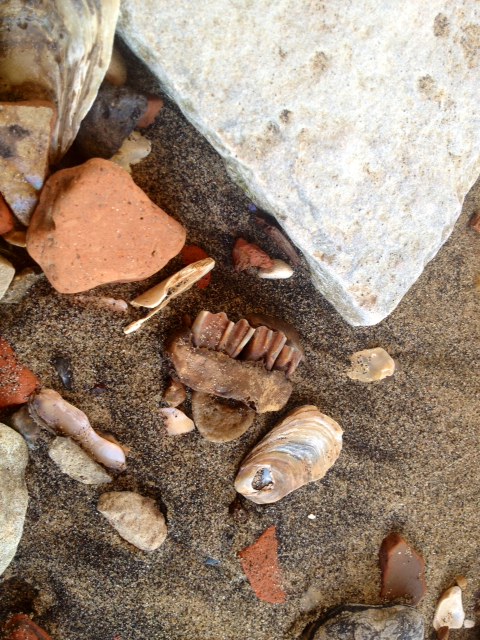 The river bank is made up of 40% pebbles, 20% terracotta tiles, 20% bones, 10% clay pipe stems and 10% unknown (and i’m not sure I want to know!) ‘Bones?’ you may say – and the answer is yes! There are hundreds and hundreds of giant bones in the Thames. At first our imaginations ran riot, helped no doubt by the fact that we had been watching Eastern Promises the day before. However a friendly wader (someone in London runs trips for interested poeple to go and hunt for medieval tiles in the Thames – only in England!) informed us that in the 19th century, butchers used to dump cow and other animal carcasses into the water. Pretty disgusting, but slightly better than what we were imagining. 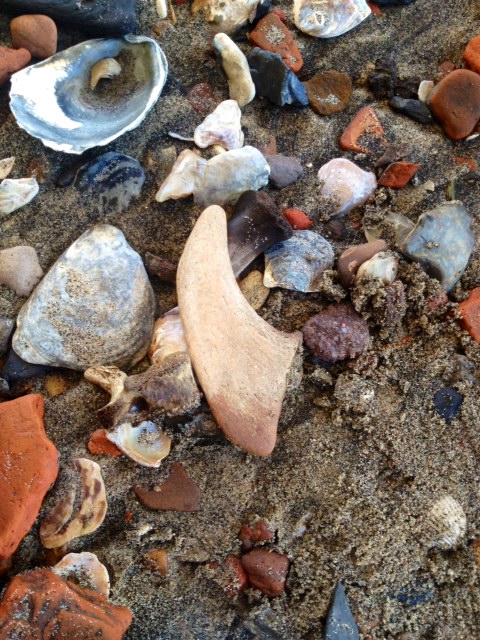 Not really sure what this is?!

We wandered along the bank, slipping and sliding over areas where the rocks were covered in wet algae, walking under bridges through passes that were so shady looking, they must be frequented by drug dealers. At one point the path was so narrow we had to walk right up against the algae covered wall, holding onto an old metal chain for safety. I can’t tell you how grimy I was at the end of this trip!

When we could walk no further (the bank was completely submerged in water) and we realised the tide was rising quite rapidly, we doubled back to the most recent ladder. There are ladders at regular intervals along the Thames, however the wide, stone steps are much harder to come by! We agreed to risk the ladder, despite the thin and very rusty looking rungs. It was just our luck that at the top of the ladder was a very swanky looking bar with a lot of people milling around outside, smartly dressed in suits and pretty dresses. The look on their faces as 2 rather normal-looking people popped up from what they must have thought was a pretty huge drop, was priceless!

It was definitely an adventure to remember 🙂

We walked back along Brick Lane and stopped off at Ambala Sweets to pick up a couple of potato chops (batata wadas) and samosas to take the edge off our hunger. 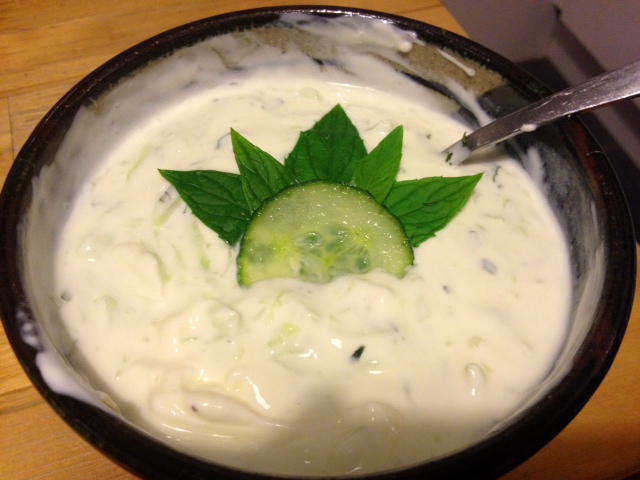 For dinner we made stuffed red peppers with roasted aubergines, courgettes and cherry toamtoes, some couscous with lemon, mint and coriander and tzatziki. The peppers should have some feta crumbled on top before you put them in the oven as it gives it a delicious salty flavour, but we forgot the feta! Sad times.

Tzatziki is such an easy dip to make, I honestly dont know why people dont make it all the time!

Just spoon out some Greek yoghurt into a bowl, grate half a cucumber into it, squeeze (or finely chop) half a clove of garlic in and finally add some chopped mint! Done! 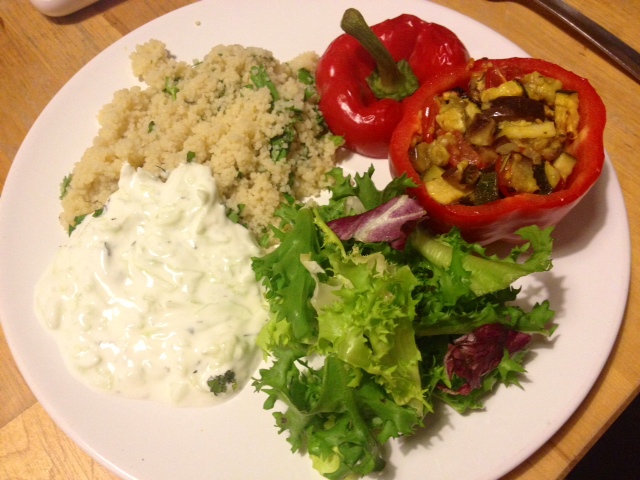