During the last weeks of summer (1st August – 1st September), South West Trains did a special ‘summer fever’ rail discount – all day return tickets were just £15! I often forget that tourism in your own country can be so much fun, i’m always so desperate to get away from cold, grey, manic London, but with the right companions there are some truly wonderful weekend (or day) trips to be had!

In one week I made two trips to the hitherto unknown south coast of England.

This took a lot of thought as there were so many options on the train route – Bournemouth, Portsmouth, Weymouth, Lymington Spa – everyone gave me a different opinion! We ended up taking the train bright and early from Waterloo to Poole. It was a pretty town to walk through, though walk through it was all we did. I was struck by the ageing population and the incredibly high number of charity and pound shops (we couldn’t resist seeing what was inside though)! 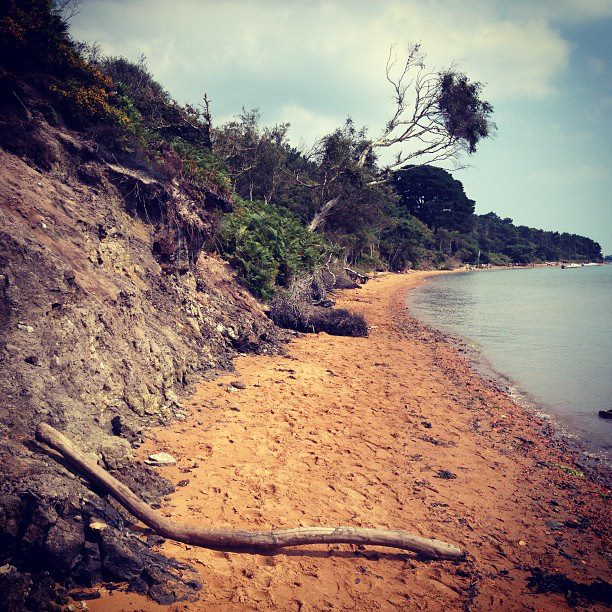 We bought our boat tickets from a little yellow hut on the seafront and very soon were on our way to Brownsea Island! I sometimes get a bit sea sick on slow moving boats so spent the whole ride with my head out the window like an overly enthusiastic dog. It was a beautiful day: the water was shimmering as the sunlight danced over the rippling waves.

Brownsea Island is run by the national trust (entrance is £6 and well worth it) – it is perhaps most famous for being the location of the first Boy Scouts camp and many many more camping holidays subsequently, I can scarcely imagine how exciting it must be for young children to visit! It is an incredibly beautiful island that you can easily walk around in a couple of hours (more if you want to stop at any point and just enjoy life).

It doesn’t really feel like you’re in England with the deep golden sand, dark grey clay, prehistoric looking ferns, and perfectly clear water, revealing soft round pebbles beneath. I couldn’t resist taking my shoes off to walk along the empty beach, at times enjoying feeling the squelch of clay between my toes. 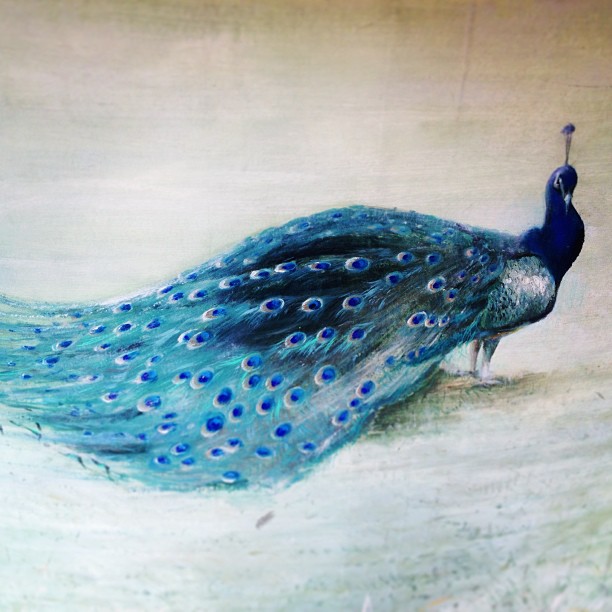 Another curious aspect of the island is the sheer number of peacocks that roam freely on the island. They are very tame, will come right up to you if you have food and take it from your hand! I got a bit scared as they can come across as somewhat aggressive in their eagerness for food – I recommend admiring them from a distance instead! The peacocks are the most photographed for their virulent blue and green plumage. Meanwhile the peahens and baby chicks runs around happily – unbothered by the visitors.

On one side of the island, a large clearing is flooded in a blush of heather. I had the strongest urge to canter bareback on a wild horse through the field, the tips of the heather flowers brushing against bare legs. However no horses were to be found so I made do with just walking around alone, watching the butterflies flit to and fro while everything else remained reassuringly still. The whole island had such an Enid Blyton feel about it. The Famous Five were always using heather for bedding and I was very close to laying down too before I was quickly whisked off by my friends who didn’t want to miss the boat. 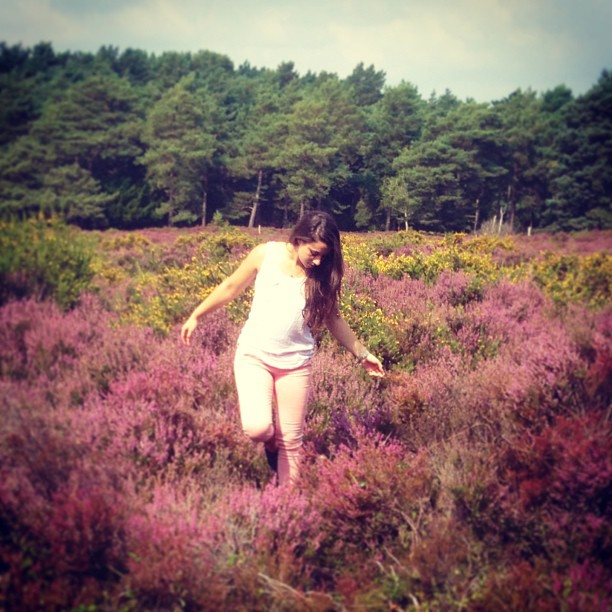 After we had sated our thirst for Island life we took another ferry to Sandbanks and waited for the chain crossing to Studland. While waiting, we befriended a very enthusiastic cockapoo puppy (cocker spaniel crossed with a poodle) who had come to the seaside with his owners and was obviously loving the salty air. Dogs have so much joy for life.

Studland is also owned/run by the National Trust – a beautiful wild beach framed by grassy dunes. It was a lot busier than the island but big enough for everyone. One large group of friends and family were having a huge BBQ which smelled amazing. I was half tempted to go and beg for food but we made do with mini milks instead. After a wander down the tiny paths beyond the dunes to change into my swim wear (getting horribly prickled by the dune grass – that stuff is sharp!), I was persuaded to go for a little dip which ended up as quite a long and lazy swim. I never would have thought that i’d be swimming in the sea in England in September but there I was!

We missed the last boat but luckily there was an alternative from Sandbanks – a really lovely journey in an open top bus along the sea front back to Poole. At this point, having only had a few picnic-y snacks, we were pretty hungry – we relied of a mix of local advice and tripadvisor tips to find our way to dinner.

We ended the day with fish and chips from Lakeside – the restaurant was a bit too smart for our sandy, sweaty selves so we got a (much cheaper) takeout from the back of the restaurant and then sat on a bench by the side of the sea and watched the sunset. 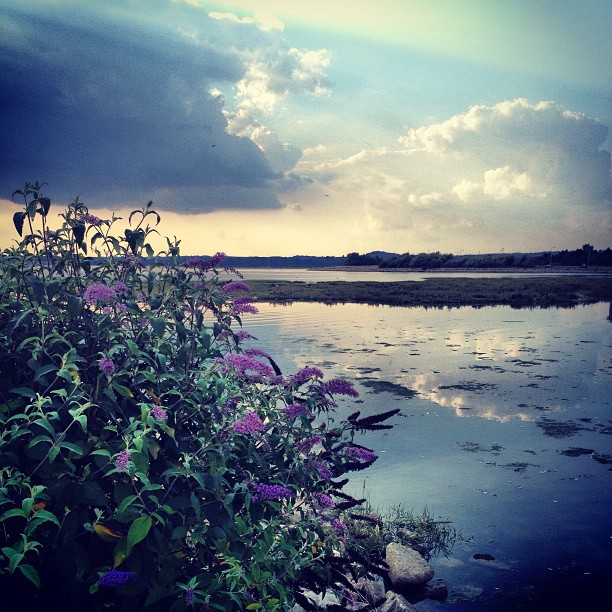 Fish and chips with a view!

While the first trip was a big group excursion, the second time round we decided on a romantic little trip for two to Lulworth Cove. Both trips were unbelievable but for me this one completely outshone the first.

Lulworth Cove and Durdle Door are situated on an incredibly stunning stretch of coastline and are both pretty easy to get to. The train from Waterloo Station goes to a tiny little place called Wool from where a local bus service runs you down to Lulworth Cove. The journey itself is very pretty: driving round winding country lanes, past little thatched cottages and friendly looking pubs and finally arriving at a collection of fishermens houses set beside the sea and straddling a gurgling stream.

The village/hamlet (what is the word for a collection of 10 or so houses?) was so enchanting that we put aside running down to the sea for the moment and wandered around instead, finally ending up at a blue fishermans house for an afternoon cream tea. I can’t remember what it was called – if it even had a name – but you can’t miss it, it has an unusual shape and sells homemade fudge! 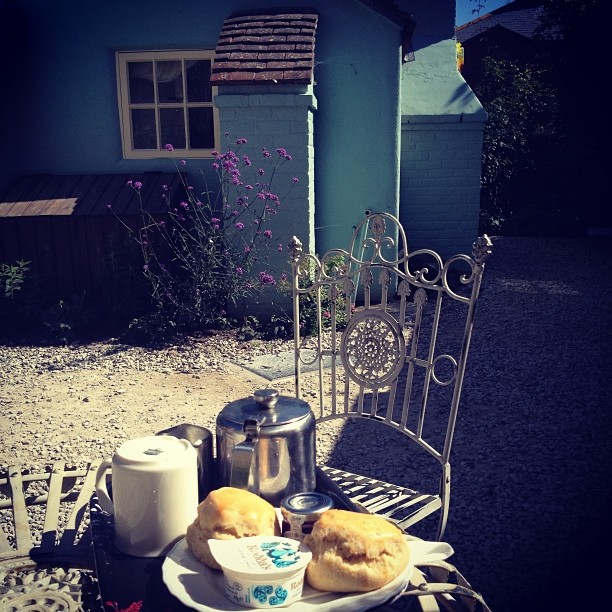 The village was buzzing – local people, visitors and… dogs! This was clearly dog country! After stopping many times to stroke dogs of all shapes and sizes we finally made it down to the Cove – a perfectly circular inlet with very clear water. It was filled with swimmers and boats so, as pretty as it was, we skipped it and walked to Durdle Door instead which I would strongly recommend! The walk is not long, maybe 30 – 40 minutes and not too steep. When you reach the top of the cliffs the view along the coast is breathtaking – as cliche as that sounds! I have never been anywhere that made me feel so free: on one sides miles and miles of open sea and on the other, grassy rolling hills.

Durdle Door itself is a rock formation which resembles an archway – most of the visitors had stopped there to rest and swim so we walked on as far as we could till we were almost alone, then tiptoed into the bright water for some serious swimming. We swam all the way out to some big rocks, dried out in the sun then risked our necks (legs) by jumping into the unknown.

I can’t remember the last time I smiled so much. 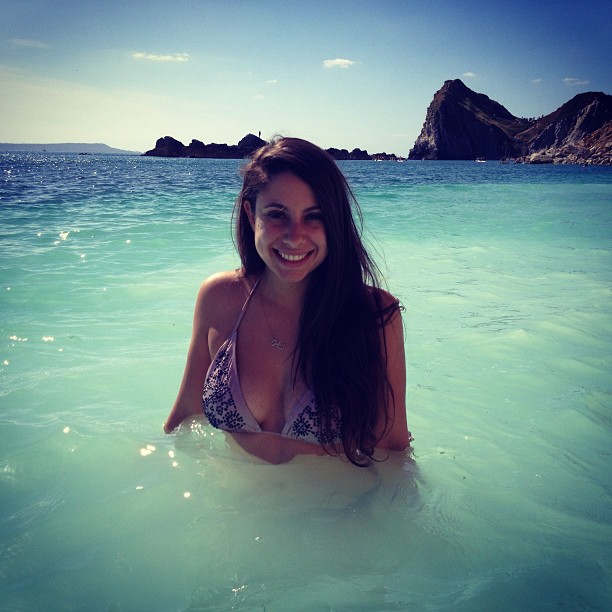 We walked back from the beach via a different path, a path less trodden, which was very exciting but also somewhat dangerous. We slipped and slid over the silky dune grass and battled nettles and brambles – I fell over a fair few times! 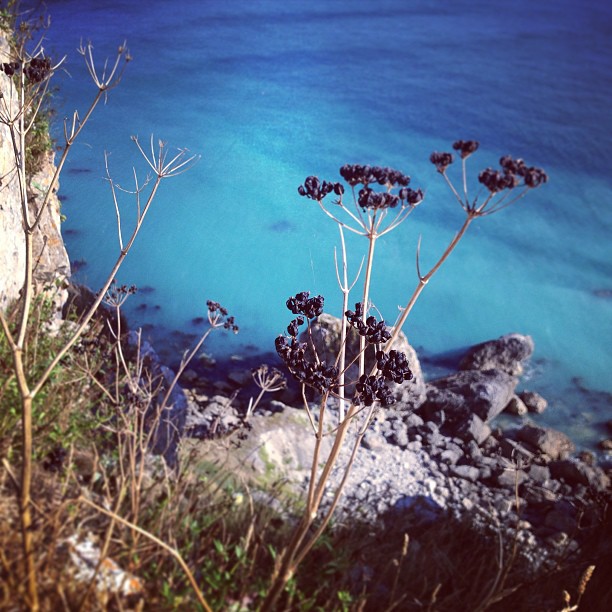 We asked in the tourist information session which the best restaurant was and they directed us to the Dandelion Cafe, however the menu was so unimaginative we didn’t even walk in. We then tried the Lulworth Cove Inn which had a lovely outside terrace – it seemed a pity to be indoors on such a beautiful day. We sat down and perused the menu – after 15 minutes I realised the only fish on the menu was either salmon skewers or smoked haddock with cheese (which sounded disgusting), both a little disappointing considering we were right next to the sea. We still hadn’t been served anything so walked out. We then checked Trip Advisor for the best restaurant in the area – they recommended Limestone which is part of a smart hotel so though it was a little further, we dutifully trundled over. The hotel was perched atop a little mound, the path that led to it zigzagged up the lawn which was lined with stone gnomes and lions. I felt a little bit sick but kept quiet as it was my complaining that meant we had left the first two places!

The menu (French food) inside looked really good – lots of fresh seafood, however the decor was horrendous. It felt like it has been redecorated the previous day by Habitat. Everything was the same neutral tones but it just felt very contrived and lacking in any character whatsoever.

Luckily the restaurant was fully booked! So we wandered back to the little village once more and ended up at a place called Bishops – a very unassuming place, so unassuming we had walked past it without a second glance!

We chose two mains and shared – crayfish and crab linguine with a spicy tomato sauce and fresh sea bass with a green vegetable and prawn risotto.

It felt like they had cooked the pasta in sea water it was so fresh and delicious! Definitely the best seafood I have had in the UK (I’m afraid red prawns in Sicily and black pepper snapper in Thailand are still winning the best seafood ever competition though).

I would recommend this restaurant, this village, this part of our lovely coast and shoreline over and over again – it was a magical day that I will never forget. 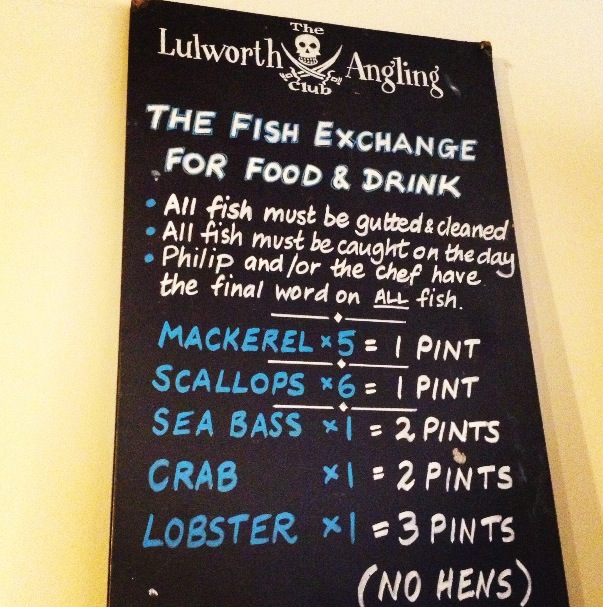