Macedonia is a beautiful and wild sun drenched country, filled with history and rich with culture and all of those elements are expressed in the food – a mix of different influences and a splash of deliciously ripe flavours. I thought I’d show you some of my favourite dishes in Macedonian cuisine, starting with breakfast of course!

Breakfasts in Macedonia are taken very seriously – arrive at the table with an elastic waistband is my best recommendation! Along with traditionally prepared coffee, juice, fresh, perfectly ripe fruit, bread and eggs, we were served traditional dishes, handmade by elder women in tiny villages near Ohrid.

This roasted red pepper and tomato relish is absolutely delicious! It’s served cold and best eaten with chunky slices of fresh bread and the white local cheese which is rather similar to feta. 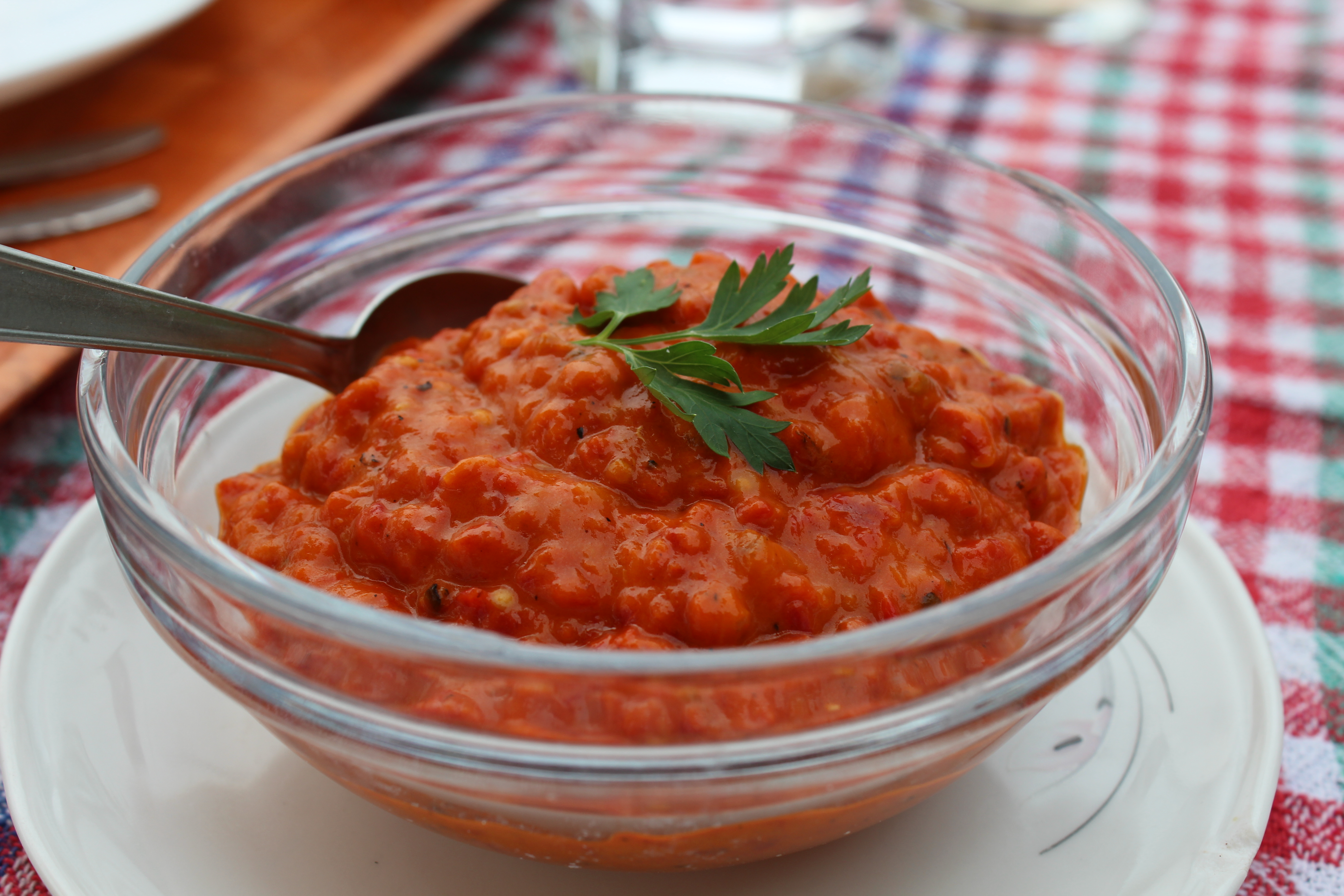 This dish is essentially a number of pancakes stacked on top of each other and baked to create a huge layered pancake. It reminded me a lot of a savoury bebinca – the sweet Goan dessert, but had a smoky grilled flavour instead. This dish is really heavy so make sure you have someone to share it with is my advice! 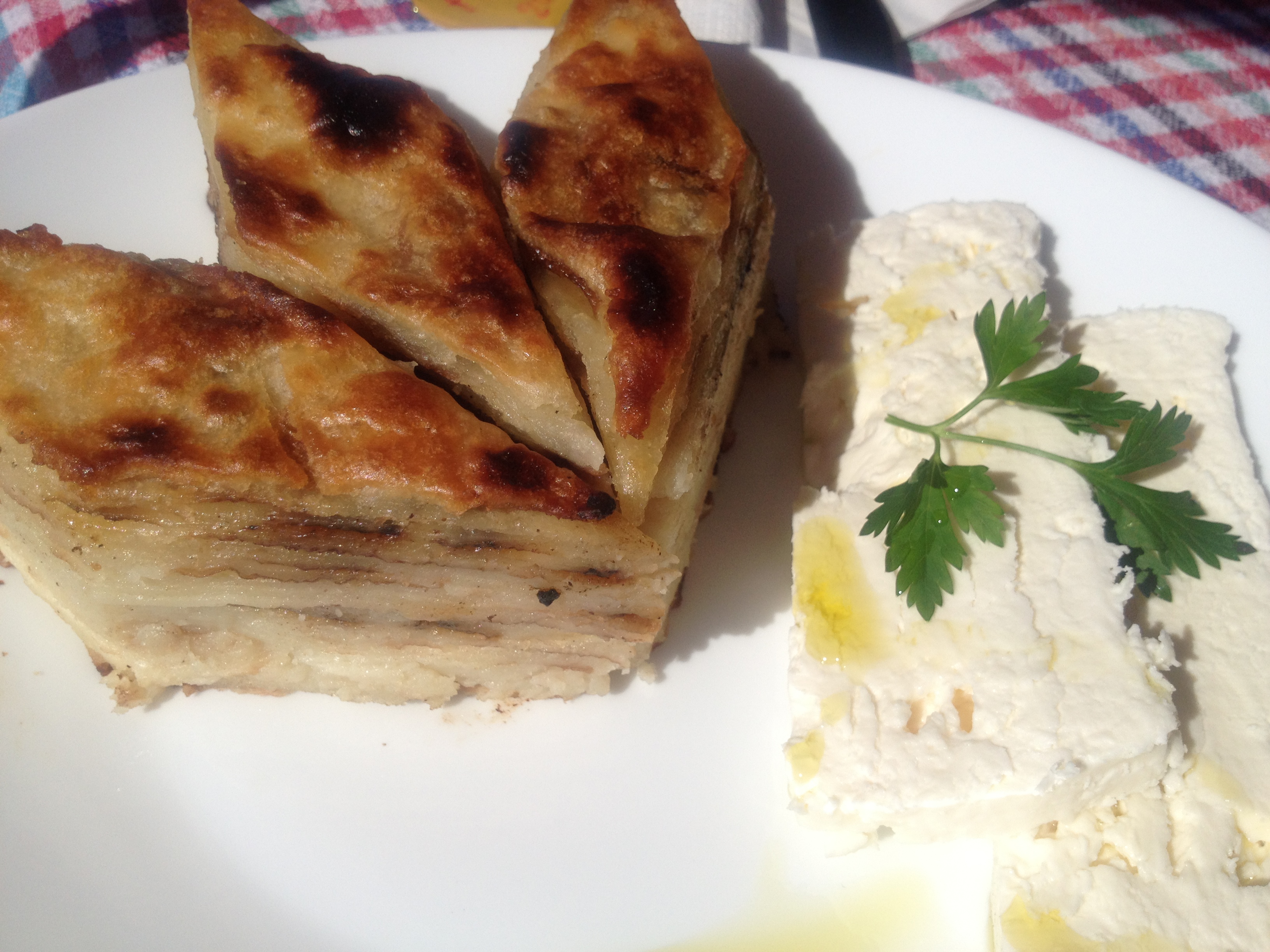 This was perhaps my favourite of the breakfast dishes I had – this corn cake flecked with pieces of white cheese tasted quite a lot like a cheese scone – it was light but filling at the same time and perfect washed down with the sour milk! 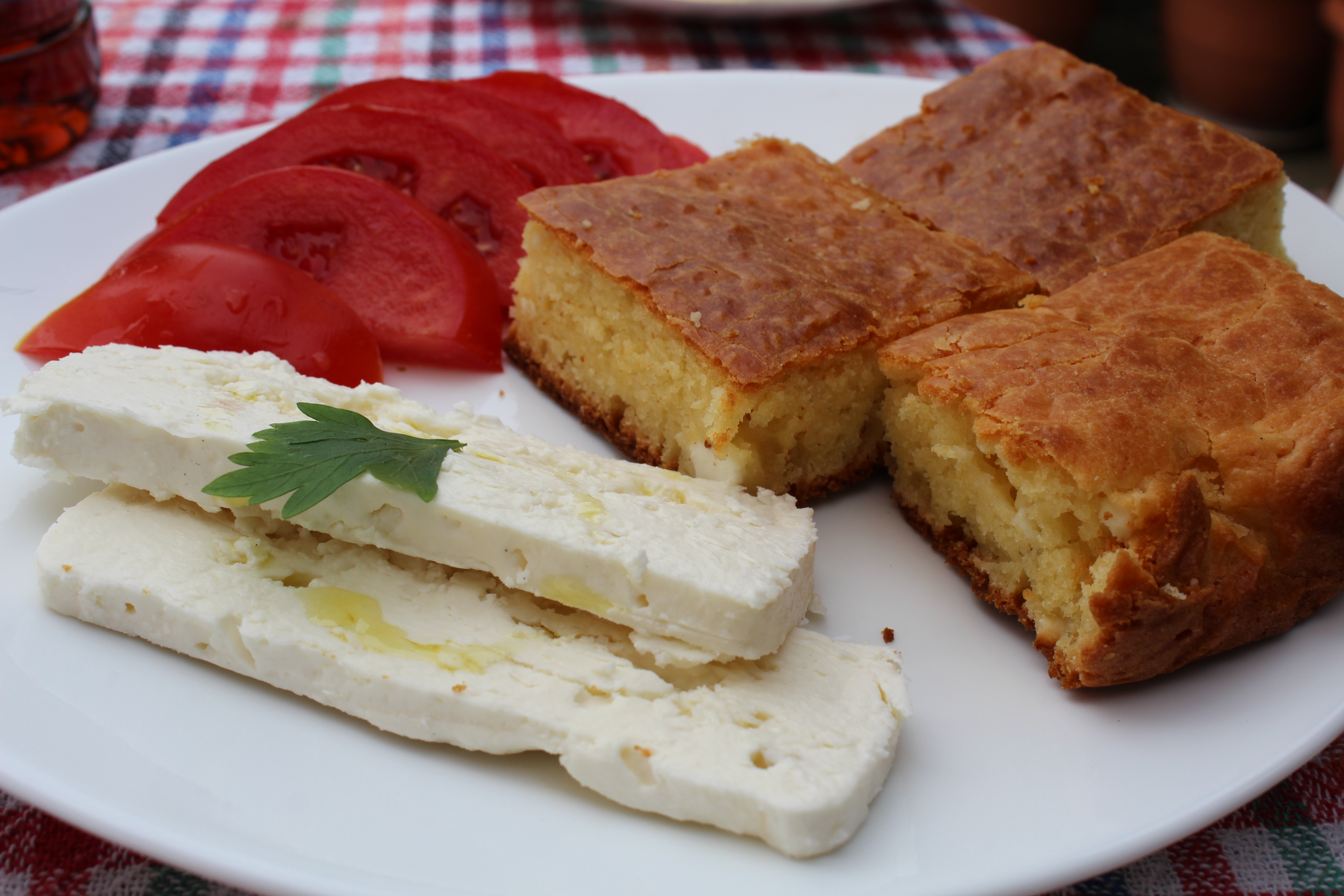 Once you’ve finished breakfast, its time to move onto lunch (and dinner) and there are so many different types of food to choose from!

This was my favourite of all the things I tried in Macedonia and also happens to be the national dish! The white beans are soaked, boiled and then fried with dried red pepper, black pepper and onions. Finally they’re added to the typical earthenware pots and cooked in the oven till they almost crumble and become deliciously soft, but not dry. I love the traditional pots, and you can buy them in any little tourist store. I really wanted to buy some to try the dish at home, however hang luggage limits prevented me! I’ll still be trying to make it though. 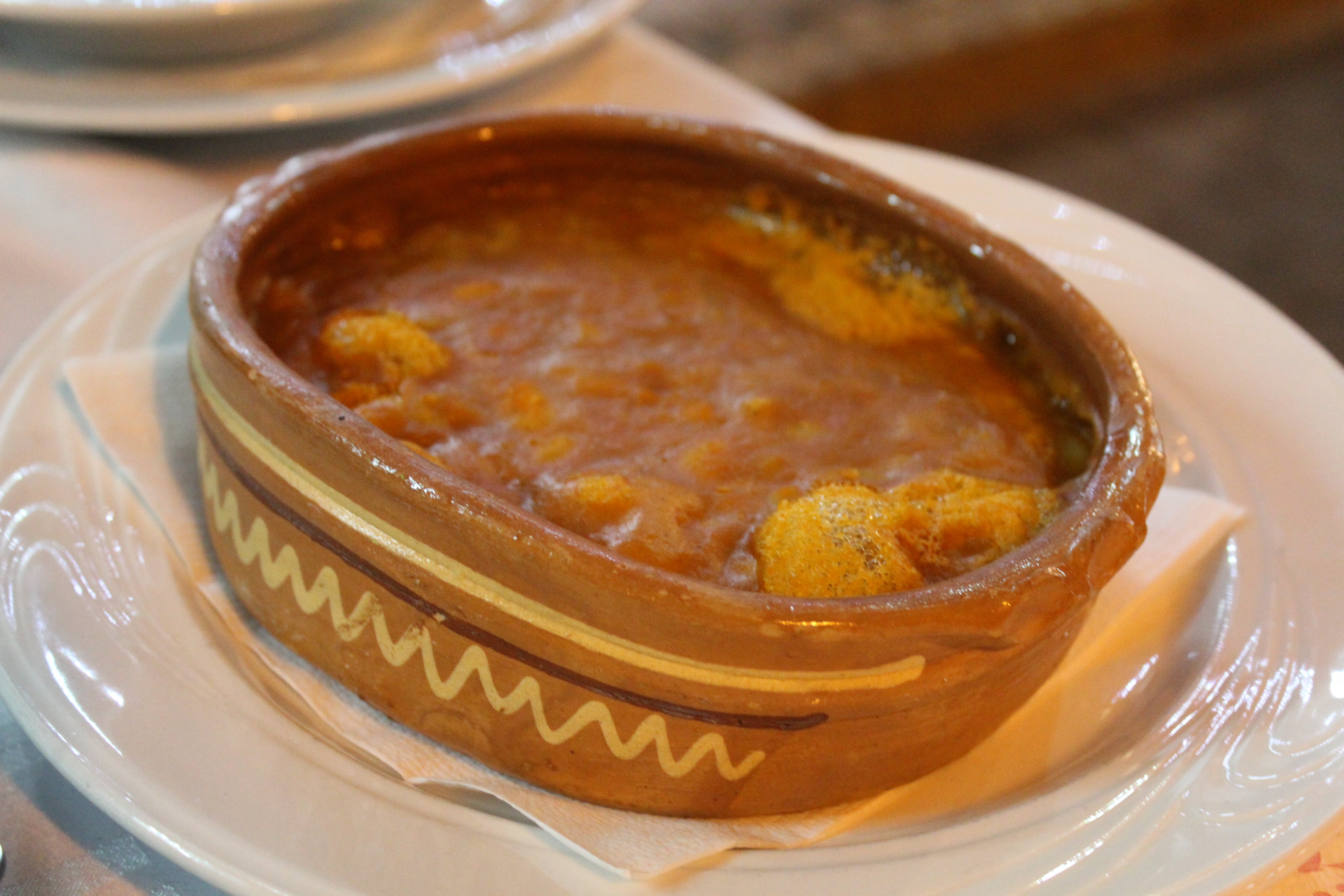 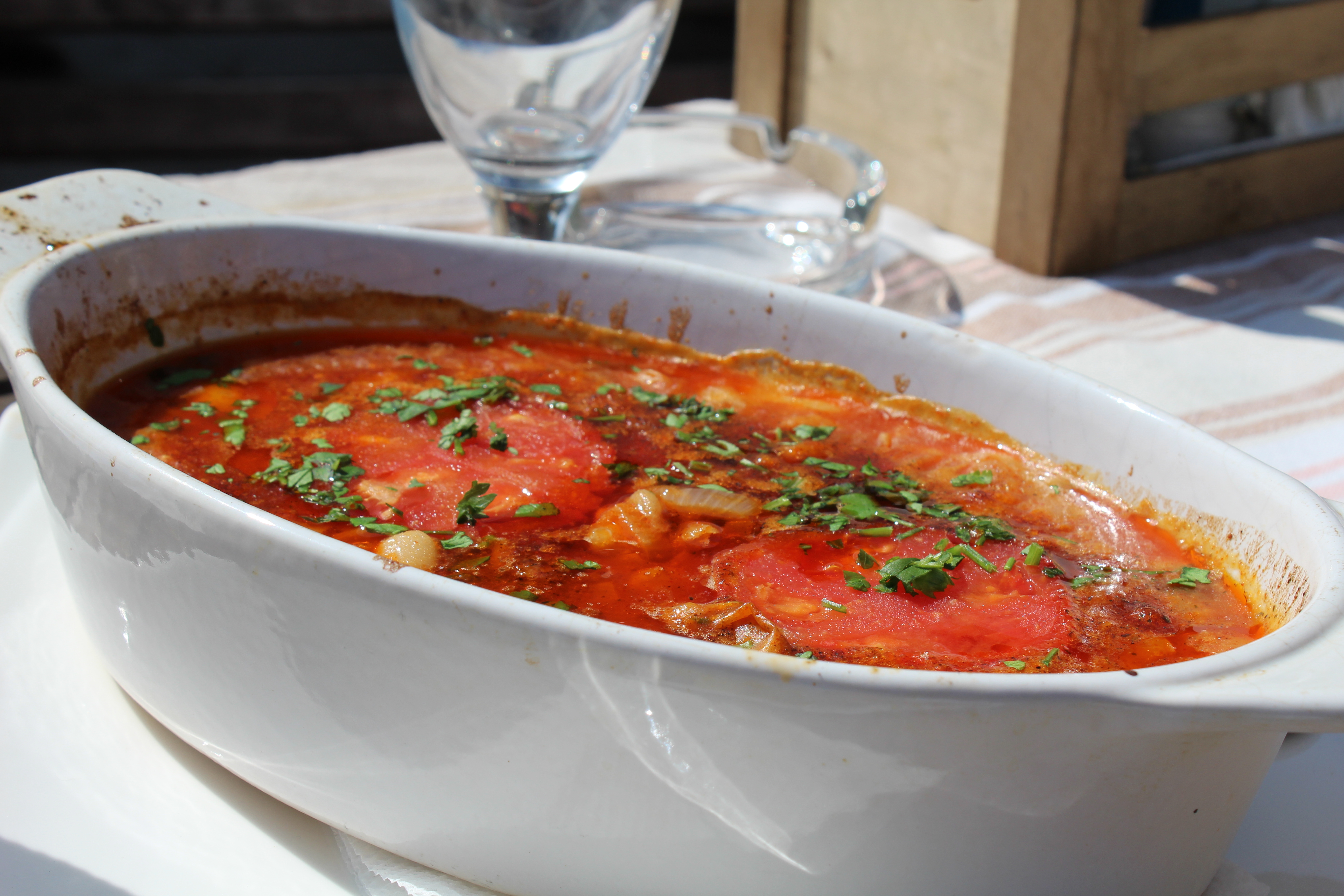 Being on a lake, Ohrid is perfectly placed for eating some of the freshest fish your heart could desire and we definitely made the most of that!

Belvica (or Salmo Ohridanus) is a small local fish found only in Ohrid lake. The best Belvica in my opinion is served at Kaneo Restaurant (just at the base of St Jovan church). It’s cooked in wine and thyme and then served with orange slices and the best spiced potatoes I have ever had! 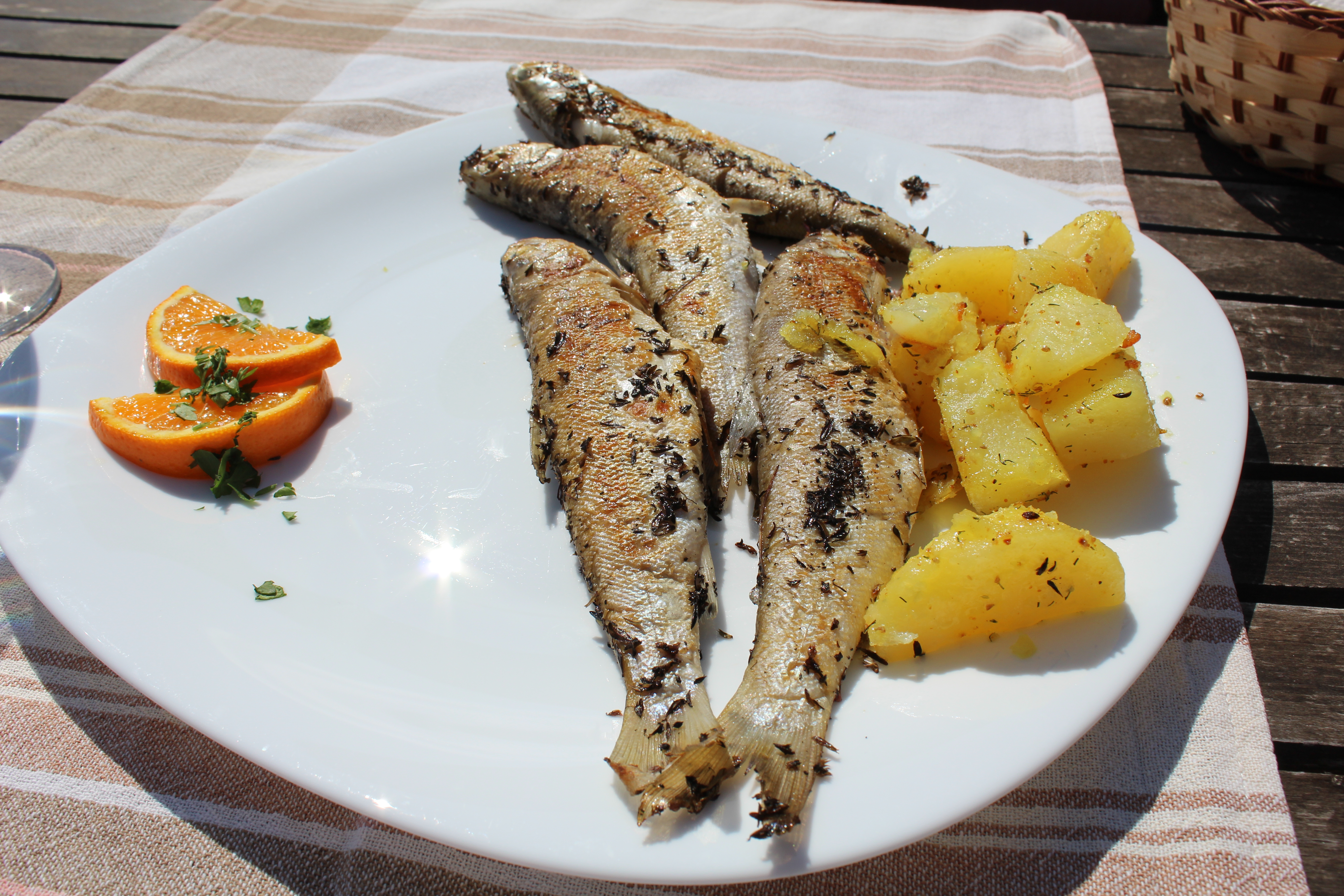 We also tried some Belvica at a little restaurant in Trpezca which was also really delicious and fresh! 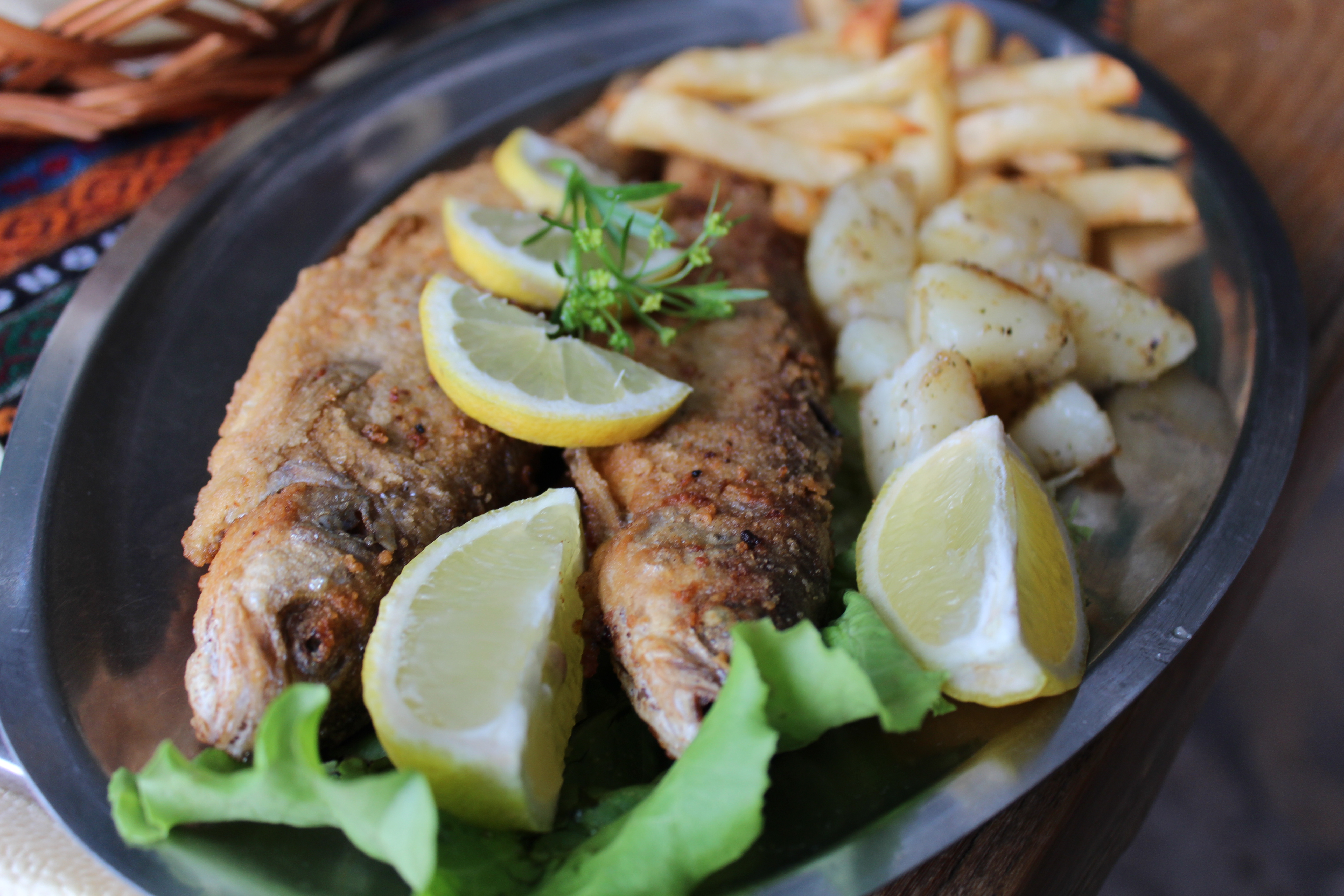 We had some grilled rainbow trout while at Kaneo Restaurant as well and though I didn’t love it as much as the Belvica, that is only because the Belvica was possible the best fish I have ever had in this world! The rainbow trout was soft, with a perfectly crisp skin and delicious flavours – I would strongly recommend it. I wish I had more time to go back and try the rainbow trout cooked in wine too! 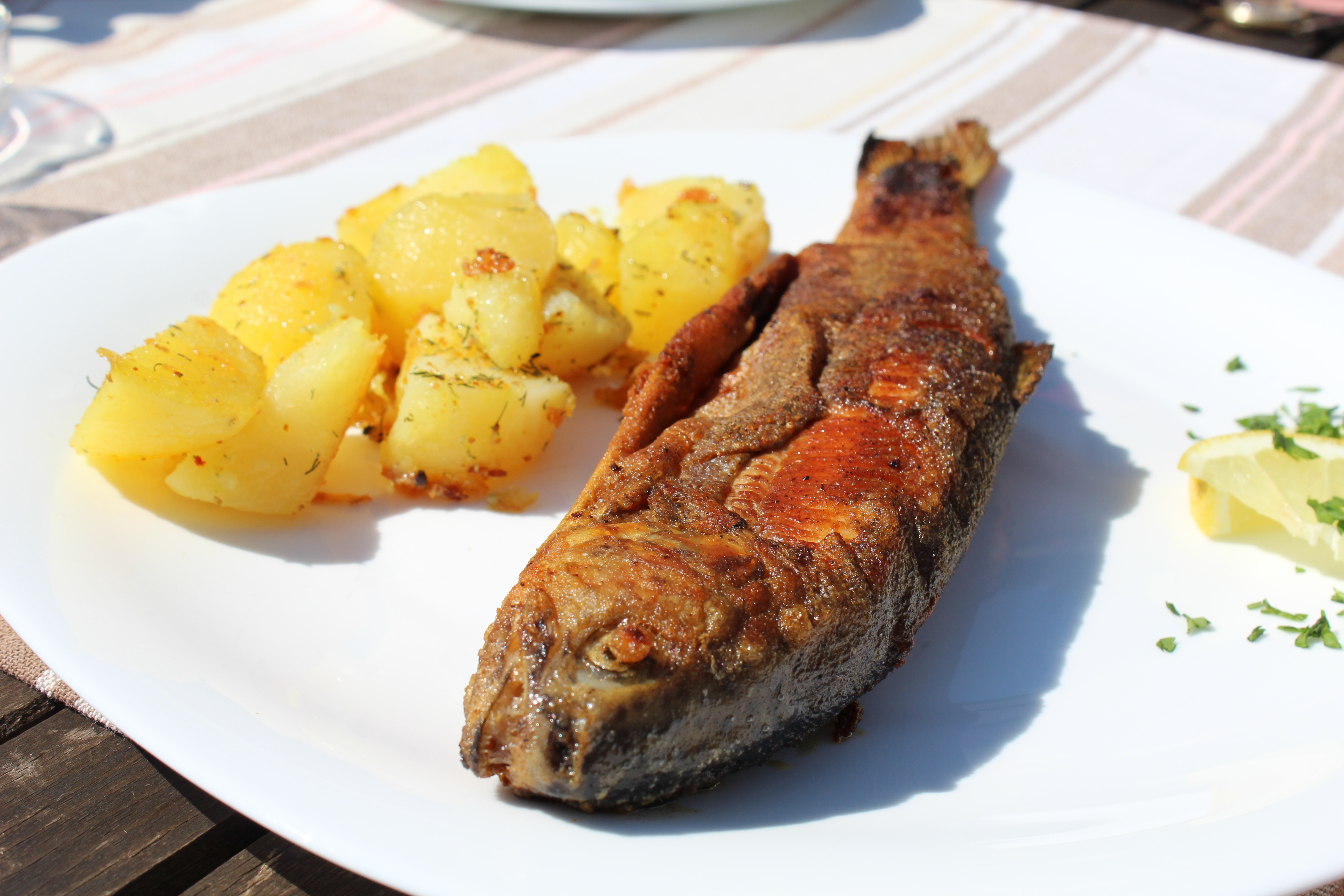 I’m a big fan of sauces, and this garlic sauce was incredible! It was the perfect spread for a piece of home made bread to nibble on while you were waiting on your food to arrive. Unfortunately the waiter at the tiny restaurant where we had this didn’t speak English so I couldn’t probe for a recipe. 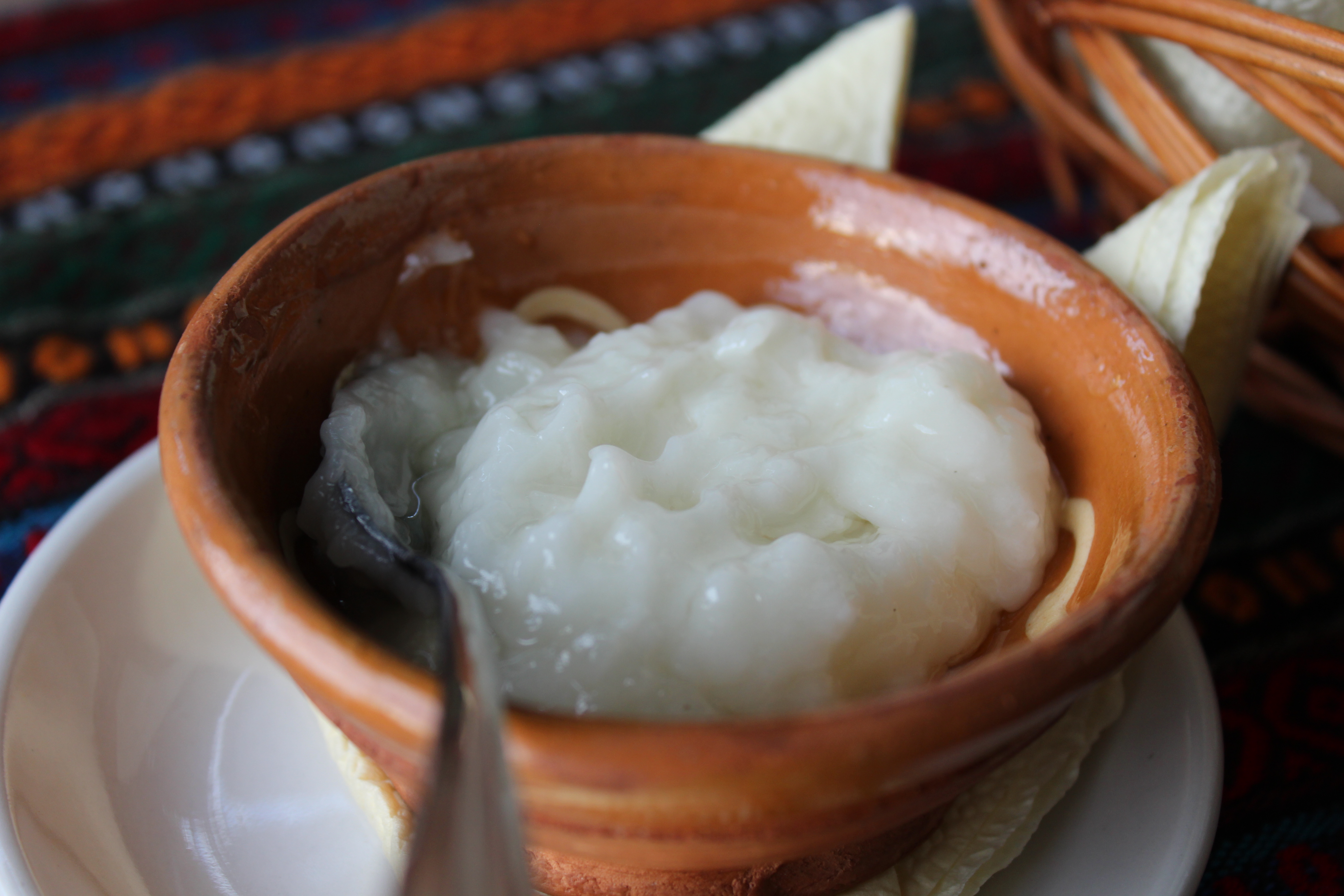 Though famously known as Hungarian, the Macedonians do a goulash that could give it’s Hungarian cousin a run for its money! less spicy but just as rich and deep in flavour, with pieces of meat so soft and tender they just melt in your mouth! Macedonia has so many wonderful dishes and I just scraped the top of the menu! 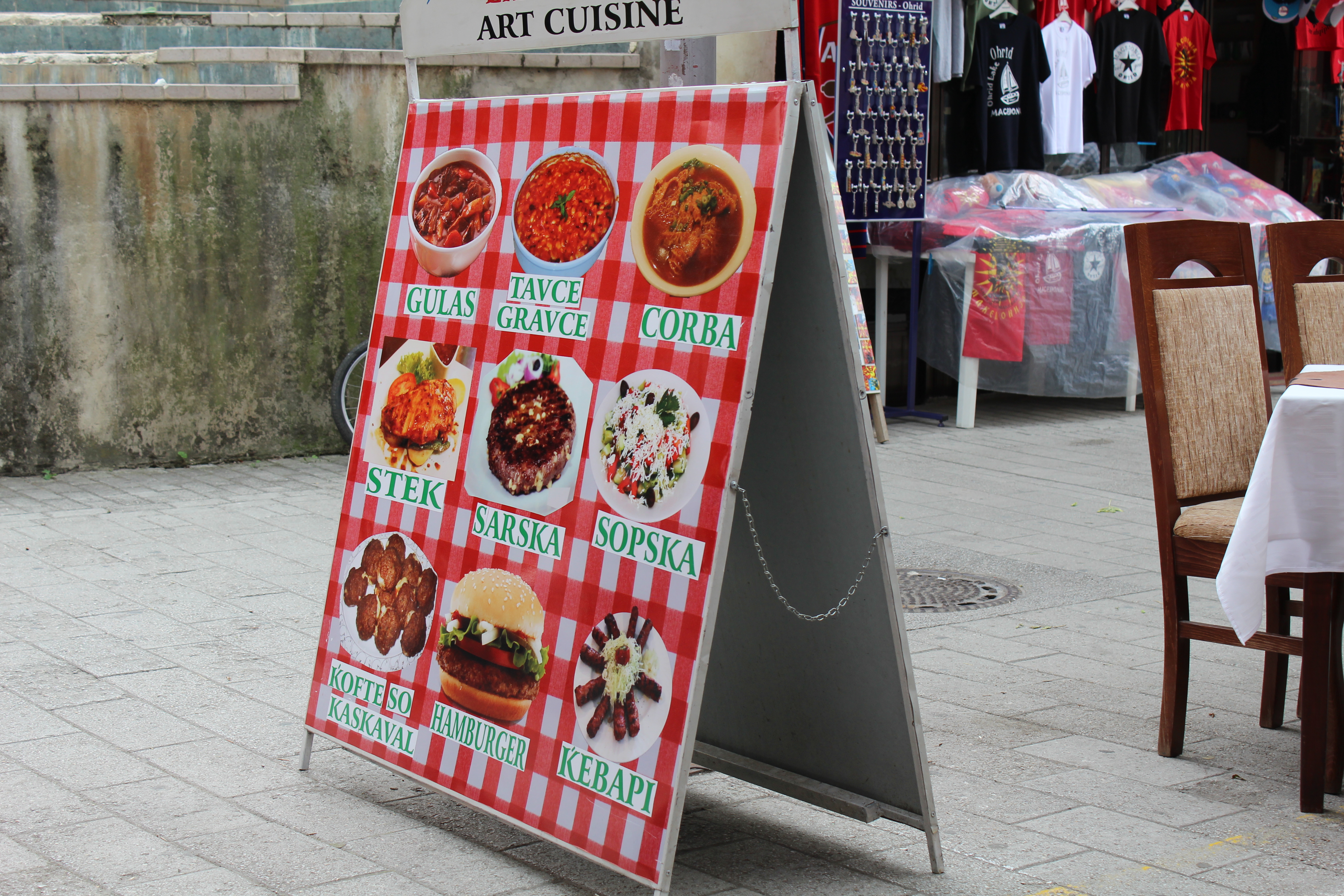 Though fruit isn’t strictly a dish, and certainly not a Macedonian dish, you have to eat as much fruit as you can stomach while visiting Macedonia. The sun, the fresh air and the clean lake water create fruit that you’d think was grown in heaven, not on earth. Kiwis grown at home, peaches so juicy you’re bound to spend the rest of the day licking the juice from your fingers and chin, and cherries so sweet you’ll eat a kilo in a minute! Just wandering around the town you’ll stumble upon a hundred cherry trees, their branches so laden with fruit that they’re bowed over! Old women sit outside their houses selling mounds of cherries, but you can also find pile upon pile of this red and yellow fruit at the market – who knew cherries could be yellow! 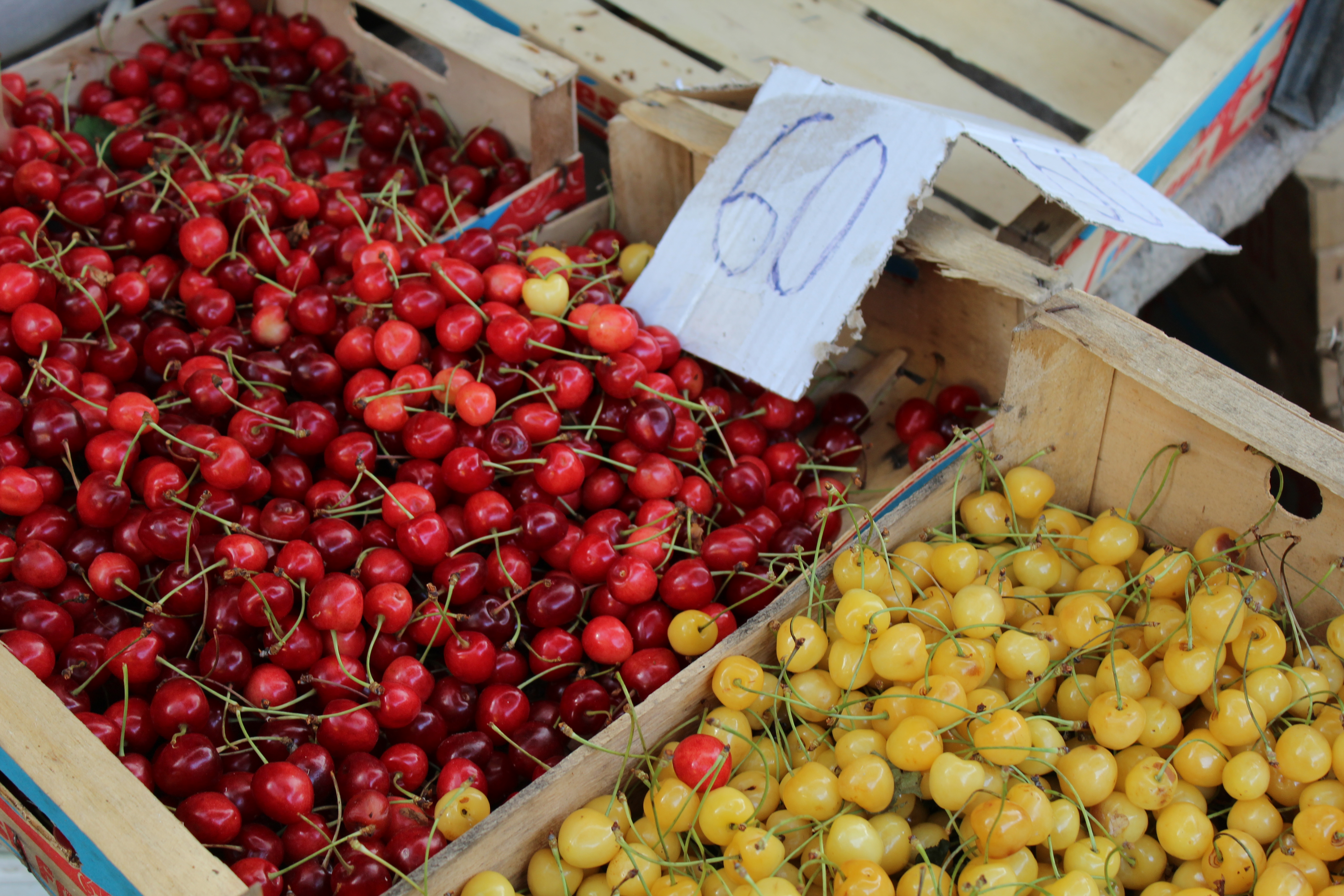 We stumbled upon a man and two children picking fruit from a tree outside St Sophia church. He noticed us looking and called us over to pick us some fruit to try! He didn’t know the English name but the berries were sweet, with none of the tartness of blackberries. The local people are so friendly in Macedonia, it’s such a pleasure to get to chat and know the people who’s city you’re trampling through! 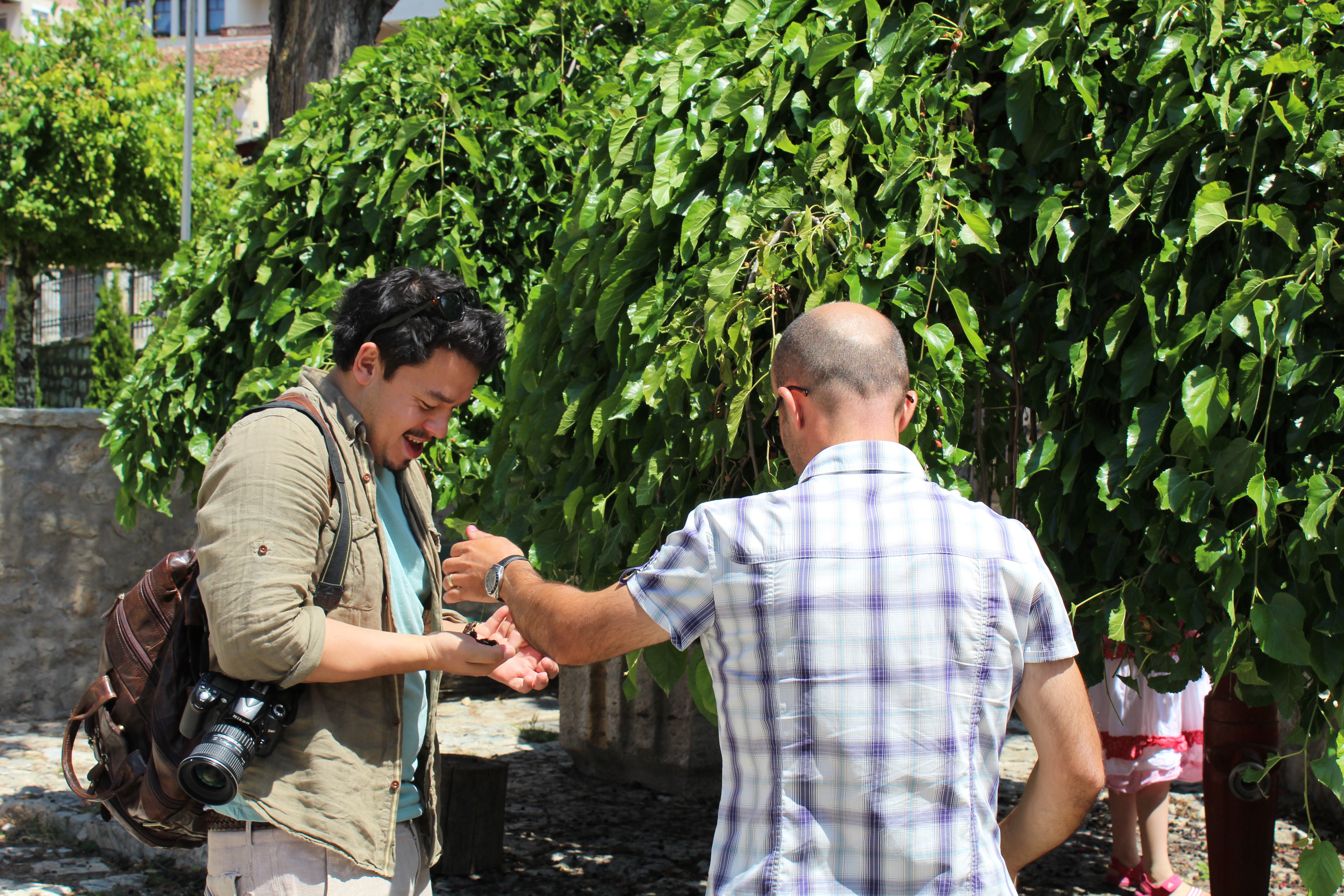 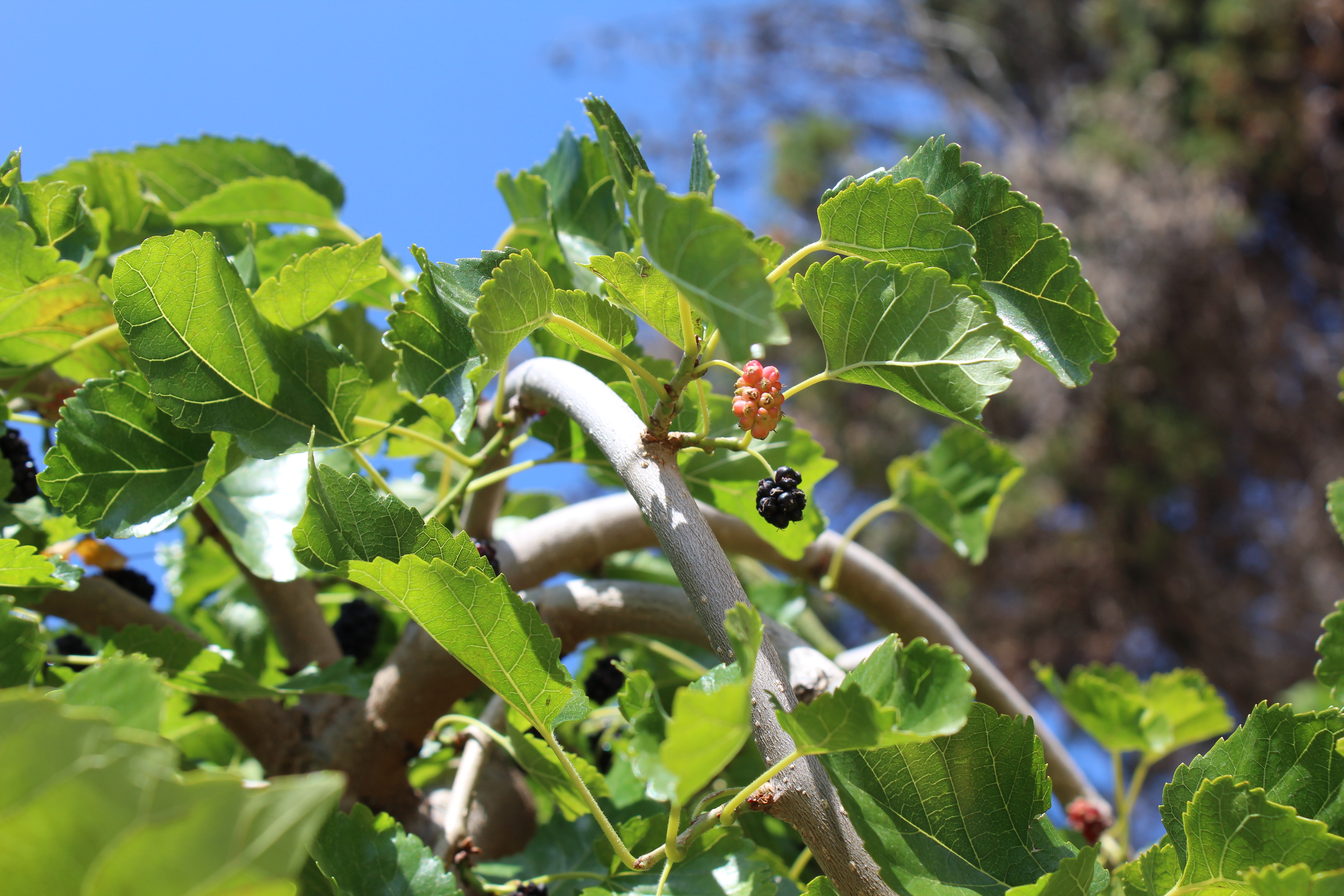 A lot of the people we met in Ohrid make their own rakia and wine, and we were lucky enough to spend a few hours at the home of a local man who was once a chief of police, sampling his home made wares! Fakia is a fruit based brandy that is made all over the Balkans, while it is usually made of plums, apricots and grapes, it can also be based on peaches, apples, pears, cherries, figs, blackberries, and quince. Often rakia is flavoured with herbs, honey or nuts, and the rakia we had was a grape variant, flavoured with rosemary to create a pale green clear liquid. Home made rakias can reach up to 65% which is STRONG! Rakia is traditionally drunk at weddings during toasts but also at funerals. As the guests leave the cemetery they are offered a glass of rakia, and must spill some on the ground first saying ‘for the peaceful rest of the soul’ before drinking the rest!

Equally tasty is the Macedonian home made wine. As my boyfriend mentioned, it’s like wine but without all the chemicals and toxins. It’s fresh and juicy and it makes you feel alive! 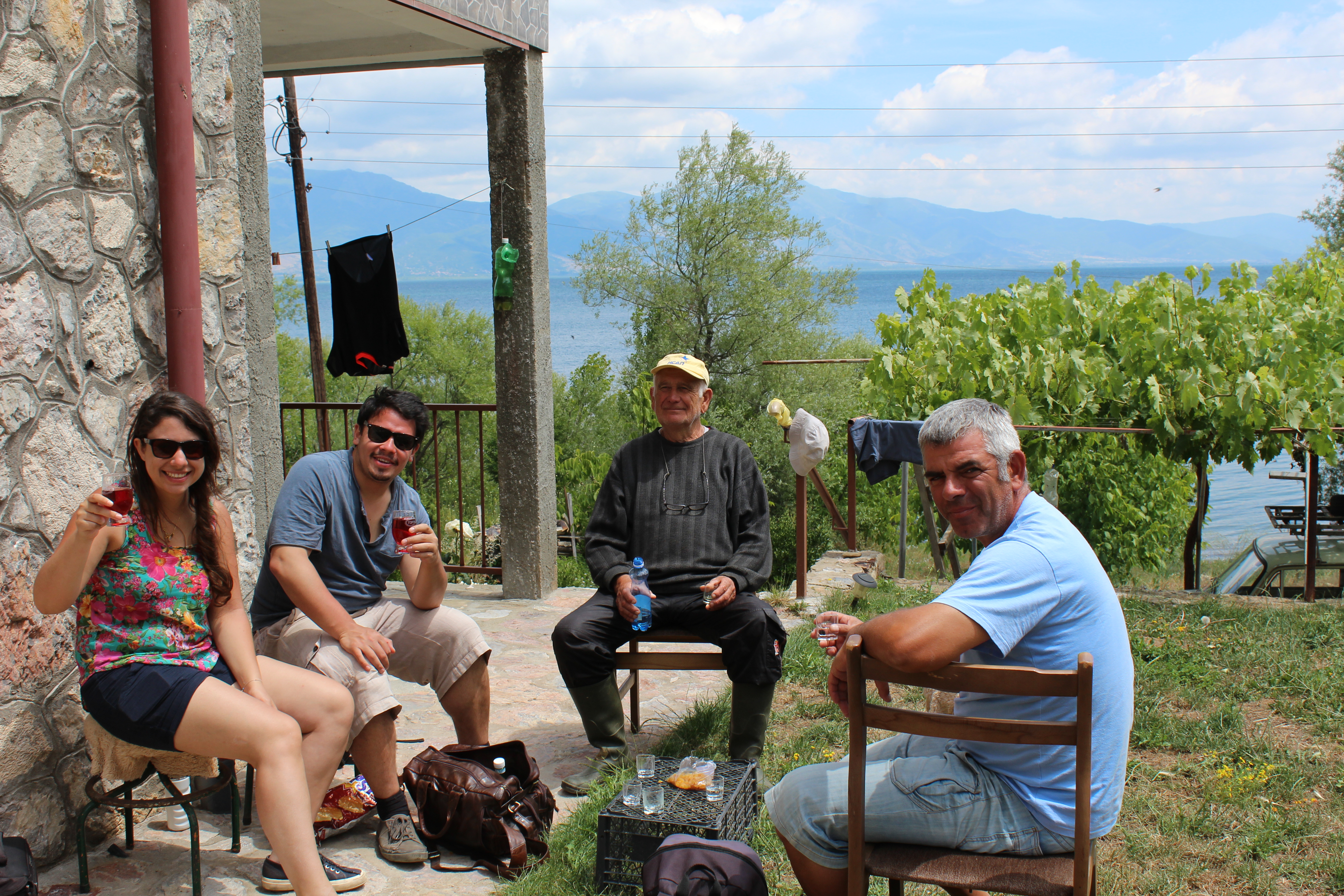