I spent the past weekend cycling in the Cotswolds, a slightly harebrained scheme, considering how hilly the English countryside is. The pain of peddling up all those hills was completely made up for though by the destination: The Cotswolds Distillery. This idyllically situated distillery is one of the few in the UK, where Mary and Janice, the two copper whiskey stills are busy working hard at making a Cotswolds Single Malt, which shall be released in late 2017. In the meantime though, the head distiller has come up with a number of delicious drinks that will be sure to titillate your senses: everything from a London Dry Gin, Limoncello, Expresso Martini through to a Cream Liqueur which you won’t be able to walk away from! 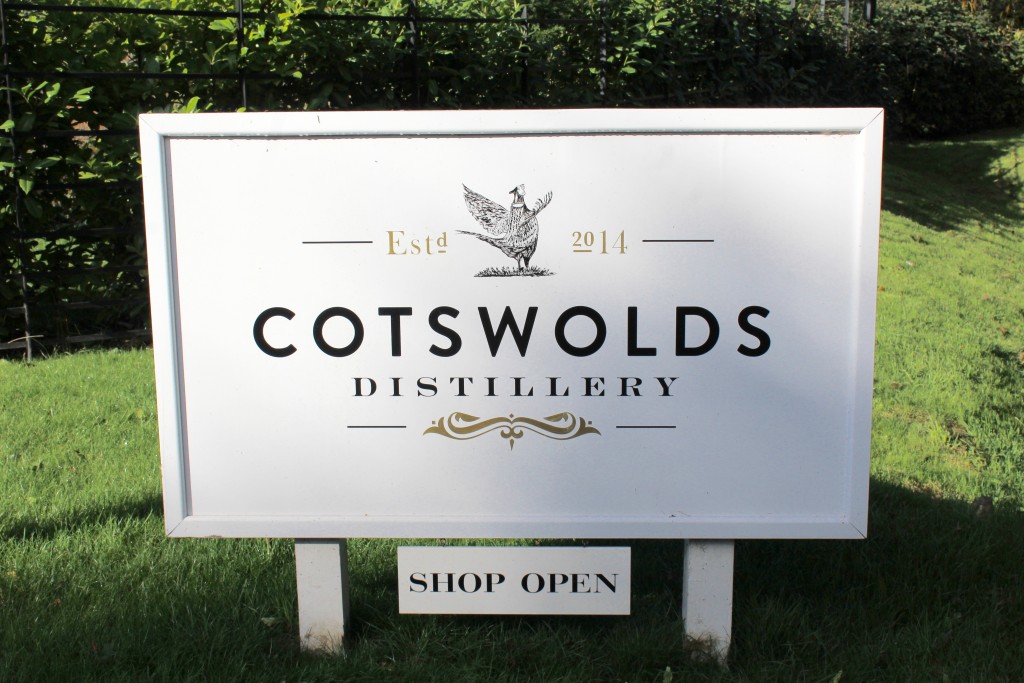 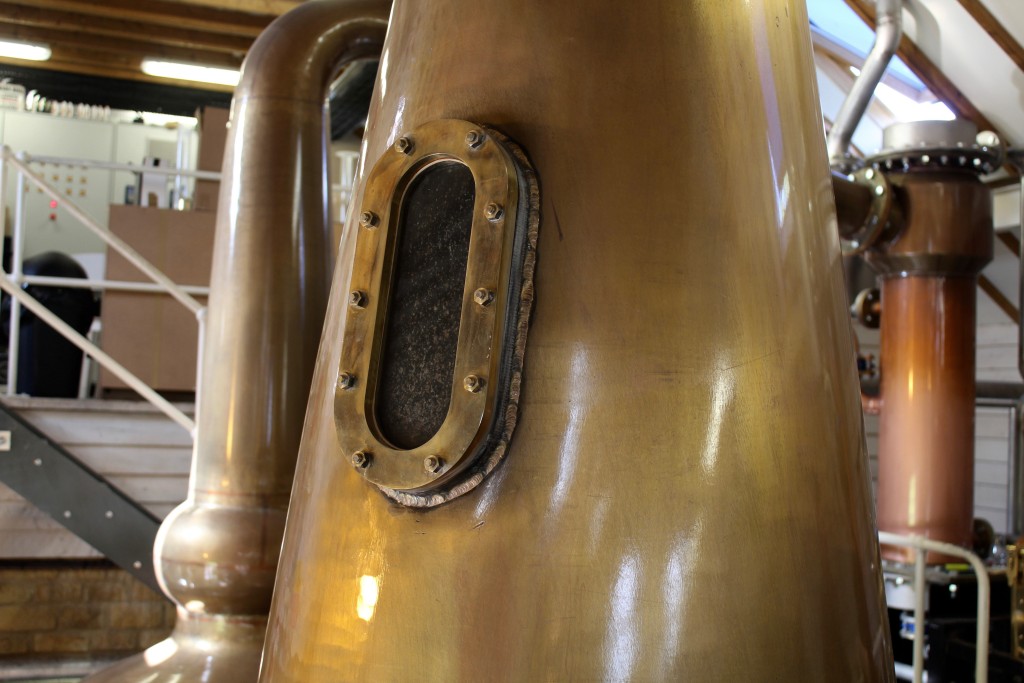 Located between the small villages of Stourton and Whichford, in the Northern part of Cotswolds, the distillery couldn’t have more beautiful surroundings if it tried. The beautiful honey coloured stone houses with thatched roofs and the field upon field of sleepy black and white cows watch on as the distillery furiously works away, emitting delicious intermittent aromas of yeasty barley, citrus and apple cider, depending on the distilling menu that day. 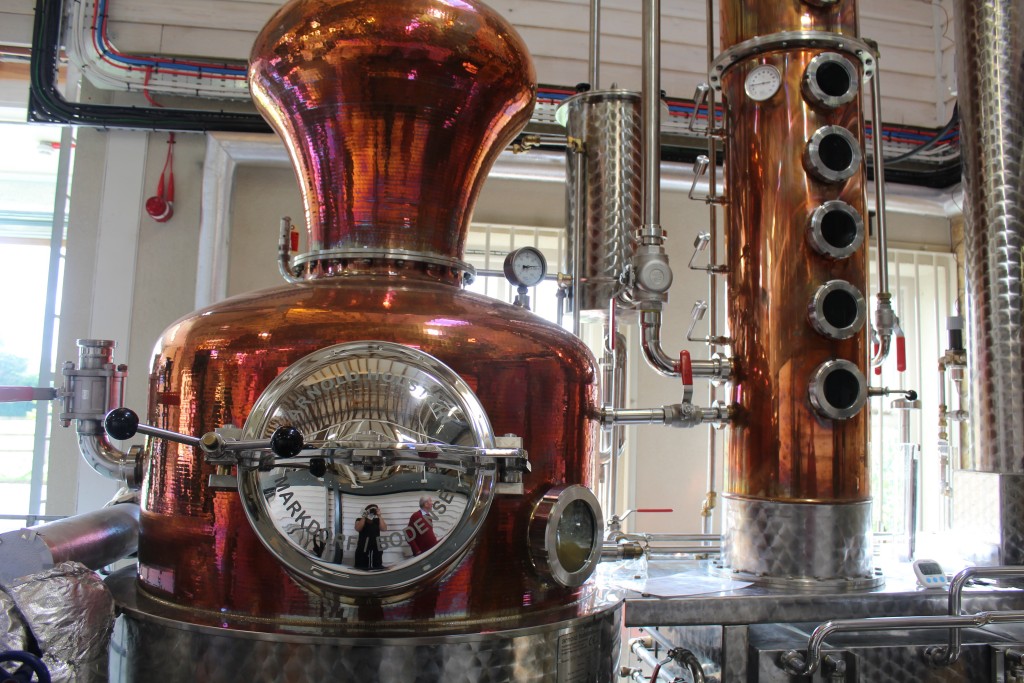 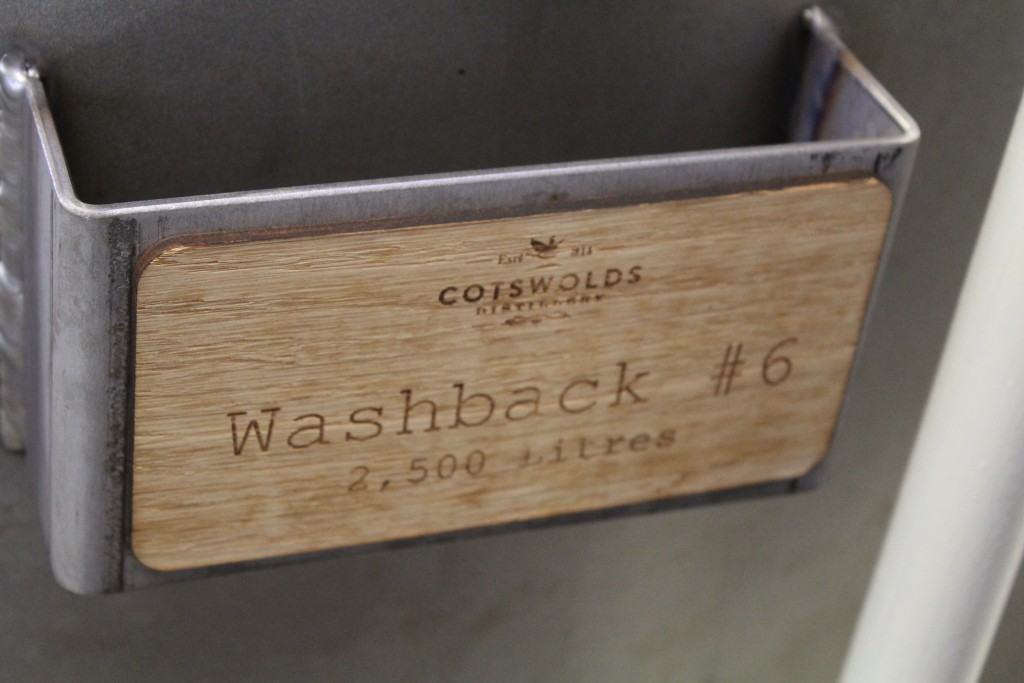 Following an amazing tour of the main distillery by Zoe (who was a gold mine of information) we headed to the ‘Whisky Library’, where the ageing magic was happening right in front of our eyes in old bourbon and red wine barrels and some giant sherry barrels. They call it a library because it’s where all the experiments are kept and can be easily ‘checked out’ to remember techniques and styles used for a particular spirit. It’s not just whisky kept in here, as they also have an unusual spirit called the ‘1616’. This is created by redistilling the malt whisky spirit in the pot still with juniper, coriander, cassia, nutmeg, orange peel and other botanicals and then ageing it in specially toasted and recharred wine casks. Another interesting inhabitant of the library was the ‘Spirited Sherry’ – a mix of Spanish sherry and the Cotswolds Single Malt Spirit

‘The idea came to us as we began to receive our first Sherry-seasoned barrels in which our whisky will be matured. Each barrel arrived with a few litres of wonderfully dark and rich sherry – Olorosso and Pedro Ximenez – to keep the barrels moist. Sherry being a fortified wine, we thought “why not fortify it a bit further with our own whisky spirit”? As founder Dan said, “if sherried whisky tastes great, then so should whiskied sherry!”

The single malt whisky needs to be aged for 3 years in order to be called a whisky so technically the first whiskies won’t be released until late 2017. However you’re able to try the 2 year old single malt spirit at he tasting session along with your tour. It’s possible to invest in the distillery and buy a cask – either becasue you love their whisky that much or because you’re looking for a good investment as they’re willing to buy back the cask at the original purchase price plus a 6% per annum return. For more information check out this brochure. 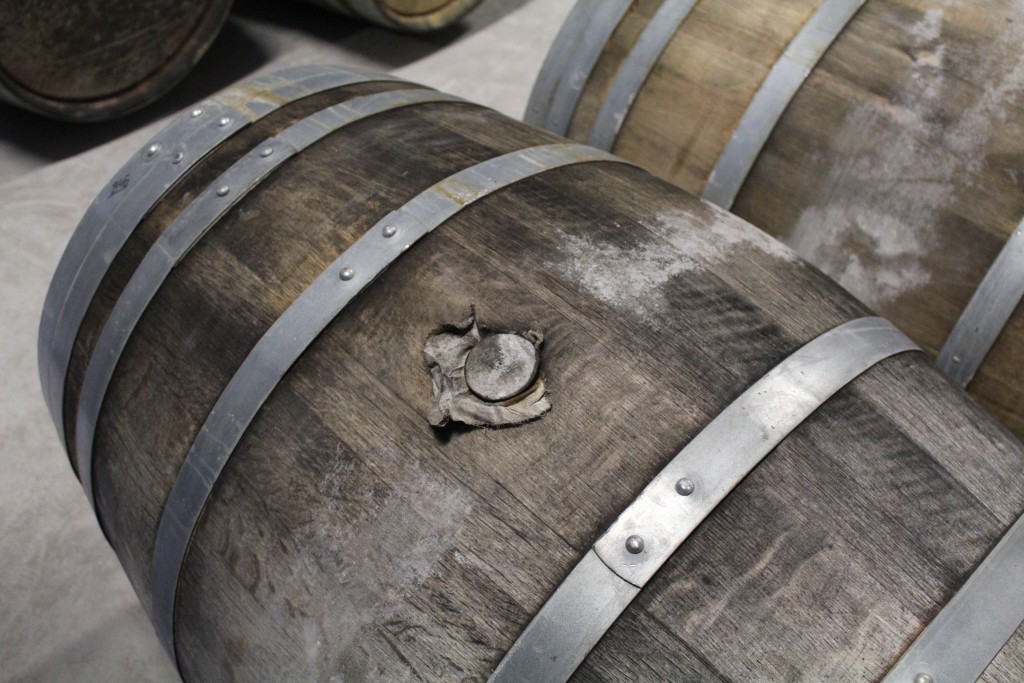 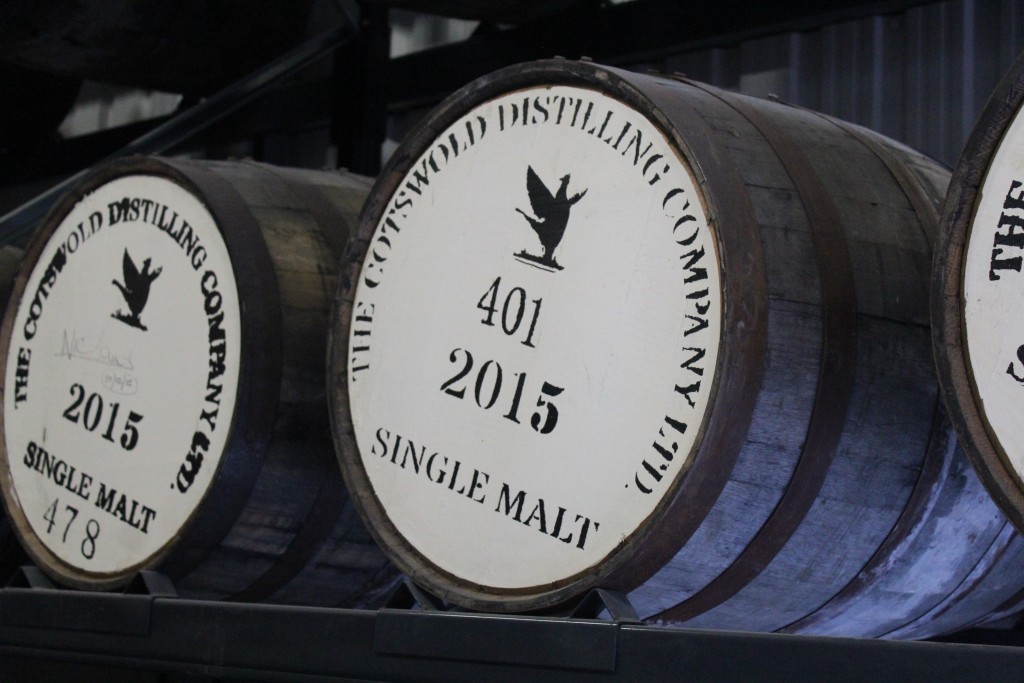 This brought us to the final part of the tour, the most anticipated tasting. And we started with the gin.

Now I’ll be honest, I don’t like gin, not at all. But even I could tell that this gin was a cut above the rest. Just the scent of it alone was enough to transport you to a sunny lavender field, I couldn’t stop inhaling. In fact the lavender comes from a nearby farm as the gin is flavoured with local Cotswolds botanicals. Instead of buying citrus peel, they buy the fruit by the vat and then hand peel each grapefruit, and each lime – purely to give their gin that extra flavour. Well, it might be a tough grind for the lovely people who work there, but it’s all worth it! I’ve never had a gin quite as fragrant as this London Dry Gin. We tasted it neat at first, and then tried it again, first with ice and then with tonic water. 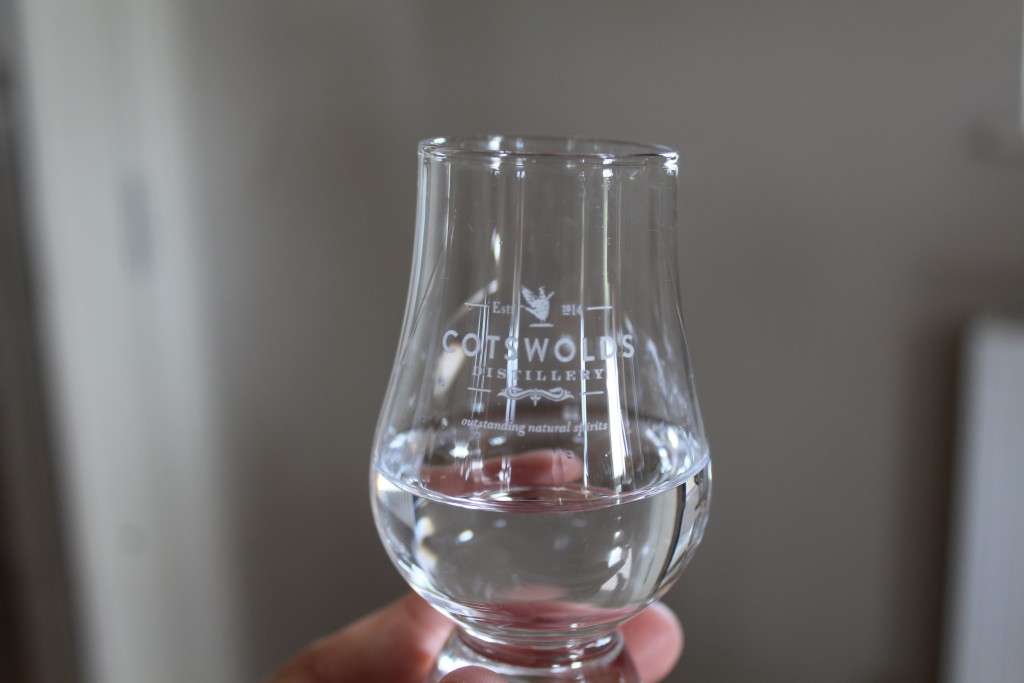 When you add the ice cube, the gin transforms into a mesmerising pearly opalescent liquid, resembling moonstone. The citrus oils really come into their own when mixed with the ice and the hint of grapefruit takes the lead, the lavender falling behind into a close second. Finally, when you add the Tonic Water (they swear by Fever Tree), the gin reveals yet another layer of its taste – this time the spices. The subtle hint of black pepper and coriander seed floats to the surface and hits your tongue with a fiery yet subtle punch. 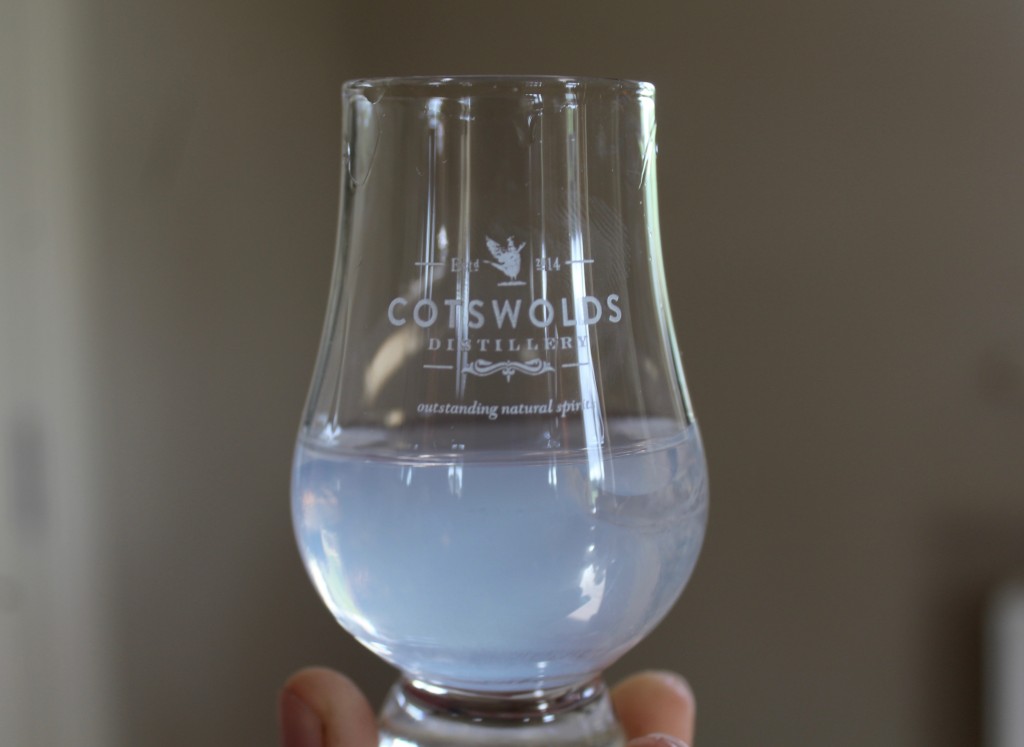 After the gin, we were allowed to taste anything we wanted from the Cotswolds selection and I honed straight in for the Cream Liqueur which was so good, I asked for seconds and then thirds and then bought a whole bottle. It was described as ‘kind of like Baileys, but better.’ I wouldn’t even put Baileys in the same sentence as this drink as it’s on a different level altogether. The creaminess of the Irish Tipperary cream softens your mouth for the strong whisky flame. It’s a marriage of heaven and hell and it works so blissfully you’ll just want to keep on drinking forever. Beware! 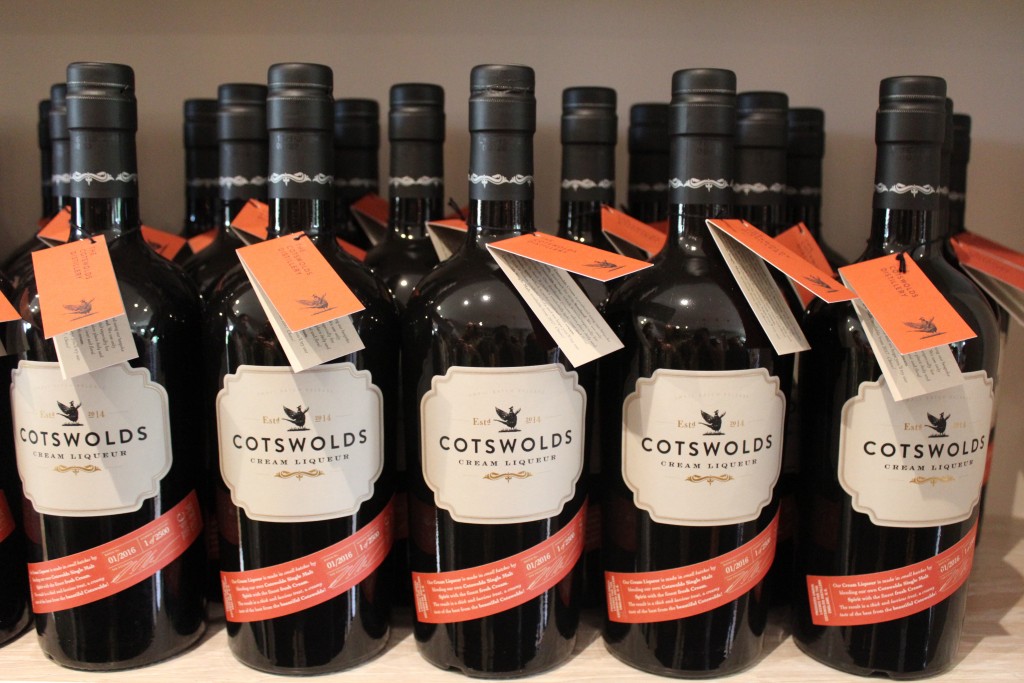 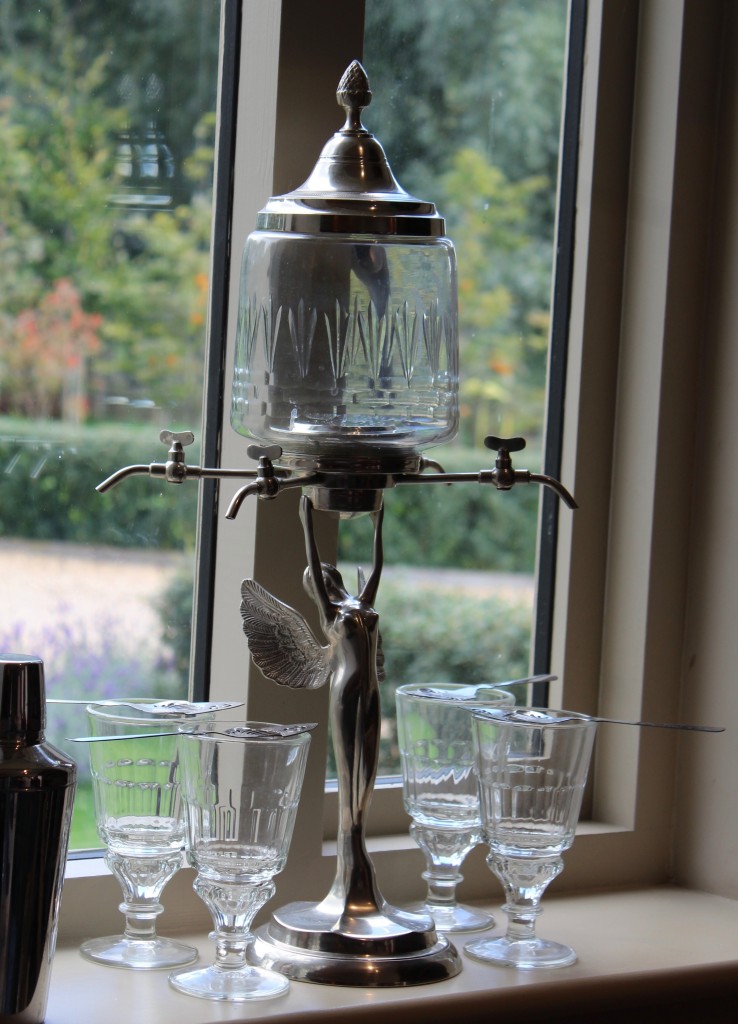 I loved the beautiful absinthe fountain in the tasting room, which wasn’t at all out of place as the head distiller has played around with absinthe flavoured liqueurs, keeping the flavour and removing a little of the knockout effect that not all of us want to produce a sweet aniseed digestif.

If you’re in the Cotswolds or nearby and fancy a trip to a local distillery with a small passionate team with a lot of patience, skill and a lot of love for their products, then this place is definitely worth a visit. The tours are very reasonably priced between £6 – £10, and it’s definitely one of the better tours I’ve been on. Zoe in particular was a ray of sunshine who was clearly so passionate and knowledgeable about the work they’re doing, it was a real pleasure just to listen to her.