New Orleans is synonymous with jazz: it’s a city that has musical notes as its pulse, pounding and pulsating through your body wherever you go. No matter where you are in The Big Easy you’ll hear the music. Whether it’s right in front of you and you’re tapping your feet, nodding your head, then suddenly dancing in the street, or just a faint faraway tune carried in the breeze. You can’t help but smile though, knowing that someone, somewhere, on the banks of the Mississippi, is getting lost in the music.

Music is everywhere in New Orleans, so I can’t write an article about where to find it, all I can do is try to be a compass to your wanderings to make sure that you don’t miss the truly special places.

Even though the musicians on the streets are indeed busking, it feels like they’re just there to play, whether that’s to practice for a gig or just for the love of their instruments. The streets of New Orleans are like an extension of people’s homes, you’ll find all kinds going on, from huge crawfish boils to locals just sitting out on their swing chairs on the front porch, watching the world go by.

The trio below were some of my favourite musicians I saw while in New Orleans. I’ll be the first to admit I know nothing about jazz but the passion they had for playing was so evident you couldn’t help but be swept away by their rhythm and notes. In no time at all they had the whole street dancing! 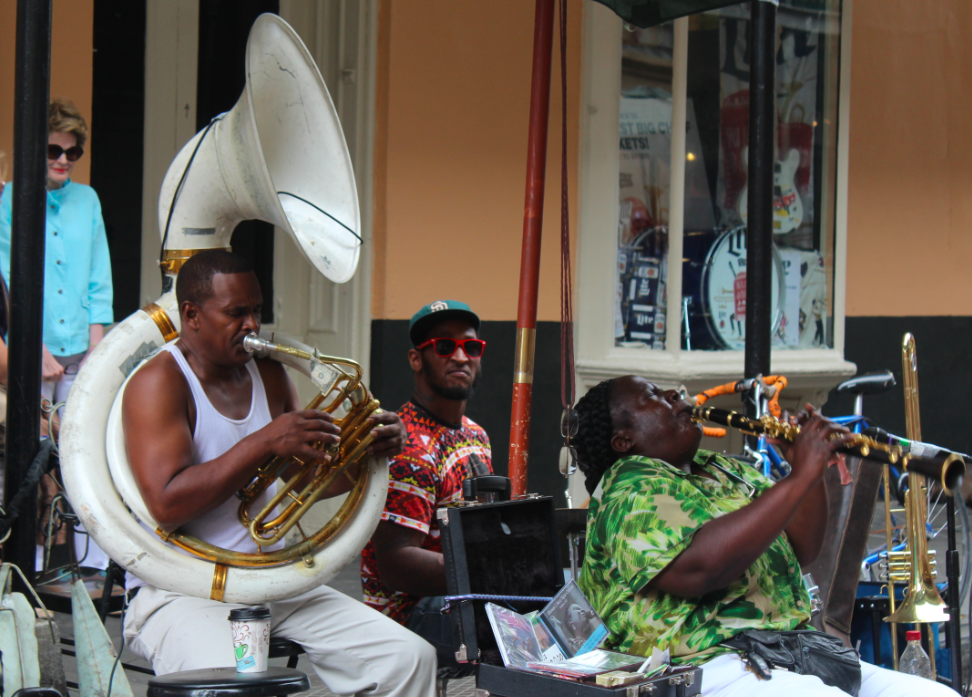 Just incase you walk down a street bereft of live musicians and music, the local street artists have got you covered! So many murals around the town were dedicated to famous musicians, alive and… dead! 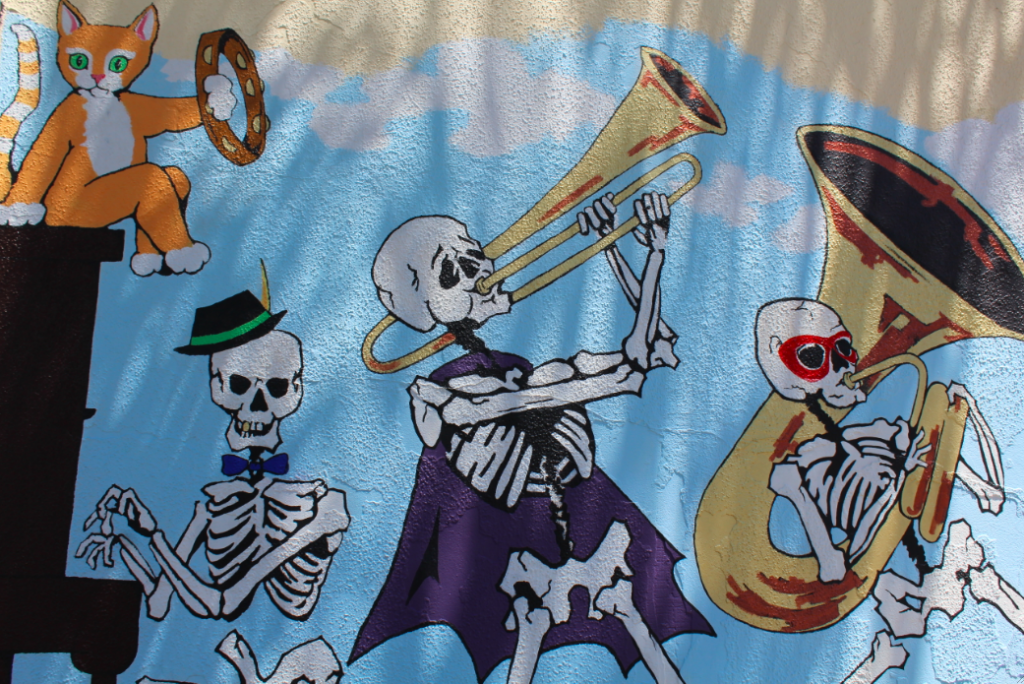 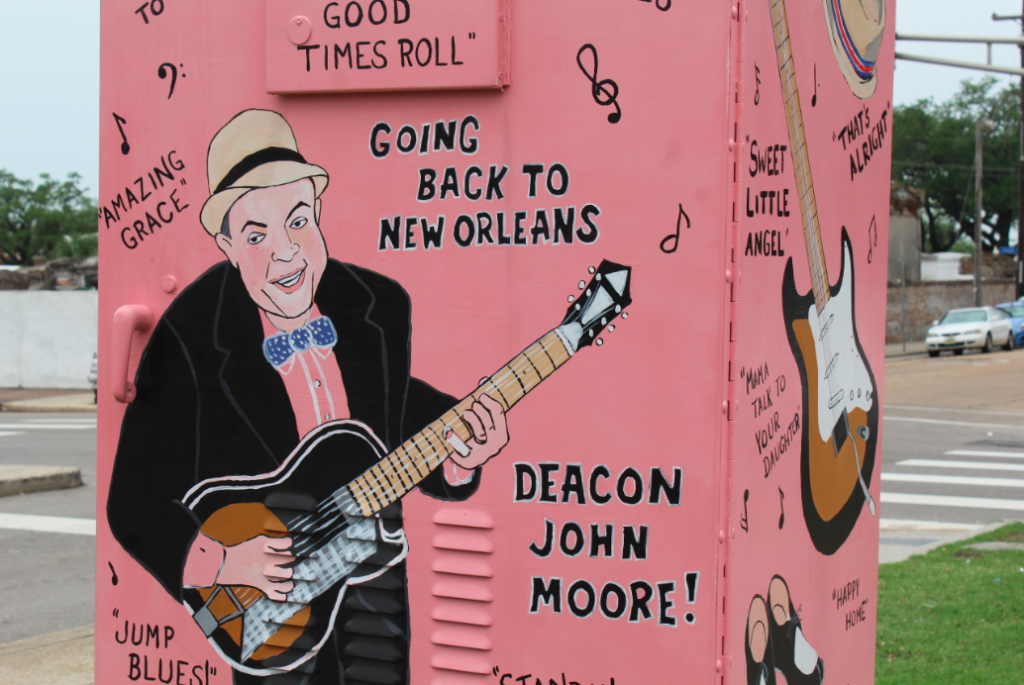 Technically, this still counts as music on the streets, however the famous Jackson Square is one of the best places to listen to some free and very talented jazz music. You can sit on the steps of the St. Louis Cathedral and while away the hours between your breakfast beignet and mid-morning praline candy with some sweet sugar jazz.

Chartres Street, in front of the Cathedral, has historically been shared by painters, caricaturists and more recently, tarot card readers, jugglers and magicians. It’s a bizarre mix of the amateur, the new age and the very talented. We were very lucky to happen to catch this wonderful group of jazz musicians, but we also spent quite some time listening to an African Kora (harp) player! Like I said, you get a bit of everything washing up on the banks of New Orleans! 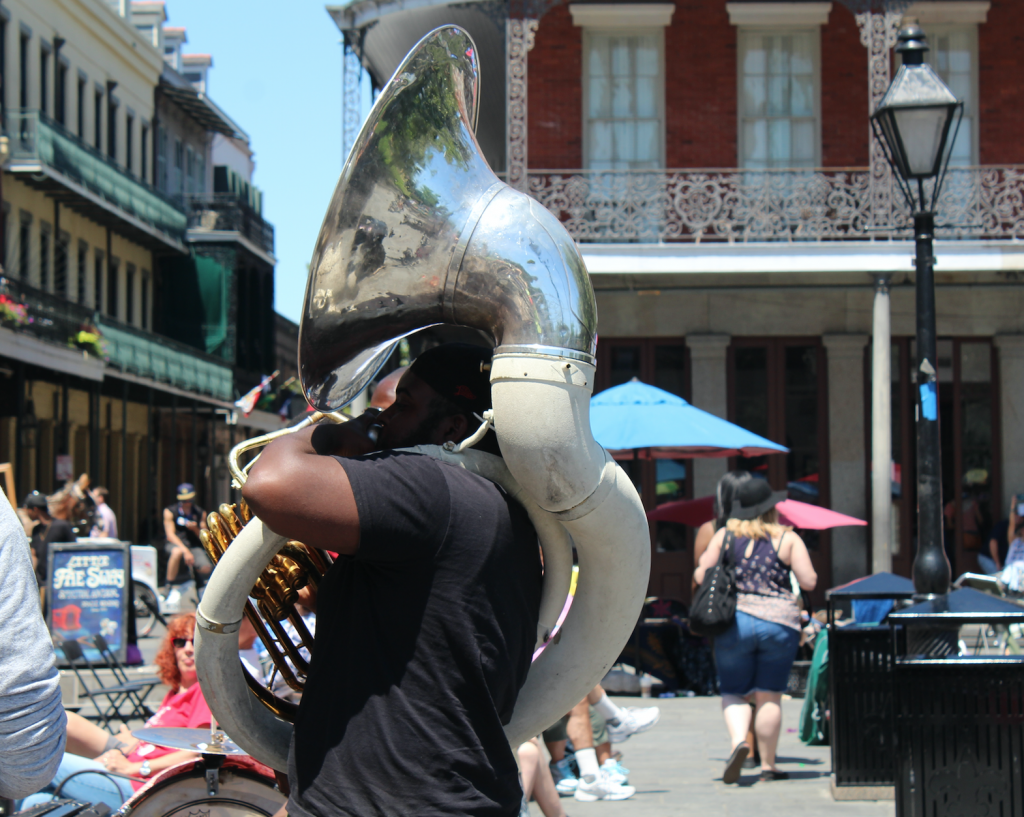 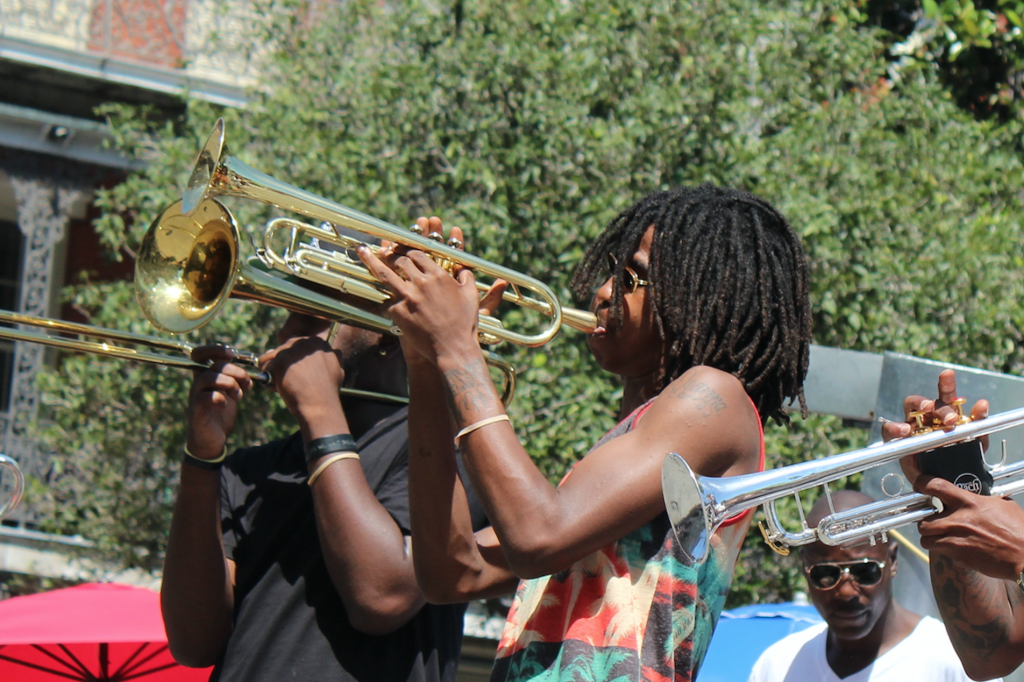 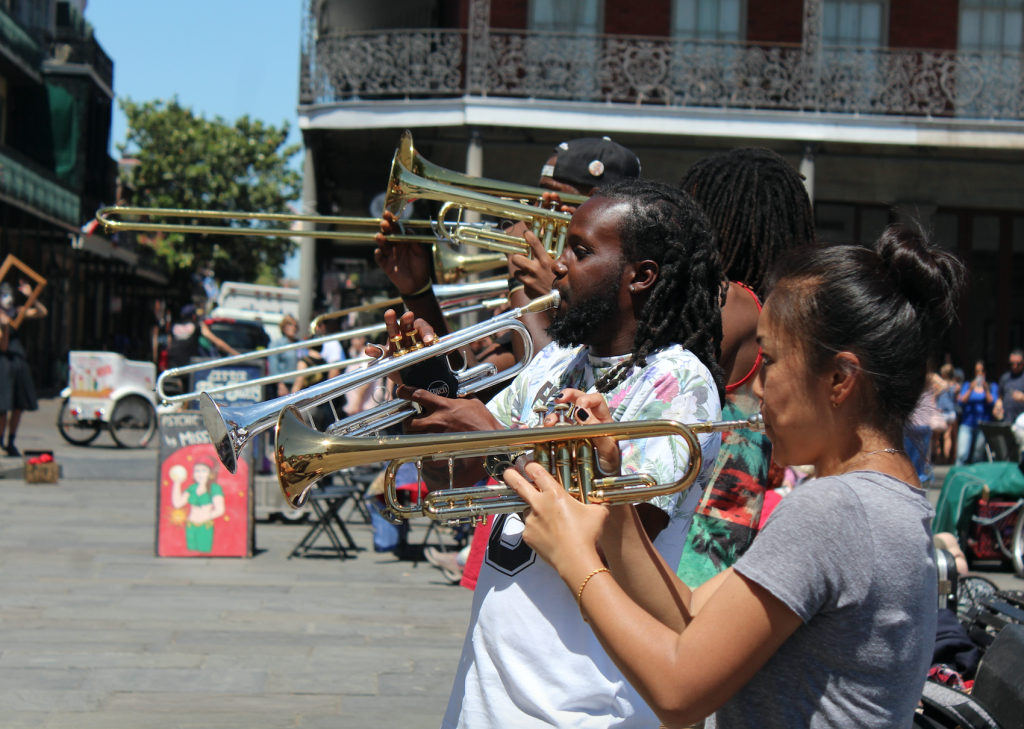 Take a stroll through the famous park in the Tremé quarter to see the giant statue of the Jazz legend himself. Armstrong grew up in New Orleans in poverty, living in a rough neighbourhood called ‘The Battlefield’. He dropped out of school at the age of 11 and busked on the streets for money, later saying:

“Every time I close my eyes blowing that trumpet of mine—I look right in the heart of good old New Orleans… It has given me something to live for.”

The best of New Orleans, and indeed jazz musicians around the world, have played on those very streets you’re walking on, and that’s really something. 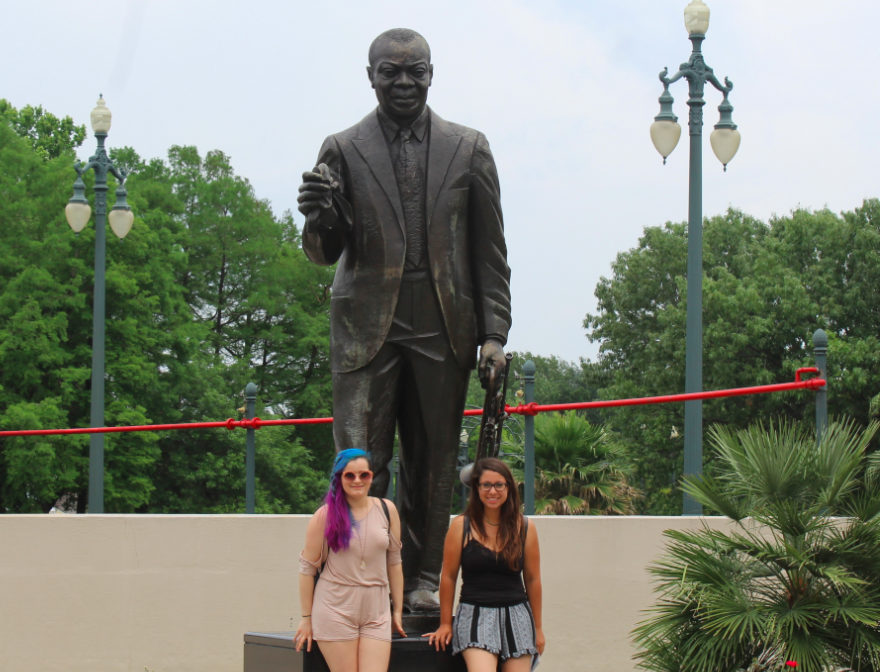 We happened to be in New Orleans during the famous JazzFest, and the Louis Armstrong Park is the venue for free live concerts every night so make sure to swing by! 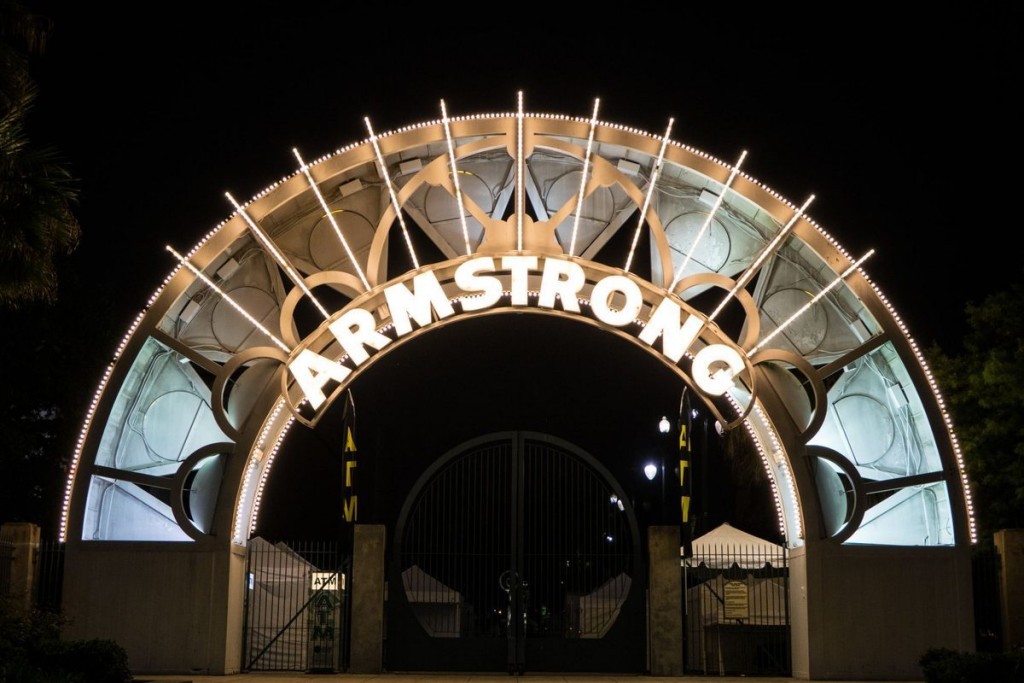 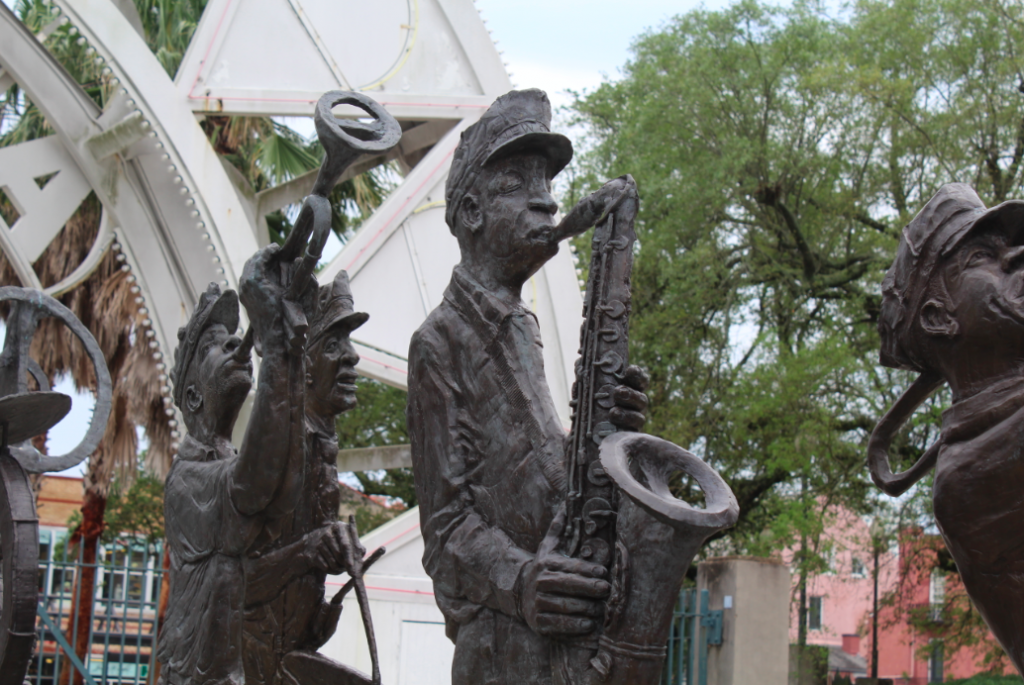 Tremé the TV series never got the credit and viewers it deserved, but the neighbourhood blows any expectations of viewers out of the water. One of the oldest neighbourhoods in New Orleans and historically the home of freed slaves, it is to this day an important centre of African American and Creole culture, especially the tradition of brass bands.

While in New Orleans during Jazz Fest, we had to move out of the touristy French Quarter area as the prices had gone up through the roof. We found ourself staying in the very beautiful but somewhat overlooked Upper Ninth Ward (to be honest everywhere in New Orleans is beautiful!) One day when hunting for an authentic local Crawfish shack, we ended up at Captain Sal’s and started chatting to a fellow diner, Dwayne. He turned out to be a musician and had an upcoming gig which he invited us to.

So off we wandered on the night through the dark and unpopulated streets of Tremé to the Ooh Poo Pah Doo Bar. I thank the stars that we met Dwayne every time I think back to how incredible our experience was that night. The Ooh Poo Pah Doo is what every person wants to experience when they go to New Orleans but don’t quite know it. The ultimate locals bar, it seemed everyone knew each other, it was almost like stepping into someones home. There was even a delicious free dinner of rice, beans and a sausage casserole served at the back of the bar so that the revellers wouldn’t go hungry. Monday nights are a kind of collaborative night, so if you can play an instrument, all you have to do is turn up and join in. The core band of four (including our friend Dwayne) swelled to fifteen at one point during the night, and the small room swayed with people giving their bodies over to the lure of the beat. The real star of the evening though was Big Chief Alfred Doucette (pictured below) – the main singer but also a Mardi Gras Indian Chief. If I’m really lucky when I travel, I meet someone special, a person who truly embodies the city I’m visiting in every way. Big Chief Doucette was one of those people, and I’ll never forget him. I know that one day I’ll return to New Orleans for Mardi Gras to see him parade in his full feathered hand sewn costume. That’s my dream!

In the meantime all I can do is urge anyone visiting the Big Easy to swing by the Ooh Poo Pah Doo Bar, as I promise it will change your experience from just a generic guidebook trip to a truly extraordinary one. 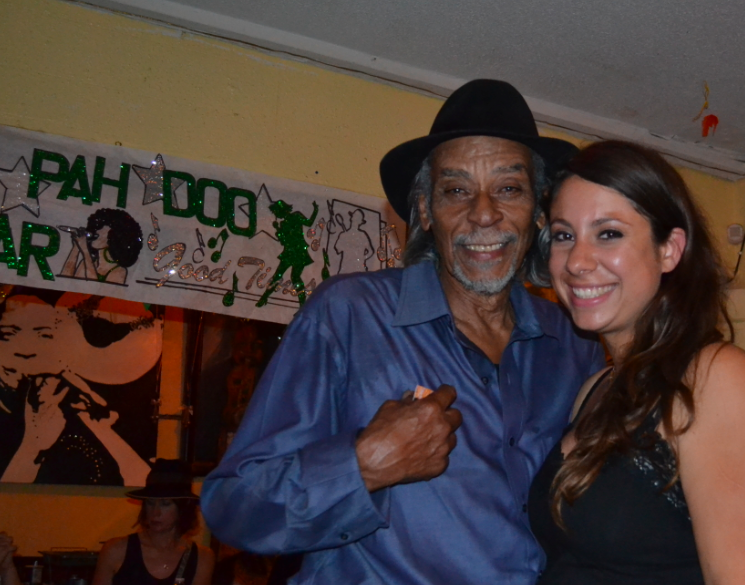 The Ooh Poo Pah Doo Bar to the right of the photograph (with the brick facade) on a very unassuming street in Treme. 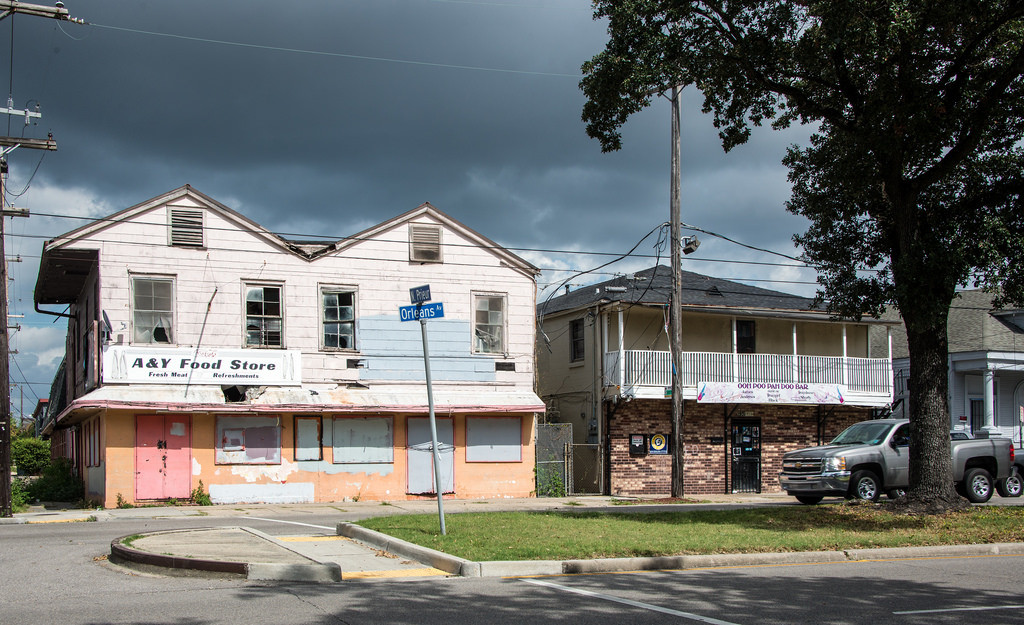