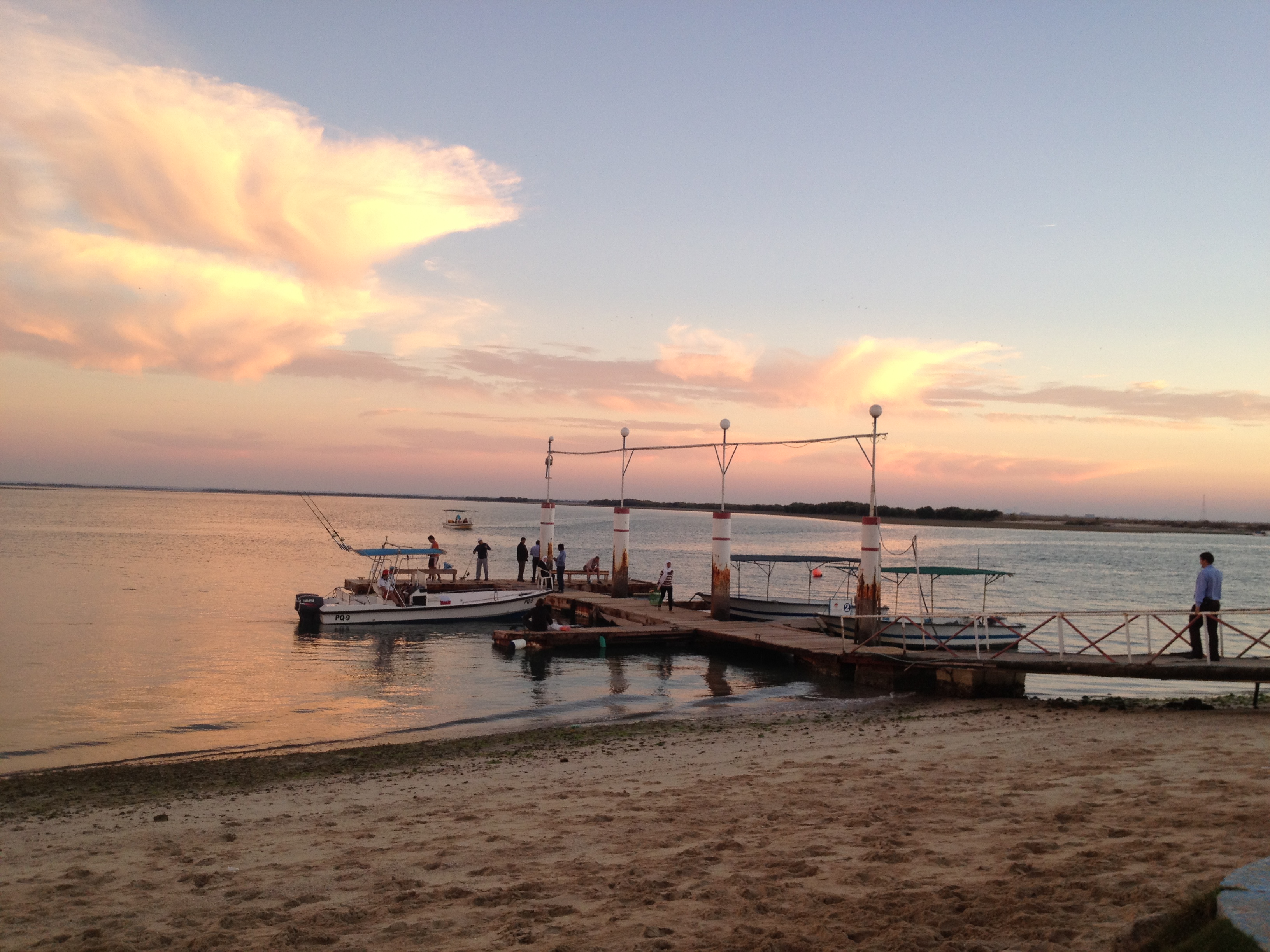 One of the most unusual and exciting things I have ever done is to go crab hunting in the shallow flats of the Persian Gulf off the coast of Umm al-Quawain. It was all organised by my best friend who I went to visit in Dubai while she was working out there for 6 months.

Umm al-Quwain is a bizarre place – the least populous of the Emirates and frequented mainly by Russian tourists. I can’t say I saw much of it. We drove from Dubai, through Sharjah – the dry state – and straight through Umm al-Quwain to our resort on the beach.

Flamingo Beach Resort off season was an eerily empty sea of green – including one very green pool, while pink flamingos graced the lawn. The hotel staff only spoke Arabic and Russian, and we were shuffled outside to a table on the beach while we waited for sunset. 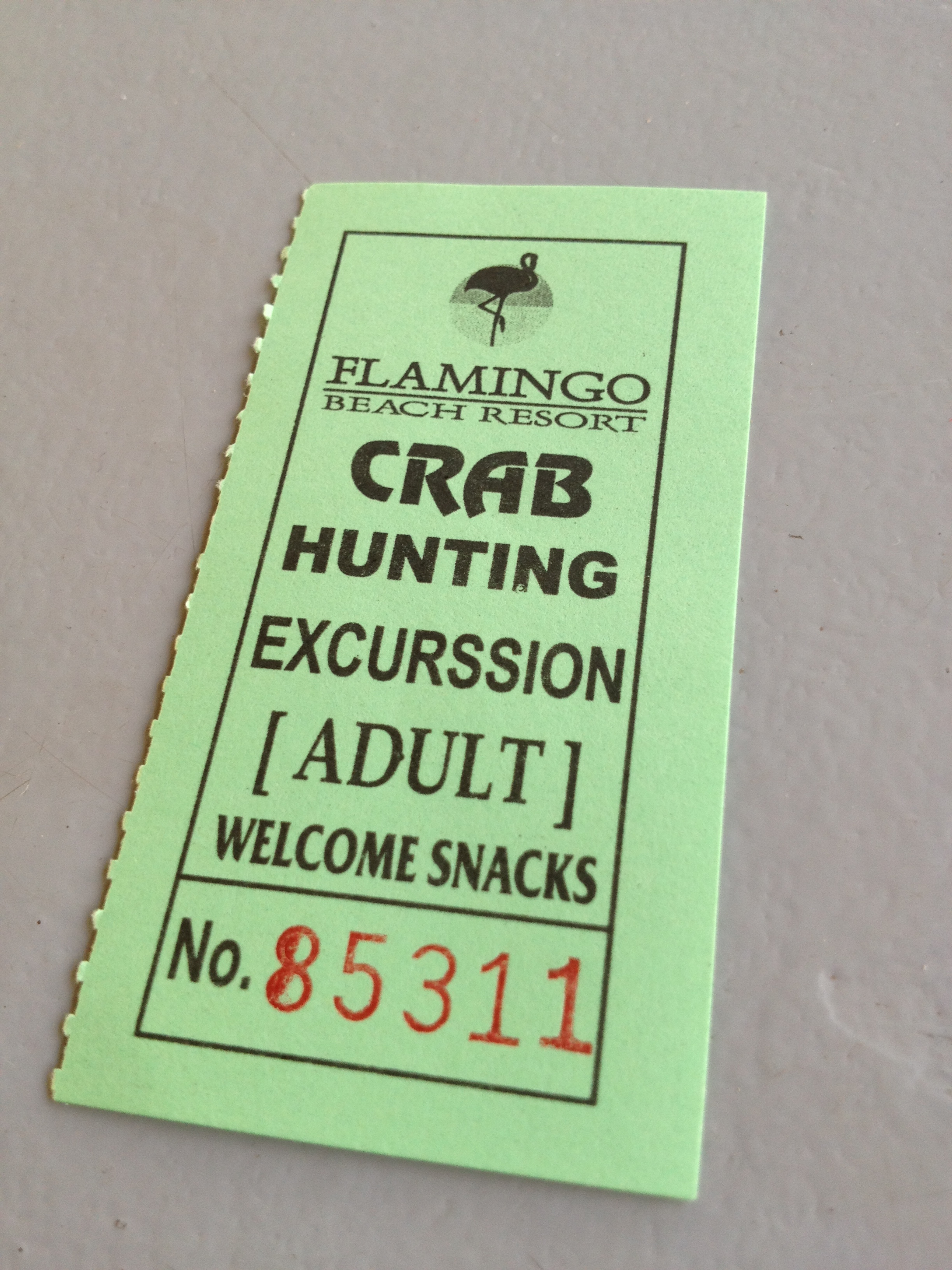 The five of us sat chatting and laughing by the calm sea as the sun slowly fell from the sky, leaving behind a blush of exotic pink which was soon tinged with darkness – it was time for our adventure at last!

First, we were fitted with life jackets and shoes (if you have aqua shoes, feel free to bring those instead as they’re likely to fit better!), then we were led out to the boat. There were around 10 of us in total on the boat along with a friendly Indian guide (who also spoke no English, but plenty of Russian). While we were all wearing swimsuits/bikinis or more modest t-shirts and shorts, one of our fellow boat companions was in a full burqa, which to us seemed like very cumbersome hunting gear. She was, however, only along for the boat ride to watch her husband and son, so for those of you who don’t fancy the night time swim, you can just come along and watch!

We drove out across the quiet waters for what seemed like an eternity. Every time we thought we were going to stop, we changed direction and carried on. We started off chattering away happily, but as we continued further and further out into the unknown we were hushed by the magic of the moonlit night. 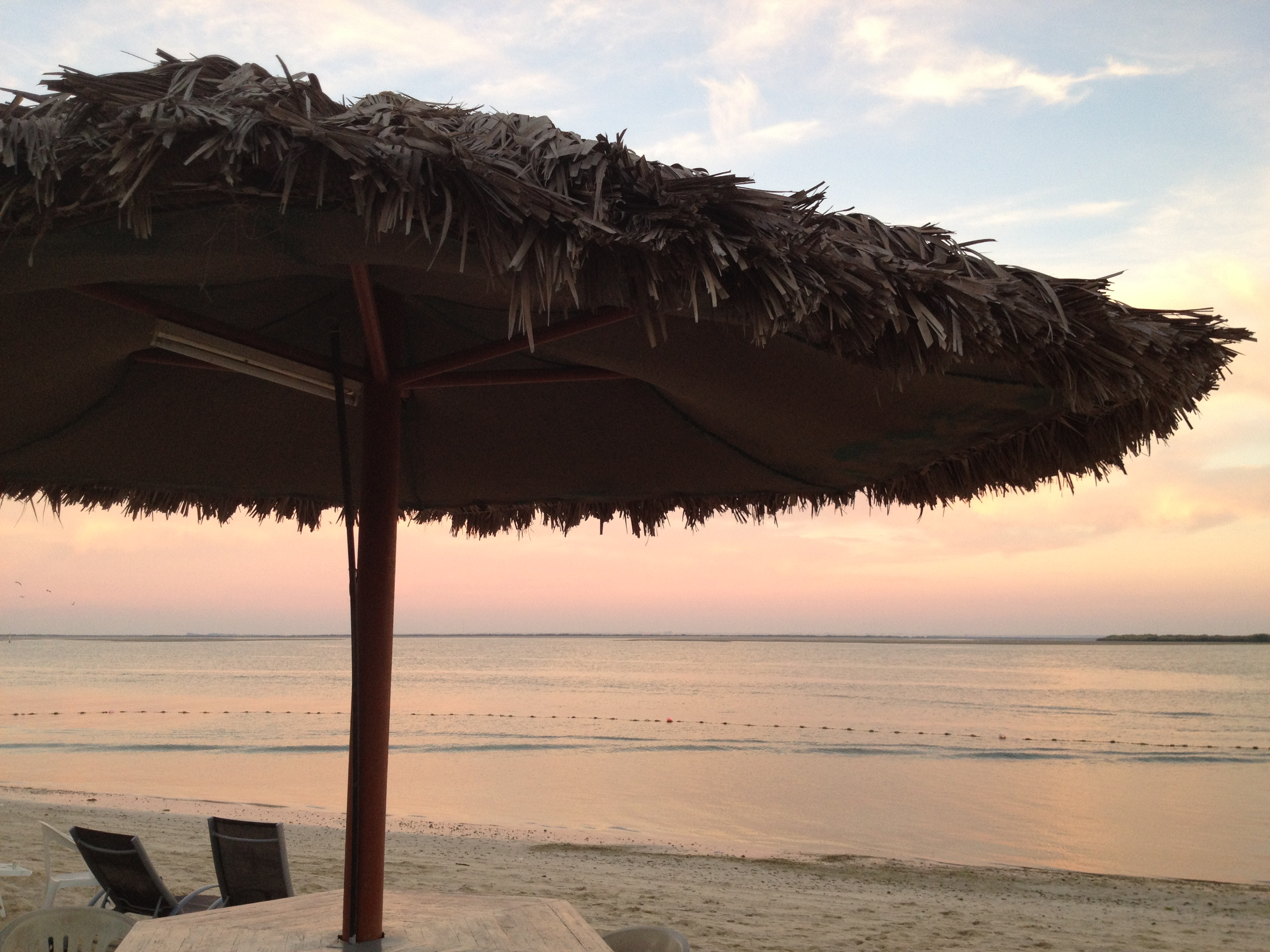 Finally, our boat spluttered to a standstill and bobbed up and down on the small waves expectantly. We clambered over the side so we were waist deep in the warm salt water and, armed with a large underwater lamp between two and what I can only call a trident, set off into the night.

Our lamps were attached the boat so we wandered forwards together, pulling the boat along behind us. We would have been a strange sight to anyone who didn’t know what was going on – an odd medley of people brandishing tridents pulling an empty boat through one of the most unpopulated areas of the world. If I didn’t have photographic evidence I was there, I might believe it was a dream.

Crab hunting is tricky business. If you walk too fast, you kick up the sand and can’t see the sea bed. We quickly learned to creep forwards stealthily, attached to the boat and therefore the others, yet also making our own path. The crabs danced around our feet, seemingly unperturbed by the repeated stabbings that narrowly missed them. After a while we slowly got the hang of how to use the tridents, and all too quickly our competitive natures took over. I think the prize of best crab hunter had to go to my friend Tina though who managed to spear two crabs in one – I’m still not quite sure how! 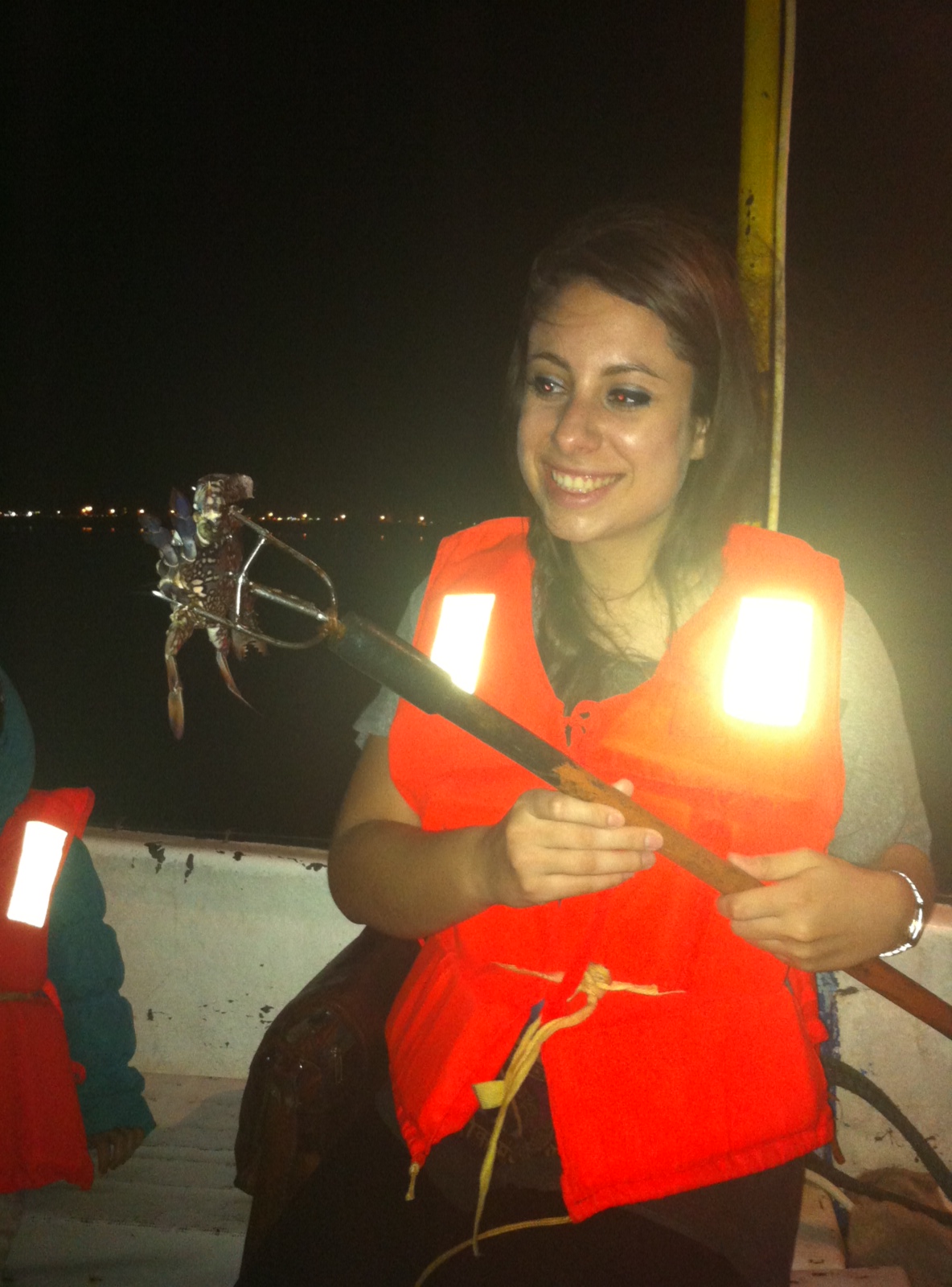 After a successful harvest we got back up onto the boat, and headed back to shore, a little cold now and a little bit sleepy.

A large open fire awaited us on the beach along with a huge spread of food – hot and cold, sweet and savoury. Our crabs had disappeared while we were eating, but half an hour later a plate piled high with boiled crabs was returned to us. It didn’t take much for us to discard the sweet nectar filled fruit for the sweet white crab meat.

It was the first time in my life I had eaten something that I myself hunted and I think we all felt a certain sense of accomplishment and pride. I do wish however that instead of boiling the crabs plain, they had included some spices or flame grilled them on the open fire till the shells were nicely blackened. 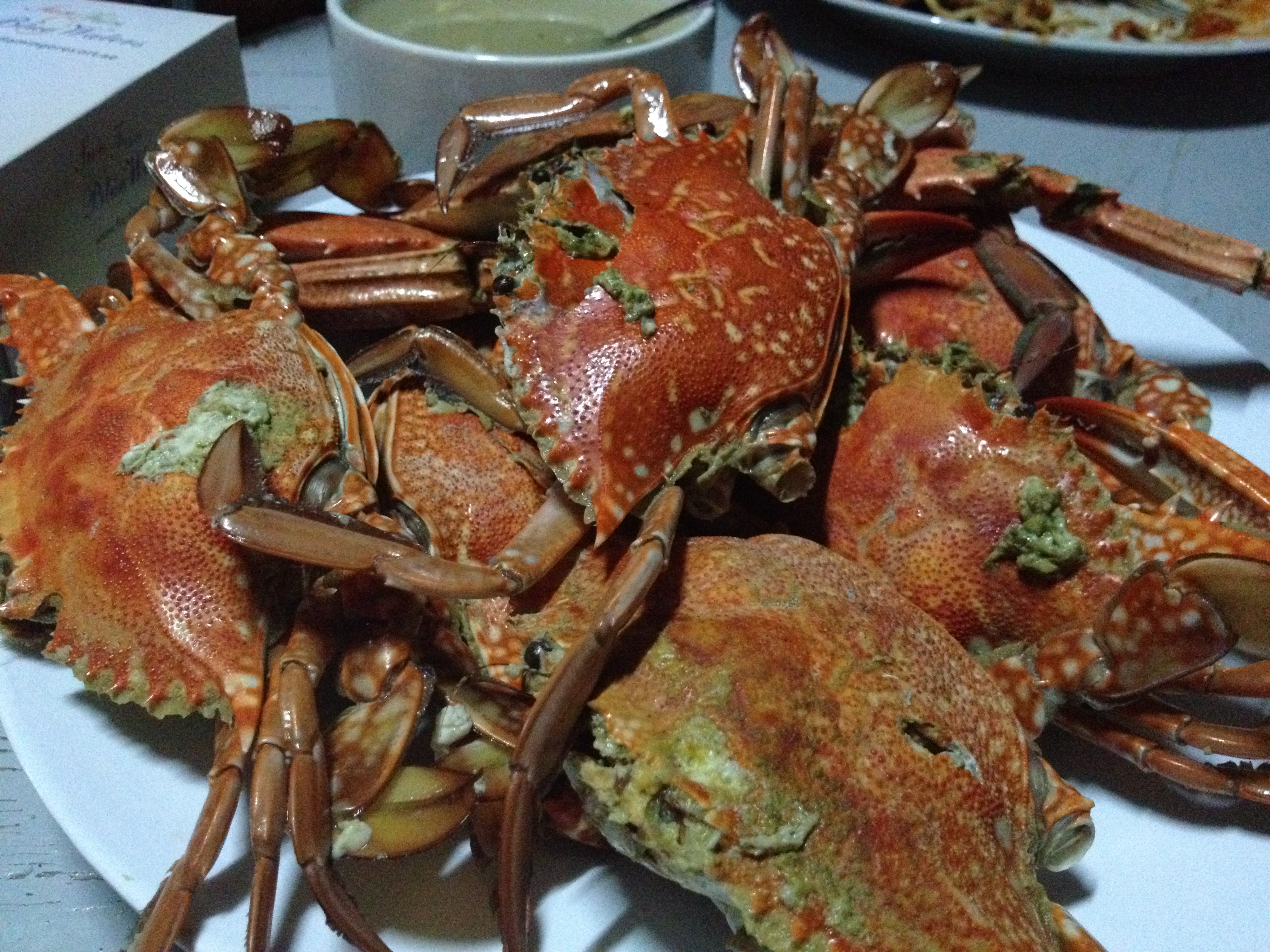 Though we couldn’t see much in the dark, I feel that the beaches and sea would be an incredible place to visit during the daylight – definitely a reason to be tempted back to Umm al-Quwain. The seven sandy islands of Al Sinniyah, Jazirat Al Ghallah, Al Keabe, Al Sow, Al Qaram, Al Humaidi, Al Chewria and Al Harmala just off the mainland are surrounded by dense mangrove forests and are separated by deep creeks. The sand and mud flats and the creeks are home to a number of birds and wildlife, including flamingos (hence the name of the resort), socotra cormorants, black-tip reef sharks and green turtles. I love absolutely love snorkelling and would love to go back to see what else dwells under the water.

This was one of the most exciting and surreal experiences of my life, and I’ll never really forget it!