Whenever I go back home to Madrid to see my family, we try to get away from the city for a day, driving up into the mountains and out into the wilds of El Cid country. On this occasion we decided to go to Peñafiel, situated in the famous Ribera del Duero wine valley which produces some of the best (and most expensive) wines in Spain!

Foothills of the mountains that encircle Madrid

The journey from Madrid to Peñafiel is only about 2 hours by car and the scenery along the way is ruggedly beautiful – red earth, dry yellow grass, fairytale medieval castles sitting atop plateaus and, once you get close, field after field of vines. Don’t be put off by the hideous corrugated iron factories at the outskirts of the village – just think of them as a dragon protecting it’s treasure. And this village is a real treasure! 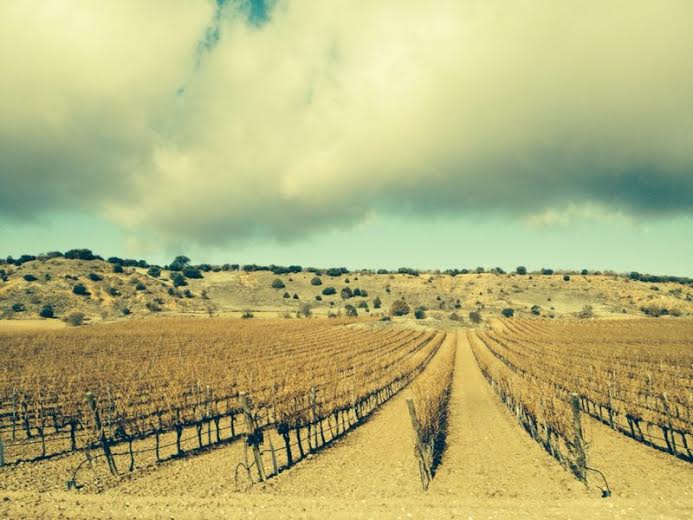 Vineyards in the Ribera del Duero

Wander around the old town 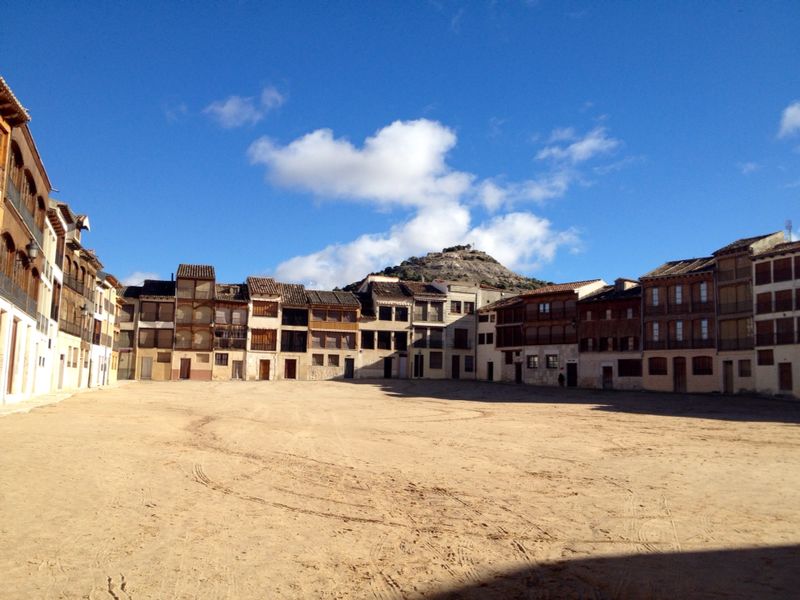 The first thing I recommend doing is just to wander around the old town, taking in the beautiful houses. Make sure to stop off at the Plaza del Coso – the arab-baroque style square at the heart of the town, used for bullfights and bordered by houses with intricate filigree balconies and old wooden shutters. The rights to use the windows and balconies as viewing points during the bull fights are owned by the town and can be auctioned off before a fight. We were told that in reality this right isn’t generally exercised though.

Balconies in the Plaza del Coso

The old town is littered with beautiful old churches and buildings; my favourite however was the Convento de San Pablo – a Catholic church built on the remains of the Alcázar of Alfonso X, which was later converted to a monastery. The architecture of the monastery may strike you as somewhat Moorish in style and that is because it partly is, specifically Gothic-Mudéjar. The Mudéjar style of architecture enmerged in the 12th century as a result of Christians and Moors living side by side and is characterised by intricate and beautiful geometric shapes, simple materials (such as bricks) and elaborate tilework in the interior. The medieval writer and nobleman Don Juan Manuel is buried within. 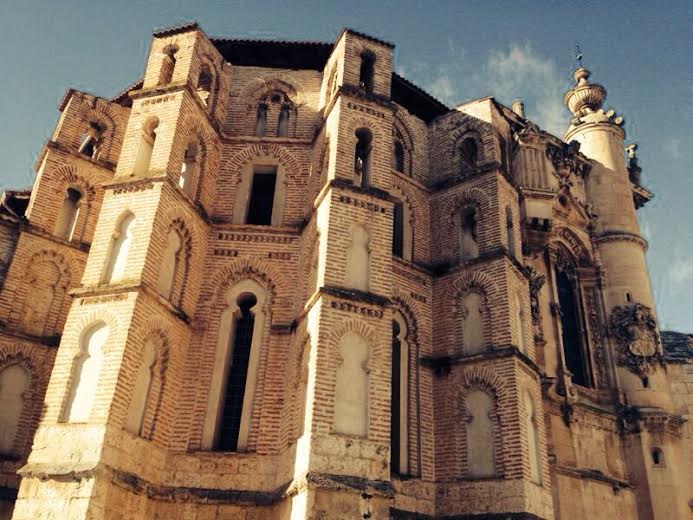 Eat some tapas for lunch

In small, traditional towns like Peñafiel you will come across many restaurants which in my opinion are overly formal and rather stuffy. Despite being located in old buildings, the restaurants are almost always stripped of any vestiges of their history. White walls, tablecloths, too many sets of cutlery and a fluffed up menu are the norm. I have always found that you’ll have a much better meal (and experience) by choosing to eat in the bar area of the restaurant (as long as you don’t mind noise!) and order from the extensive menu of raciones (small hot dishes). 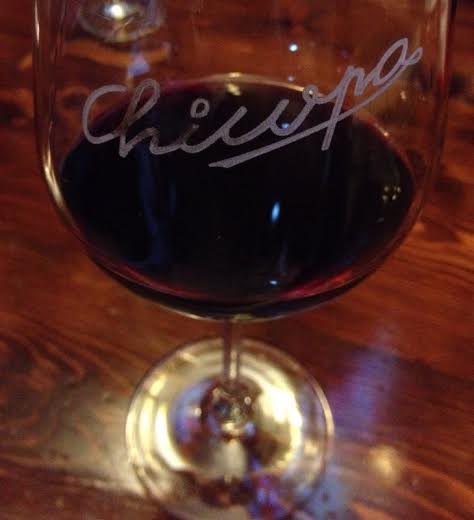 We were advised by a local person to go to Bar Chicopa and we really enjoyed it. The food was delicious, the wine was equally good and incredibly good value and the atmosphere was buzzing. We ordered boquerones fritos (little fish), gambas al ajillo (prawns with garlic and dried chillies – these were so delicious), patatas bravas, a plate of jamón ibérico and croquetas al jamon. A glass of good red wine was €1.20 however we also tried a glass of Vega Sicilia red – a cut above the others, which was €2.50. Compared to London the prices were incredible. Dominio de Pingus is perhaps the most famous wine name of the region, mainly because of its price – expect to pay around €300 or more for a bottle! 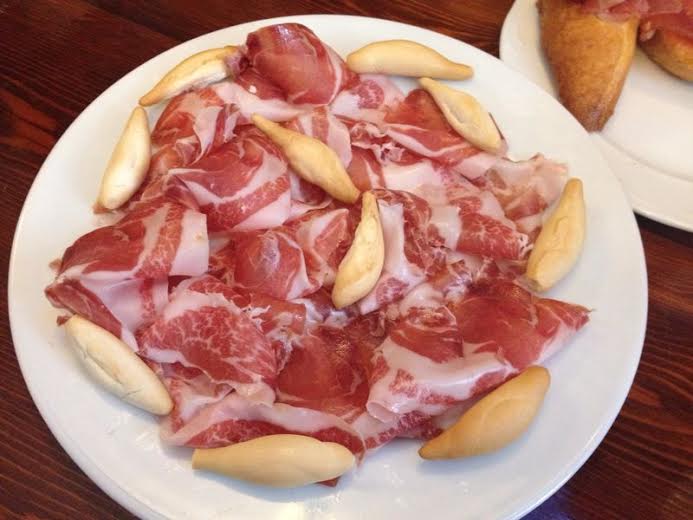 After a leasurely lunch we went to Hotel Convento Las Claras for a drink, however to be perfectly honest I wouldn’t recommend visiting this place at all. The building, built in 1606, has been so disappointingly restored that it was pretty much ruined in my eyes. The old stone walled cloister had a very new looking alpine wooden balcony added to the top, the original floor was replaced with what looked like bathroom tiles, the furniture was uninspired and finally a glass box reception was built in the entrace hall, effectively destroying the view of the only remaining lovely feature – the beams! 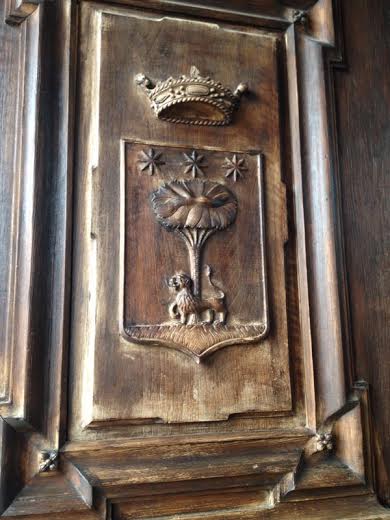 Walk on the walls of the castle

The castle of Peñafiel is perfectly positioned, seated atop a hill and overlooking the once walled city. There is evidence of fortifications being built here as early at the year 943, it was taken by the Arabs in 983 and reconquered in 1013 when the name was changed from Peña Falcón (falcon rock) to Peñafiel (loyal rock). It is said that when it was reconquered the Count Sancho Garcia proclaimed: ‘from this day onwards, this will be the most loyal rock in Castille’. 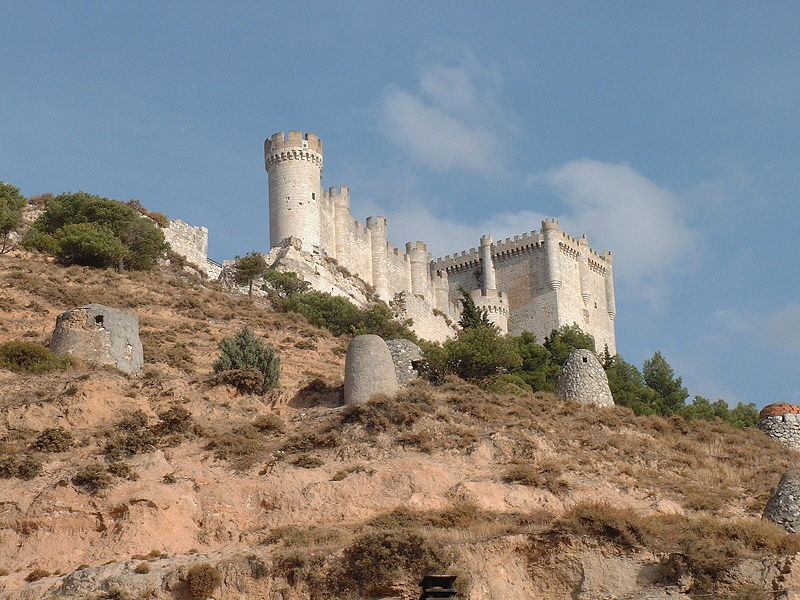 Peñafiel Castle with the wine cellar chimneys in the foreground. Image source:
http://commons.wikimedia.org/wiki/File:Castillo_de_Penafiel_7111.JPG

The present castle was never designed to be inhabited on a permanent basis – and was only occupied if the town was threatened or also for visiting noblemen. The whole castle only has one lavatory which still exists today -you can take a 40 minute guided tour of the castle which was very interesting, however it is available only in Spanish. The castle houses a wine museum for the region (Museo Provincial del Vino de Valladolid), entry to which is separate to the castle, however we decided not to visit the museum.

A trip to this beautiful town would not be complete without also visiting one of many bodegas. The production of wine goes back a long way in the history of Peñafiel, and although most of the bodegas are now housed in modern buildings, vestiges of the old, traditional ways can still be found. The land surrounding the castle is dotted with chimneys which look a lot like fairy hills or gnome houses, built as ventilation for underground caves, some of which date back to the 15th century. These deep caves were used to store the wine because of the very constant temperature (15 °C) and humidity (80%) they maintained.

The state of the art Protos bodega (pictured below) offers a 90 min tour, complete with tastings for just €10 which I would highly recommend. The wine is considered one of the best in the region and the tour also stops by the old bodega underneath the castle. 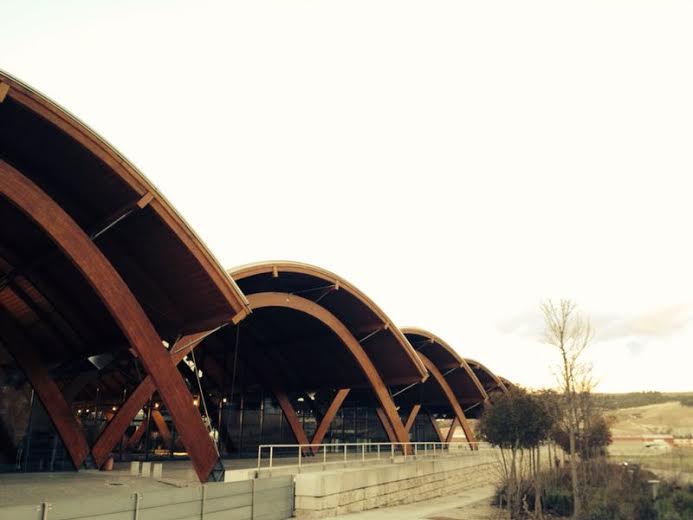