By Sarah Alexandra George Tuesday, August 26, 2014 2 Travel Cumbria, Elterwater, Elterwater Hostel, hiking, Lake District Permalink 0
On bank holiday weekends there are always plenty of things to do in London, the city comes to life with excitement and anticipation. This time round though, I decided to leave behind the paved streets and wander out into the wilds of Cumbria for some much needed gulps of fresh air. 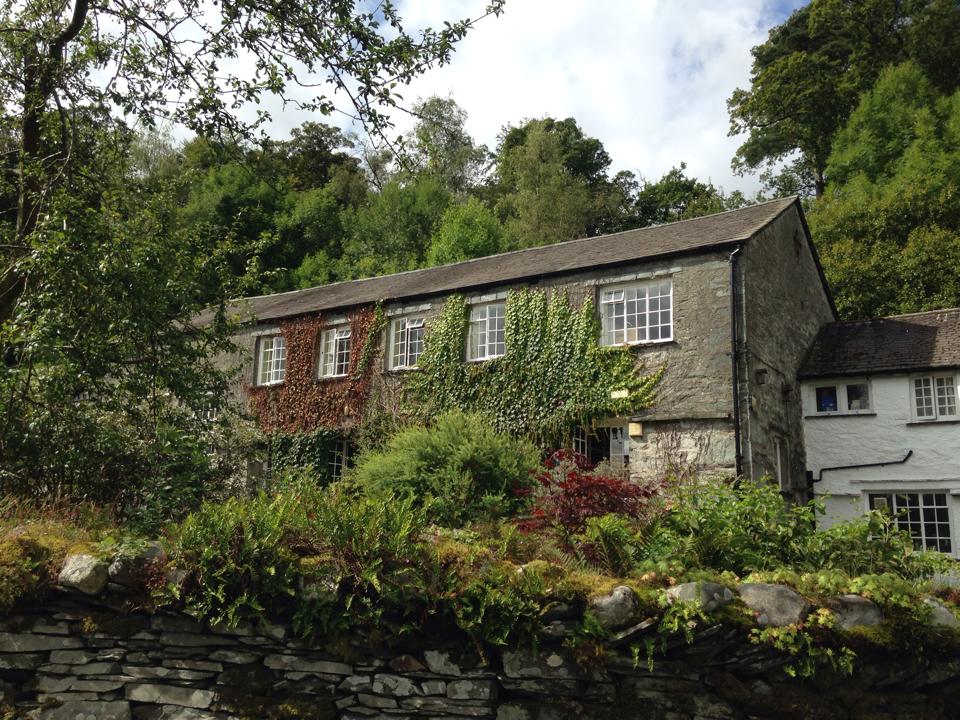 We decided to stay in Elterwater, a very tiny but perfectly charming village near Grasmere. It was a chance find based on what was still available at the last minute but after seeing a lot more of the area I’d definitely say that we were incredibly lucky as in my opinion Elterwater was by far the prettiest place to be! 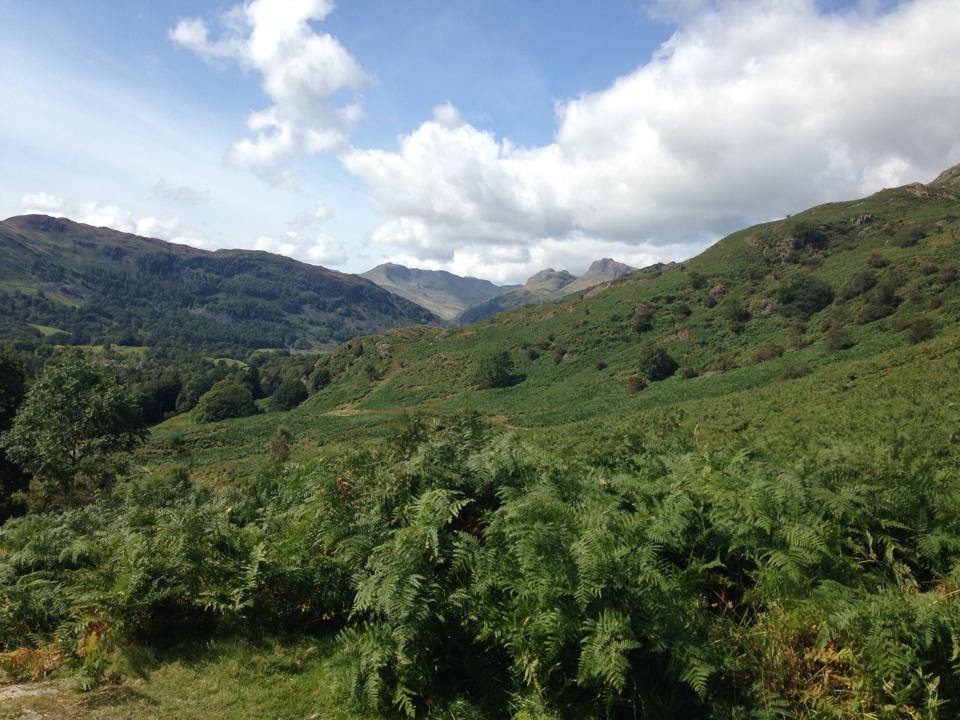 When we arrived the little stone village was lit up magically by the suns rays, the eager stream gurgled happily under the bridge and black and white sheep drifted across the roads, obliviously. The village is nestled in a little valley of emerald green ferns, and embraced by the tall craggy peaks that surround it. 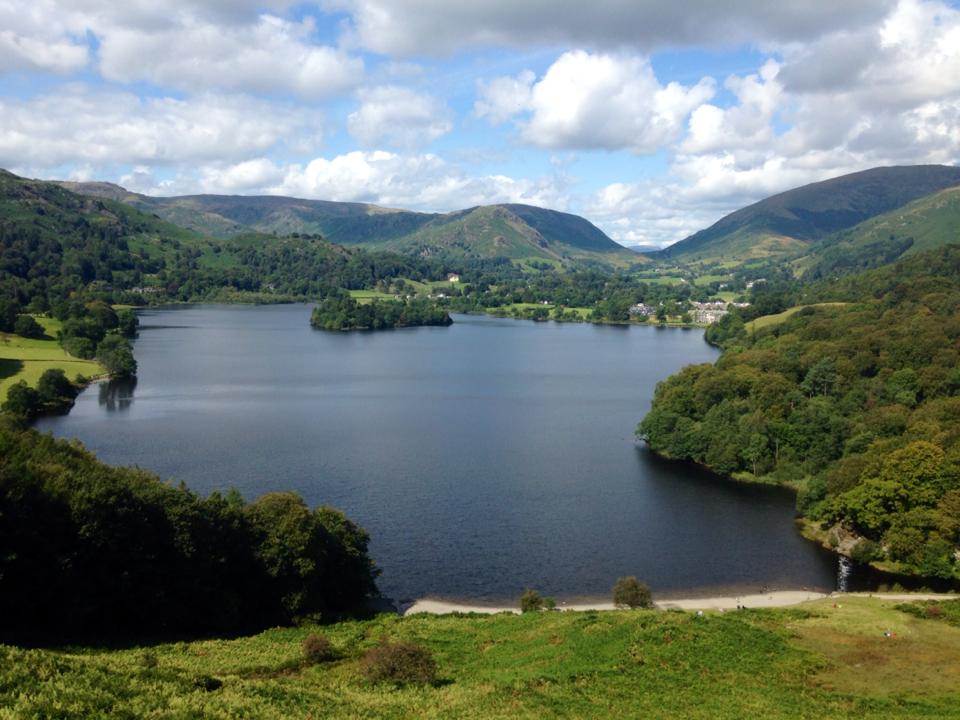 Elterwater hostel, a pretty stone building covered in ivy, is very conveniently located close to the bus stop and the Britannia Pub. It’s a standard hostel – once run by the YHA, the rooms are simple, spartan and clean which is what you want from a hostel. I wouldn’t say the 2 person room is worth the extra cost at £53 a night but the dorms are £8 a bed which is a very good deal. Unfortunately they only have single sex dorms, so not many options for couples travelling together! 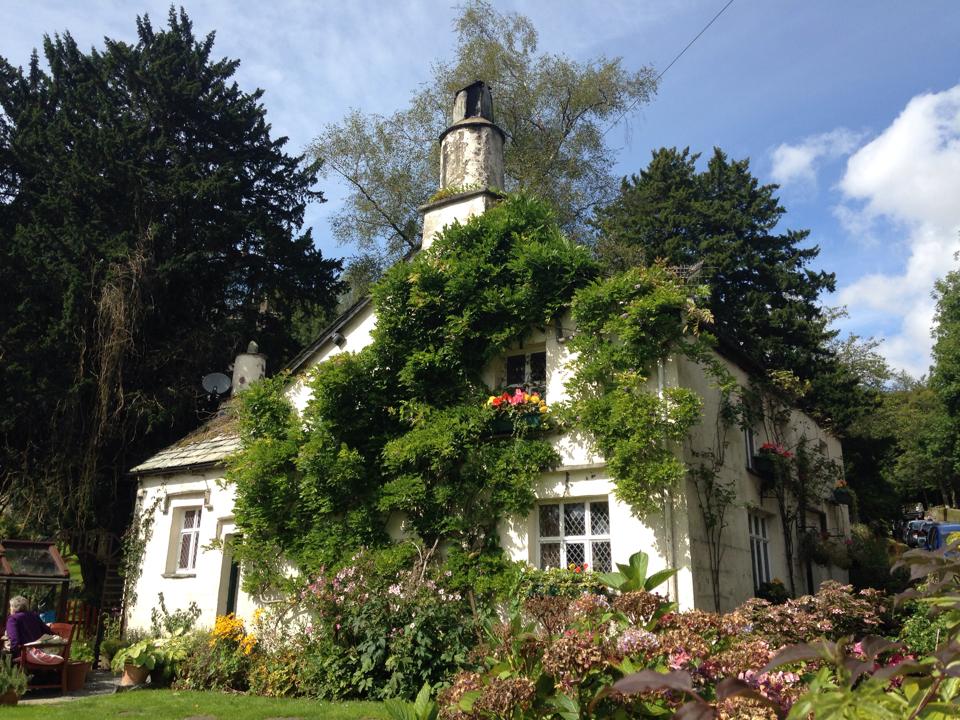 The people who run the hostel are really lovely, really friendly and really helpful, especially the ruggedly handsome blonde man, who gave us a ton of advice on what to do each day and where to walk (he also gave me free shampoo which was much appreciated). 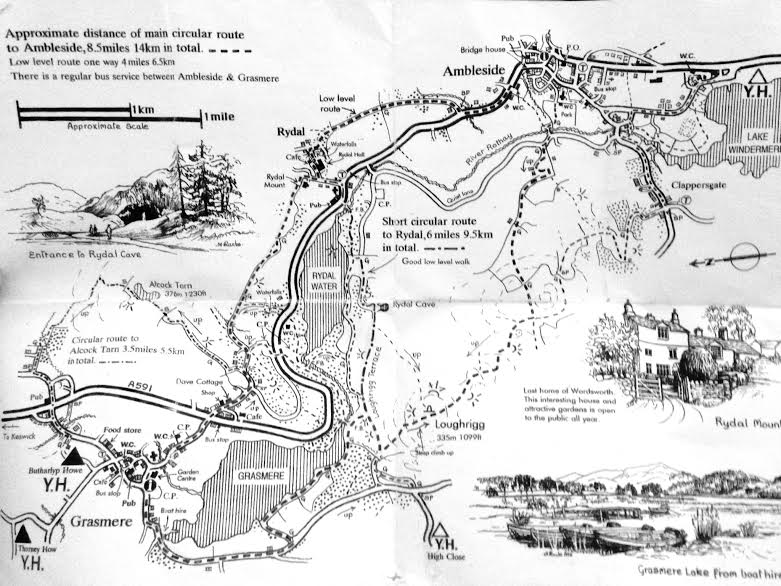 On the first day, we walked up to Rydal and back on a lovely walk that looped around both Grasmere and Rydal Water. The sun was streaming through the wisps of clouds and we couldn’t help but smile with wonder at the beauty of Mother Nature. Tiny butterflies flitted to and fro as we skipped across stepping stones, over streams and then walked down along the bank of the lake.

We stopped off at Rydal Hall for a quick walk around the immaculately designed garden. While I can’t deny it was very elegant and well groomed, I couldn’t help but prefer the wilderness beyond the gates. 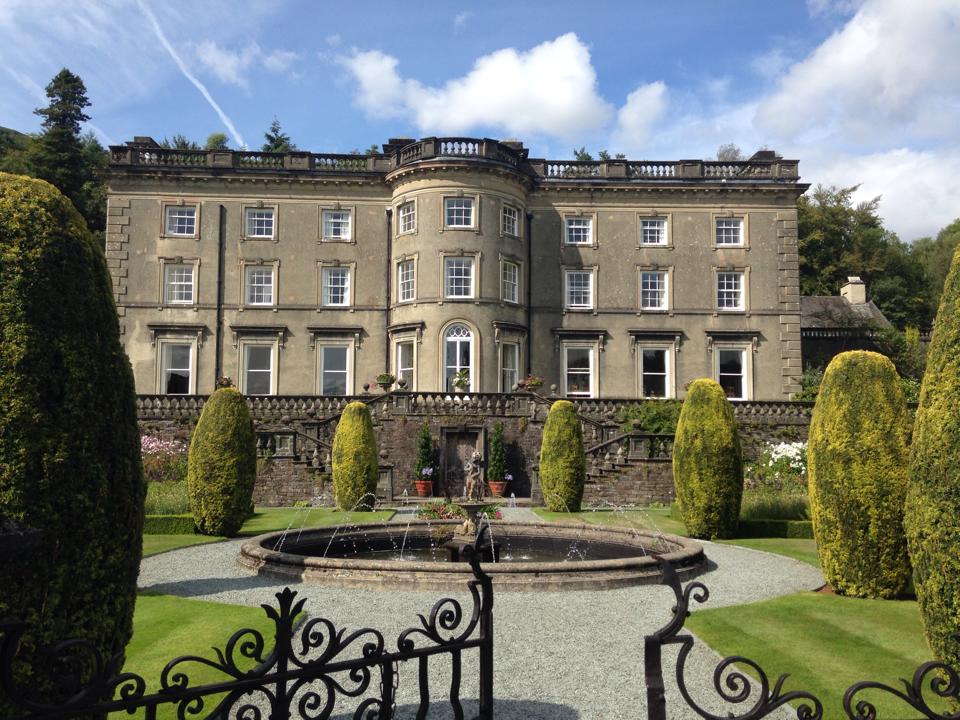 When we decided to go to the Lake District, I was determined that we would go and visit Dove Cottage, the home of William Wordsworth for eight of the most literary inspired years of his life. Entry is around £8 for adults (concessions are as always available) and it’s probably the first time I’ve thought the entry was really worth it.
You follow a guide around the cottage – she was one of the best spoken and knowledgable guides I’ve ever had and she also managed to make us laugh too which is always welcome! Afterwards you can wander around the house to take a closer look at the little artefacts and miniatures on display. My favourite was the portrait of Wordsworth’s dog, Pepper – a border terrier gifted to him by Sir Walter Scott who bred the feisty terriers. 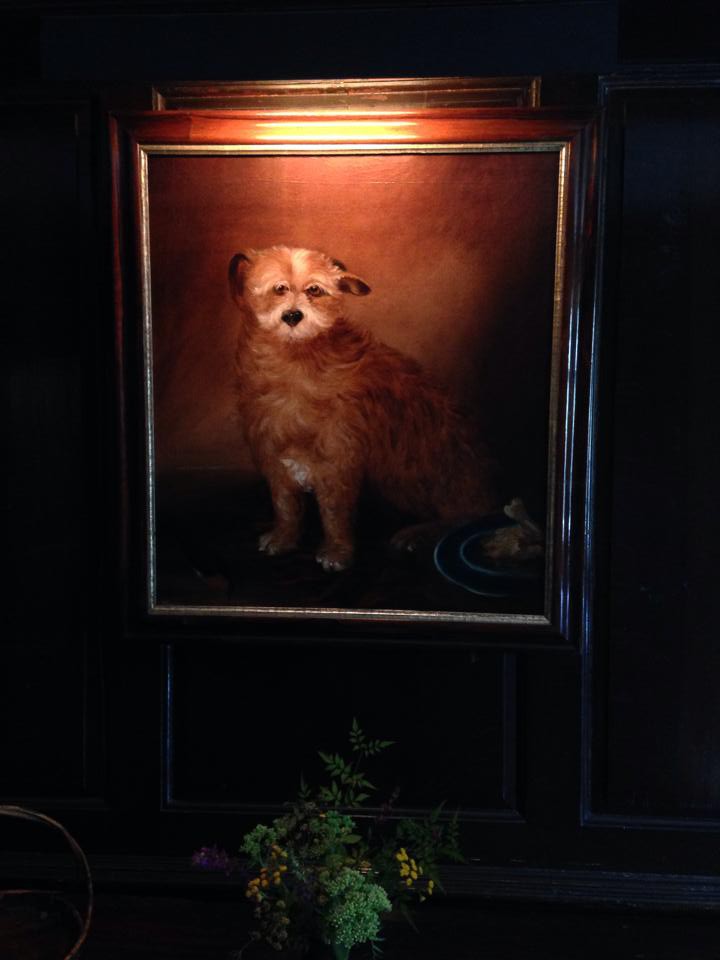 A portrait of Pepper

William Wordsworth’s house is a dark gloomy place on the ground floor. Dark wooden panels, tiny windows and only cheap mutton fat candles would have made for a black and smoky den. The upper floor in comparison is soft, pink walls turn golden in the golden light that streams in through the windows.

Apparently the house once housed 14 people including his wife, children, sister, sister in law, and a number of writer friends who thought the house was blessed by the muses. One writer, Thomas de Quincey, moved in permanently! He is best known for his essay ‘Confessions of an English Opium Eater’. I’m sure he made for a fabulous house guest!
The garden outside was the pride and joy of William and Dorothy, who described it as their ‘little domestic slip of mountain’. The view from the garden would have one time looked out over Grasmere lake, which can no longer be seen, however the garden is filled with a rainbow of coloured flowers that keep the spirit of the nature poet alive.
I’ve watched you now a full half-hour;
Self-poised upon that yellow flower
And, little Butterfly! indeed
I know not if you sleep or feed.
How motionless!–not frozen seas
More motionless! and then
What joy awaits you, when the breeze
Hath found you out among the trees,
And calls you forth again!– To a Butterfly (Wordsworth) 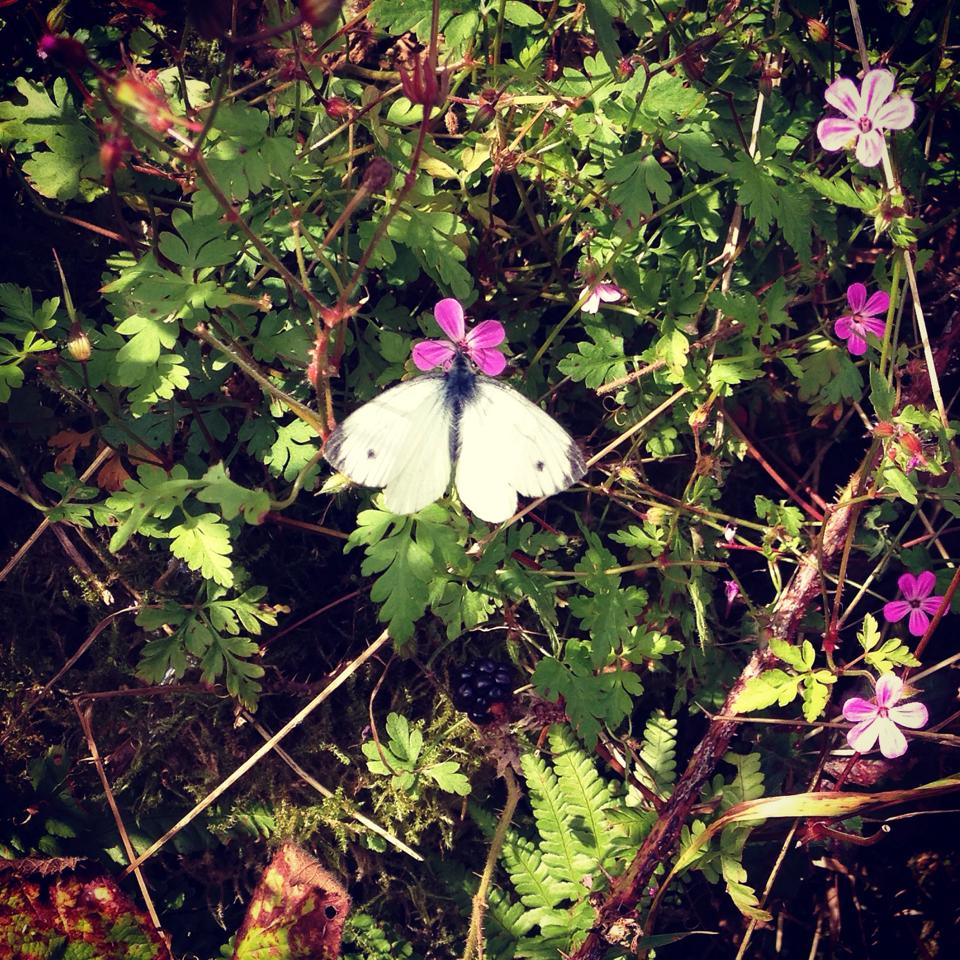 After our lovely welcome at Wordsworth’s home, we stopped off at a nearby cafe for afternoon tea, then wandered on into Grasmere. The pretty village is a lot more touristy than Elterwater which is to be expected given that it was the home of Wordsworth, but we took the opportunity to stock up on Kendall Mint cake (white, brown and chocolate covered – I personally recommend chocolate covered!)
On the way back to Elterwater, we happened upon a place called Faeryland. I would strongly recommend stopping off at this tea shop as they rent out proper wooden rowing boats. We didn’t make it out onto the lake this time, but stopped for a few moments to watch a white boat glide along the still water like the swans that Elterwater is named for.

We ended the evening with a lovely meal at the Britannia Inn in Elterwater (I recommend the Lamb Henry) and a pub quiz! 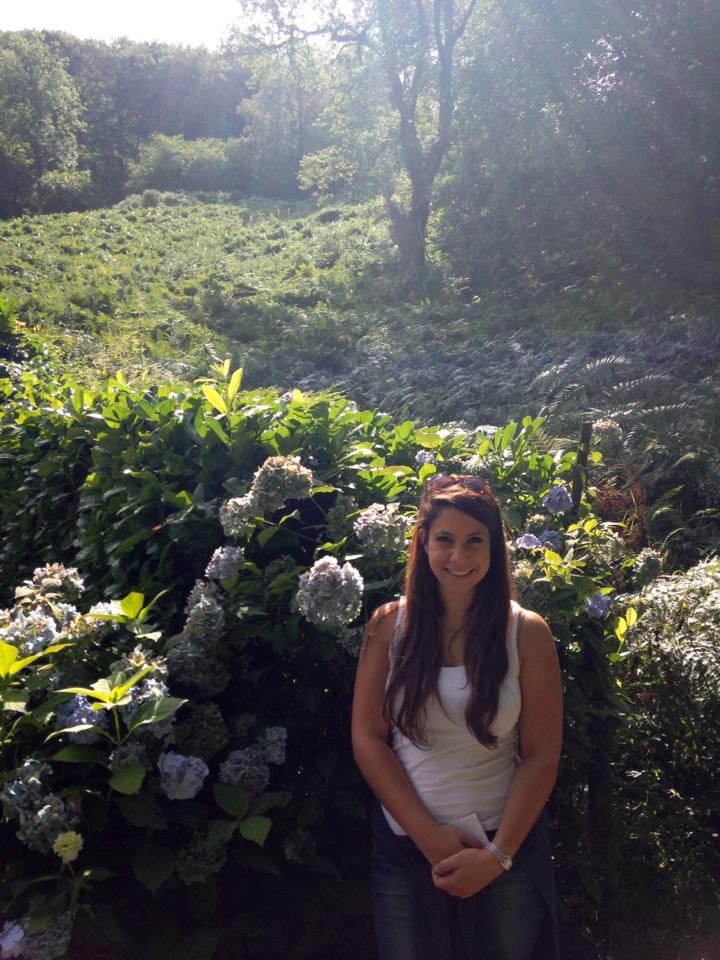 On the second day, we set off to hike up to Stickle Tarn. The 516 bus goes from Elterwater (opposite the Britannia Pub) to Stickle Barn – you can ask the bus driver to stop there (instead of going on to Dungeon Ghyll and then walking back).

The hike up to Stickle Tarn takes anywhere between 45 mins and 1.30 depending on how quickly you walk. It’s pretty much a mix of big steps and scrambling up rocks, as you walk up along side the waterfall (Stickle Ghyll).

When you get up to the tarn (lake) you can continue the walk up above or turn around and walk back down. I couldn’t really handle much more as I was shattered from the climb, however we sat for a good long while up there, with the sky, and the sheep. 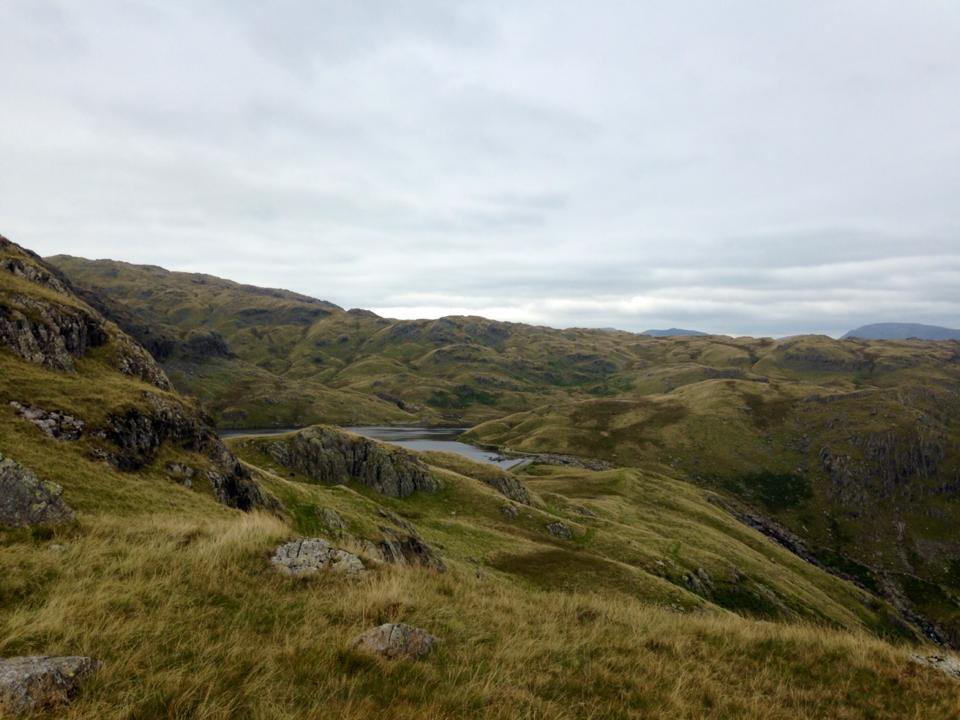 The view from Stickle Tarn is indescribable. I usually find the English countryside rather tame looking with its green rolling hills, but for the first time I felt a sense of wild power in this county.The wind is strong – it whips around you and buffers you relentlessly: above the soft lakes and green fields of the valley lay another world. With my hair flying out like serpents around my head, I truly felt like some ancient British queen or goddess, deeply connected to the earth on which my shaking legs stood. 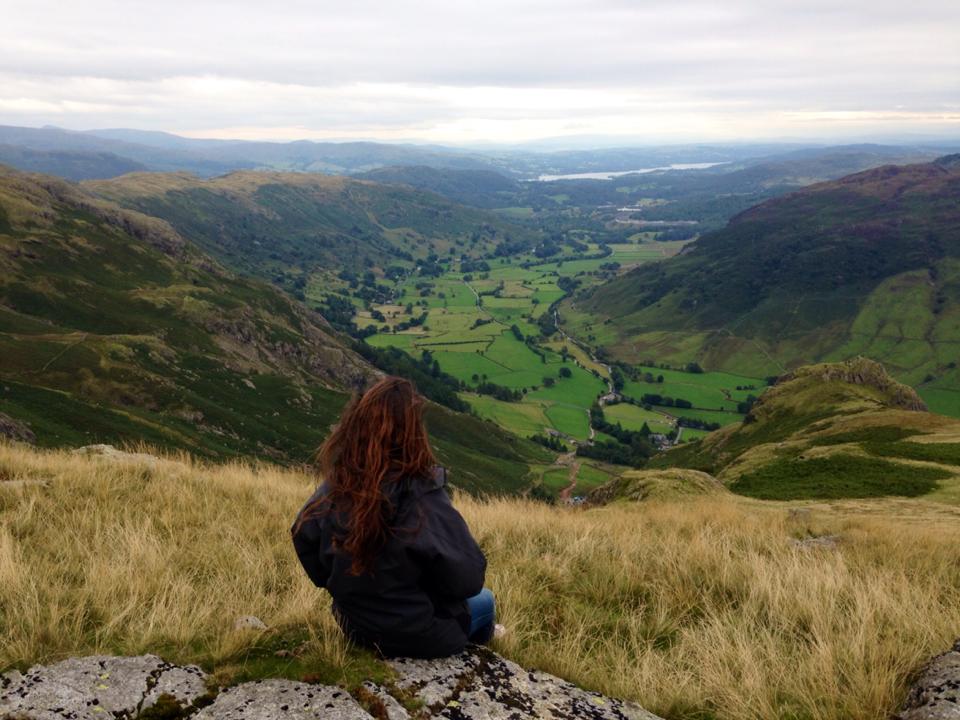