I love to write about travel, and nothing has opened up the world of travel to us so much as aeroplanes, so I decided to call in an expert on aviation and early flights to give me a feel for what it was like – my father. Not only did he step onto some of the pioneering commercial aeroplanes at a young age to travel, he later took to the cockpit himself as he wandered around the world. If anyone gave me my nomad yearnings, it was my father.

My first ever memory of flying, age four, was actually of the day before. I still recall sitting on my tricycle looking up into the sky and thinking ‘I will be up there flying in that aeroplane tomorrow.’

The flight itself was in an old war surplus Silver City Douglas DC3 airliner from Woolsington Aerodrome just north of Newcastle to Amsterdam Schiphol, and I remember it all very well. Of course to me it was a beautiful shiny aeroplane – my first. We walked from the terminal across the open tarmac over to the low door at the rear of the aircraft and stepped up a small step ladder into the plane. The DC3 was one of the last tailwheel aircrafts and inside we had to climb up the sloping aisle to our seats. Unlike modern jets the fuselage was really narrow with two small seats on one side and one on t’other. The 36-seater flew thrice weekly to Amsterdam compared with the four flights a day 180 seaters operated by KLM today ! 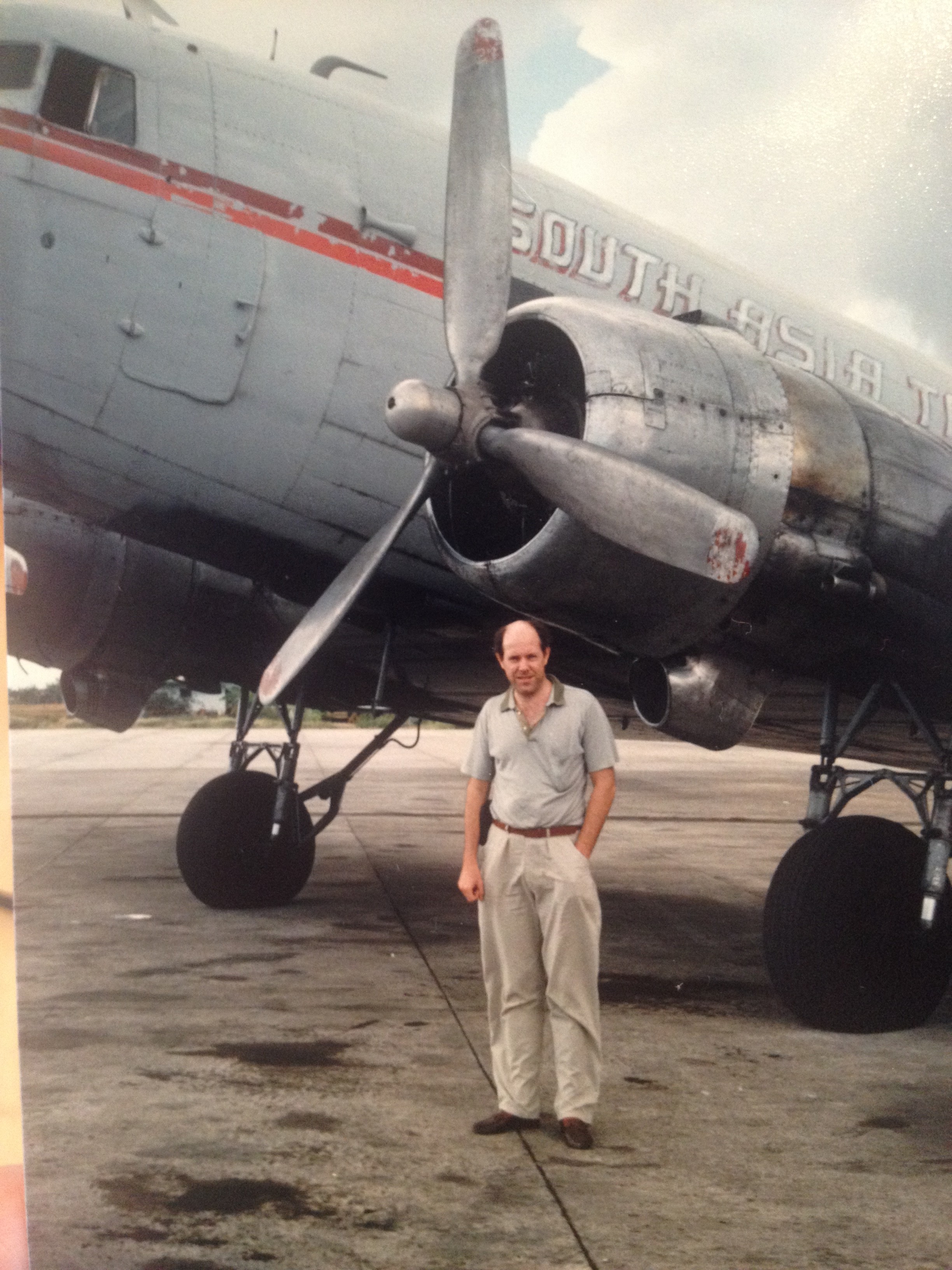 The experience of flying was totally different from today. For one thing, tickets were a lot more fun in the 50s! I remember my father coming home a few months before we flew anywhere holding a ticket for each member of the family. I was so excited to see my name on the ticket and the destination and date (which was a thick affair with the airline on the cover and inside a series of blue inked counterfoils).

Newcastle airport had opened in the thirties and after the war the terminal was just a row of wooden huts. The airport was a quiet place with only a few flights per day – flying was very rare and I remember my school mates being very jealous of my flying habit. Behind, the two-storey control tower was also made of wood and next to the huts was an enormous (to my eyes) hangar marked BKS Air Transport. There was no public transport to the airport and we were dropped off by a family friend and I remember the one big wooden door to enter the terminal up some steps.In those days suitcases had no wheels and you had to either lug them to the check in area or use a baggage trolley. Right in front was the check in area which consisted of a row of weighing scales (the big red scales with a giant dial on the side) and as I recall there were only 4-5 check in counters. BKS dominated the show as the main airline at Woolsington. Once checked in, we went to the waiting area in the same room and I recall on the wall a machine dispensing travel insurance. 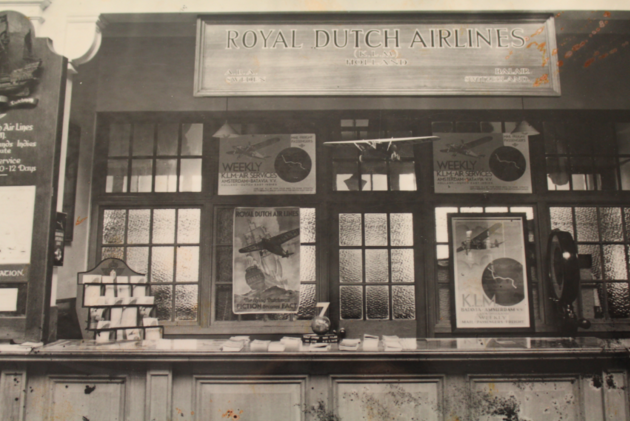 Another characteristic was the lack of the insulation that modern airports have which makes you feel hermetically sealed from the outside. In those days the silence was therefore interrupted by the excitement of the roar of the piston engines marking the arrival of an aeroplane and the startup of a departing flight! We would run outside to a marked off area in front of the terminal to watch a plane come in and disembark its passengers. As a teenager my father would sometimes drop me off in the school holidays to spend a sunny afternoon in this area watching the activities. And the planes would pull up right in front – typically a BKS Air Transport Elizabethan with its wing tips right overhead.

In the late 50s and early 60s the most common planes at Woolsington were DC3s, Airspeed Ambassadors operated by BKS and the Bristol Britannias which operated the five times daily London run. BKS flew the Elizabethans on daily flights to Dublin and Belfast as well as Isle of Man and Jersey. The daily Amsterdam flight was operated by Silver City Airways and later Handley Page Herald of what subsequently became British United Airways. Another airline which started operations for Newcastle during this period was Dan Air which started DC3 flights to Bergen and Derby Aviation (later British Midland Airways) which operated DC3s to the Midlands. In the early sixties the first charter flights to Spain started with BKS Vickers Viscounts and Britannias and Euravia flying Lockheed Constellations and later Britannias. All these aircraft were bought second hand and the early post war aircraft were mostly ex-RAF. The rapid development of commercial flights after the war in the struggling post-war economy was in fact the result of cheap war surplus aircraft and a large supply of trained pilots looking for work! 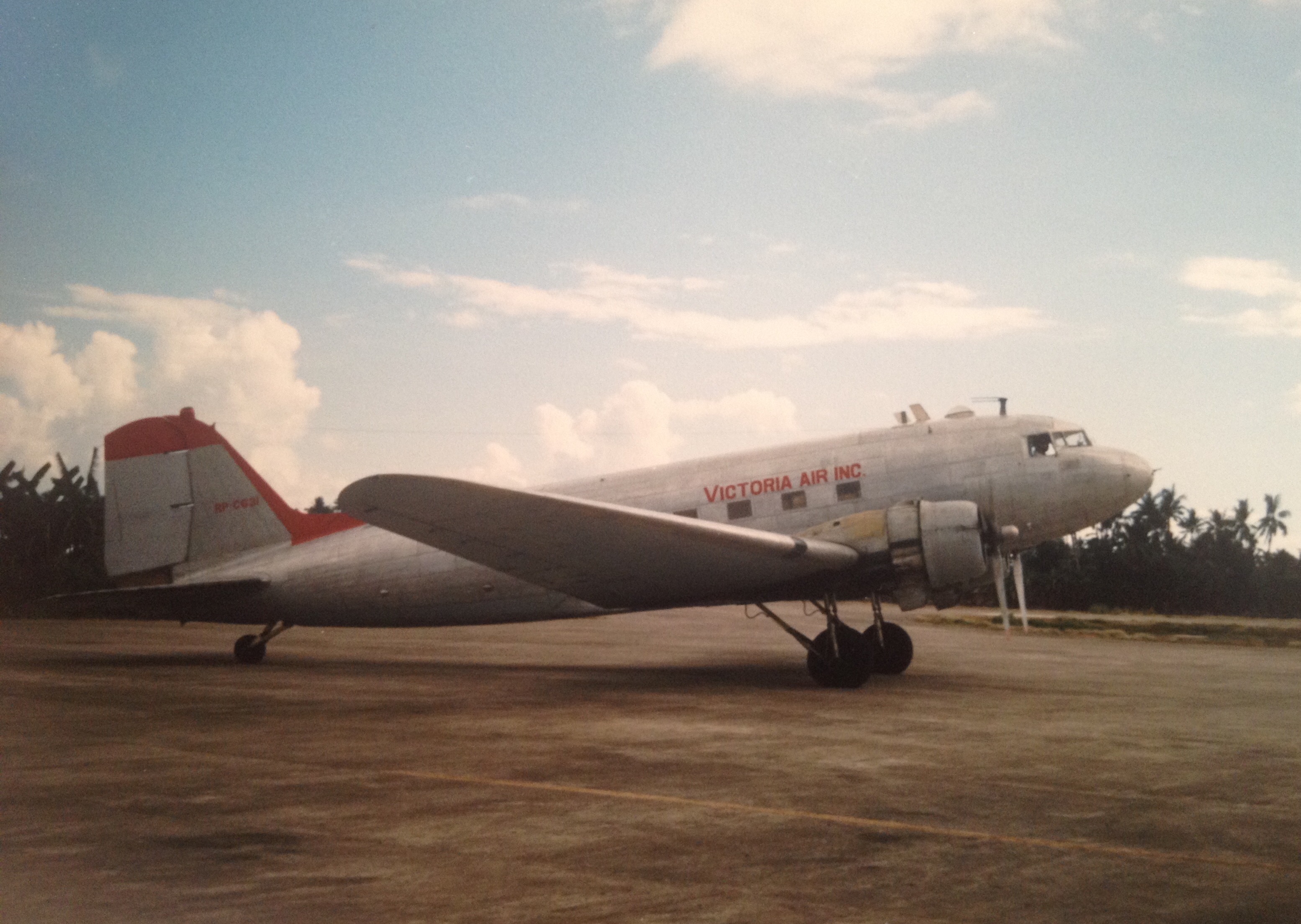 It was an unforgettable experience flying in these piston engined planes as they were very noisy. In addition to the background noise of the whole aircraft vibrating and making it impossible to hold a conversation, there was the superimposed beat effect most pronounced in the twin engined planes which meant that the general vibration waxed and waned. Take off was either really exciting or extremely frightening as the plane shuddered and shook as it accelerated down the runway. These aircraft were rather underpowered compared with modern aircraft and seemed to struggle to get airborne just as the end of the runway loomed up. Aircraft such as the DC3s were unpressurised and this meant that we cruised at much lower altitude than modern planes. Early in the flight the stewardess would bring round a large tray with boiled sweets to help you swallow and adjust to the low cabin air pressure. Flying at low altitude often resulted in a very turbulent flight and in those days airsickness was all too common! 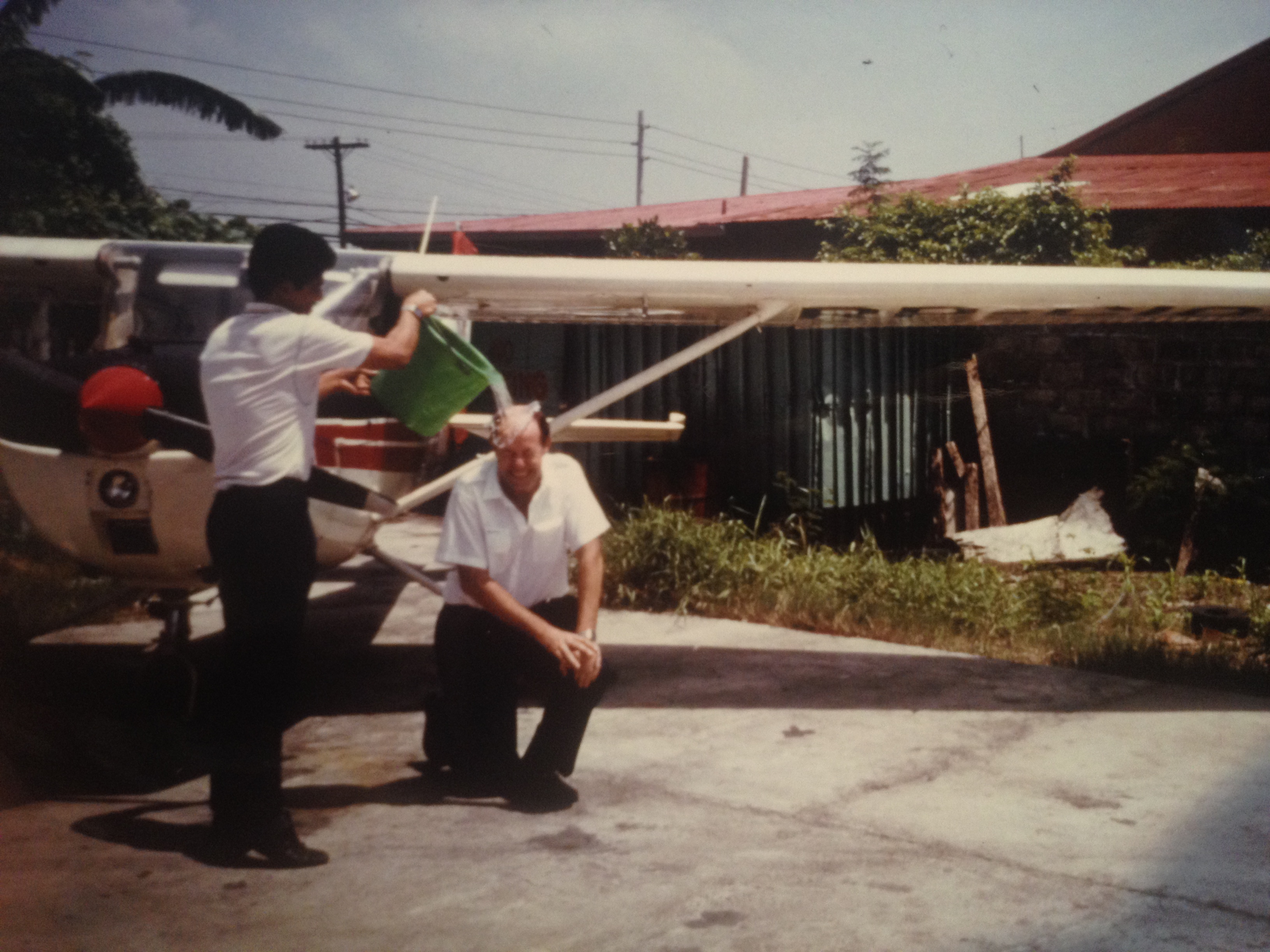 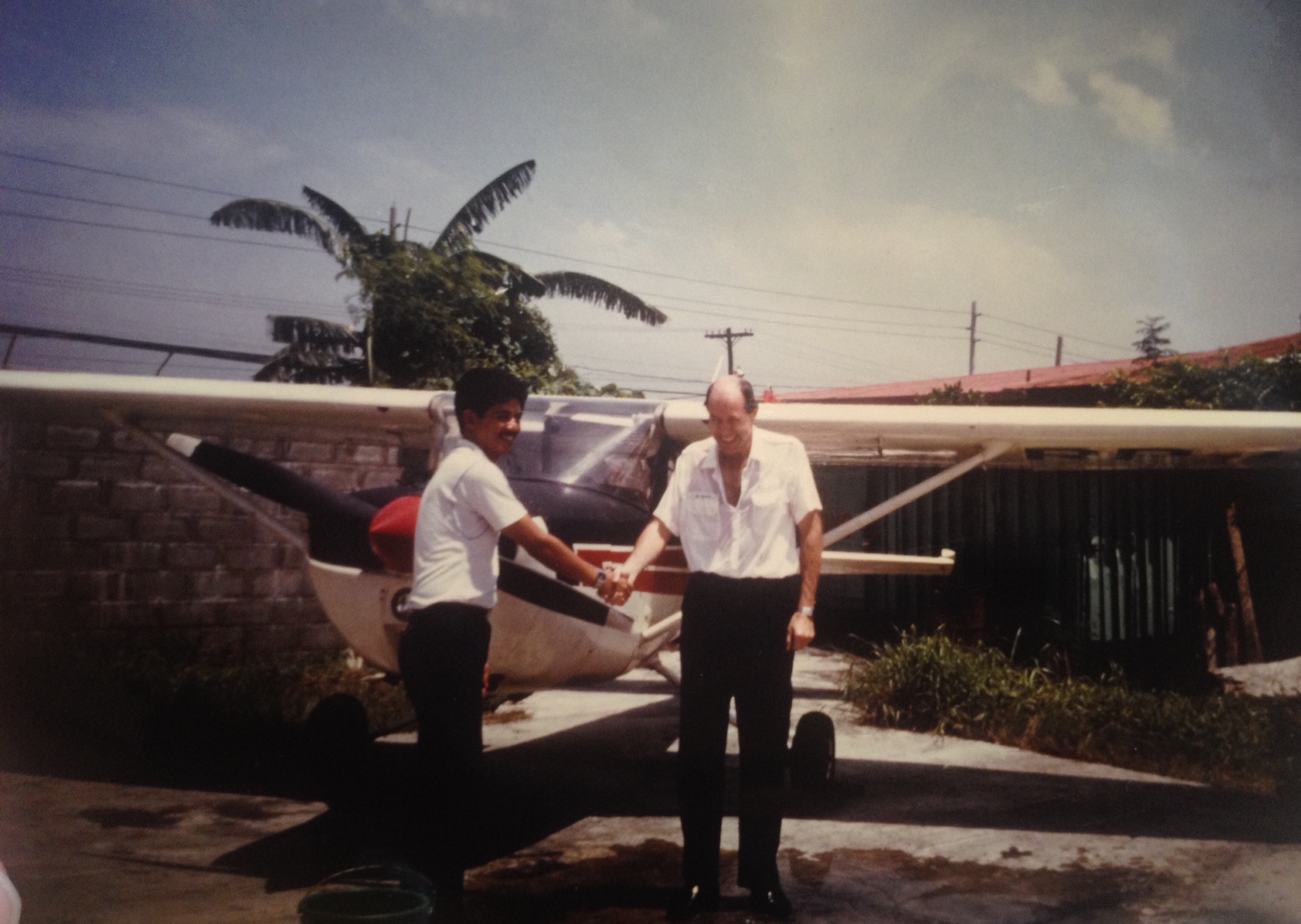 Low altitude also meant a lower cruising speed (maybe half that of a modern jet). This meant that flights were longer and at the time as a child I vividly remember the inflight meal, which at that time was in its infancy. As there were no flight ovens then, we were brought plastic trays with salads – although I think they did have tea and coffee. Another treat available during those long flights was to ask to see the flight deck and I did this many times over the years. It was the highlight of the holiday being ushered forward by the stewardess to meet the captain and copilot who invariably would proudly show us the display of dials and switches in front of them.

My next experiences of fifties flying actually took place in the 70s! I particularly recall one flight as an adult in the seventies flying in a four engined Lockheed Electra from Jakarta and being invited to sit in the copilots seat to have a try. The pilot told me that this aircraft (already rather elderly) had been the personal plane of Elvis Presley before his airline, Merpati as I recall, had brought it back into to commercial service.

Another time I remember flying in a rather battered looking DC3 freighter aeroplane from Manila to Cebu on the early morning fish run. At this time I was living in Manila and was satisfying my life long wish to learn to fly myself and used to spend the weekends at Manila airport flying a Cessna 150. One day with some time on my hands before my lesson I wandered round to look at some of the old aircraft in the neighbouring hangars and got talking to the pilot of an old Dakota supervising the unloading of frozen prawns from his aircraft to be reloaded on a Japan Air flight to Tokyo. He told me that every morning at dawn (weather permitting) he flew the old plane down to Cebu to collect the days haul and invited me to join him in the jump seat. 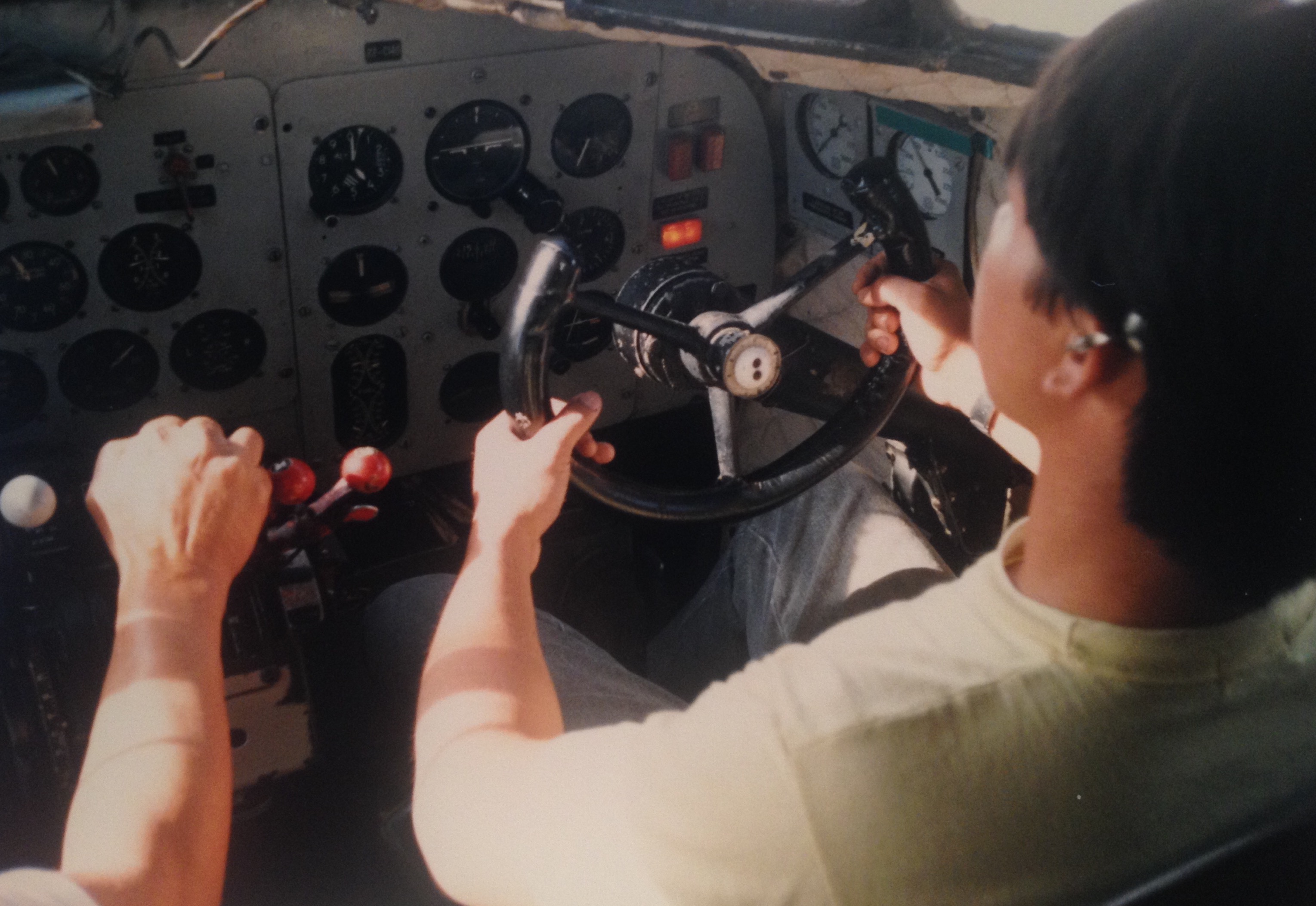 This was a wonderful opportunity not to be missed and sure enough there I was the next morning ready to climb on board. I had not counted on the absolutely awful smell of fish on board but as trundled down the runway I soon forgot this in the excitement sitting in the cockpit behind the the two wizened air crew who I must say almost seemed part of the aircraft.

The two were very friendly and through the headphones and in spite of the enormous vibration of the plane I heard them offer me a chance to fly the plane which was great fun! Back in the jump seat we crossed the Luzon coastline and at some point I became aware that my two deck-mates were looking out of the windows very attentively looking at something down below glistening in the sea.

‘Do you see those objects floating down there?’

‘That’s the fish cargo from another plane doing the fish run, a C46, which crashed in the sea a few days ago. It was the last flying C46 in Manila and they were consistently having problems keeping it in the air.’

For the rest of the flight and the return I must say I was rather more attentive to every extra vibration and jolt in our plane and indeed I found myself wondering whether it had been such a good idea to want to relive fifties flying and whether it was time to return back to the seventies … but that’s another story!

To read more about early flying, check out my post about our visit to Croydon Airport together, the world’s first commercial airport!