I was trying to decide what my favourite part of my trip to Australia was and I realised that it wasn’t one moment, one city or one restaurant (though there were plenty of breathtaking moments, some of the best food I’ve ever eaten and truly beautiful, unique cities). What I like most about Australia is how alive it is. From the moment we arrived in Melbourne, stunned by the raucous sound coming from the bird filled trees that line every street to spotting wallaby heads popping up out of the long grass like Hungry Hippos on Phillip Island to walking among little fairy penguins on rocky shores.

If you love animals and wildlife then you’ll love Australia. Whether you’re spotting a serendipitous furry nose in the wild or happily stroking velvety ears in a park, you’ll be practically hopping with happiness!

Wanderers of the Land:

While you can see and play with plenty of wallabies in the various wildlife centres around Oz, nothing beats seeing them in the wild! If you’re in Melbourne, a good place to go to spot hundreds of wallabies is Phillip Island. We took a wonderful day trip with Wildlife Tours and our guide (Steven G) was wonderful. He told us all about all the various plants and creatures and helped us spot the animals when we couldn’t see them ourselves. In the woods, finding a wallaby can feel a little like Where’s Wally (or Where’s Wallaby) but your eyes soon learn to search for the little round ears and dark noses. 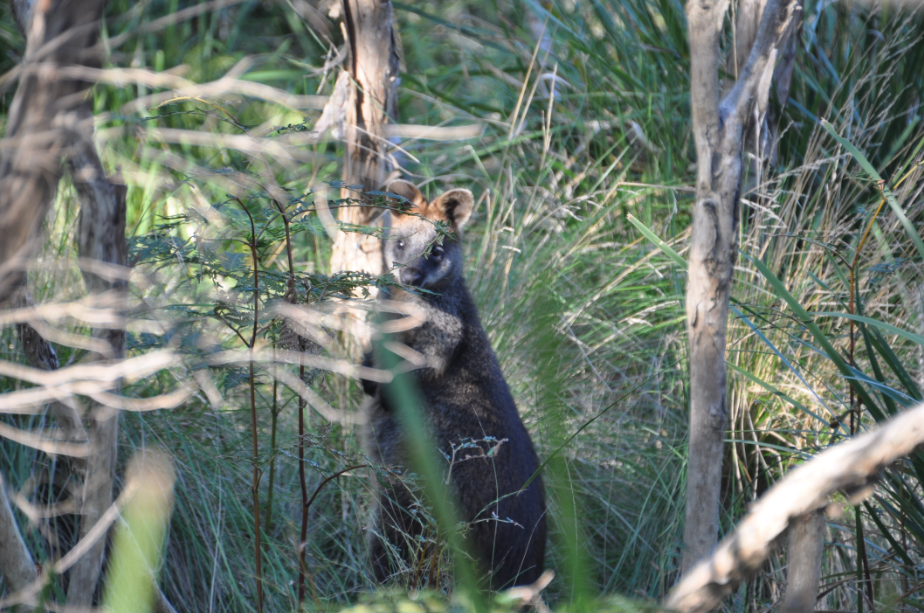 If you’d like to get closer to the wonderful marsupials Australia is famous for (and I strongly recommend doing so), there are plenty of wildlife parks in every state. We went to Maru Park near Melbourne which had some really friendly kangaroos, including one that I totally fell in love with. 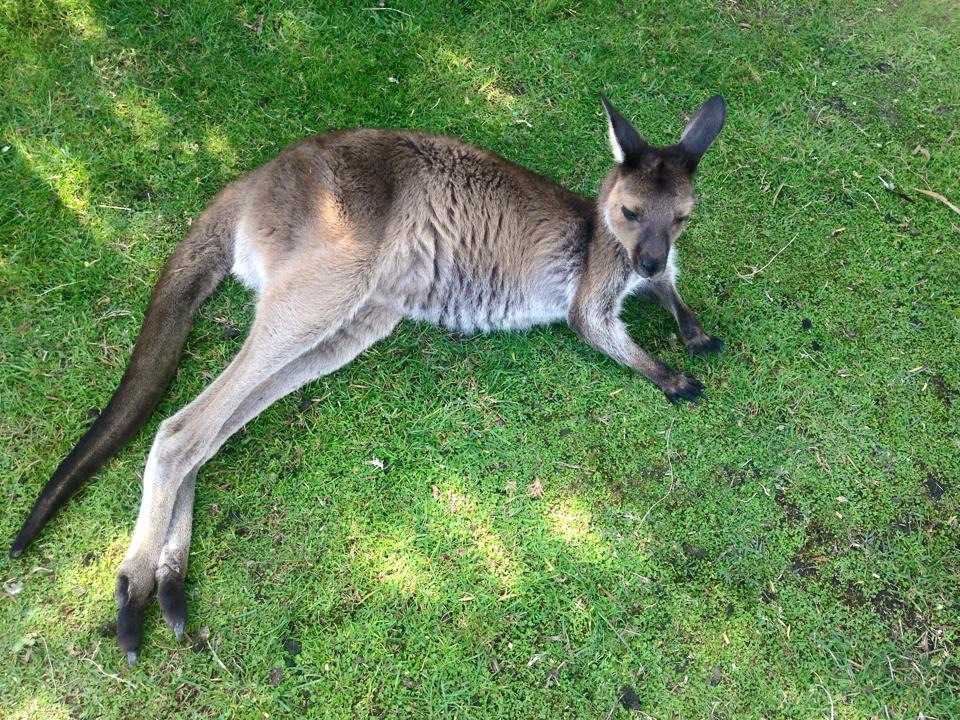 When you enter you can buy a little tub of food (hay and pellets etc) for $2 and the kangaroos will come and eat from your hands. While some of the bigger kangaroos can be quite rough with your hands, my favourite kangaroo (above and below) was so gentle. His little teeth nibbled away at the food while he held my hands in his tiny paws. I wish I could have taken him home! 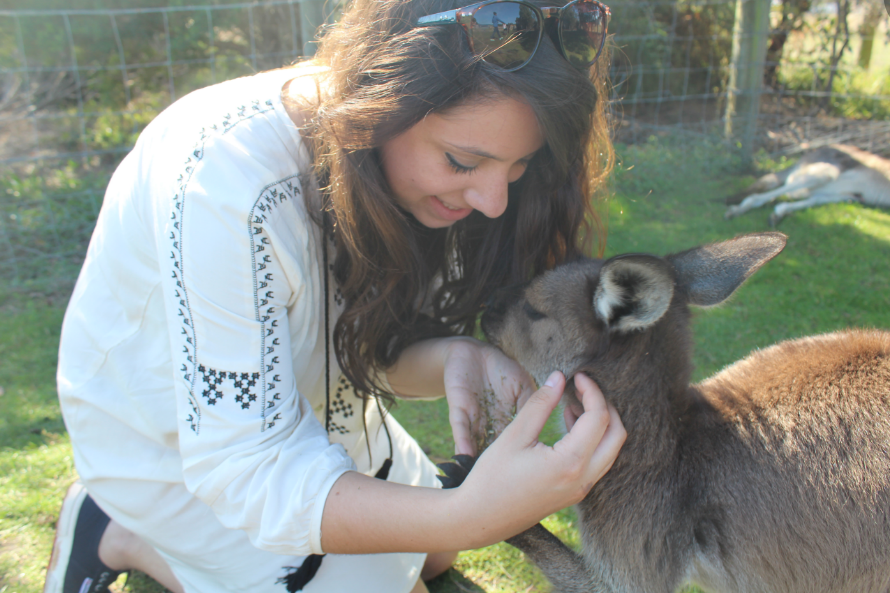 It’s really incredible to see the size of the arm muscles of the male kangaroos, they’re actually bigger than human arms! Watching them hop around is really entrancing too – they move so fast and there’s so much raw power in the movement. The Kangaroos whole body seems to be an elastic spring balanced and ruddered by the thick rope of muscle that is its tail. 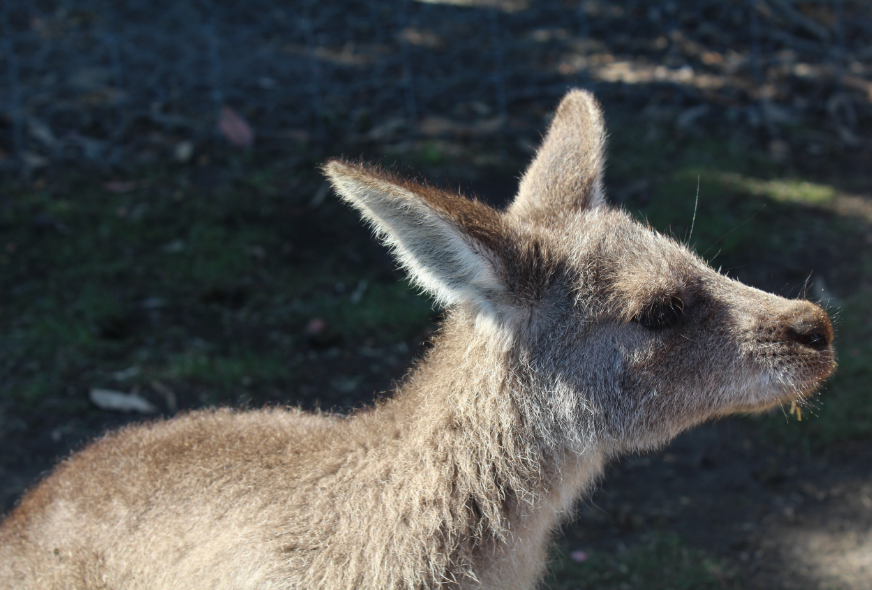 I was rather surprised to encounter a couple of albino kangaroos at the wildlife centre – a mother and child. The kangaroos are really unfazed by the visitors, some want to play and be stroked and eat and others are quite content dozing away. The albino mother had a wonderful pose, she reminded me of a beautiful reclining lady waiting to be painted in the nude. 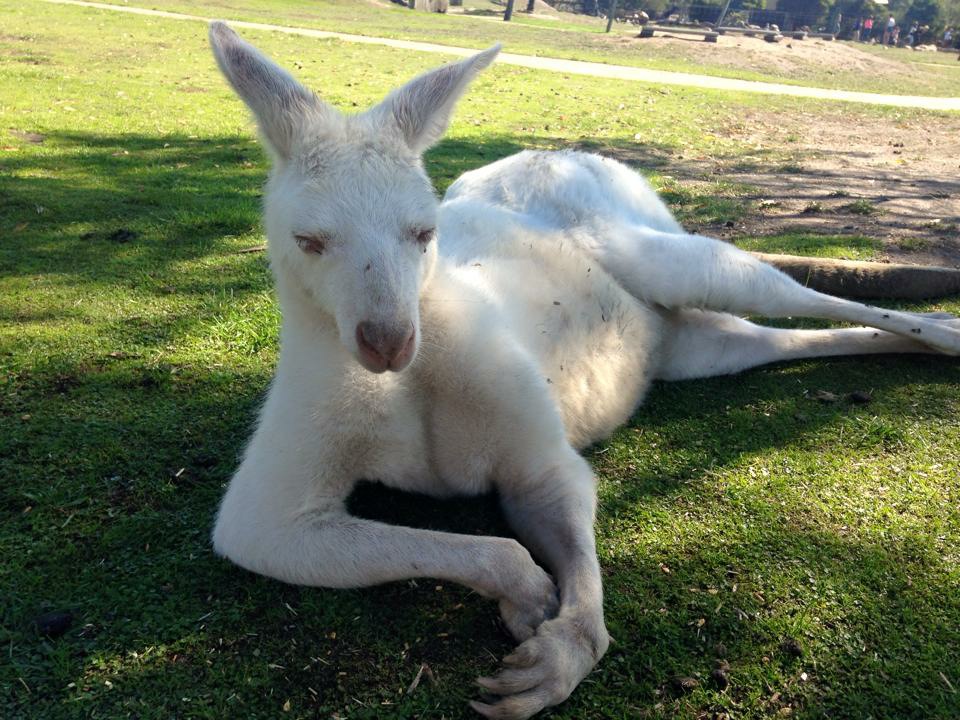 Though many tourists long for their photo cuddling one of these tufty eared, spoon nosed tree huggers, it’s actually illegal in New South Wales (Sydney) and Victoria (Melbourne) to guests to hold the koalas. The reason for this is that the koalas apparently suffer a lot of stress being passed around from person to person. Most of the wildlife centres will pick their koalas up off the trees and bring them to a post where visitors can take photos next to the koala instead. 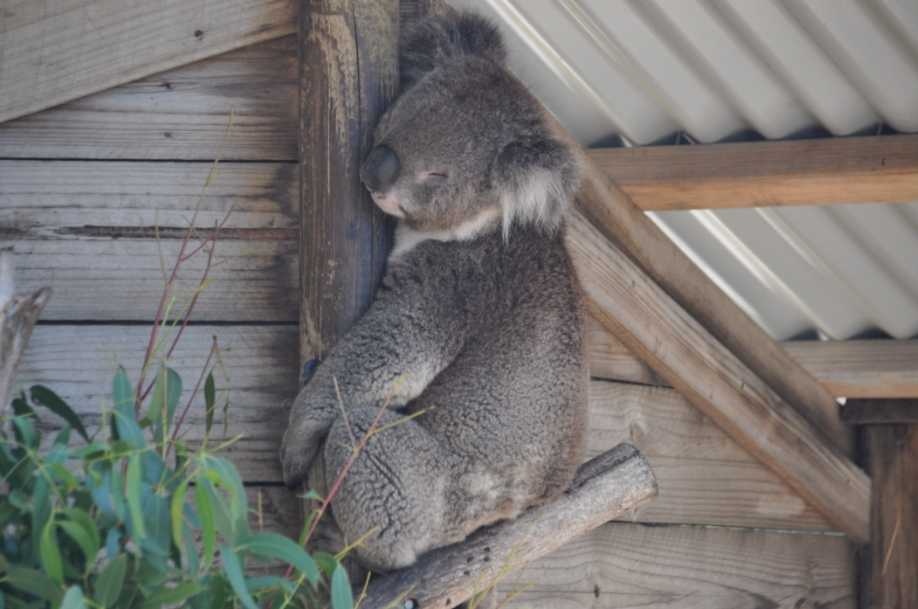 I don’t know much about koalas but they really did not seem to want to get down from their trees! The keeper had to cover its eyes and then pry its arms from the branches so it didn’t know where to grab back on to. It was a painful procedure that makes me think that these creatures might just be best viewed from afar, happily sleeping on their Eucalyptus branches.

Koalas have a reputation for being grumpy and rather lazy. They live off Eucalyptus leaves which are incredibly difficult to digest and as such require many hours of sleep in order for the koalas to have the energy to digest the food. Koalas are very prominent in the Dreamtime stories of the Aboriginal people of Australia. One of the myths tells of how a kangaroo punished the koala for being greedy and lazy by cutting off its tail! However many of the tribes considered the koala to be a wise creature and sought advice from it. 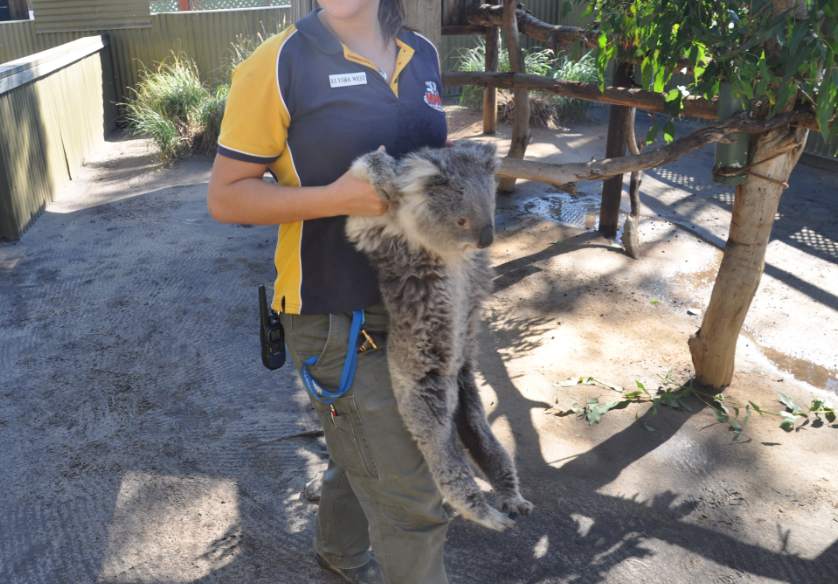 Little is known about the origin of the dingo, when it evolved from the grey wolf, how and when it came to Australia. It looks so similar to the Akita dog, it’s hard to remember that these creatures are not tame. The dingoes are also considered special to the Aboriginal people, it is said that the dogs can see the supernatural and thus guard and warn against any evil powers. However the dingo is more often seen as a pest by the immigrant Australians, a pest that would agitate and eat their sheep! In the 1880’s a 2,500 km fence was built to prevent dingoes from entering the green and fertile grazing lands of South East Australia. Though the fences have been maintained to this day, they are increasingly knocked down by feral camels. 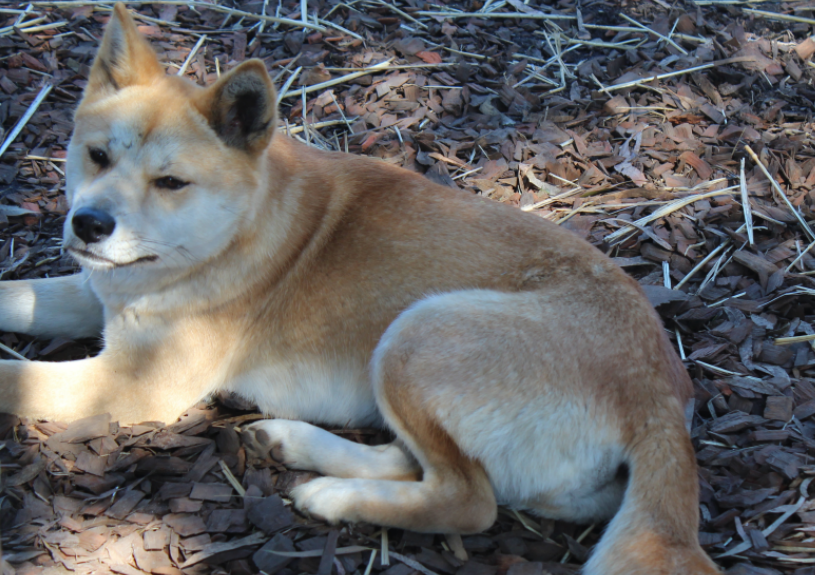 Up in the Trees:

One of the things I loved best about Australia was the neverending birdsong in the trees, as if an insane conductor was leading a symphony of feathered instruments in a jarring and sometimes raucous performance. There’s a reason that a group of parrots is referred to as a pandemonium – they’re the hooligans of the bird world, flying through in a cacophony of squawks, leaving a mess of destruction behind them.

I loved these colourful little lorikeets. There were a few bird feeders outside our cabin in Queensland and every morning these little guys would hand out and provide us with our morning entertainment as we watched them play. 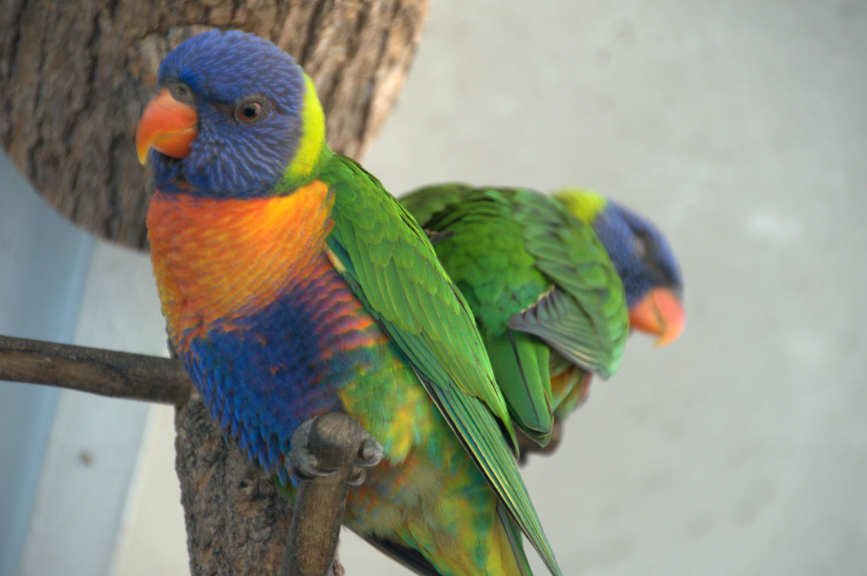 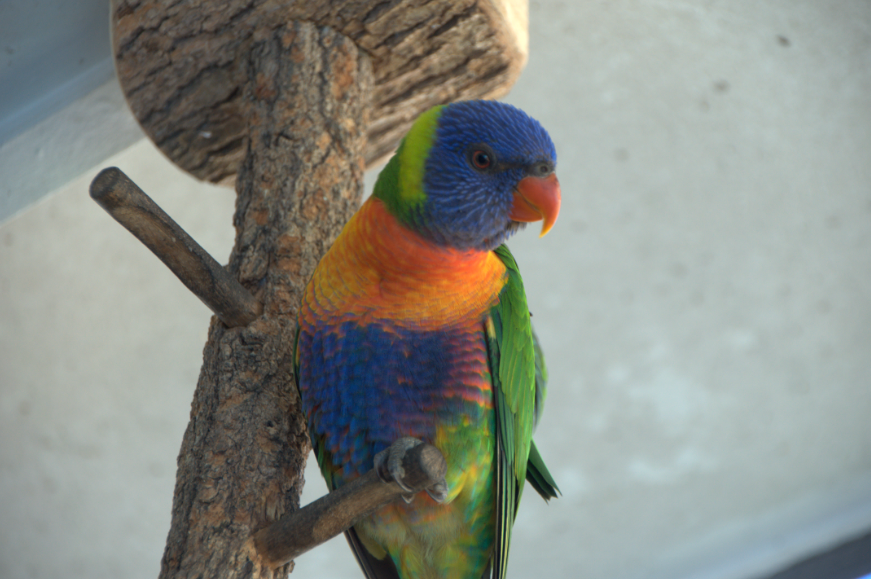 Despite their noisiness, I absolutely loved the cockatoos. I couldn’t help be reminded of Kiki from the Enid Blyton adventure series – Jack’s pretty but very naughty bird! When we were lying on the beach one afternoon about 7 huge dark birds flew over. At first we thought they were birds of prey but as they flew lower and landed on the palm trees we realised they were red tailed black cockatoos! We unfortunately didn’t get any photos but they were my bird highlight of the trip! 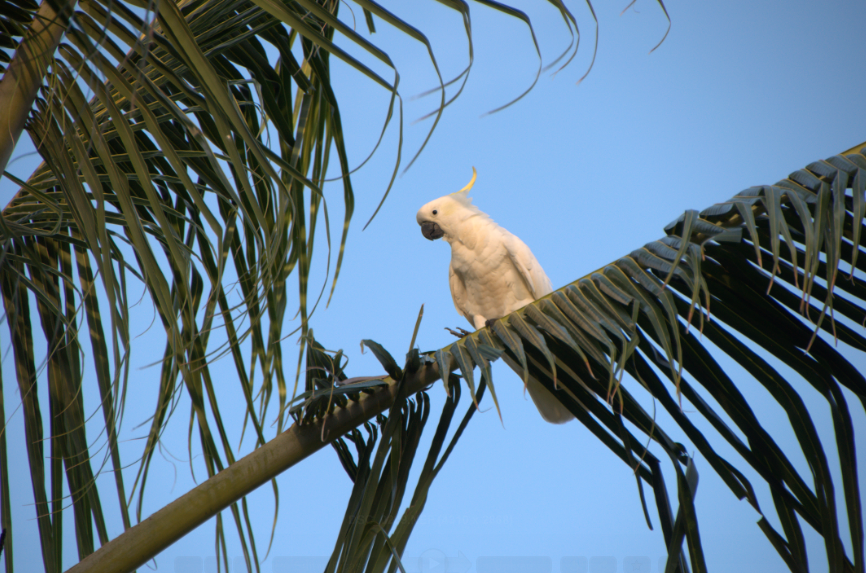 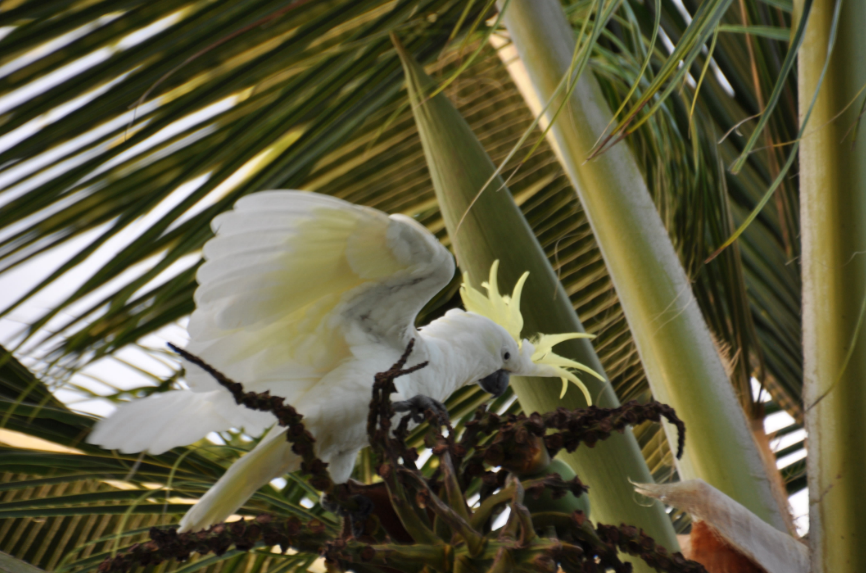 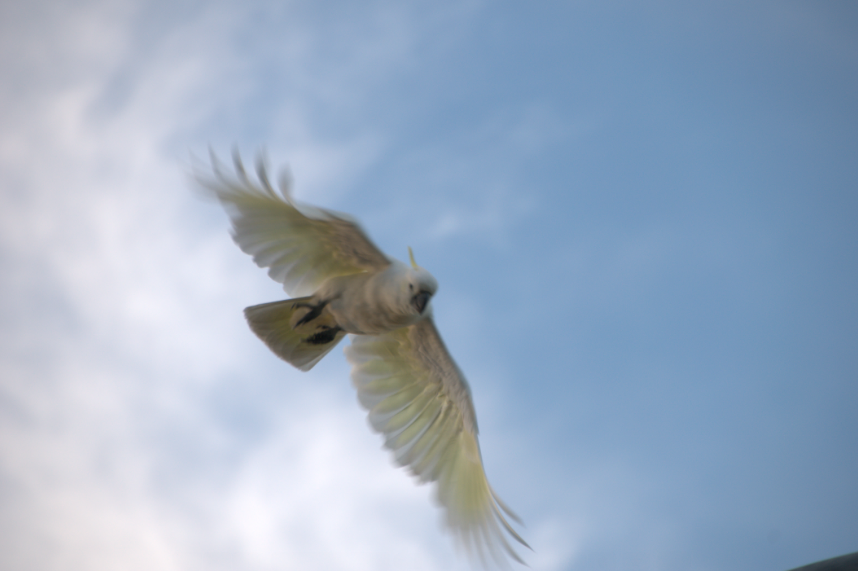 There were so many weird and wonderful birds in Australia. I loved seeing the Cape Barren geese on Phillip Island – their dusty grey plump bodies and snub mint green beaks were most unusual!

Kookaburra
This was the bird I was most excited about seeing before I arrived in Australia. They are pretty adorable with they fluffy bodies and scooped beaks! You can get up close and personal with these birds in the wildlife centres but personally I hate seeing birds in cages, no matter how big they are. We took the Puffing Billy train through the Dandenongs (near Melbourne) -a really beautiful area and saw plenty of kookaburras free in the trees. I would definitely recommend visiting the Dandenongs for a wander around in the wild! 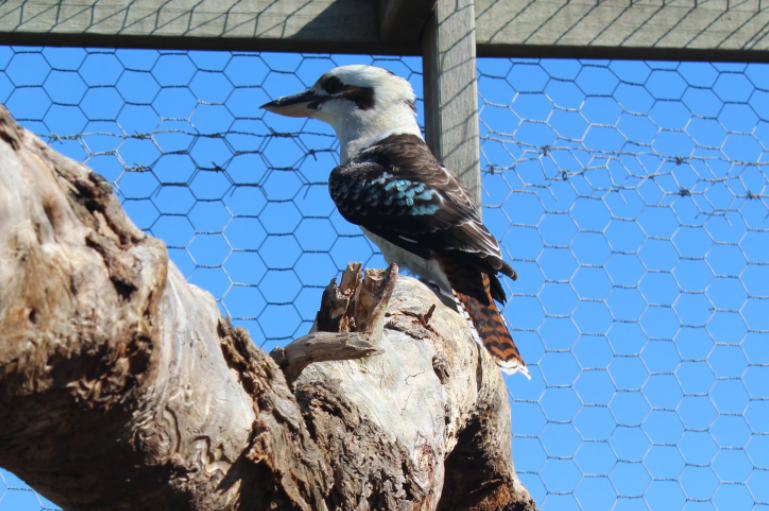 One of the the most amazing creatures I saw while Down Under was definitely the Little Penguins, formerly known as Fairy Penguins (which I obviously prefer as a name!) These are the smallest penguins in the world and have beautiful silver chests and blue grey backs and the tiniest flippers you’ve ever seen! You can see them in quite a few place in the South of Australia including the pier at St. Kilda in Melbourne, however we went a little further to Phillip Island in order to see hundreds of these comical birds.

Phillip Island is home to 70,000 of these little birds, who swim out to sea during the day and run up the beach at sunset, back to their burrows. The government has tried to help the birds by building little wooden penguin houses all over the island and the penguins have taken to them. So if you’re walking around the island, and come upon a tiny wooden box, make sure to peek inside! We visited during moulting season so there were quite a few penguins on the land during the day. If you’re walking down to the Nobbies you can often see little penguin feet under the boardwalk! 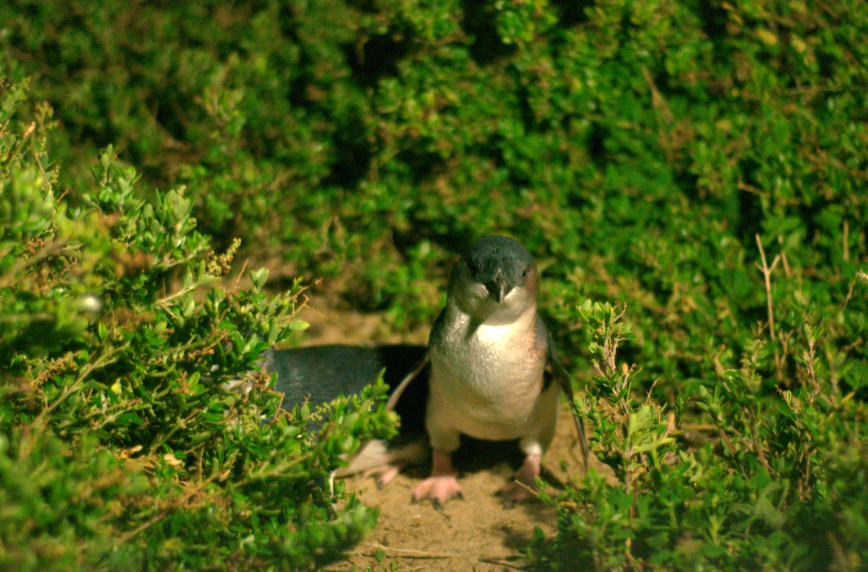 You can go to watch the penguins run out of the water at sunset on Phillip Island. It’s a pretty impressive sight! Make sure to sit closer to the gap between the stands though, and walk up after you’ve seen your first batch as the penguins like to hang around outside their burrows/wooden houses and socialise. We spent a few happy hours wandering around watching the little penguins chat, stare into space and we even were treated to a little display by one amorous couple!

Swimming at the Great Barrier Reef is one of the most beautiful things you can do on this planet. It’s like wandering through an underwater garden with explosions of colour painted on the myriad of corals that wave to and fro with the waves. Tiny little clownfish dart in and out of anemones, schools of yellow striped fish swarm around you, tickling your feet and if you’re lucky, you’ll see a turtle dozing on the corals, looking pretty high on their jellyfish venom! Langford Island is the best place to see Green and Hornbill turtles, but I also loved seeing the Maori Wrasse fish (a massive fish with a beautifully decorated head). Head over to Whitehaven Beach to see reef sharks and small sting rays. There’s a whole world of beautiful creatures in the Australian sea! We took a day trip on the Derwent Hunter – a beautiful old wooden sailing boat which takes you to some of the nicer snorkelling spot – I would highly recommend paying a little extra for this truly special experience! 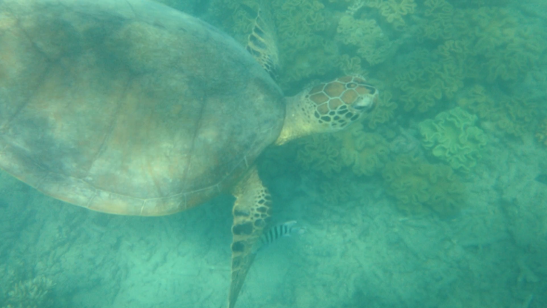 I hope you liked this little taste of the animals I fell in love with in Australia. There are so many more to see though which I didn’t photograph, from the possums that hang on the telephone lines to the shy Echidnas, friendly Quokkas and unexpected camels. If you love animals and love seeing them in the wild, Australia should definitely be at the top of your list of places to visit!

Photos by myself and L Yoong.