Growing up, my memories of Northumberland were inextricably tied to my grandparents’ small detached house on Polwarth Drive in Gosforth. Lladró figurines, William Morris wallpaper and a confusion of Arabic and Oriental wares, brought back by my father from his many travels, cluttered the house. A subtle scent of floral perfume lingered on and there was an ever present shadow of war.

One day we scooped my grandfather up and took him on an adventure back in time. Along the way I came face to face with the true beauty of Northumberland and fell very much in love with it. 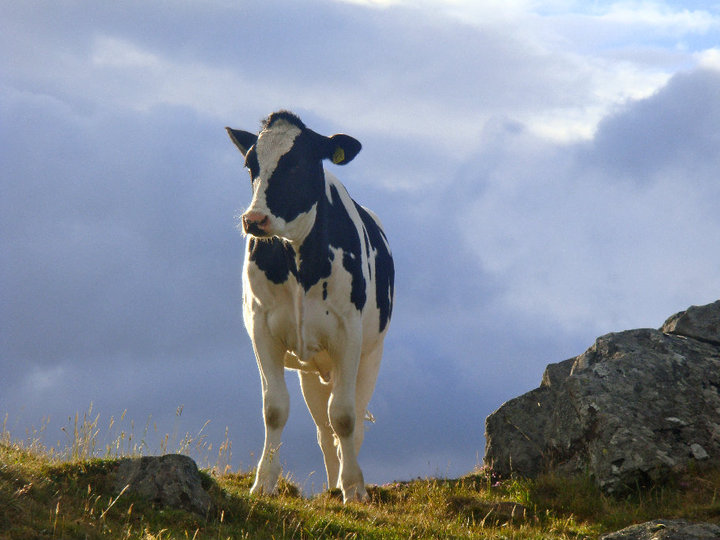 Lindisfarne (Holy Island)
There is something inherently magical about visiting a place that is only sometimes accessible, especially when the danger of the tides looms about you. However fear not, tide tables are displayed clearly at either side of the causeway, which was once an ancient pilgrim path. The Irish monk St. Aidan founded the first monastery in Lindisfarne and since then the island has been home to many monks and bishops, including Northumberland’s patron saint, Saint Cuthbert. If they were seeking peace, tranquility and isolation, then they got it, along with a heavy dose of incredible natural beauty.

Walk along the craggy rocks on the shore and among the vividly painted flowers that grow wild or step into Gertrude Jekyll’s little walled garden. Make sure to visit the ruined monastery and Lindisfarne Castle. The castle is run by the National Trust and is beautifully situated atop a small mound that seems to almost wrap around the walls of the castle. It was resdesigned by Edwin Lutyens in the Arts & Crafts style in the early 1900’s. My favourite part of the visit though was finding the little sheds made from upturned fishing boats – very innovative indeed! 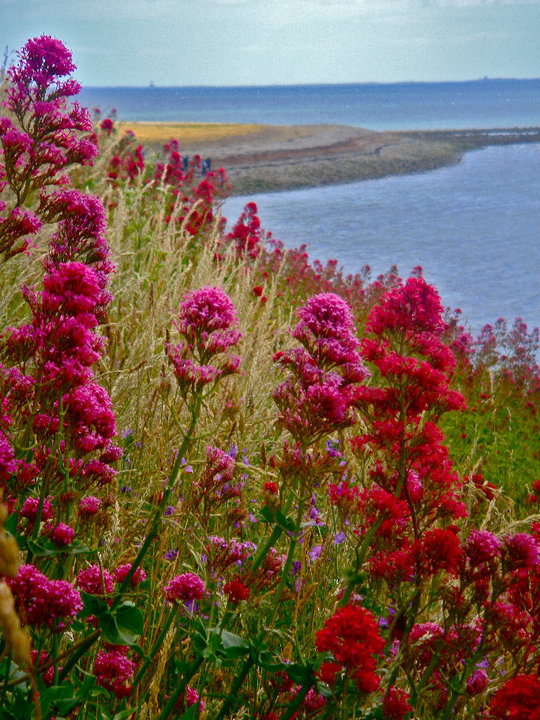 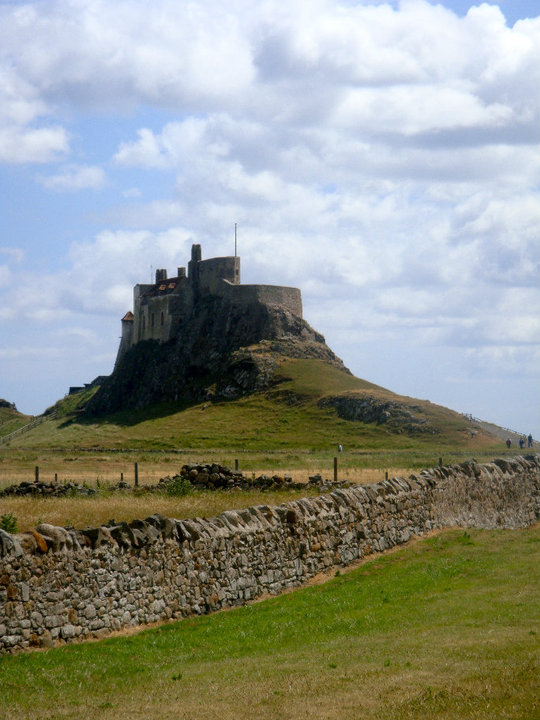 Before you leave the island, buy a couple of bottles of Lindisfarne Mead, a honey and grape blend of mead that was once a favourite of the monks. If you don’t like mead, like me, it still makes a wonderful gift!

Our next stop was a tiny little village called Seahouses where we made time for a 99p ice cream then hopped straight onto a boat headed out to the Farne Islands. If any of you have read Enid Blyton’s The Sea of Adventure, you’ll feel like the words have flown off the pages and materialised around you. 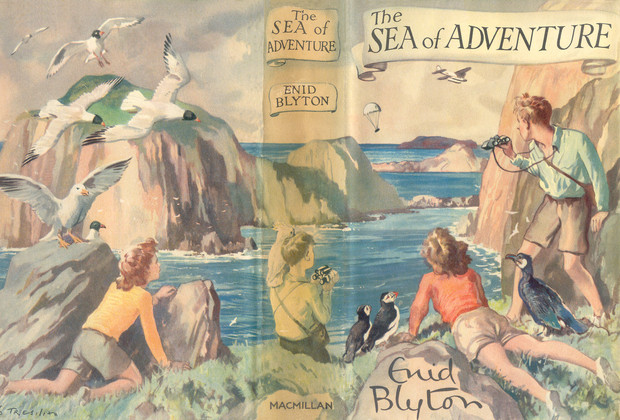 “There was a chorus of different cries, some shrill, some guttural, some mournful and forlorn. They gave the children a wild, exultant kind of feeling.”

When we stepped off the little fishing boat and onto the island, we too were completely taken by that wild, exultant kind of feeling. Birds of every shape and size (although no cockatoos, sorry Kiki!) surrounded us. You have to be careful where you step as nests line the footpath, some coddling precious eggs, others home to very loud and hungry chicks, their mouth most decidedly open! 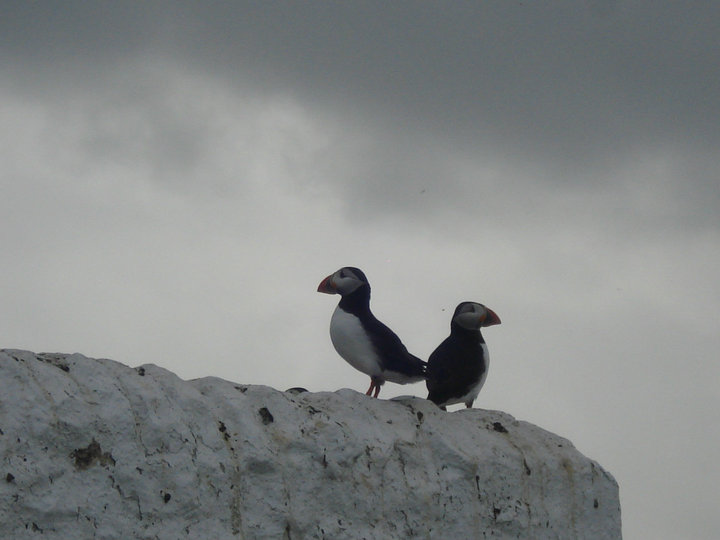 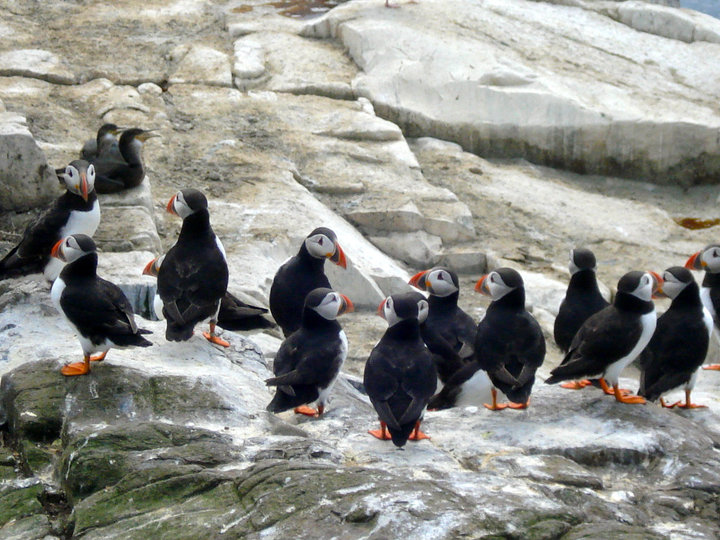 The iridescent green & black Cormorants were the most beautiful; the snowy Arctic Terns the most aggressive (I recommend wearing a hat if you plan on walking anywhere near their fluffy grey chicks!) I was tickled by the  curious names given to the birds such as Kittiwakes, Shags, Plovers, Guillemots, Razorbills, Wagtails and Pipits! However my favourites were definitely the puffins.

They have a strangely comical yet sad expression that you can’t help but fall in love with. I learnt was that puffins live in burrows in the ground that are shared by rabbits too – who would have thought? 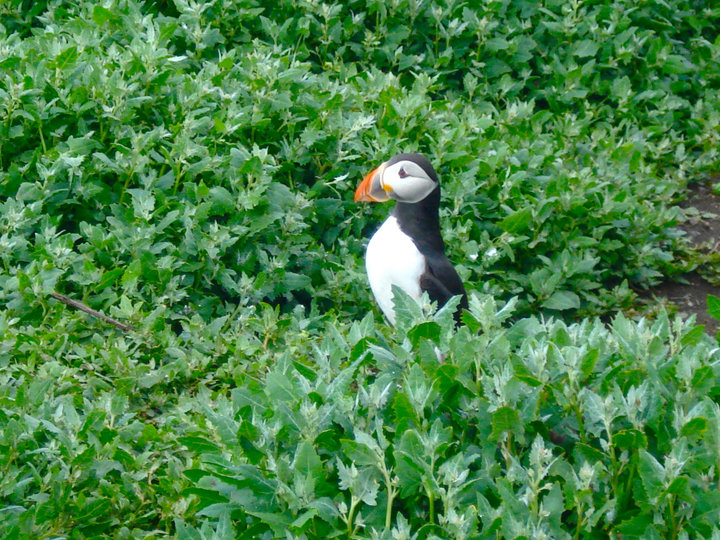 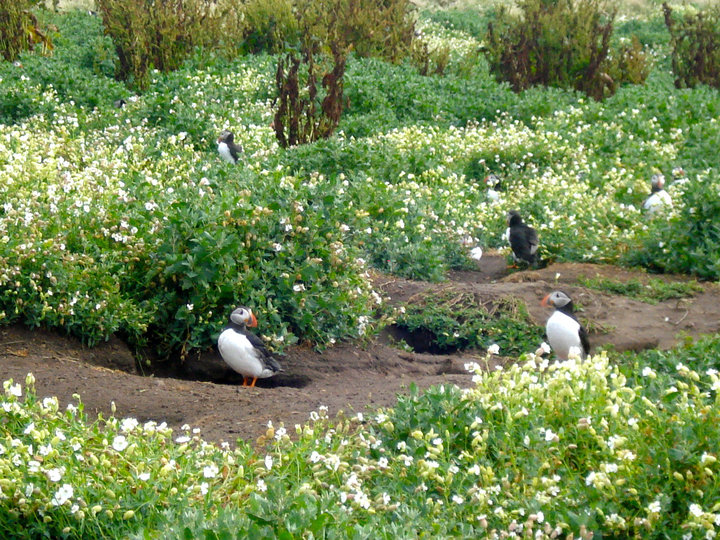 You can spend as much time as you want wandering around the island which is great because the birds are truly mesmerising, then head over to the visitor centre or walk around the lighthouse. If you sit by the water’s edge you might even be lucky enough to make some new friends – the playful seals bob their heads up and swim along side the boats. You can follow the head ranger David Steel on Twitter for some incredible photos of the young seal pups.

The Farne Islands are run by the National Trust and admission ranges from £5.75 to £6.80 (depending on the season) – both incredibly cheap considering the unique experience the island grants you. You can only visit between April and July so make sure to time your trip ‘up North’ accordingly! 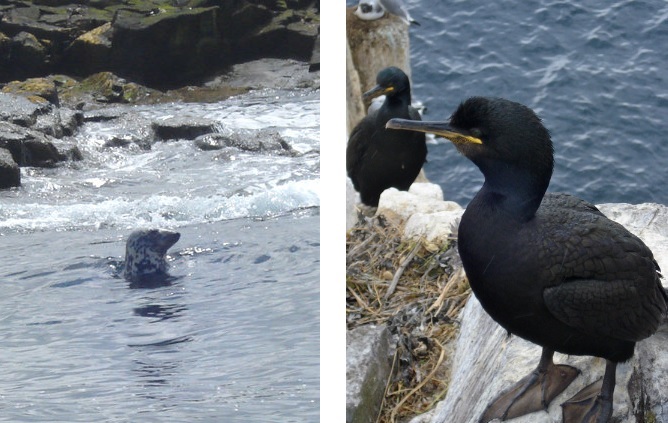 This land was tugged back and forth between the Anglo Saxons and the native Britons, the Din Guarie, both of whom used it as the seat of their kingdoms. The castle was bought by  William Armstrong, a Victorian industrialist who invented the hydraulic accumulator (fun little fact for the engineering fans!), and is still owned by his family. It’s a beautifully unspoiled castle with a romantic setting on the beach, protected by the tough dune grass – well worth a visit! 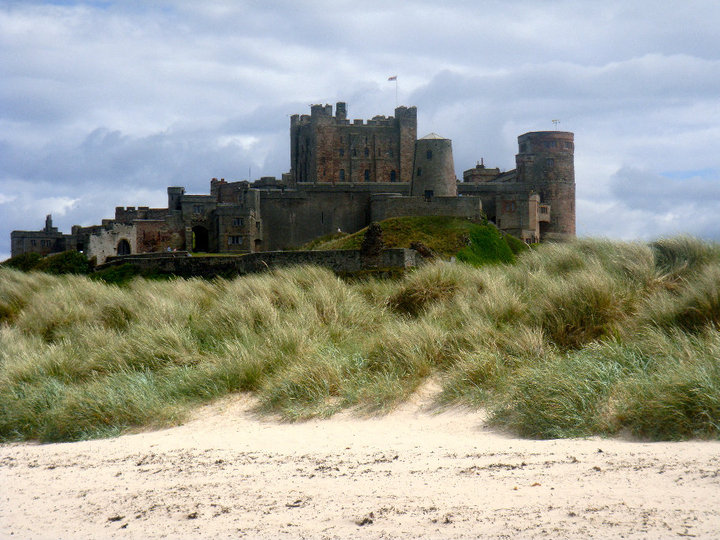 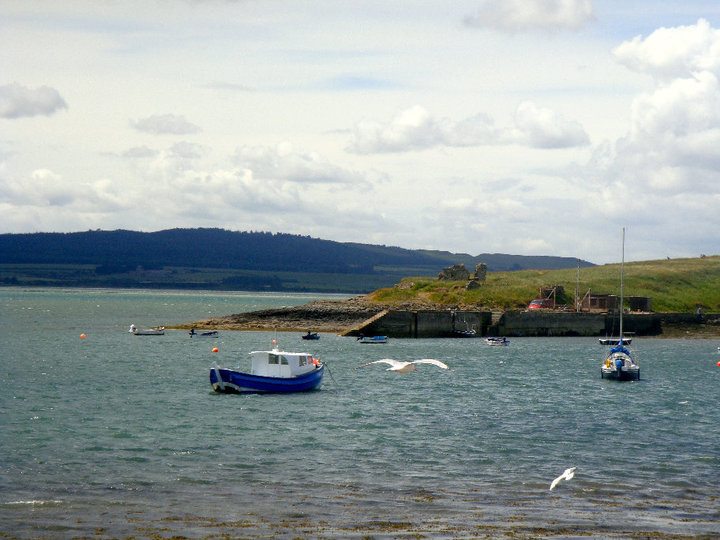 While we were travelling around Northumberland, we stayed in an idyllic little fishing village called Craster, perhaps most famous for its kippers (smoked herring)! I’m going to be honest, I’ve never actually tried a kipper, I’ve always been somewhat put off by this English custom of eating them for breakfast and their very strong scent. In retrospect I regret not being brave enough to try one, as Craster kippers are considered the best in the country. 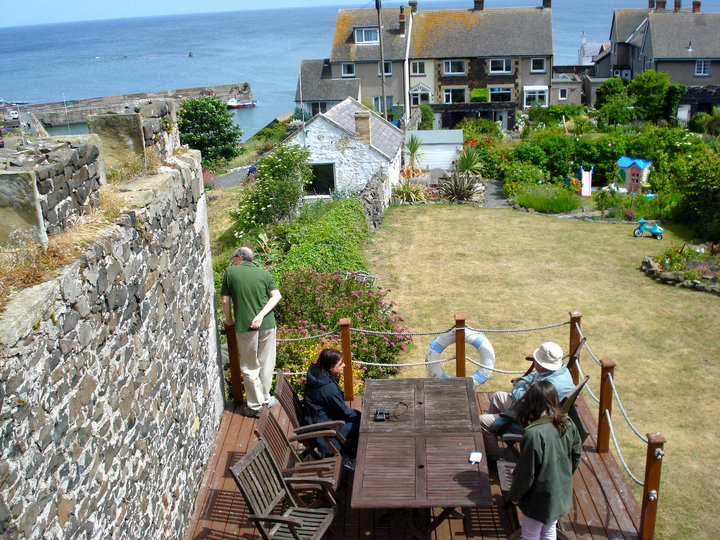 We hired a little cottage right next to the only remaining working smokehouse, belonging to L Robson & Sons. These smokehouses are over 100 years old and blackened inside from years and years of herrings being cured over smouldering oak chips. The chimney issues a continuous plume of swirling white smoke and seems, in a way, to be the heart of the village. Across the road from the smokehouse is a very pleasant pub that is right on the edge of the coast, and around the corner is the little harbour, lined with flowers. 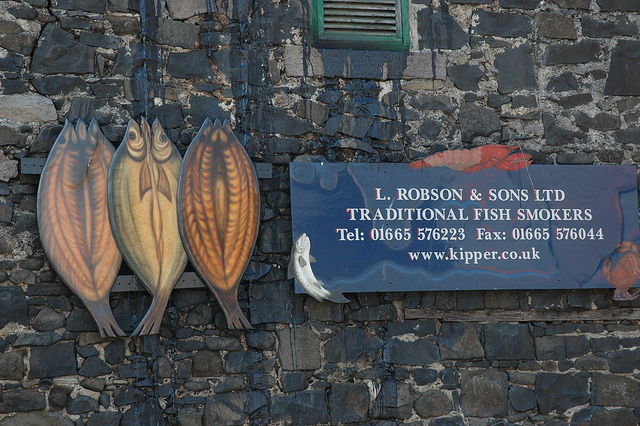 Craster is a sleepy little village, the fishing trade has moved on and most of the cottages are used only as summer homes; however if you’re looking to escape, I can think of no better place to go!

We indulged in many long walks along the beach and over the slippery dune grass. We visited Embleton – a point of interest for those who love golf as it has a very large and natural looking golf course nearby that hugs the coastline. For the first time I realised how the sport originated as the undulating dunes form a perfect course! This small stretch of coast had a stronger claim for us than just the golf course though. My father’s family once owned a little bungalow on the sea front which he visited every summer and happily named ‘Tranquility Base’. It fit the name superbly, being quiet and peaceful, but with a natural beauty that felt out of this world. 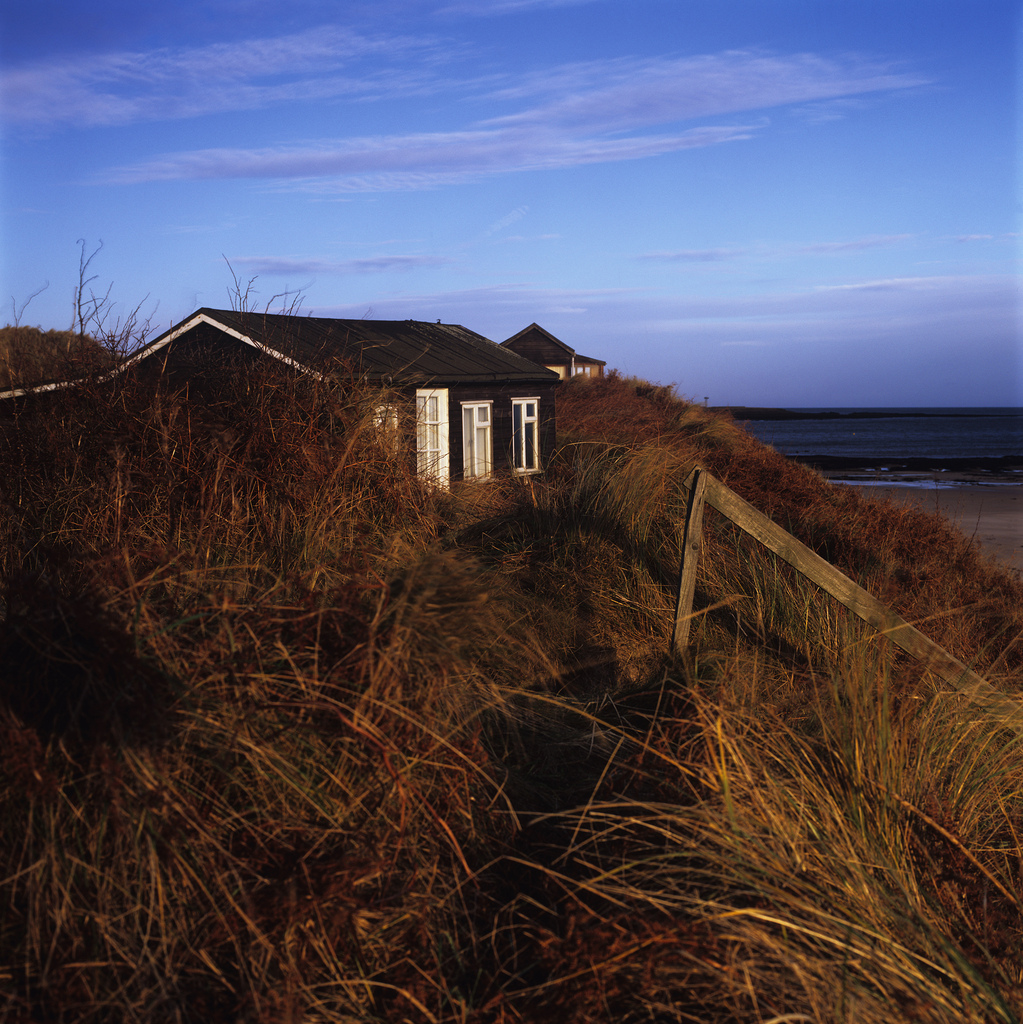 From there you can walk on to Dunstanburgh Castle – a romantic ruin, described in the 1500’s as being in ‘wonderfull great decaye‘ and the faithful muse of Joseph Mallord William Turner.

What must once have been an impressive feat of masonry and a richly comfortable home now withers away on the craggy coastline. The weathered crumbling walls now only welcome grazing sheep and the occasional rambler or tourist. 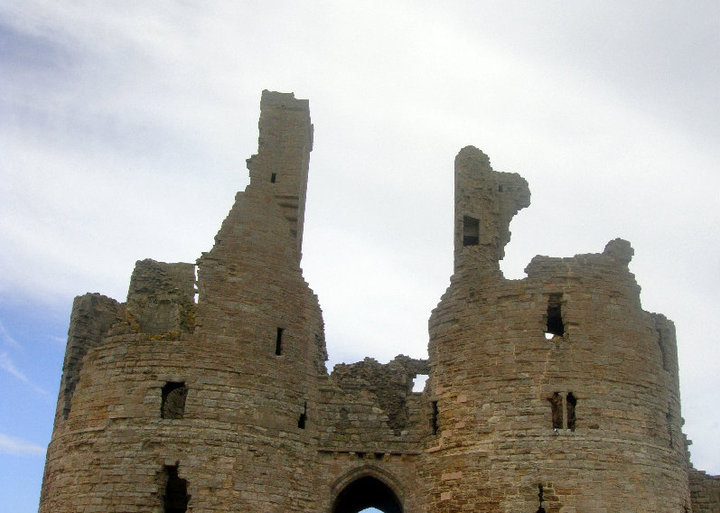 Also in the surrounding area is a charming little village called Newton by the Sea. We stopped off at the Ship Inn on a lovely sunny day for lunch and sat outside in the village green which is enclosed on 3 sides by a horseshoe of houses looking out to sea. The pub was buzzing, everybody and his dog (and/or mother) had come out! Sunshine really does change Britain – everything shifts from dark and grey to a dazzling silver.

From Northumberland we travelled further North into Scotland. Although a large chunk of Scotland used to be part of the Kingdom of Northumbria, in the interest of keeping the peace, I shall leave that for a separate blog post. 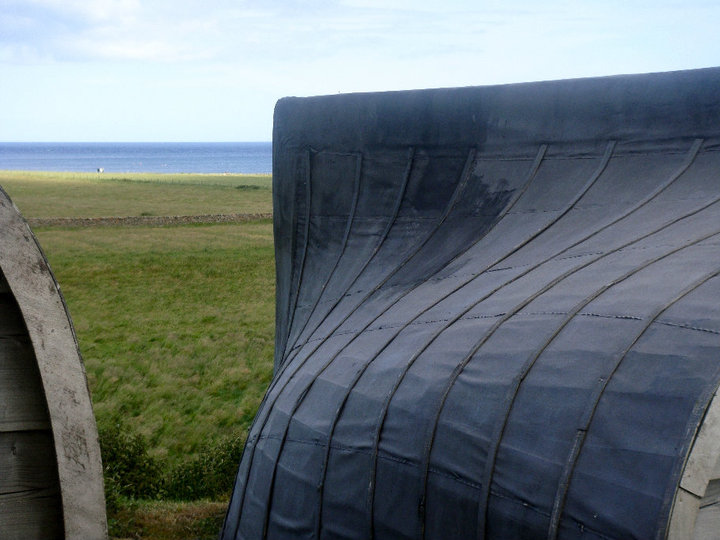