The Feria de Pâques – Easter in Arles – felt like I’d somehow ended up in Spain instead of France by mistake! A programme of events all based around bulls and bull fighting, flamenco cries and wails filling the streets by day and Spanish pop music and reggaeton getting people swaying at night. Every cafe and restaurant and street stall had a paellera on the go making paella all day long, the scent of grilled prawns sweetening the air under the red and yellow of the Spanish flag. The famous Rumba Flamenco band The Gipsy Kings hail from Arles, their Spanish parents having fled Catalonia during the Spanish Civil War, and their Spanish language music is adored here. Especially during the festivals, it seems that Spanish culture takes the lead in this little French town.

Apart from the fact that everyone was speaking French, the main difference though was the complete absence of any religious overtones during the whole weekend. France has had state and church separate for so long, unlike Spain, that Easter is more of a party than a Holy Week. The great plus side to that is that everything is open for the 4 days – museums, restaurants, bakeries, public sights and even the buses run! This makes it a perfect time to visit Arles.

While bullfighting is considered a controversial topic and many think the practice only endures due to tourism artificially propping it up, it’s actually a very old tradition in France, just like in Spain, and one which is still fiercely defended by the younger generation. Though bull fighting was declared illegal in 2011 in France, it was also declared a Cultural Heritage by officials, protecting it under UNESO’s Heritage Convention, thus allowing areas with strong cultural ties, such as Arles, to continue the tradition. For those squeamish of blood, there are a number of non-violent types of bullfighting on display during the Feria de Pâques, the Easter Festival in Arles. 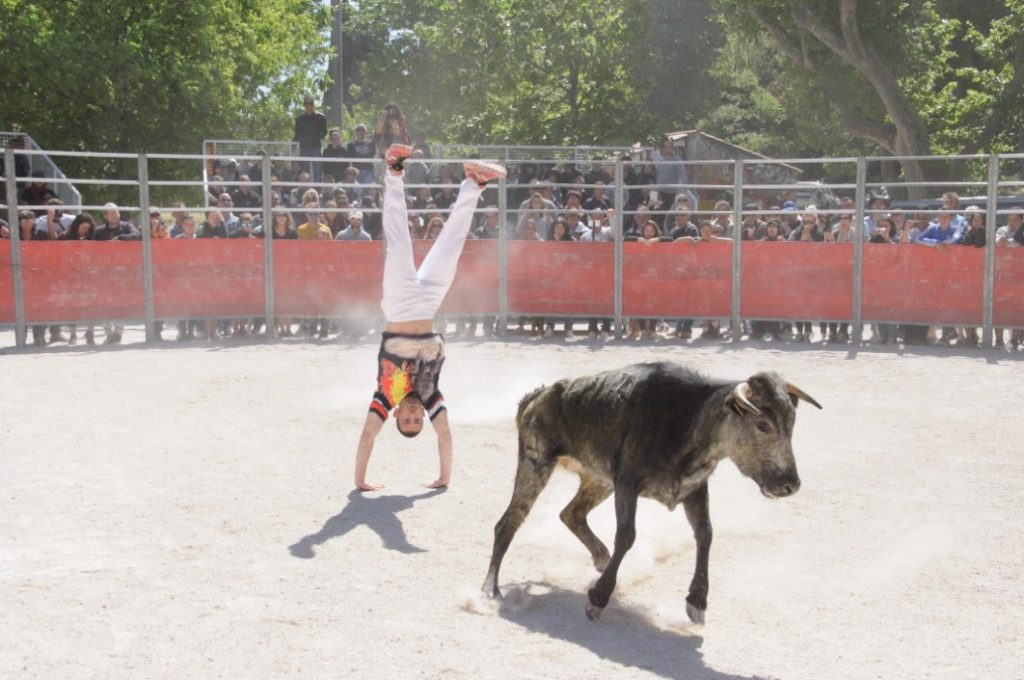 A very traditional type of bull-fighting in both Spain and France, the recortadores are really bull-leapers or bull-acrobats and this show is nothing short of truly spectacular. Despite the misleading name (which dates back to a Bull worshipping ritual in Ancient Minoan Crete), it is mainly cows that are used, not bulls. The recortadores stand still as the angry cow charges towards them, only moving at the very last possible moment to evade it. This could either be with a twist of the hips and an arched back to dodge the horns by mere inches, or by a leap. Standing, pressed up against the rails of the arena at Place de la Croisière, covered from head to toe in dust from the cows stamping hooves and watching the men execute perfect somersaults over them was such an adrenalin rush. There were some hairy moments too, with a couple of the men moving out of the way a little too slowly. Luckily there were no serious injuries that day, just some sore backsides! 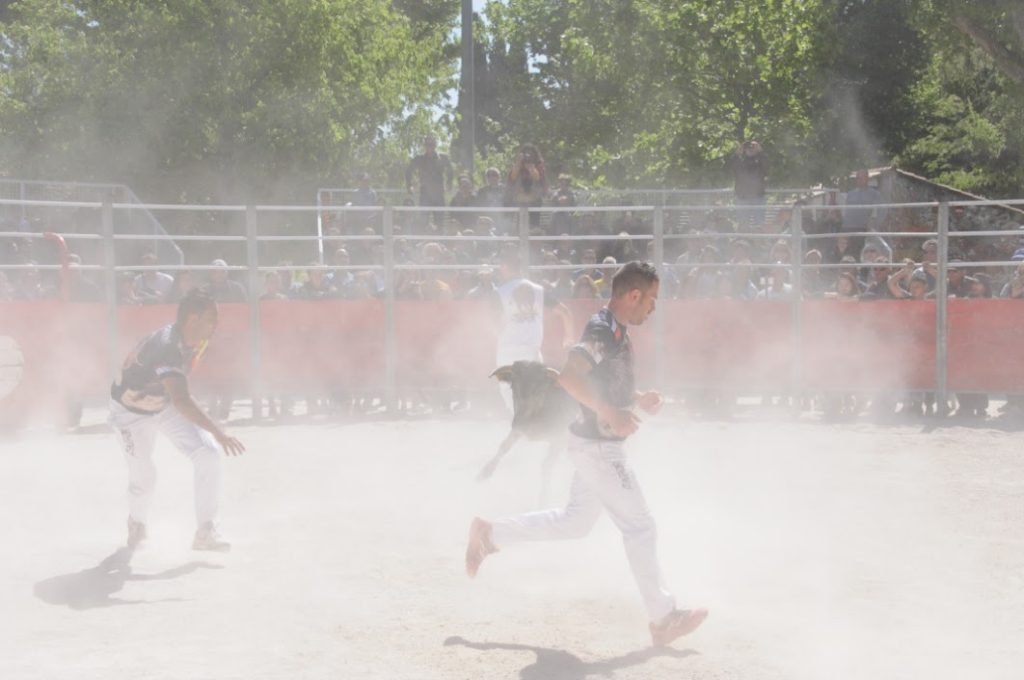 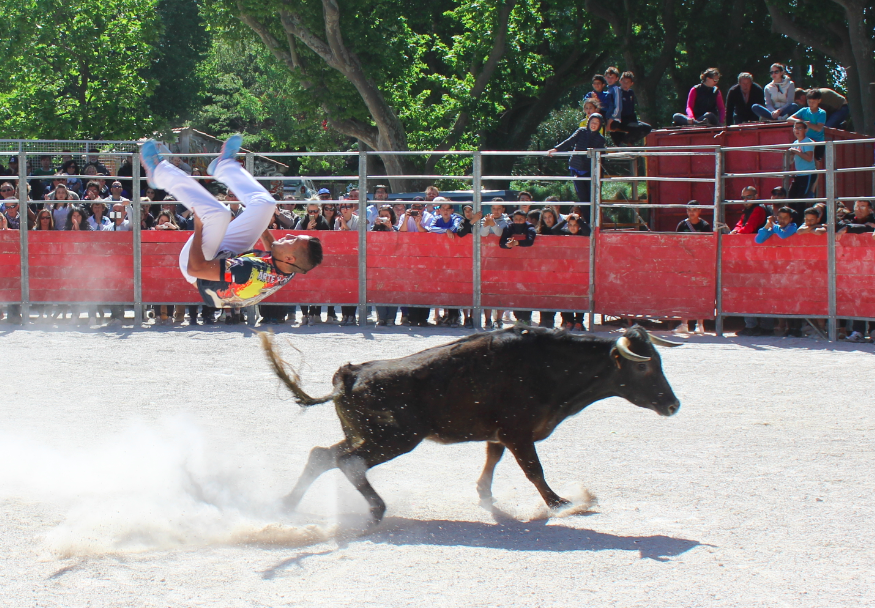 This type of bull-fighting is unique to the Camargue region and during the course, a team of raseteurs dance around the bull in an attempt to get close enough to remove three items from its horns: a string, tassel and a cockade. The bravery and agility of the raseteurs is impressive, when the bull is chasing them, they must leap up onto the fence of the arena and there is no place for even a tiny error in their footing. If not they’ll find themselves falling onto a pointed horn! Unlike the Spanish corrida or the recortadores, the star of the show here tends to be the bull, who’s name is given pride of place on the billing along with it’s stud. 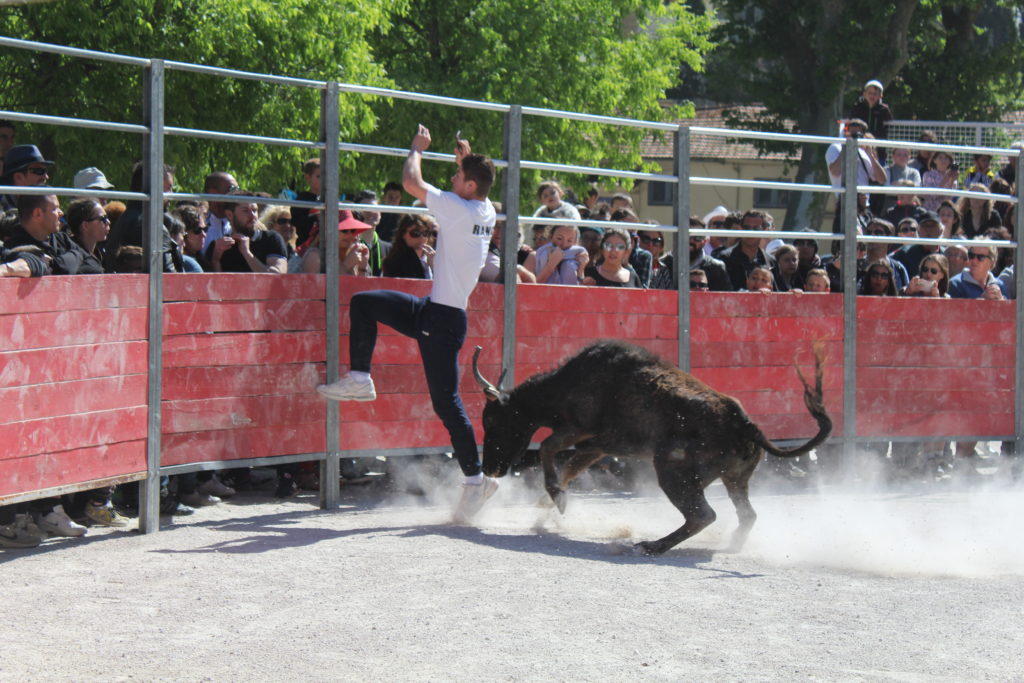 The Abrivado is a fast paced running of the bulls with a difference. A team of Gardians ride abreast down a narrow road, steering 2 or 3 of the Camarguaise bulls along with them. The young boys of the town throw themselves into the hurtling knot of charging animals, grabbing onto the tails, the horns, any part of of the bulls, trying to bring them to a standstill. They rarely succeed, even with the small sized Camargue bulls, but the sheer adrenalin is why they’re there!

It’s definitely worth seeing this local version of the more famous Spanish running of the bulls. Of course for me, the inclusion of a group of riders makes it so much more exciting. The talent of the Gardians is exceptional – being able to ride abreast down such a narrow road while looking behind them is no easy feat. I particularly loved their snazzy shirt and tie combinations. Never let is be said that being a Cowboy isn’t an elegant job! 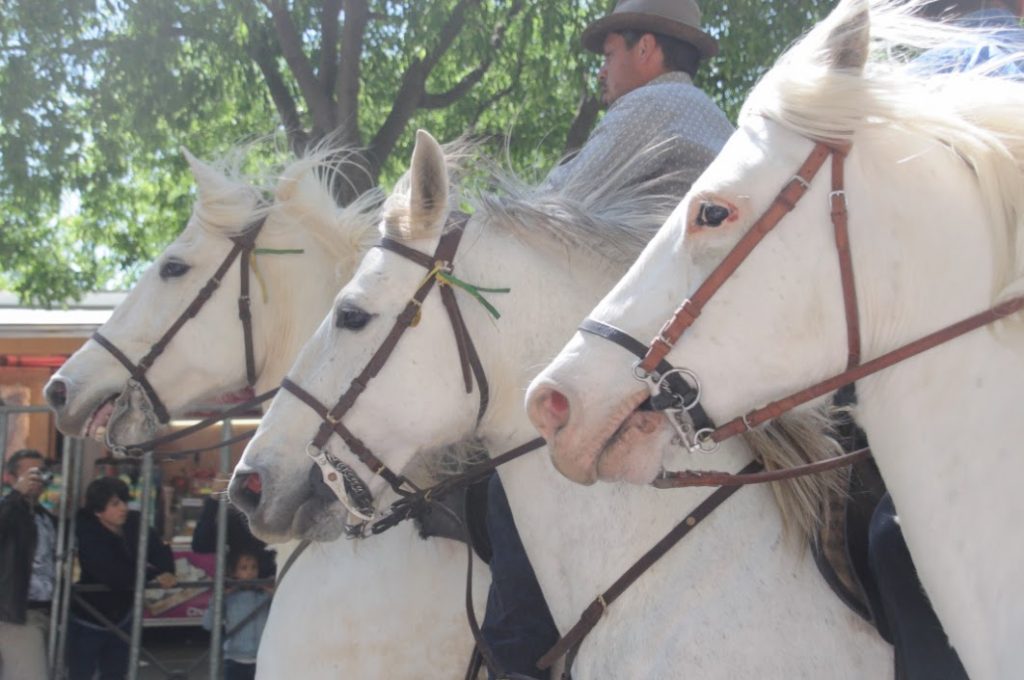 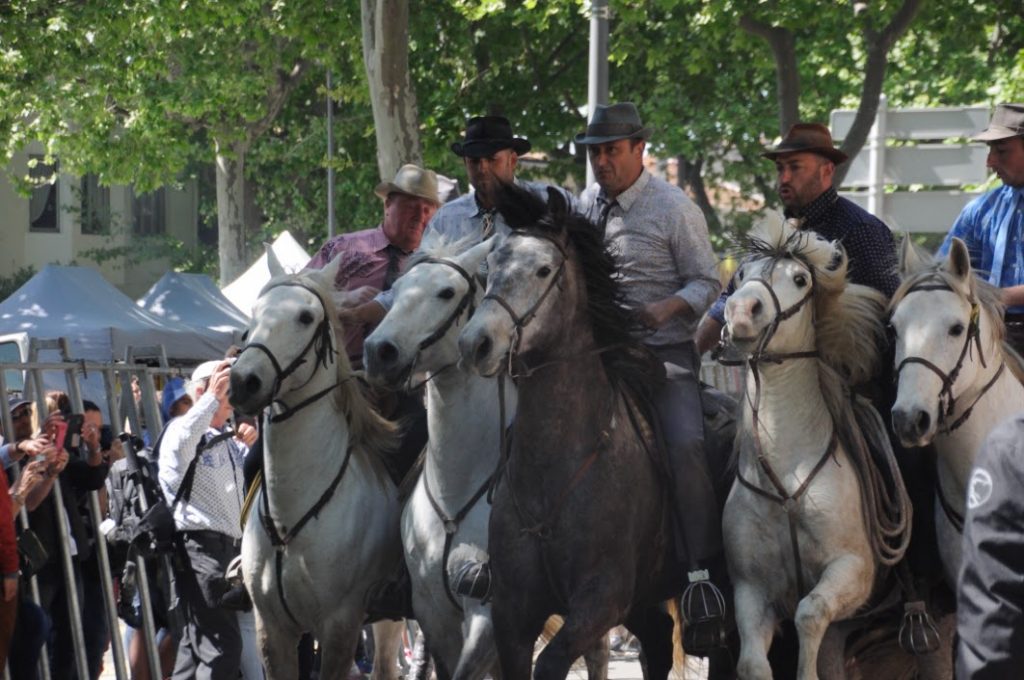 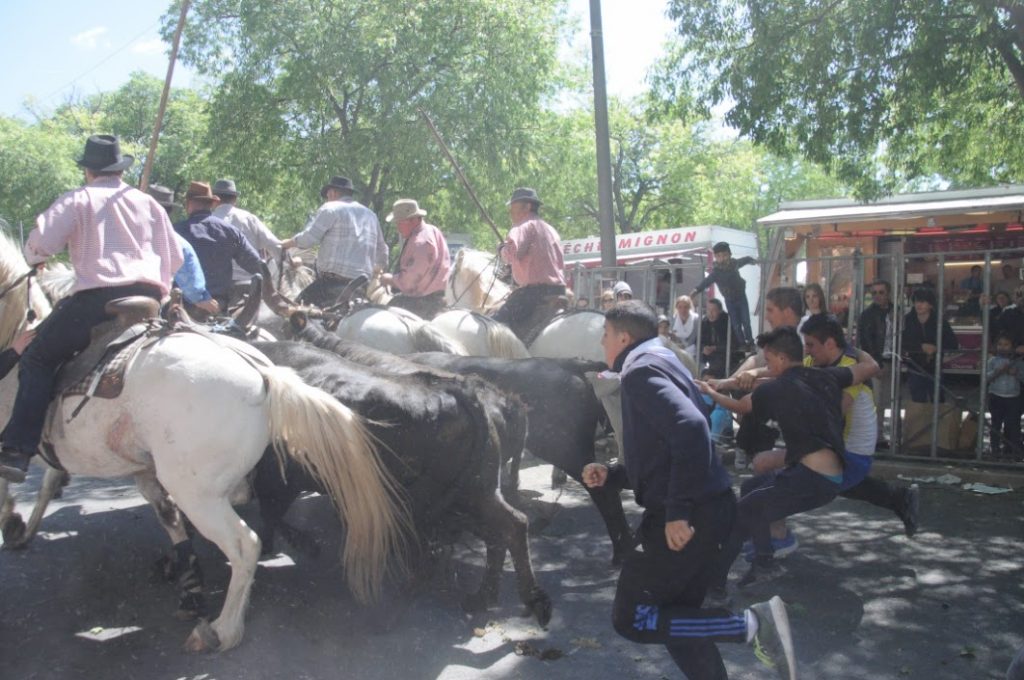 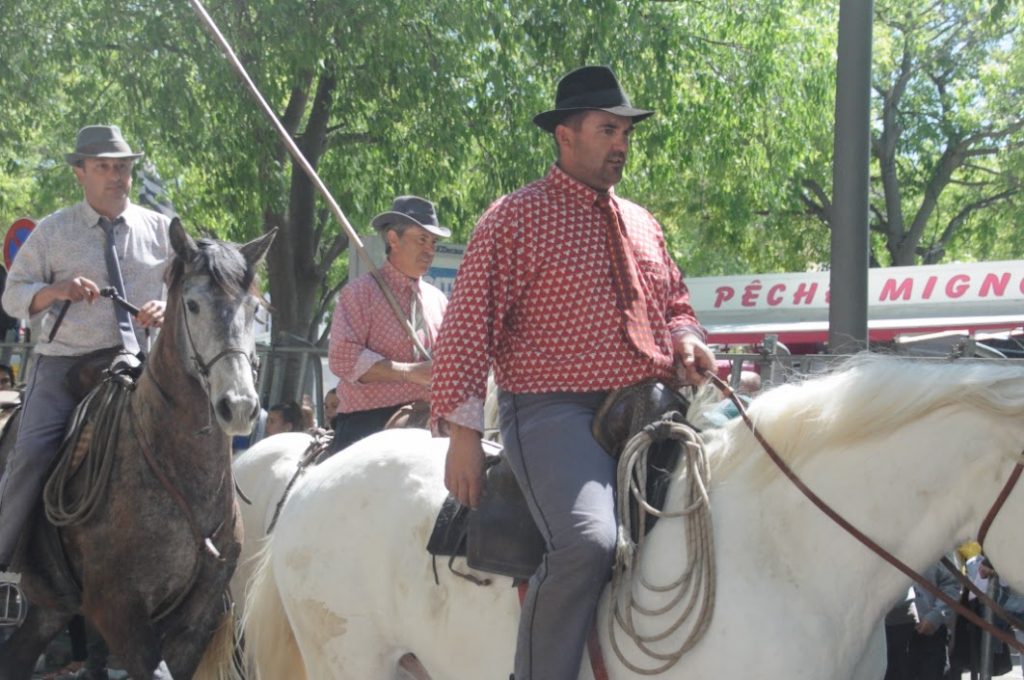 During Easter most of the restaurants do a special menu which tends to be smaller, easier things to cook/serve, such as cold meat and cheese platters. However, the main dish for easter is the Daube or Gardiane de Taureau, unique to this area. The braised bull is stewed in a pot with a mix of different ingredients, depending entirely on who is making it. The version we had at a little bistro on Rue de Porcelettes was cooked with a tomato and red wine base and was mixed with capers and garnished with coriander! It was absolutely delicious , served on a bed of rice, not at all what I was expecting from French food to be honest, but the Camargue region is famous for growing rice. They even have a rice festival later on in the year! 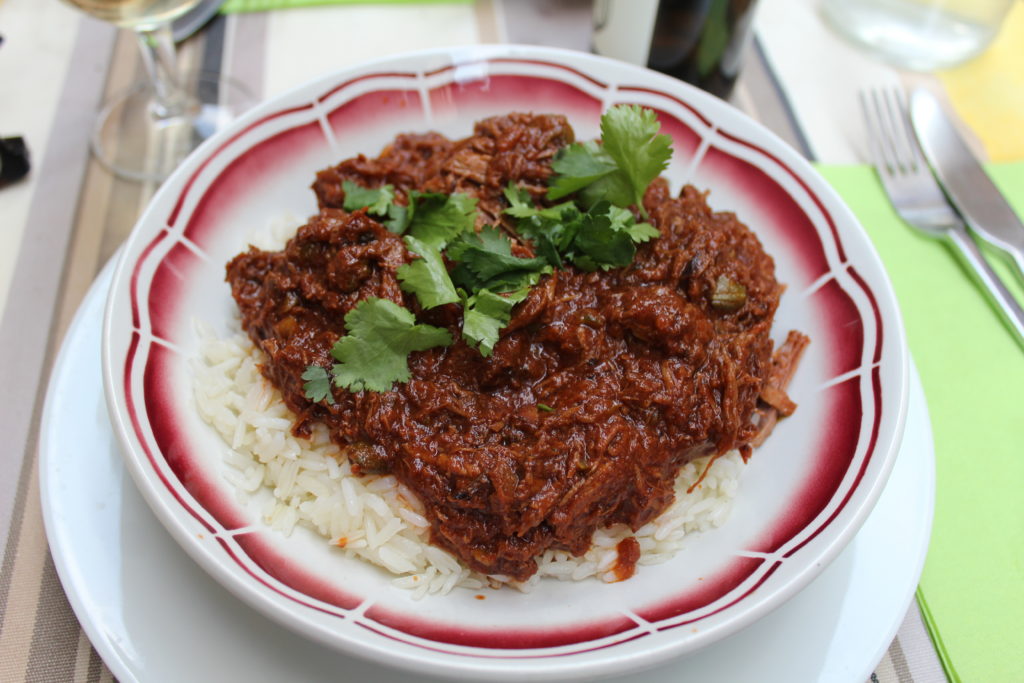 If you like a drink or two, then Easter in Arles is the place for you. The streets flow with alcohol and pound with music as the whole town and it’s 500,000 Easter visitors get into the party mood. The biggest celebrity is Paul Ricard, the pastis brand that seems to single handedly sponsor the whole festival. Everywhere you go the scent of anise permeates the air as people drink the green grenadine mixed liquor. One of the most popular drinks in France, Ricard’s secret reipe includes star anise, fennel seeds, liquorice and Provençal herbs. If, like me you can’t stand the scent or taste of anise, there are plenty of cocktails on offer too, so don’t be disheartened. Make sure to pick up one of the free Union de Clubs Taurins de Paul Ricard neck ties – a club, founded in 1955 by Ricard and his friends, to bring together all the bullfighting fans. You’ll feel naked without one! 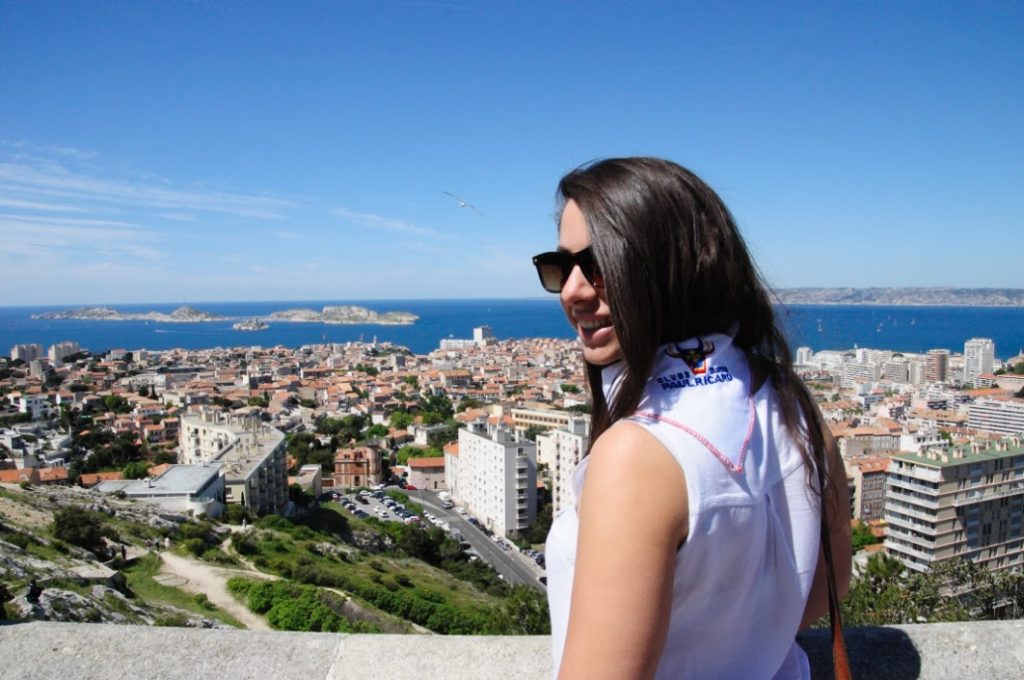 You won’t have to deliver any mail on this Jour de Fête, unlike Monsieur Hulot, but you’ll definitely get carried away by the locals and be influenced by too much wine!