On the northernmost coast of County Antrim lies the small, grey stone village of Bushmills, named for the river Bush that snakes through and the old 17th century watermill.

As you walk down the road to the distillery the first thing that will hit you is the strong scent of whisky permeating the heavy air. I stood still for a while with my eyes closed, inhaling deeply. The rich peaty whisky blended with the smell of the wet earth and the icy, stinging wind was my personal blend of Northern Ireland and a moment I’ll always associate with my visit. 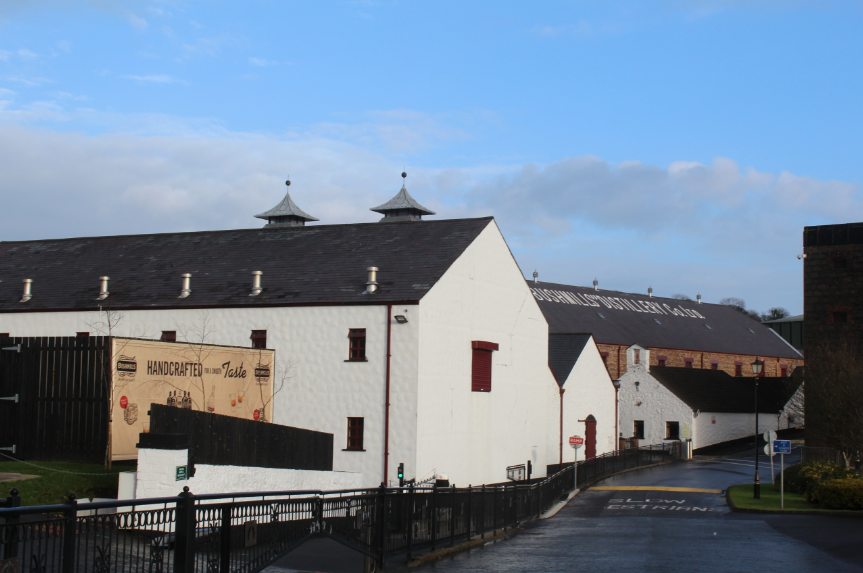 Sir Thomas Phillipps was granted a license to distill in this area in 1608 by King James I making the site the oldest licensed distillery in the world. Bushmills was officially set up in 1784 and has had a long and fascinating history. The company owned it’s own ship, SS Bushmills to transport the whisky all around the world. In fact the US was a key consumer market and the prohibition hit the company hard. Luckily they did well in the end as the director predicted the end of prohibition and stockpiled whisky to send over. There’s no denying that this is a huge tourist destination, with 120,000 visitors a year dropped off by a flock of pristine white coaches that make the daily migration up the Causeway Coastal Road. 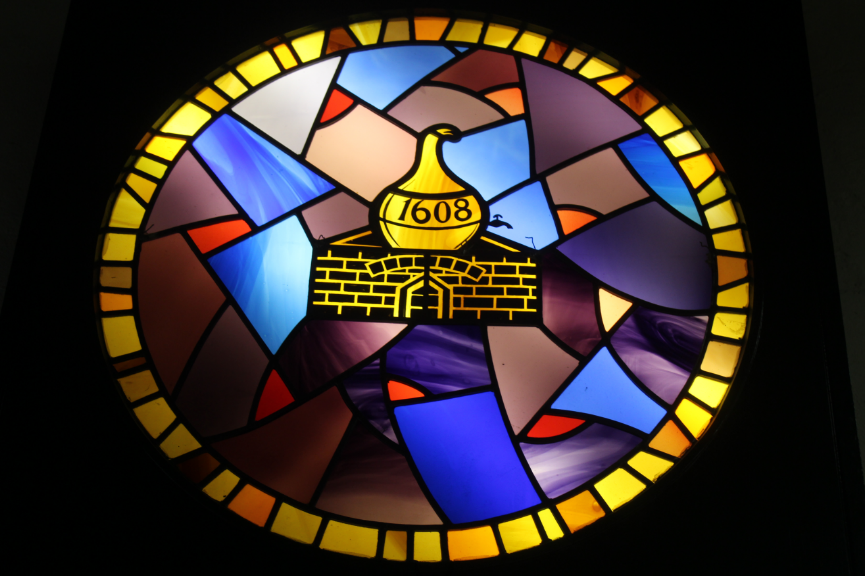 The distillery itself is made up of a curious assortment of different buildings, some painted a stark white with dark slate roofs, others built with deep red bricks. The name of the distillery is etched in white across the tiles of the main building, which is framed by the instantly recognisable twin pagoda style towers. If you ever go to Northern Ireland you’ll recognise this building from the pound notes, as the Bank of Ireland printed an image of the distillery on the back of the £5, £10 and £20 notes to mark the celebration of the 400th anniversary of Bushmills.

Inside the ancient walls, you can go on a tour of the distillery, try some of the produce at the tasting bar, inevitably spend too much time at the gift shop and also eat some delicious Irish stew! 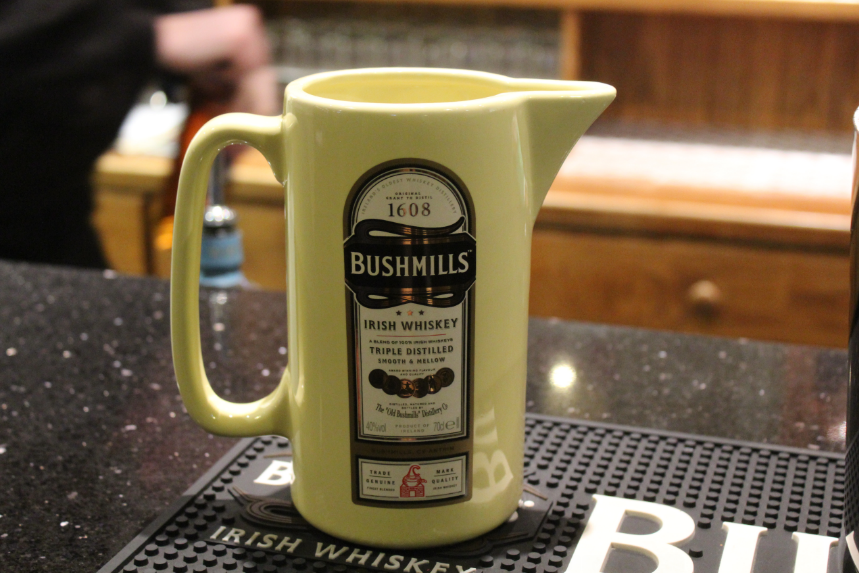 Make sure to look out for the wall of cartoons, newspaper clippings and old adverts on the wall to the right of the tasting bar. One of my favourites was an old advert for Bushmills:

‘Why drink whisky from across the sea?’

‘All they know about making whisky is what they learned from us. Every other whisky is, if you like, an imitation of the real stuff, discovered here in Ulster centuries ago.’

I was quite glad I didn’t have any Scottish friends with me at that point (having had a long discussion the day before with my French travelling companion after he came out and stated that he didn’t understand why restaurants bothered selling any wine other than French wine!) 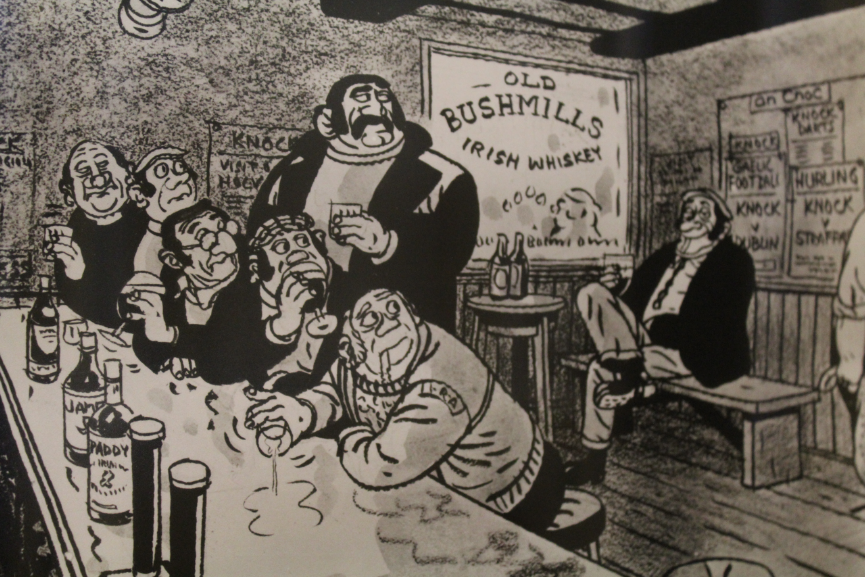 One of the most sought after bottles is the 12 year old single malt limited edition whisky which is matured in Spanish ‘oloroso’ sherry casks and only sold at the distillery in Antrim. You can even personalise and create your own label to make this deep amber coloured drink the perfect gift. Unfortunately we were only travelling with hand luggage but I made sure to a buy enough mini bottles of the Irish Honey Whisky to survive the rest of winter with hot whiskies!

Some of you may know the Tom Waits’ song – ‘Tom Traubert’s Blues’ – that incorporates lyrics from the famous Aussie folk song. The Bushmills Distillery is mentioned in the song…

That blue feeling of despair is sometimes attributed to Northern Ireland, but to me the untamed landscape, relentless weather, harsh accents and peaty liquor are  comforting and somehow wistfully romantic. 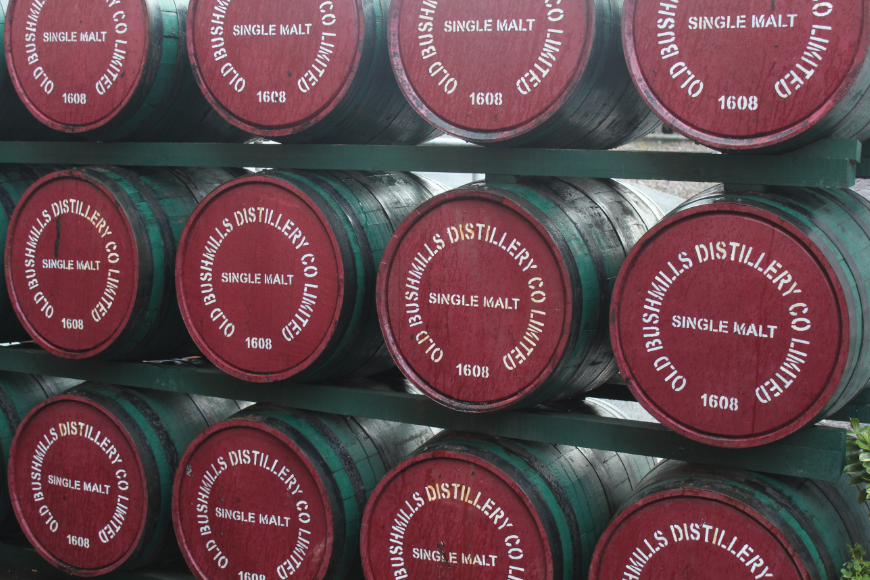 The Old Bushmills Distillery, while very firmly planted on the tourist trail, is still a place steeped in history that is renowned around the world. I was very happy that we chose to stop by, if only for the scent of the whisky in the misty air.