As you drive further and further out of Ho Chi Minh City, the myriad of stacked houses and the never ending buzz of motorbikes are slowly but steadily replaced by water logged rice fields and an occasional buffalo lazily wandering through them.

The road to Củ Chi is a long road lined with shacks filled with hammocks for weary travellers to stop and rest.

The sleepy pace of life outside the tunnel complex acts as a strong contrast to the deceptive peacefulness within. 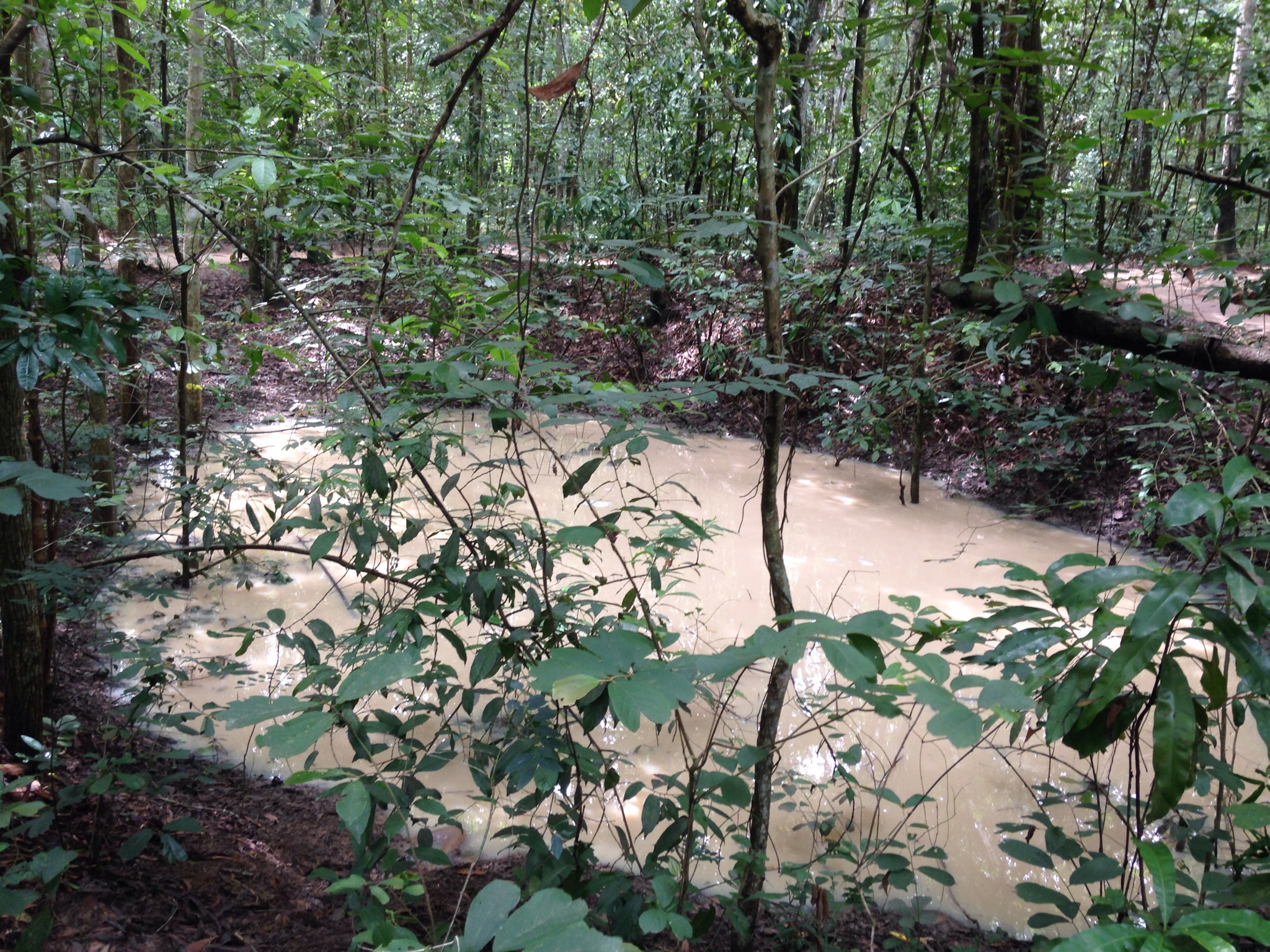 A beautiful green jungle, alive with a loud thrum of crickets is pock marked by bomb craters, riddled with vicious traps and haunted by a very recent history.

The visit to the Củ Chi starts with a black and white VHS documentary. The victory tape flickers along on the screen under a portrait of Uncle Ho. The outdated and eerily cheery music plays as the Australian accented narrator describes using sharp slivers of bamboo to hunt down the Americans like animals.

The motto of the local people was ‘Rifle in one hand, plough in another’. 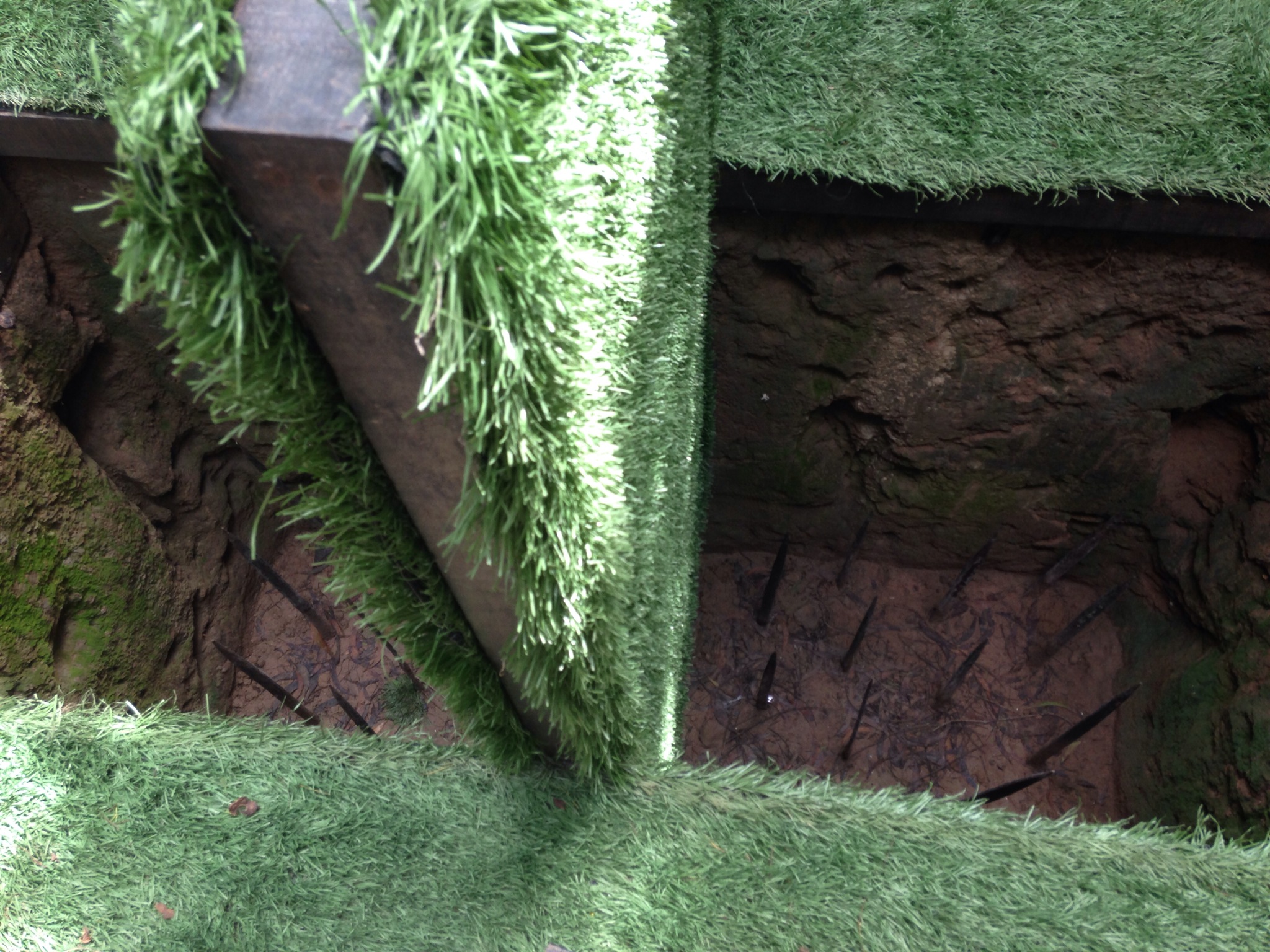 It’s hard to take the propaganda video too seriously, yet at the same time it’s easy to understand the pride of the people who, armed only with bamboo slivers and recycled bombs, evaded the great power that was America for so long.

The locals started digging tunnels back in the 40’s, when the French colonisers were forcing the local people to work on the rubber plantations, and were used as a way to evade capture, running between the houses.

After watching the video you’re ushered around a number of traps, trenches and tunnel openings. The silence of the jungle is savagely punctuated by the dull rip and echo of bullets. The shooting range wasn’t something I was interested in, but it didn’t allow you to forget that this was once a site of intense suffering, on both sides. 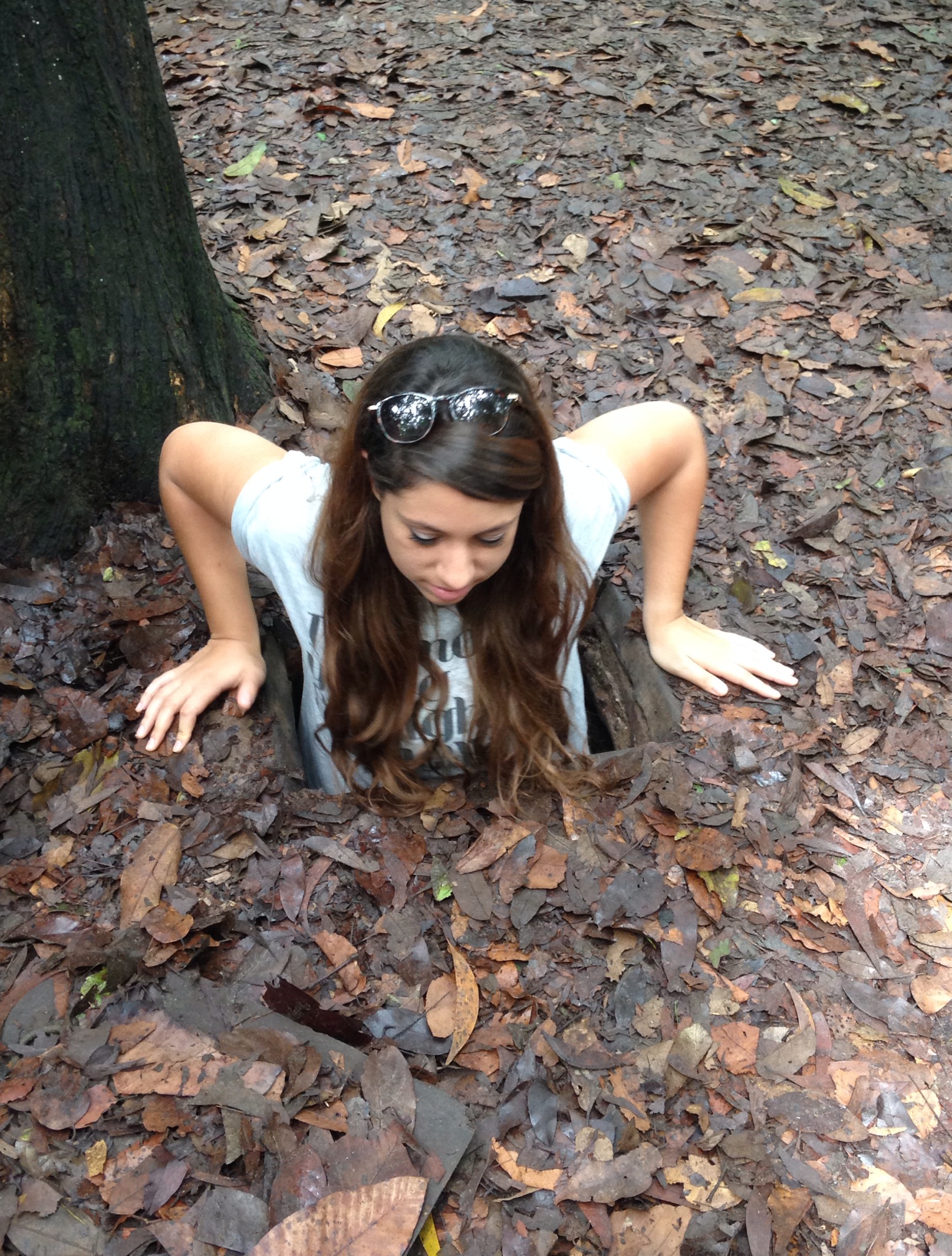 I dreaded descending underground, the idea of being in a tiny hole with limited air in the dark terrifies me. But I knew that I could never even begin to understand what the VC endured until I had taken a small glimpse. The tunnels – widened for tourists and dimly lit with lamps – were worse than I expected.

Though the entrances have been completely opened up, the air is stale and hot and the stifling feeling of being trapped is pervasive. I can’t even imagine how much worse it would have been at the time when the only ventilation was via the tiny holes disguised as ant hills; when bombs were raining down on them and poison gas was being pumped into the openings. 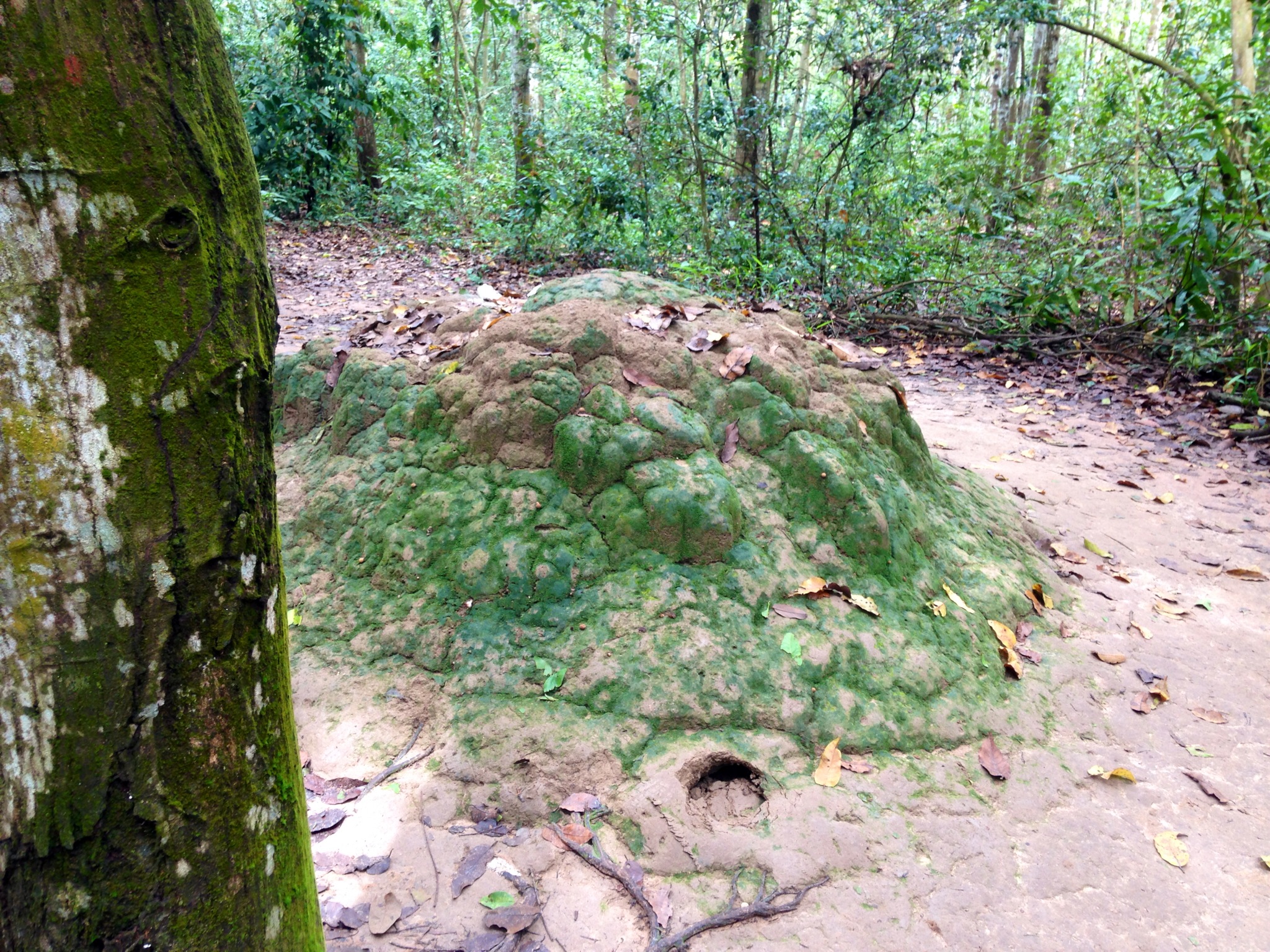 A handful of bamboo thatched huts are home to life size models of the VC soldiers showing how they went about their daily life in the war zone – sawing down the unexploded American bombs, stripping the metal and making spikes for their endless collection of booby traps.

The VC soldiers were incredibly resourceful, finding a clever and simple solution to every problem they encountered. The Americans used dogs to sniff out the entrances to the tunnels, to which the VC responded by placing chilli powder at the entrances – a sure way to get any dog to back off quickly and lose their sense of scent. 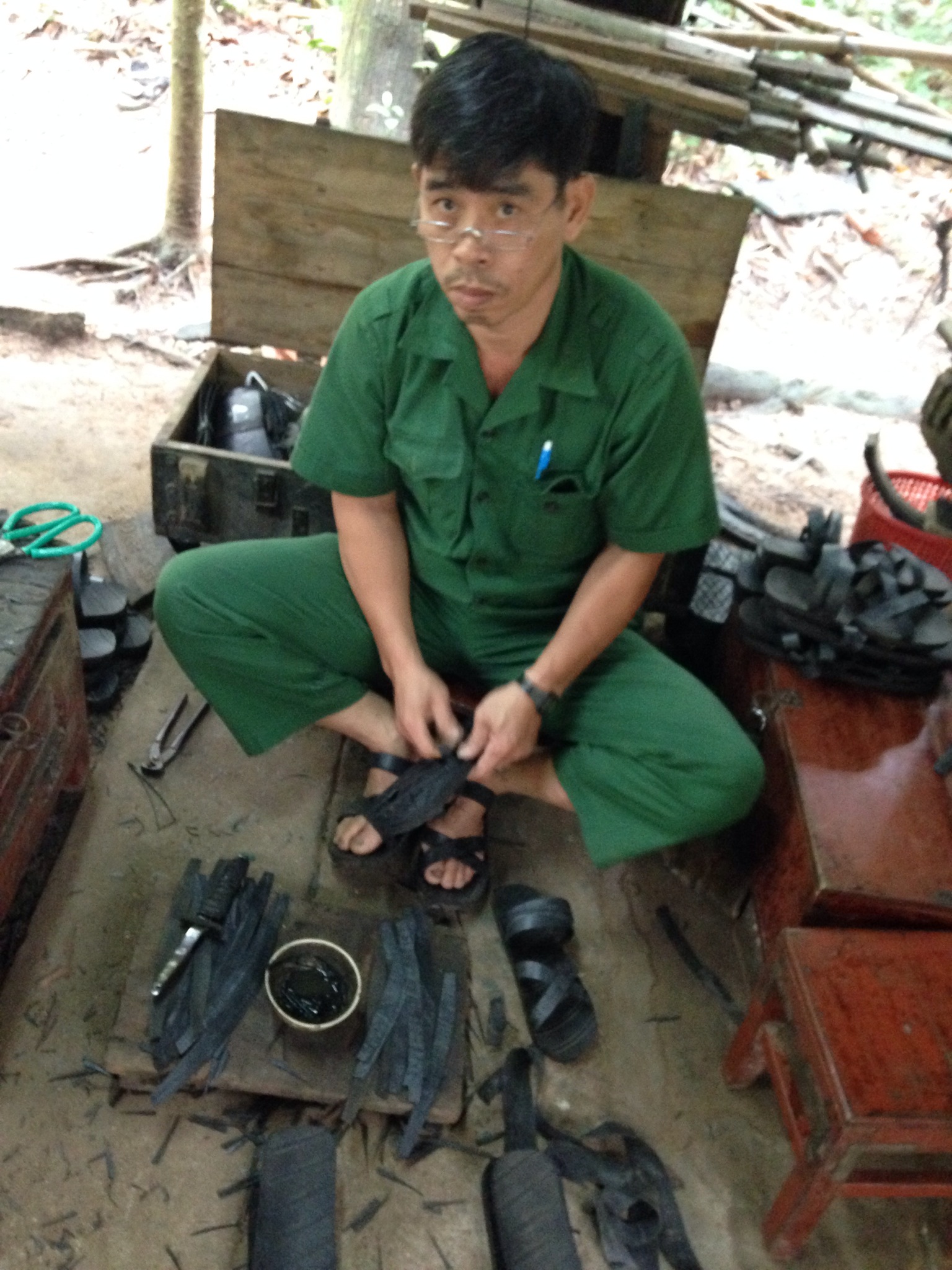 Local people work on site to show how traditional foods were made – such as rice paper, and how the rubber sandals were crafted. These special sandals could be worn either way around, and were worn back to front when the VC were trying to lead the American soldiers in the wrong direction.

Before we left, we sat down for a quick refreshment, which I think was needed both physically after the heat of the underground warren and mentally as well. A pot of pandan tea and a plate of cassava with a crushed peanut, sugar and salt dip. It was simple, but like all Vietnamese food, incredibly tasty. 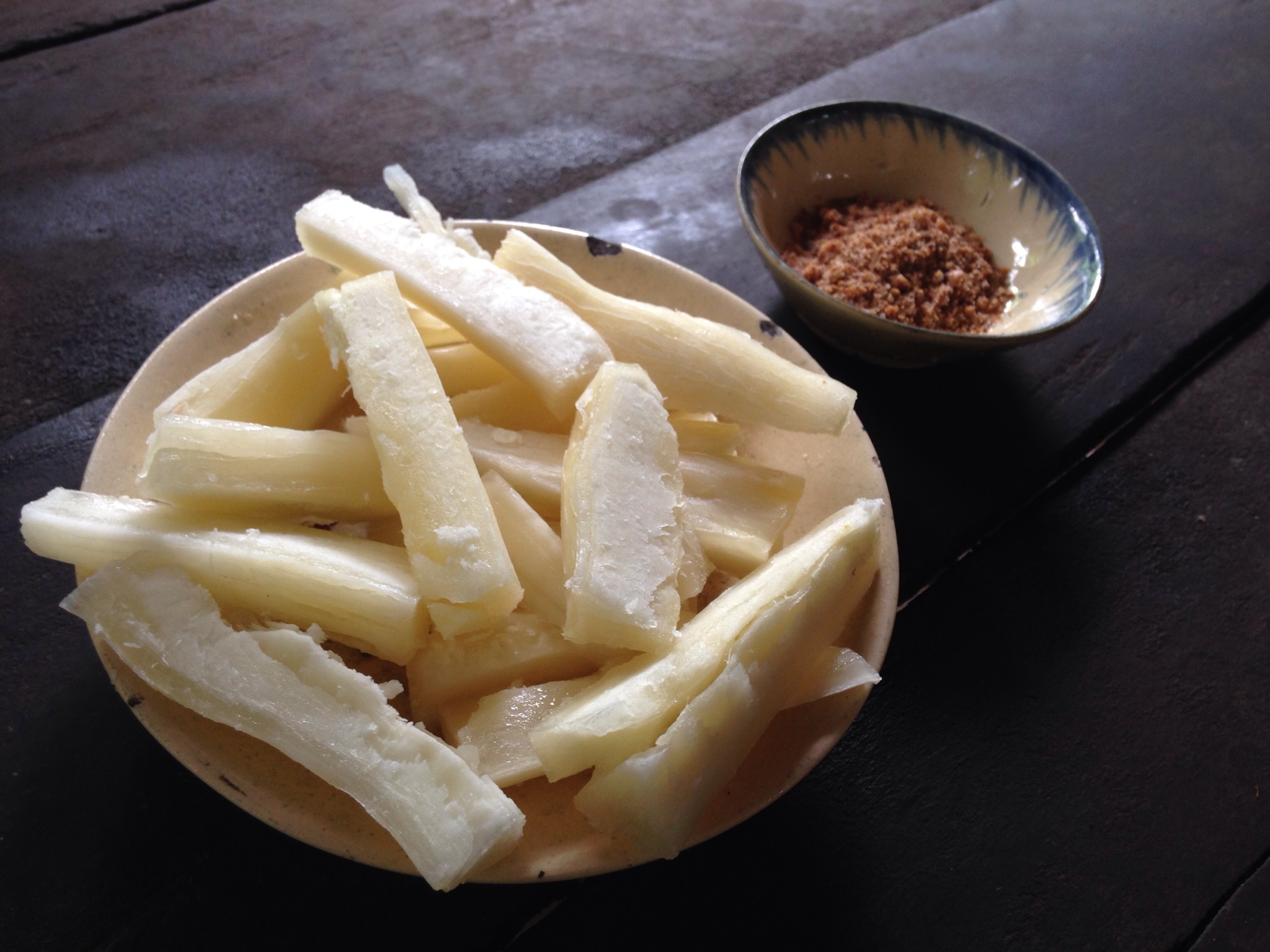 I would definitely recommend visiting the Củ Chi tunnels. I usually shy away from delving too deep in the horrors of the past – I didn’t visit the Killing Fields in Phnom Penh – however I feel this was important to see. Ignore the propaganda movie, and just listen to the story the tunnels themselves tell you.

As we drove away, the dark forests of rubber trees seemed to rise up and envelop us, a thousand trees bleeding silently.