Either way, when I saw the opportunity to go and spend half a day at the Bird of Prey Centre, home to the English School of Falconry, I couldn’t pass it up! 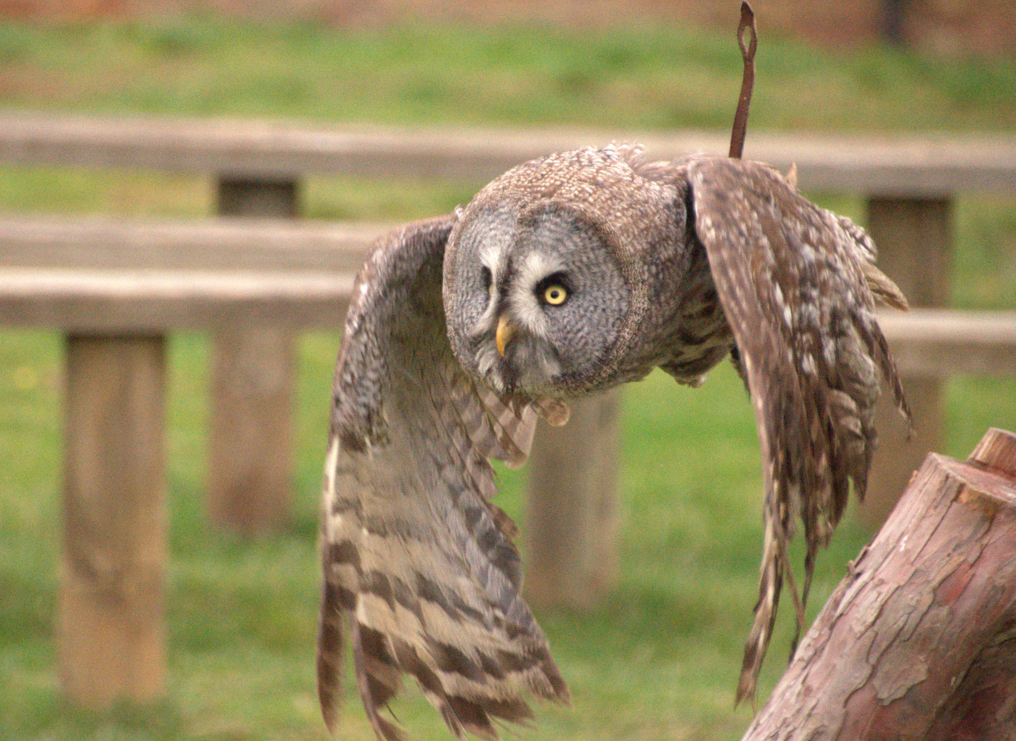 The Centre is easy to reach from London, it’s a quick train ride from Kings’s Cross to Bedford, and an even quicker taxi journey on to Cotton End Road where the black wooden farm sits nestled around a bend.

Our teacher for the day was Lucy, a really friendly girl who certainly knew a lot of fascinating facts about all the birds! She started us off by showing us how to fly some of the owls, starting with a barn owl, and moving onto a young and incredibly cute tawny owl! 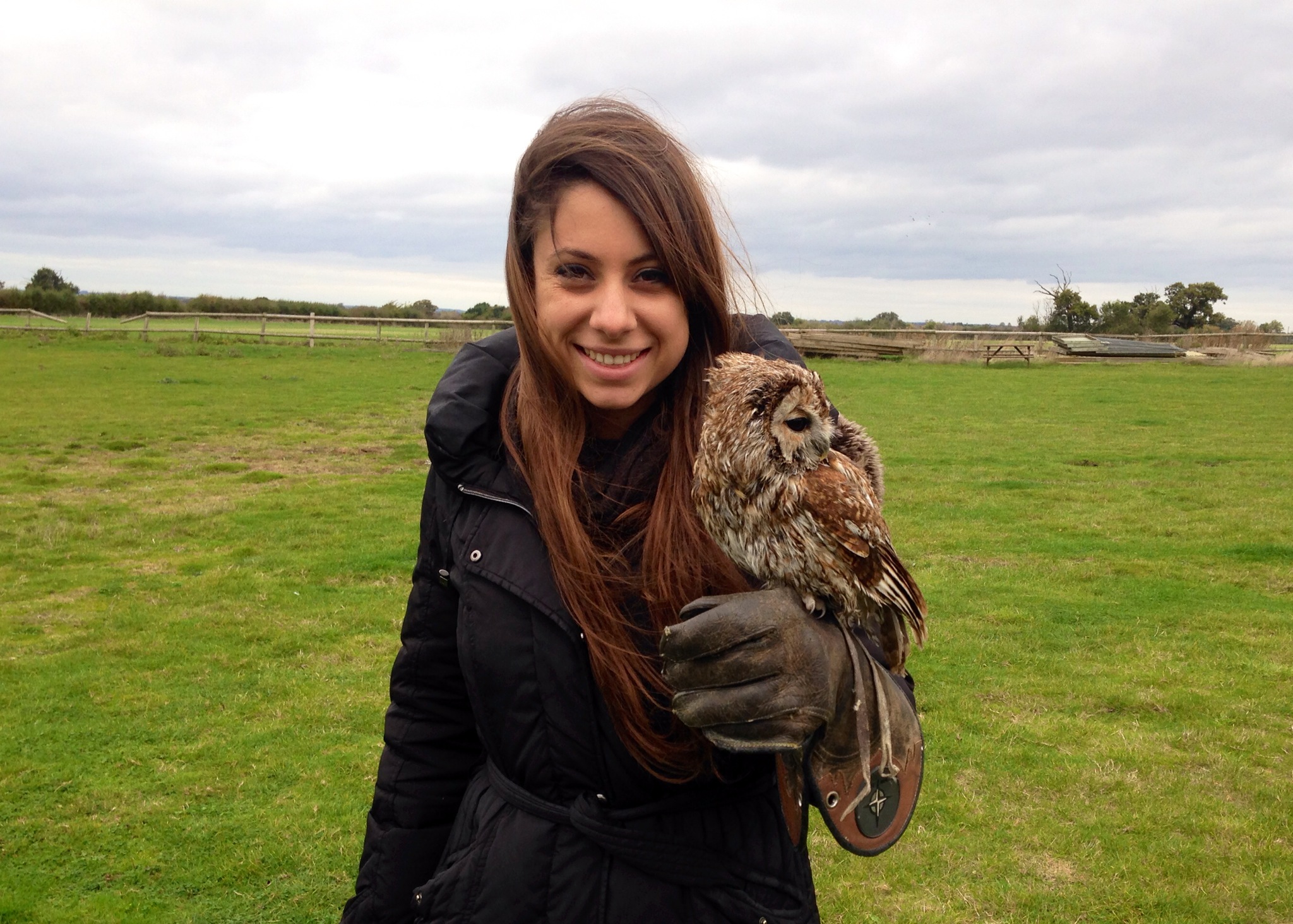 When she met us, one of the first things she told us was ‘real men hold small, fluffy birds’, which made us all laugh. It’s easy to imagine that people always want to hold the biggest birds, when in reality some of the smaller birds are just as fascinating!

The next bird we met was the Great Grey Owl. With it’s large and somewhat melancholy moon face and deep set sherbet lemon eyes, it was one of my favourite birds. Although the Great Grey is the largest owl, it has a head no larger than a tennis ball, and is actually the lightest owl in terms of weight, the rest of it being made up entirely of fluffiness (or feathers)! 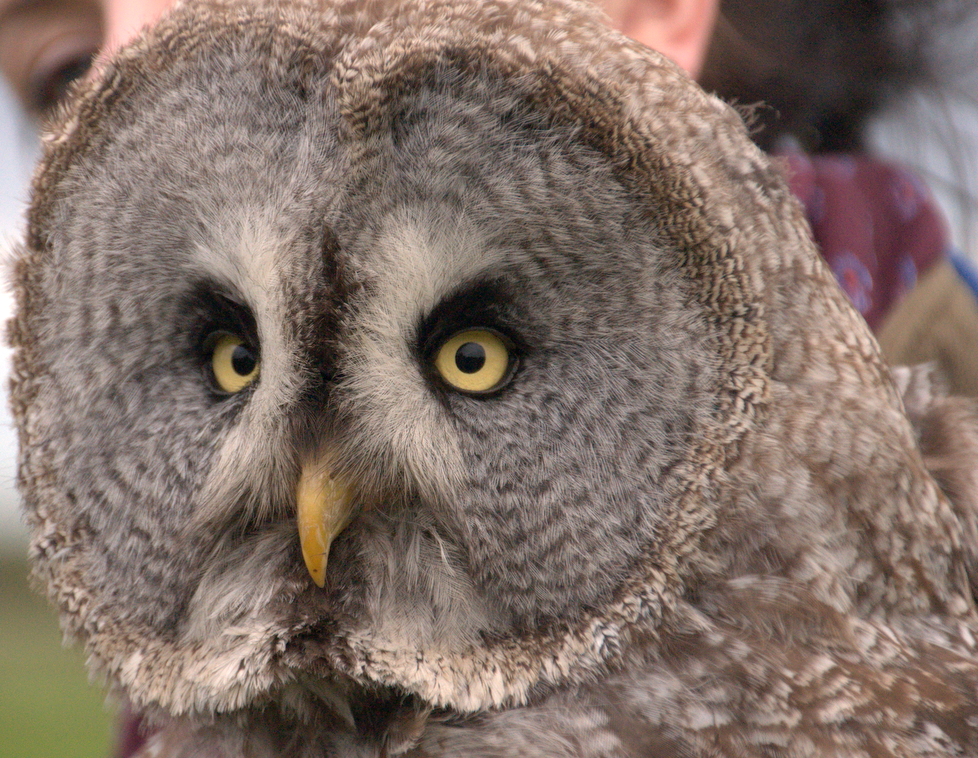 While this beautiful bird can tug at your heart strings when the wind blows and it’s tiny body is buffeted around, it’s a fearless hunter that can hear a lemmings heartbeat under 60cm of snow! It’s not hard to imagine how it came by the name ‘Phantom of the North’ when you imagine it gliding over vast wastelands of snow in the dark of night – a spectral shadow in flight. 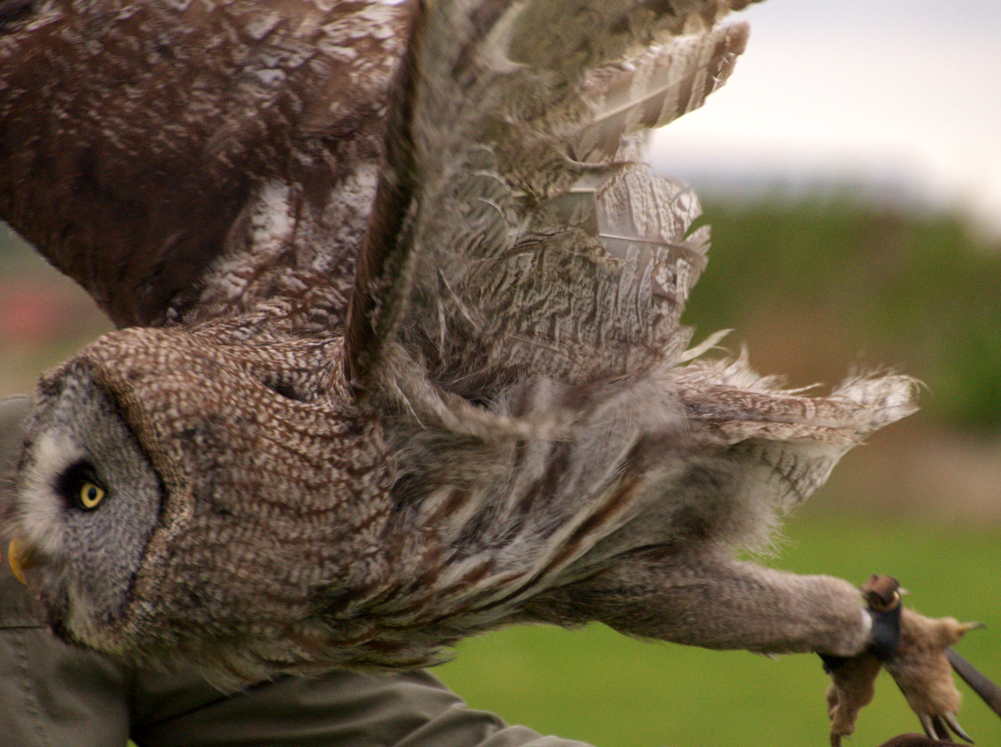 Next on our list of introductions was the Harris’ Hawk, and the last bird we’d be flying. The Harris’ Hawk originates on the opposite end of the Americas to the Great Grey – from the deserts of South America. 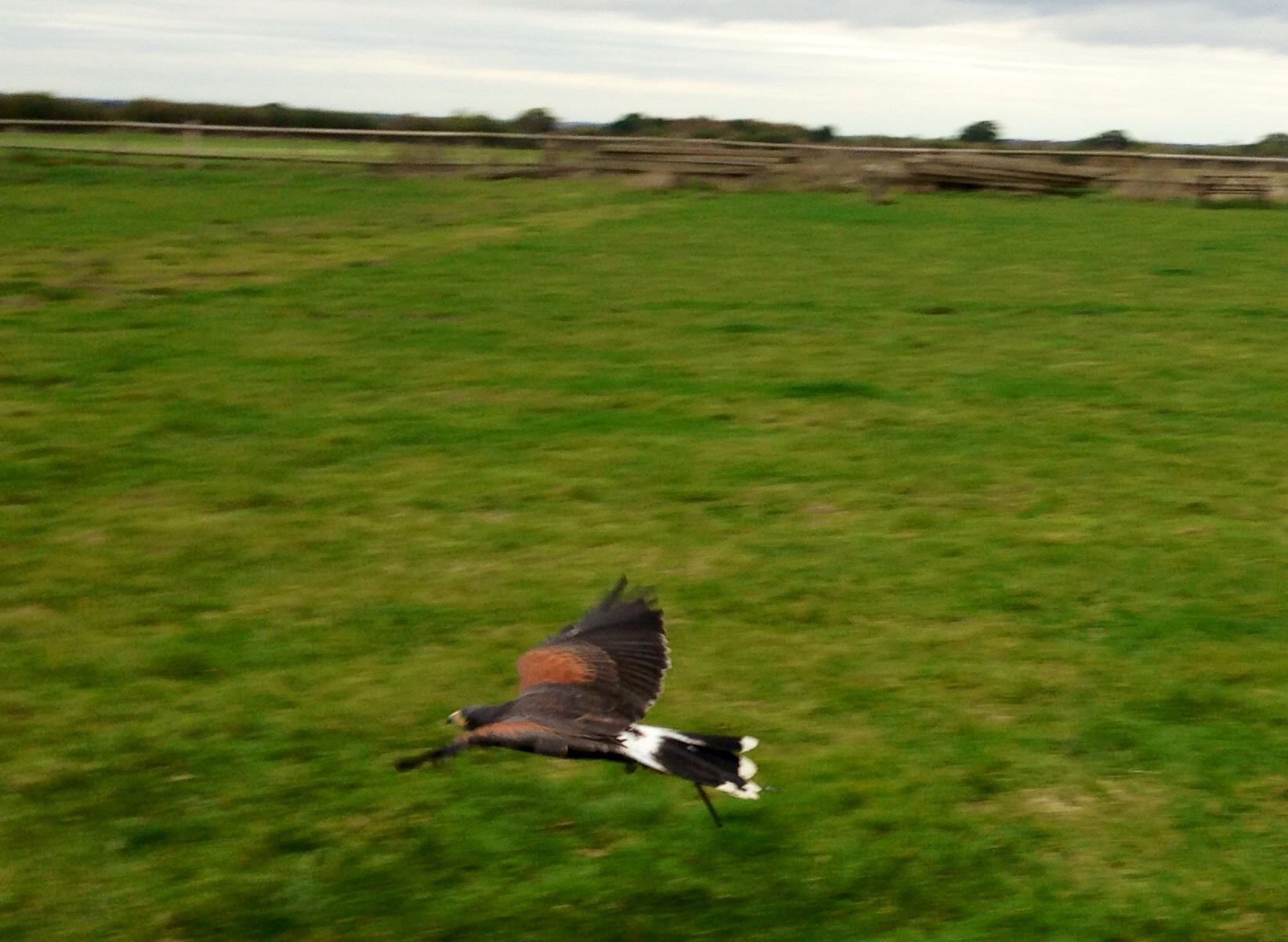 They are one of the more popular birds used for falconry as in the wild they often hunt in packs. This social nature is as a result of their intelligence and means they can be easier to train than other raptors. 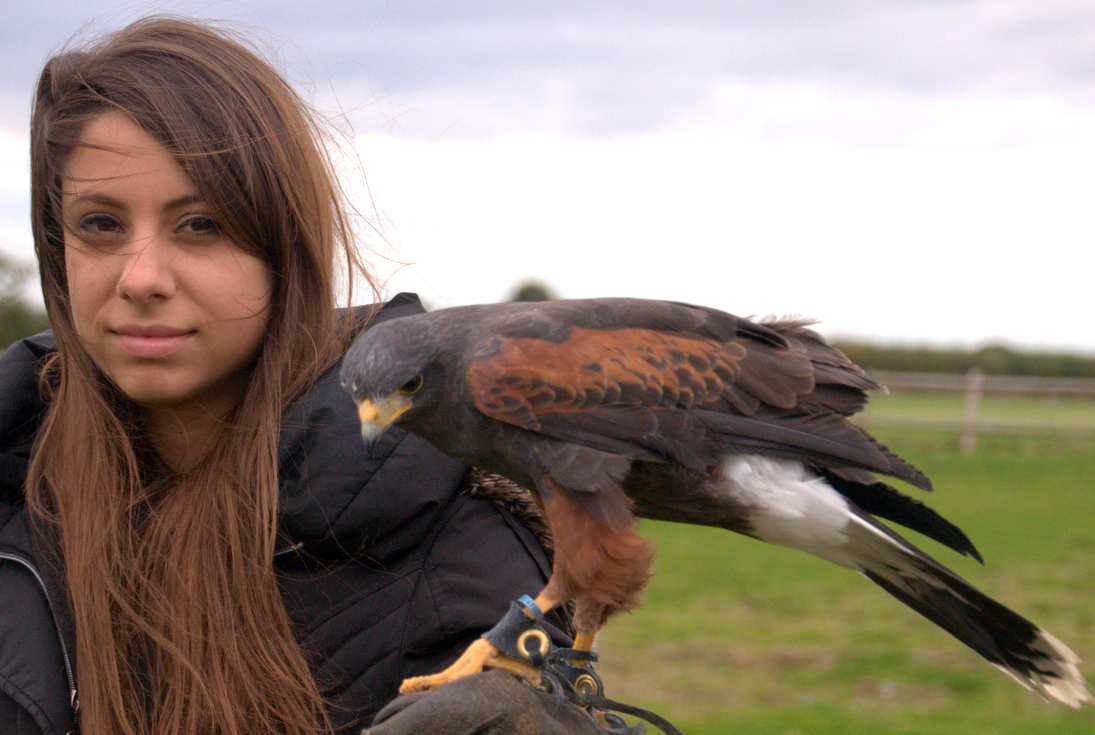 In the wild they practice a habit known as ‘backstanding’ where one hawk will perch atop a huge cacti, and then a number of other hawks will stand on top to form a leaning tower of Harris’! This is apparently either to get a better view or to provide shade in the hot desert, as they take turns to stand on top and spread their wings. 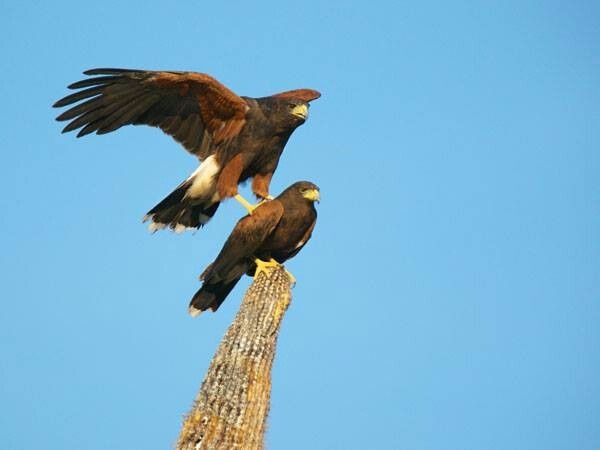 At the Centre you can take part in the ‘Hunting Experience’ where everyone has their own Harris’ Hawk, and they go out on a trek with the birds hunting live prey. Apparently anything your hawk catches you can take home with you! A very alternative way to get dinner!

After our flying fun, we headed inside for a much needed hot drink and biscuit. England might be horrendously cold all the time but they sure know how to keep warm with never ending cups of tea! I loved how the buildings seemed to have been repurposed from horse stables and tack rooms into little spaces for birds! 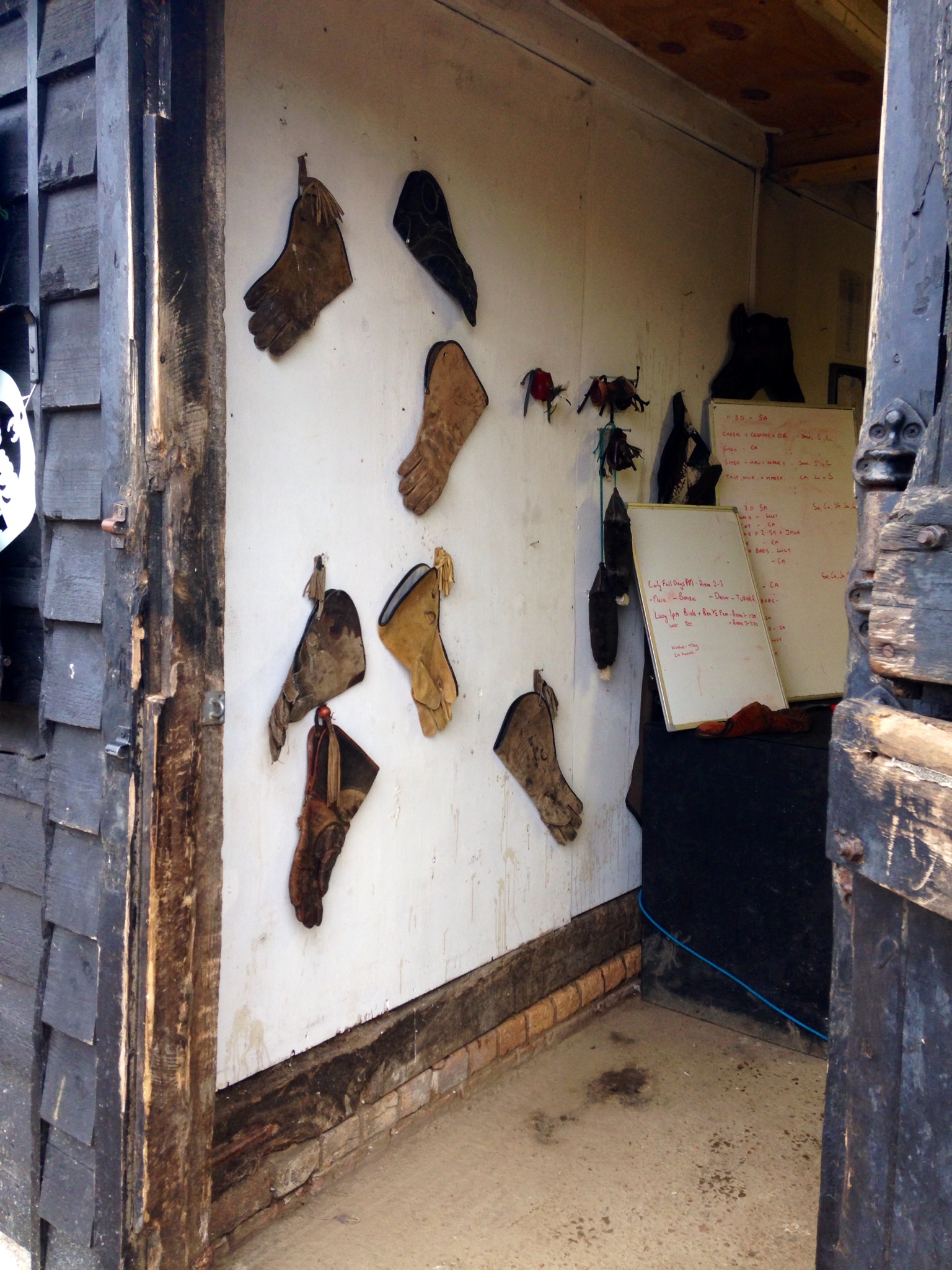 After warming up, we headed back outside to meet two birds at opposite ends of the size spectrum: a pair of Turkmenian Eagle Owls and a couple of American Kestrals. I’ve got to say, as impressive the Eagle Owls were with their tufted ears and haughty stares of burnt umber, I fell head over heels with one of the little Kestrals called Joey. 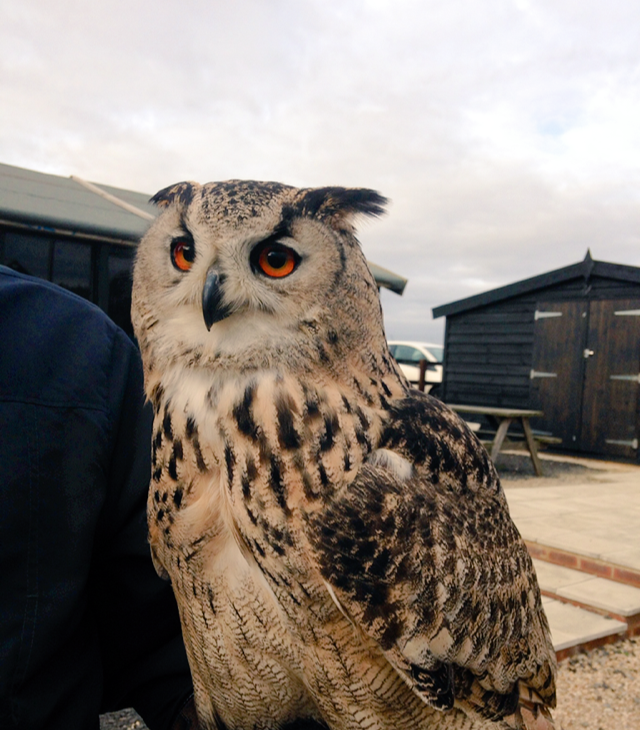 The American Kestral, or Sparrow Hawk, is the smallest bird of prey in America, yet in my eyes it is a creature of utter perfection. It’s plumage is a mix of soft, downy white, a dream like blue-grey and a deep rusted red. Each feather has a black arrow head at the tip. 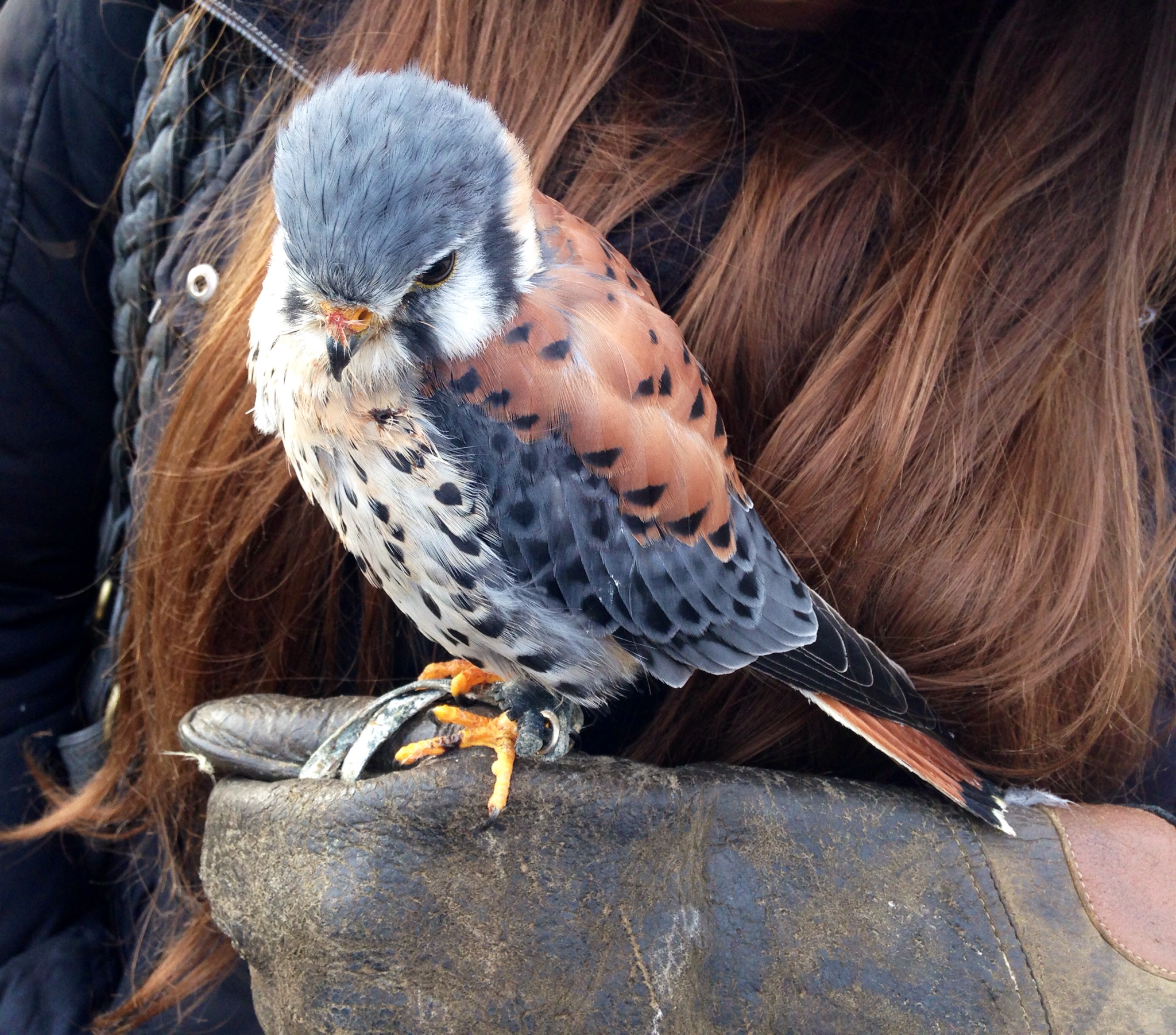 Though sparrow hawks are considered a beginners raptor in falconry (and were used mainly by priests in medieval times), they can sometimes catch and kill prey up to two times their size, such a quail! Pretty impressive for a bird weighing only 100g! I liked to think of Joey as a tough as nails, stone cold killer. 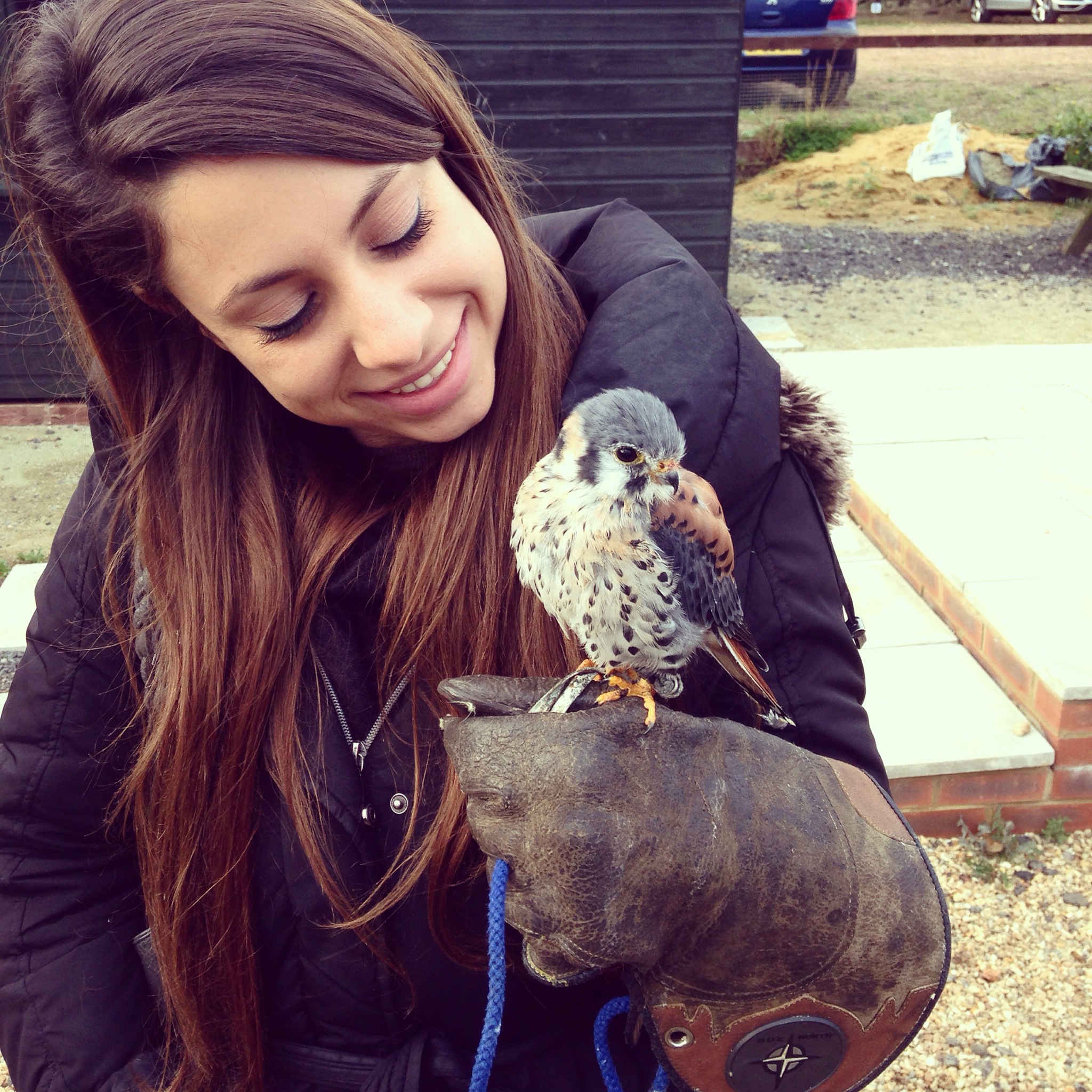 In order to meet our next raptor, the sparrow hawks had to be put away (and out of danger), so I’m sure you can guess what came next (this was in fact the last bird we got to meet). The mighty bald eagle: symbol of The United States of America! 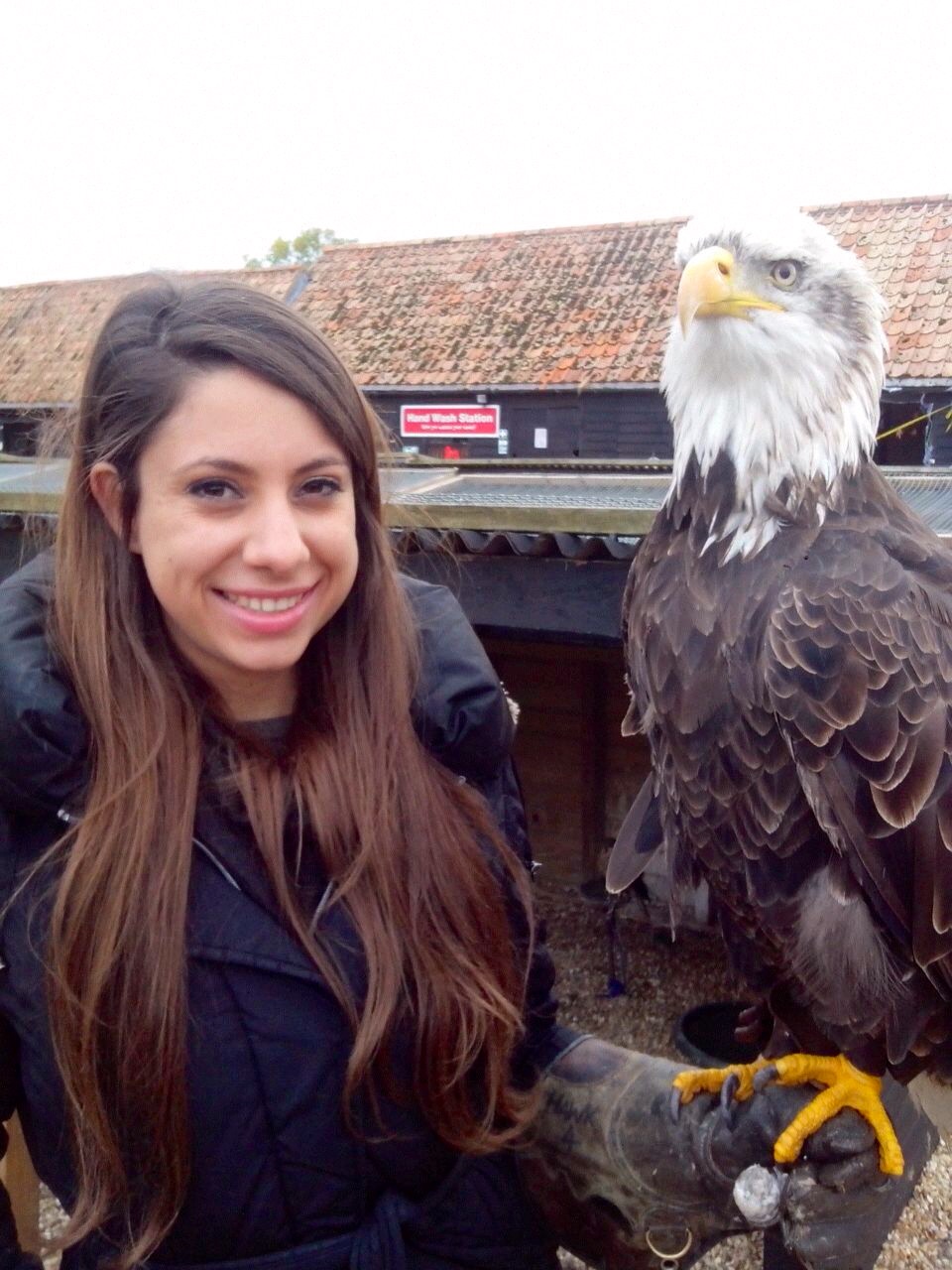 The eagles were known as the birds of kings and I have to say, you’d have to be one incredibly strong king to be able to ride and carry one of these guys on your arm. My arm felt like it would fall off after 10 mins – they are seriously heavy!

This king of birds was everything I expected. He peered at me with indifference as he was transferred to my arm then proceeded to stare rather fixedly anywhere except me. So beneath him was I in his estimation!

I never realised that the bald eagle is a sea eagle that feeds mainly off fish. For some reason I always associated it with white topped mountains and prairies. Though their primary food source is fish, they will also feed on other birds as well as mammals as big as seals, prairie dogs, deer and sheep!

The eagle is sacred to most Native American tribes as it’s considered a messenger between humans and the gods. Eagle feathers are just as special and as well as being used in tribal dances and headdresses, they are gifted to people at occasions such as graduations. 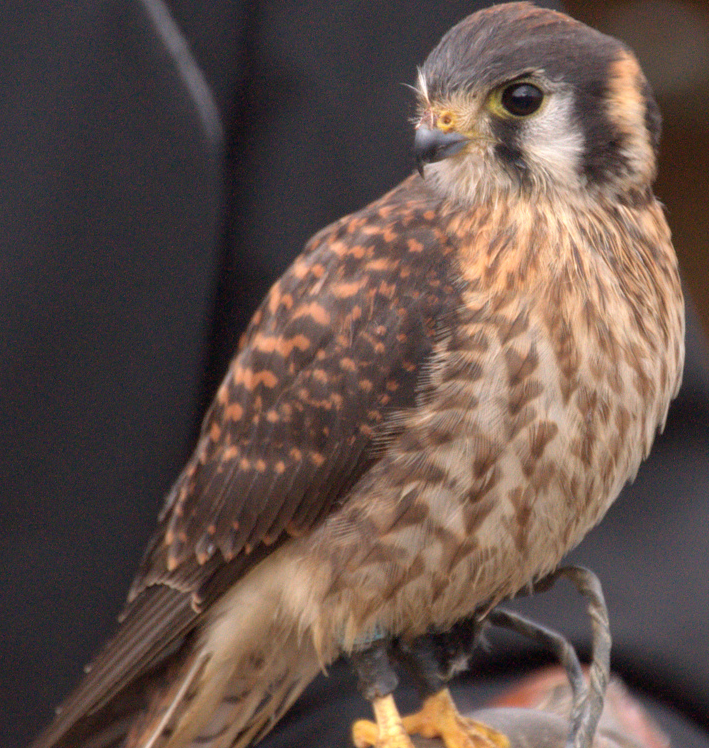 The final bird I’d like to mention (who we didn’t get to hold, but watched for a while as it dozed on it’s perch) is the Bateleur Eagle (or tightrope walker in French). So called for it’s distinctive rocking from side to side as it flies, as if trying to catch it’s balance!

This snake eagle can be found all around Sub Saharan Africa and some parts of Arabia. With it’s slick black body, chestnut upper wings, white underwings and bright red face and legs, it’s considered the most colourful raptor in the world. Unfortunately I wasn’t able to get close enough to get a good picture but Google images should serve you well!

This crazy eagle, the only eagle that will feed on venomous snakes, resembles a mix between some sort of clown, an ancient warrior, and an elegant yet modest lady in a hijab. I was totally mesmerised by it’s fascinating appearance. 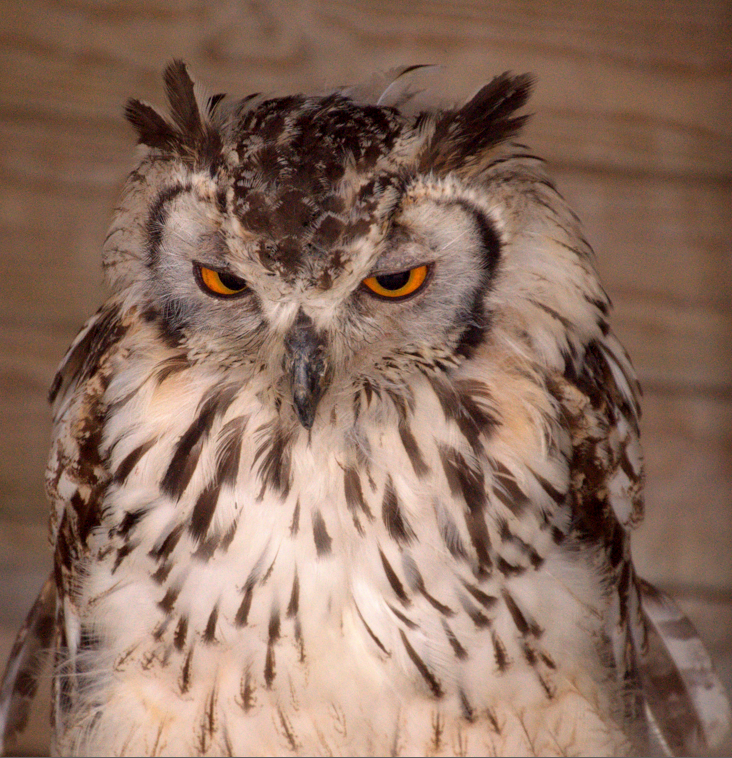 I would really recommend falconry or a bird of prey experience as a wonderful day out from London. A voucher would make a good gift for a friend or loved one who, like me, is fascinated by these creatures! Thanks to Lucy and all the staff for an amazing day out!