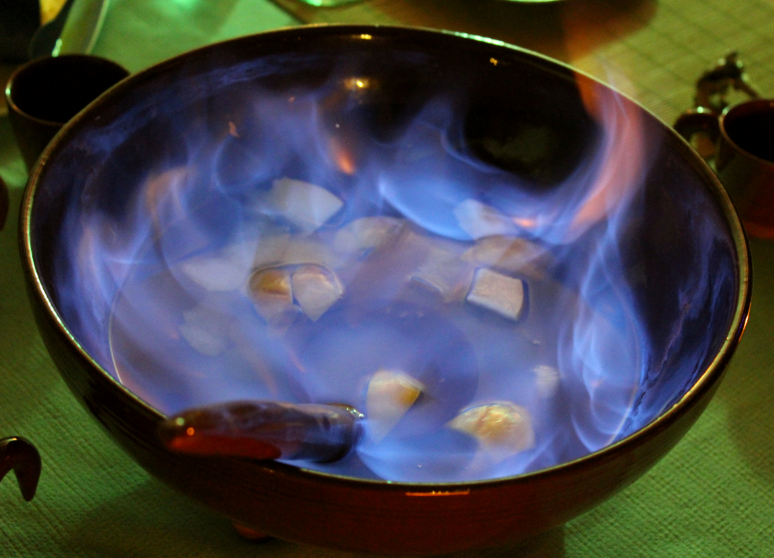 Spain is a land of contrasts and surprises. I grew up in the scorched yellow plains of the central meseta, where only Holme Oaks and gnarled old olive trees grow under the relentless sun. Far away in the North Western corner lies Spain’s secret garden – Galicia.

The craggy rocks of the Atlantic shoreline are flecked with softly gilded beaches and inland, swathes of Eucalyptus trees carpet the mountains and valleys. Their scent, mixing with the heady perfume of the native pine trees, creates a magical blend. With it’s filtered green light and glistening dew drops – this truly is an enchanted land – and that magic can be felt most potently at a traditional Galician Queimada. You can’t go to Galicia without taking part in a Queimada – a fiery drink shared among friends imbued by a spell.

The main ingredient of the Queimada is Aguardiente (which translates as burning water) – a spirit made from the leftover grape skins and seeds. Once the aguardiente is poured into the pot or bowl, sugar is added and then coffee beans, lemon and orange peel and grapes. The mixture is then set on fire which burns with mystical blue flames that lick the sides of the bowl and the ladle soothingly. 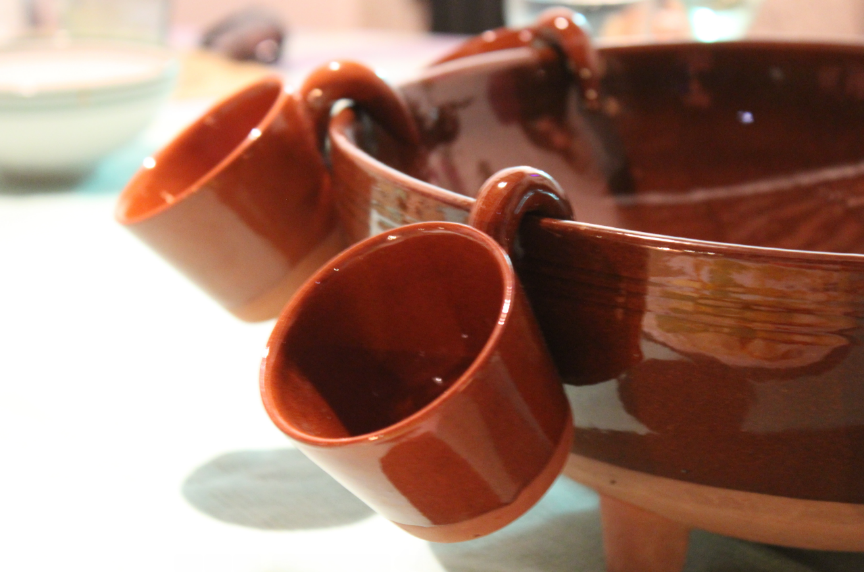 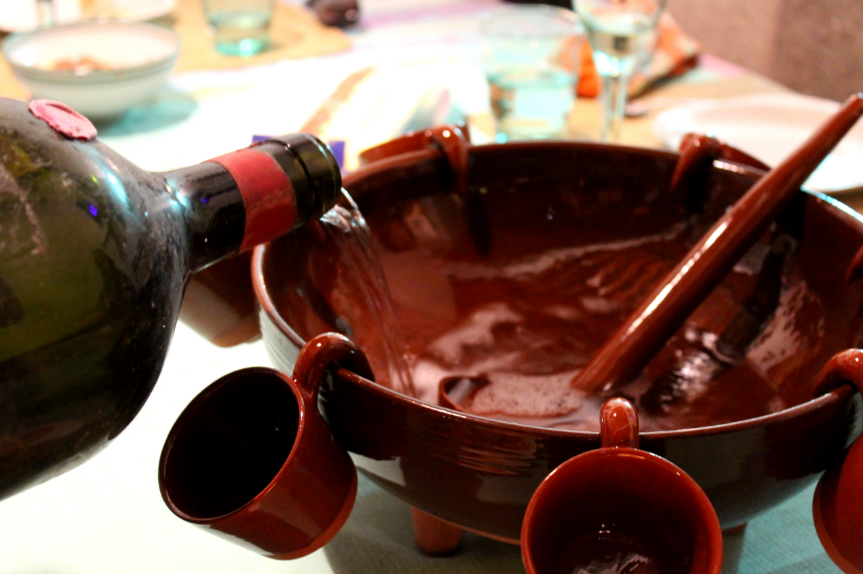 Traditionally the Queimada was always served in a hollowed out pumpkin which would add to the ghoulish feel – but nowadays a terracotta/clay bowl or cauldron is more commonly used. While some say that the tradition dates back to Celtic times, others say that it was introduced more recently in the 50s. Either way it’s a tradition that takes you back to an earlier, primitive time when people respected the evil spirits and warded themselves against them.

Sitting in the dark, we gazed at the mesmerising blue flames and listened to the solemn words of the conjuro – the spell recited as the drink is poured to send away the evil spirits and to wish good luck on those partaking in the burning liquor. I don’t speak Gallego but some of the words are close enough to Spanish to understand. Phrases like ‘corpos mutilados’ – mutilated corpses – drifted through the hot summer night air. 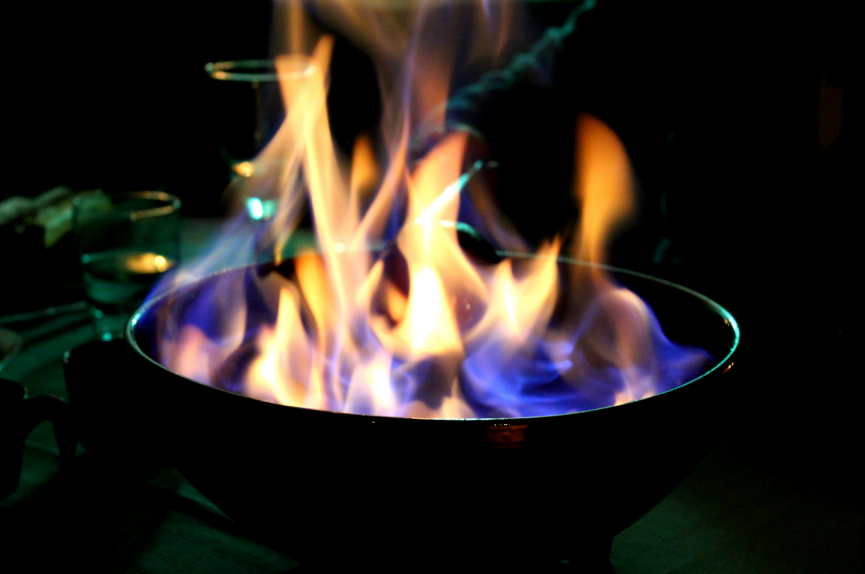 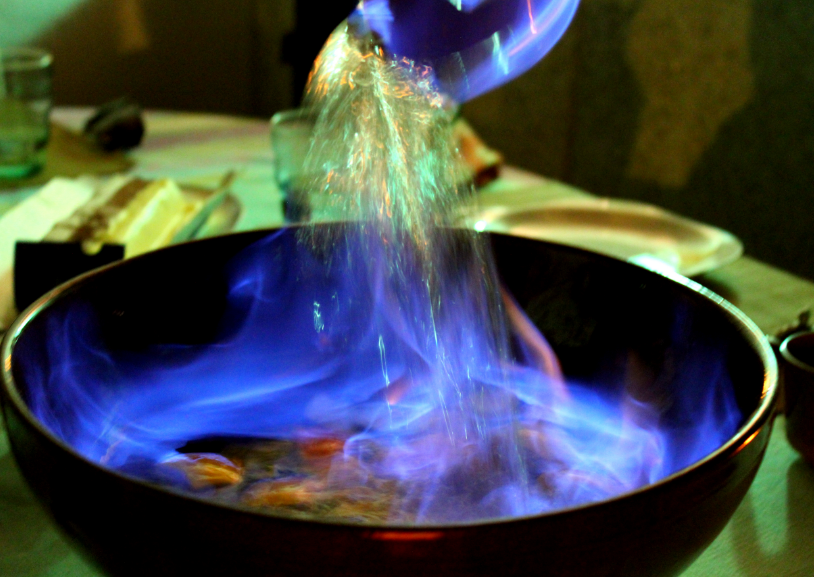 The traditional spell is translated as follows, there are definitely some interested lines in there!

Wisps of the Holy Company,
evil eye, black witchcraft,
scent of the dead, thunder and lightning.
Howl of the dog, omen of death,
maws of the satyr and foot of the rabbit.
Sinful tongue of the bad woman
married to an old man.

Satan and Beelzebub’s Inferno,
fire of the burning corpses,
mutilated bodies of the indecent ones,
farts of the asses of doom,
bellow of the enraged sea. 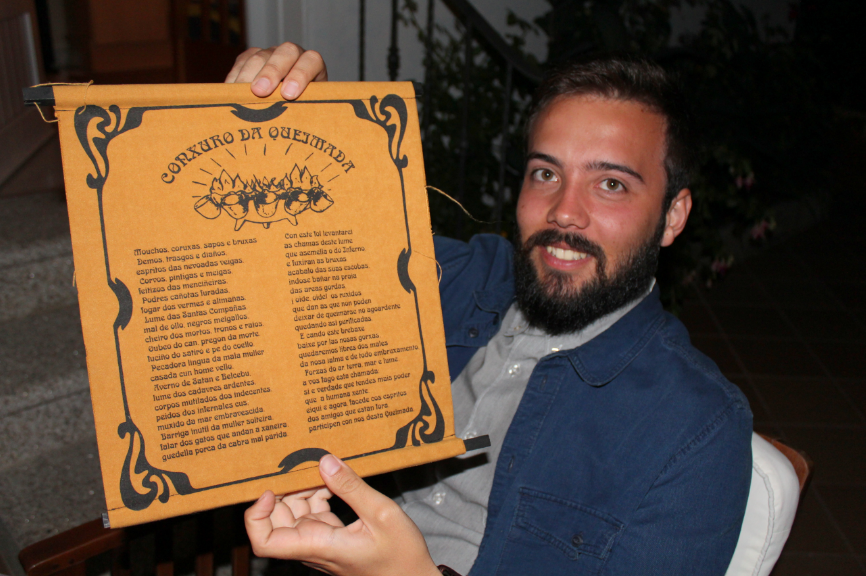 Useless belly of the unmarried woman,
speech of the cats in heat,
dirty turf of the wicked born goat.
With this bellows I will pump
the flames of this fire
which looks like that from Hell,
and witches will flee,
straddling their brooms,
going to bathe in the beach
of the thick sands.

Hear! Hear the roars
of those that cannot
stop burning in the firewater,
becoming so purified.
And when this beverage
goes down our throats,
we will get free of the evil
of our soul and of any charm.

Forces of air, earth, sea and fire,
to you I make this call:
if it’s true that you have more power
than people,
here and now, make the spirits
of the friends who are outside,
take part with us in this Queimada.

When the spell was finally over, we toasted and drank the sweet and fragrant yet throat scorching Queimada. Just a few glasses go a long way!