Picasso said that ‘sculpture is the art of the intelligence‘. I do not know exactly what he meant when he spoke these words, but sculpture certainly titillates my mind in a way that traditional canvas based art does not. The people of Tbilisi must also feel the same, as this incredible city is filled with sculpture. Bronze people, alive, but in a different way, dancing out of walls or going about their daily chores. I’d like to think that while the city sleeps, the statues wake up and have their own life, so real do they feel.

I wanted to find out more about the faces in the bronze, the story behind the art: I needed to dig up some intelligence.

The Sculpture of the Falcon & the Pheasant, Sulphur Baths

This sculpture of a falcon holding a pheasant in its talons is a nod to the legend of how Tbilisi was founded as a city. King Vakhtang was out hunting when his falcon caught a pheasant, however in the ensuing fight, both birds fell into a hot spring and died due to the heat of the water. King Vakhtang was so impressed by the water that he built a city on the location. The name Tbilisi means ‘the warm place’. 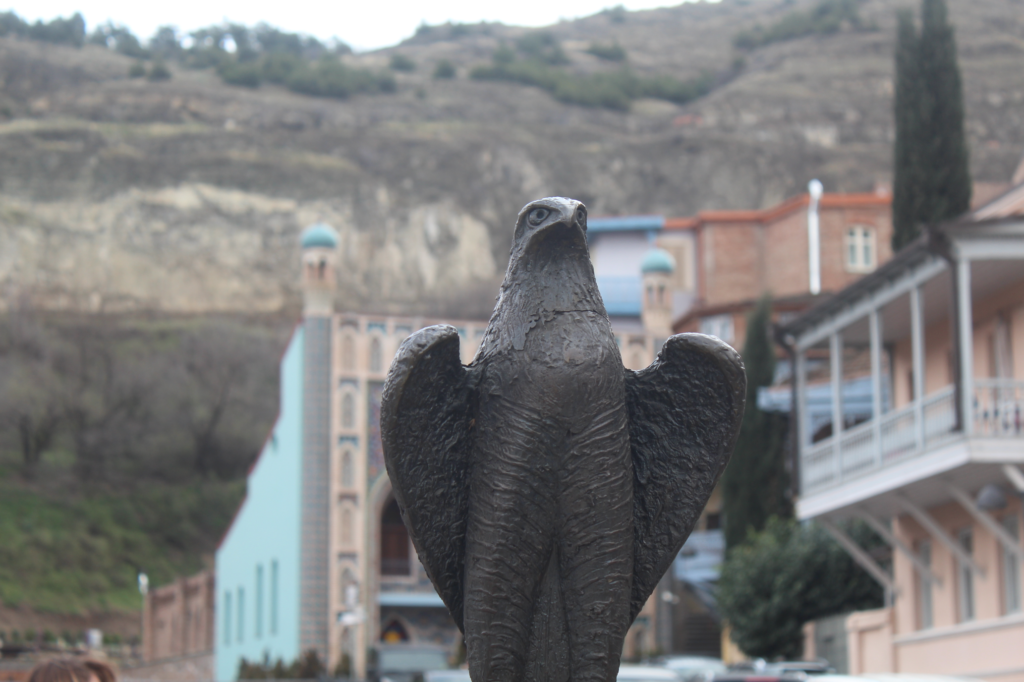 If you walk down Baratashvili Street you’ll encounter this lamplighter, by Irakli Tsuladze, up on his ladder, tending to the city so that no one walks in the dark. It’s a beautiful ode to a forgotten profession. 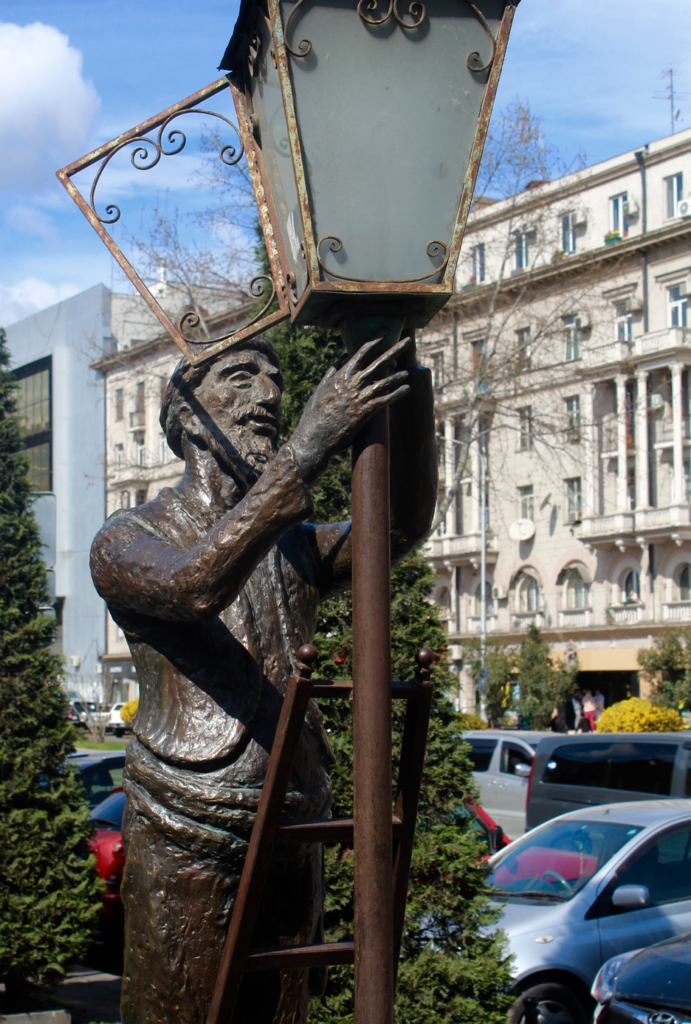 Sergey Paradzhanov was a Soviet film director and artist who invented his own cinematic style, which was totally out of step with the guiding principles of socialist realism (the only sanctioned art style in the Soviet Union). This, combined with his controversial lifestyle and behaviour, led Soviet authorities to repeatedly persecute and imprison him, and suppress his films. I loved this statue of him leaping out of a wall, his arms and jacket raised as if he felt he could fly. I feel like the sculptor has really captured the jovial nature and imagination of this true artist. 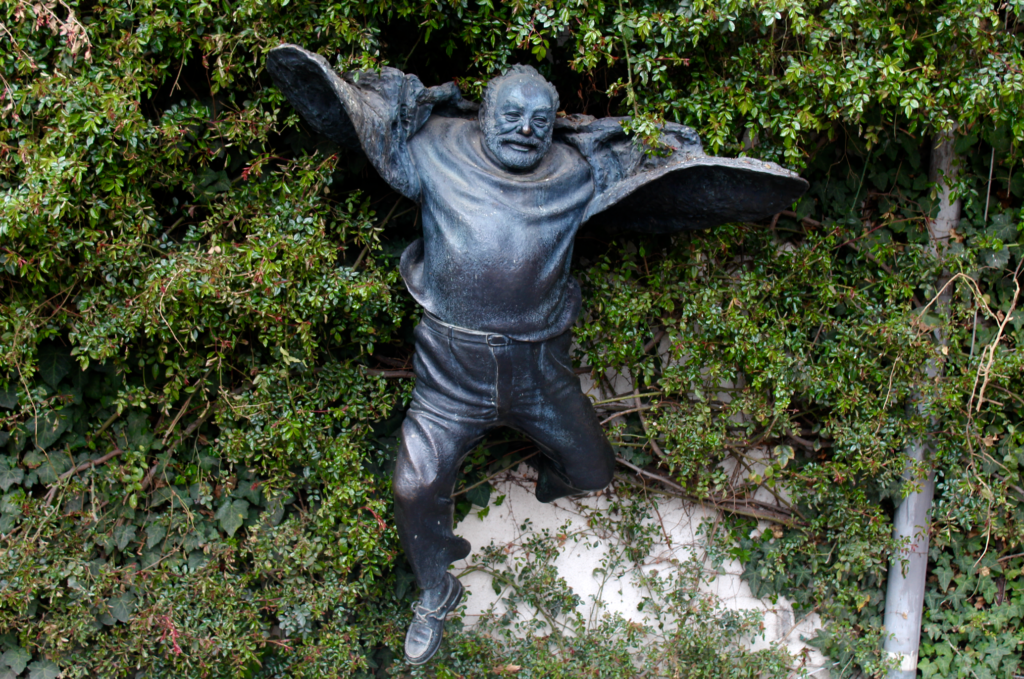 Shota Kavlashvili was one of the most prolific Georgian architects of the Soviet period. He also served as Chief Architect of Tbilisi (1970-1974; 1980-1990), overseeing the preservation of Old Tbilisi and the creation of the country’s first urban historic district in 1975. In recognition of his efforts, the city renamed a street in Old Tbilisi after Kavlashvili, and his statue (by sculptor Tengiz Kikalishvili) was added outside the old city gates on Baratashvili Street. I believe the architect would be been happy with his likeness, for while it remains true to his appearance, it does so in a truly unconventional manner. 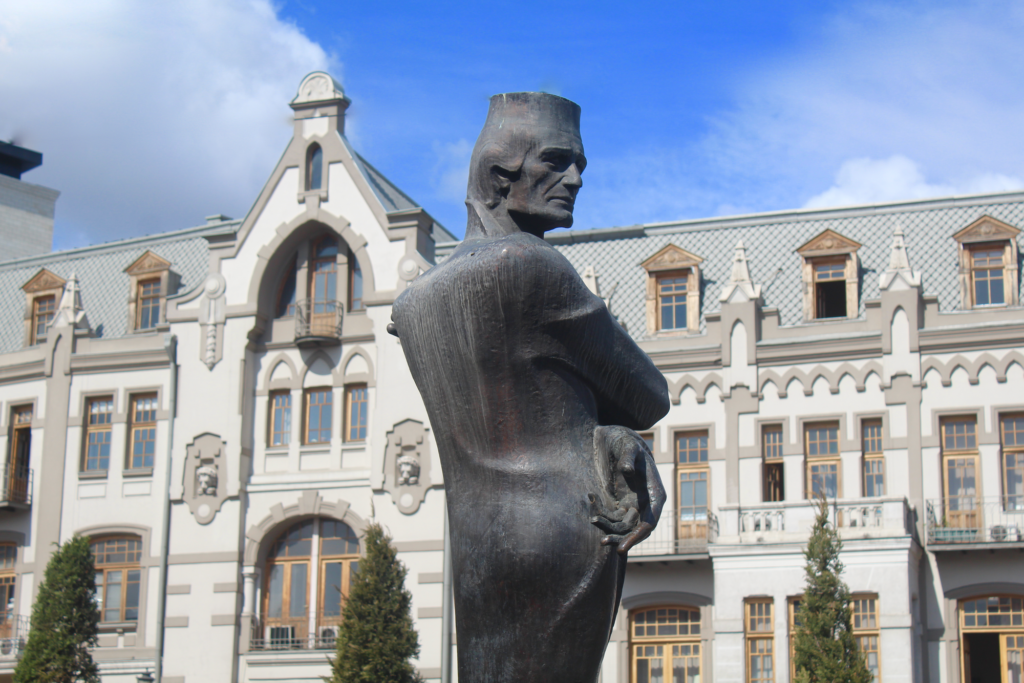 I don’t know the story behind this saxophone player, but like everyone in Tbilisi, he was determined to charm and entertain us. 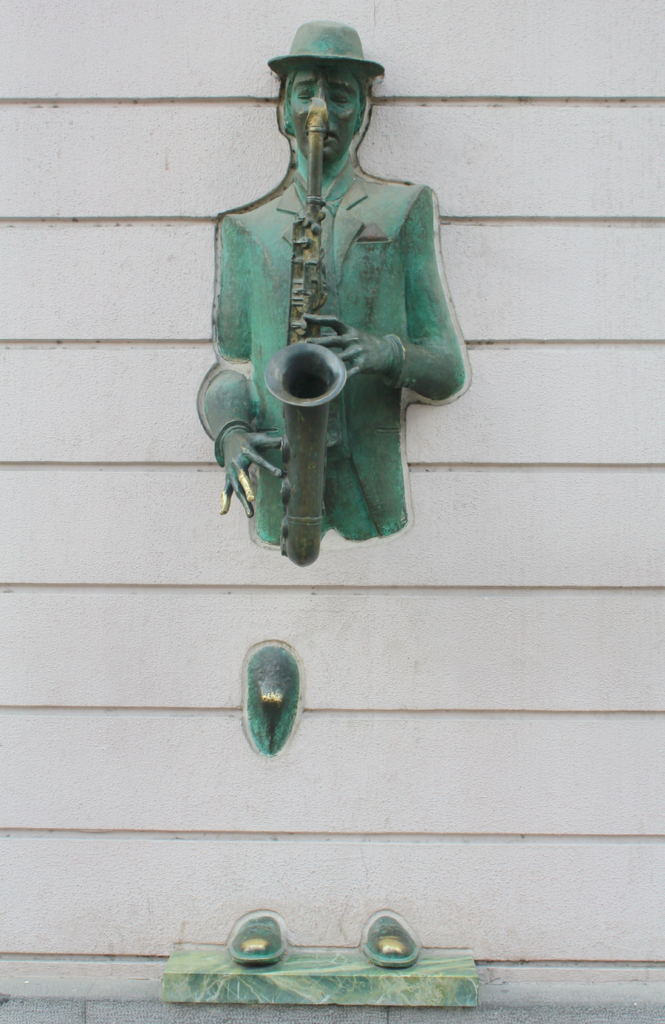 The Tamada is the official toastmaker at a Georgian wedding or special event.

Tamada traditionally ought to be eloquent, intelligent, smart, sharp−witted and quick−thinking, with a good sense of humor since very often some of the guests might try to compete with him on the toast making. At the Georgian table, a tamada is considered to help bridge the gap between past, present and future, toasting ancestors and descendants as well as the other guests at the table. A toast can be proposed only by a tamada; the rest are to develop the idea. Some toasts take a traditional form; for example, for some toasts all men have to stand up and drink wine in silence. In many cases, however, the guests vie to say something more original and emotional than the previous speaker, and the whole process grows into a sort of oratory contest.

The Tamada holds a horn filled with wine in his hand, raised, ready for his toast. As you can see from the photo, it is believed to be good luck to rub his horn, his arm or to sit in his lap! Since we were in Georgia for our dear friend’s wedding, this statue felt even more pertinent to us, welcoming us to the country with the best wine and the best celebrations around. 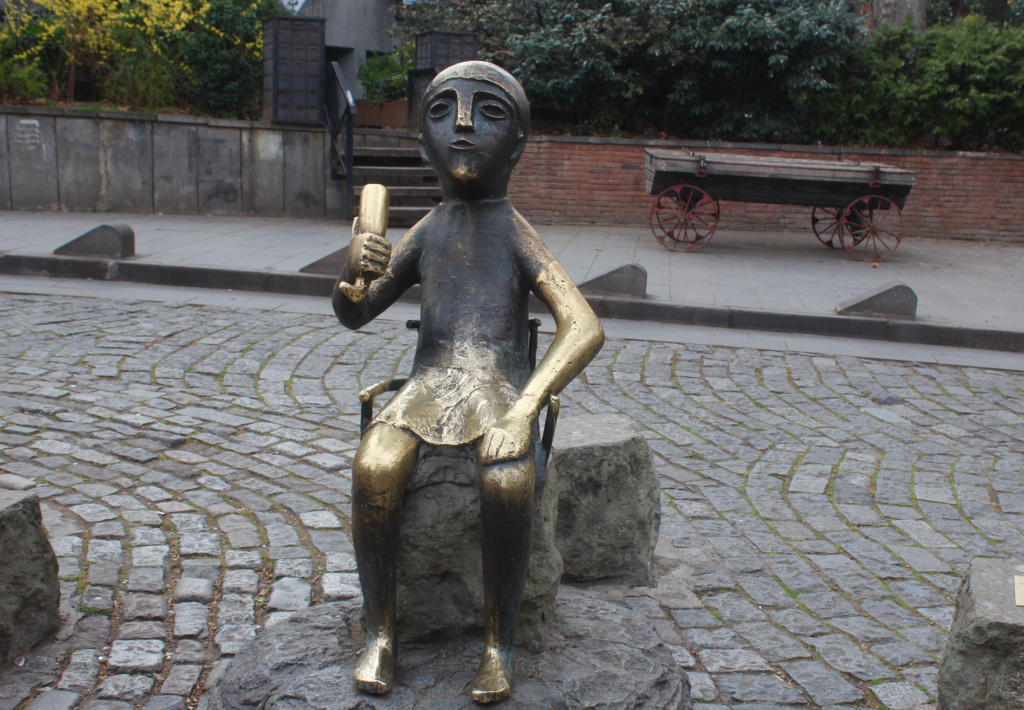 The Janitor statue is based on the painting of a janitor by Niko Pirosmani (1862 – 1918), one of the most famous artists in Georgia, he was a naïve painter who sadly only received recognition posthumously.

I love both the sculpture and the painting, I love the fact that the artist saw something extraordinary in the face of what others may deem ‘ordinary’ people. Everyone has their story, and Pirosmani wove it into the paint on his canvas, and then a sculptor solidified it in bronze.

If you’re looking for small and inexpensive souvenirs from Georgia, a start up sock company, famous for making socks adorned with Georgian Khinkali (dumplings), also produce socks with this janitor on them too. 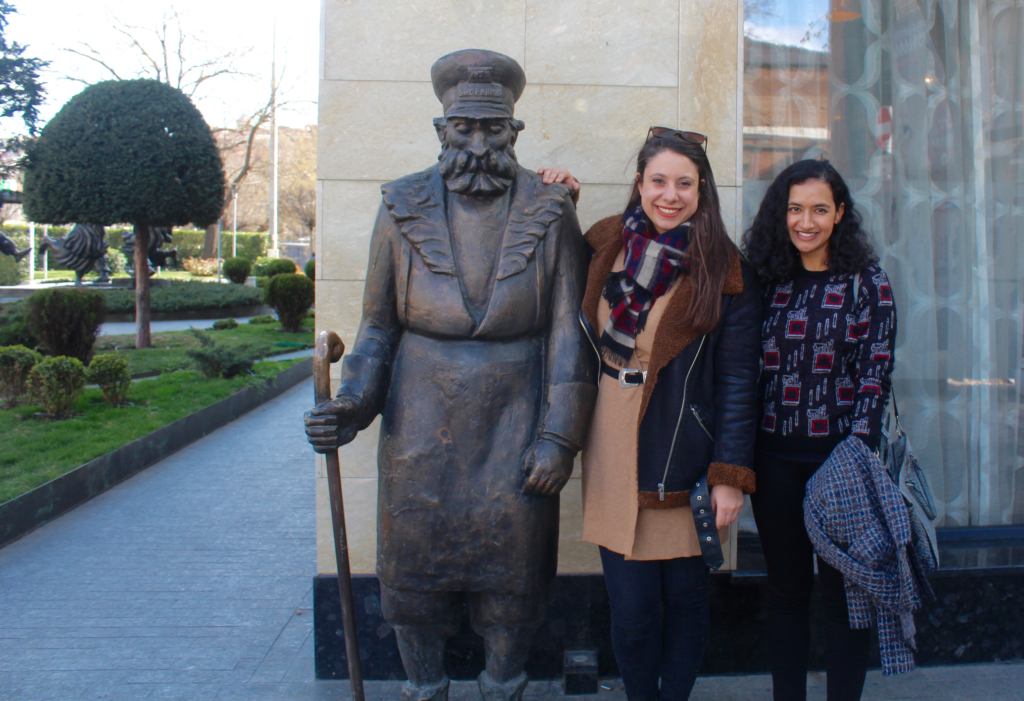 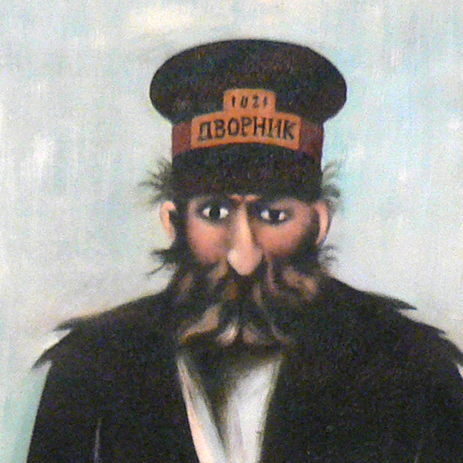 The Mail Carrier and His Friend

This statue depicts a mail carrier stopping for a few minutes to catch up with his old friend (before I so rudely interrupted them and sat in the middle!)

My trip to Tbilisi was a reunion of a group of friends who all attended university together but then moved across the world as life, and work pulled us away. This bronze artwork struck a particular chord as a result, an everlasting symbol of friendship and the important of human interaction and connections. 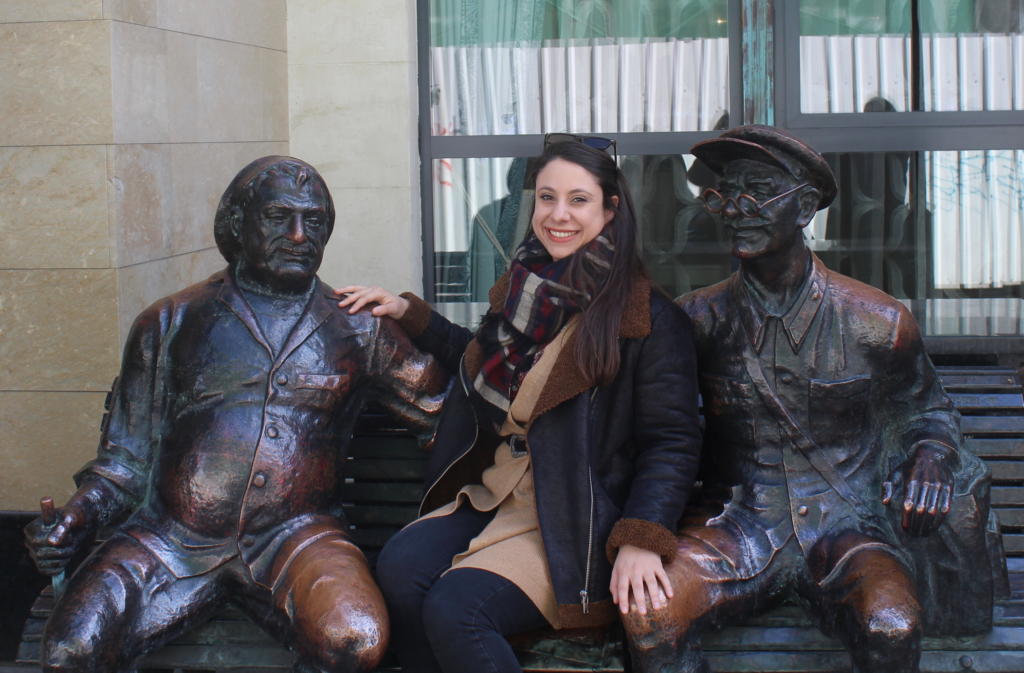 You can’t help but be totally captivated by this incredible statue, she is everything that I value. A strong powerful ‘mother’, keeping watch over her city and country, she hold in her left hand a bowl of wine to greet those who come as friends, and in her right hand, she holds a sword for those who come as enemies. At 20m tall in shimmering aluminium, she represents the spirit of the Georgian people, and I genuinely can’t imagine a better representation. Georgians are the kindest and most hospitable people I know, but as a country that has been invaded over and over (and over) again due to its strategic location, it is right and proper that she defend her nation. The statue was erected on the hill in 1958, when Tbilisi celebrated its 1500th anniversary and was designed by Elguja Amashukeli.

Her silent and strong omnipresence is one of the most powerful and beautiful statements of art I have seen. As a foreigner, a stranger to this land, she makes me want to be like her, be Georgian. 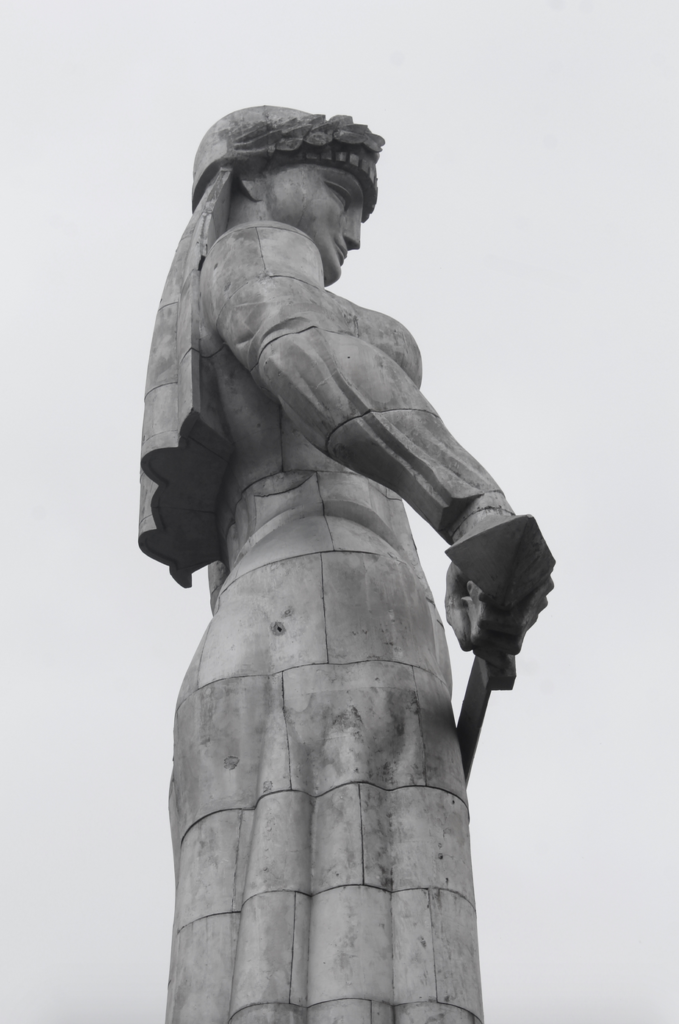 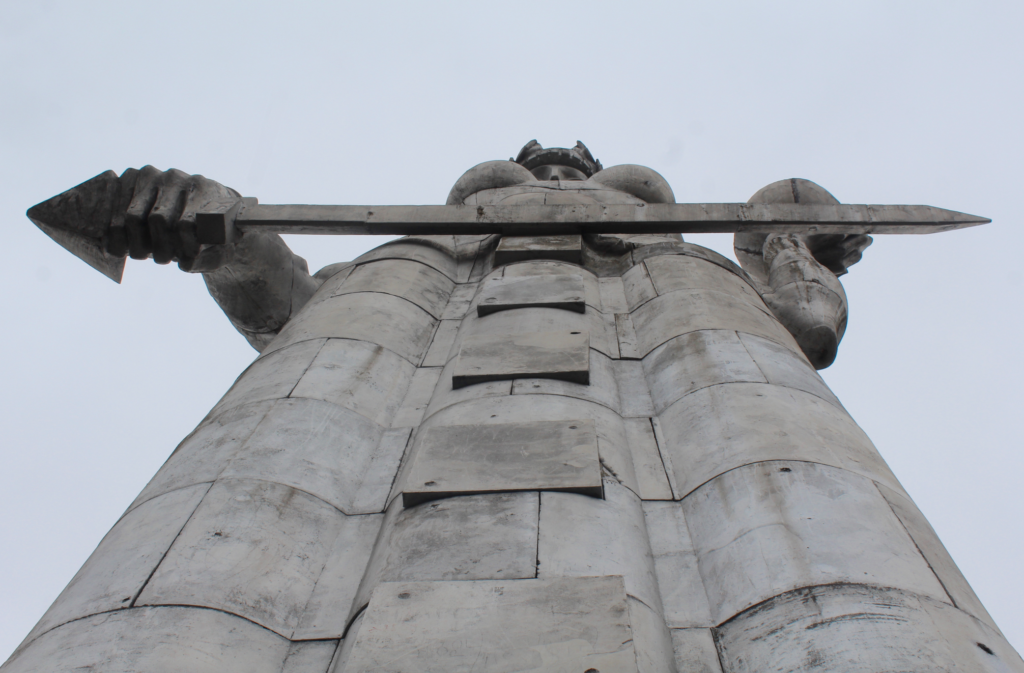 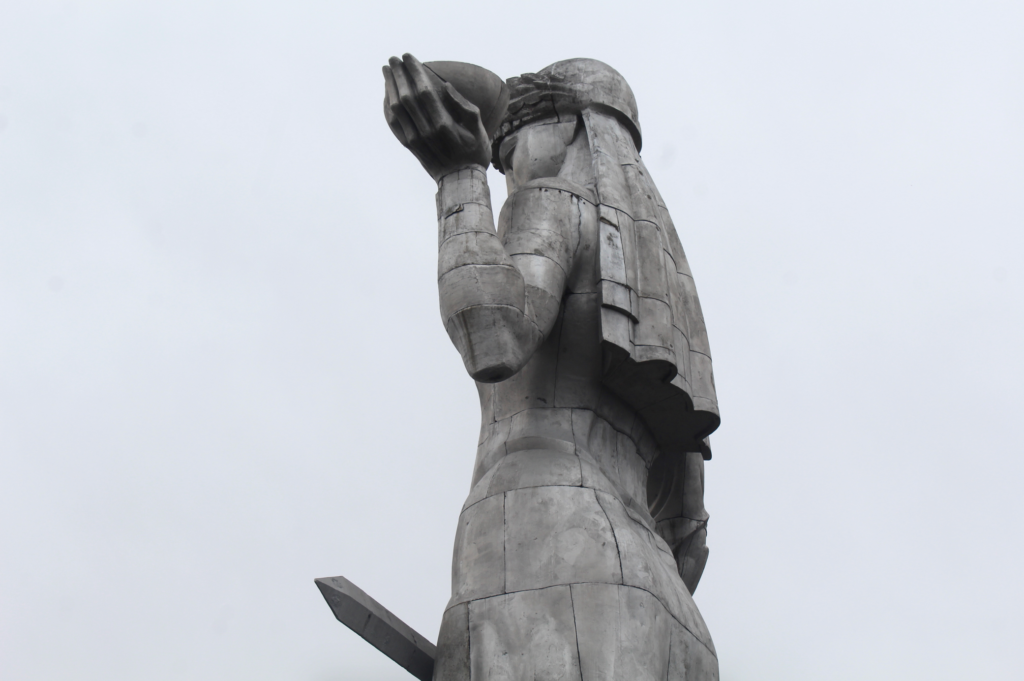 Vakhtang I Gorgasali was a King of Iberia (Kartli in Eastern Georgia) in the second half of the 5th and first quarter of the 6th Century. It is said his name comes from Iranian meaning wolf-bodied and can be attributed to the wolf cult of people in Georgia. He was the hunter whose falcon perished in the hot springs of Tbilisi and so founded this ancient city. His stories have mixed reality with legends to make him the greatest warrior king of all time. Indeed our guide commented that he was so tall and so strong he could carry a horse and all its armour up a mountain. We decided to believe he must have had a penchant for shetland ponies in order for that the be true! He is one of the most popular figures in Georgian history and was canonized by the Georgian Orthodox Church as The Holy and Right-Believing King Vakhtang.

When I first saw this statue of him, I immediately fell in love. I absolutely love the stylised horse with it’s powerful stance and the sword that hangs so rigidly straight. I would have loved to be a terrible tourist and climb up into the saddle with Vakhtang, just for a taste of the power of sitting astride such a huge beast behind such a great figure.

His statue directly faces that of Mother Georgia up on the hill above him. I like to think his hand is raised up to her, as she looks down on him. 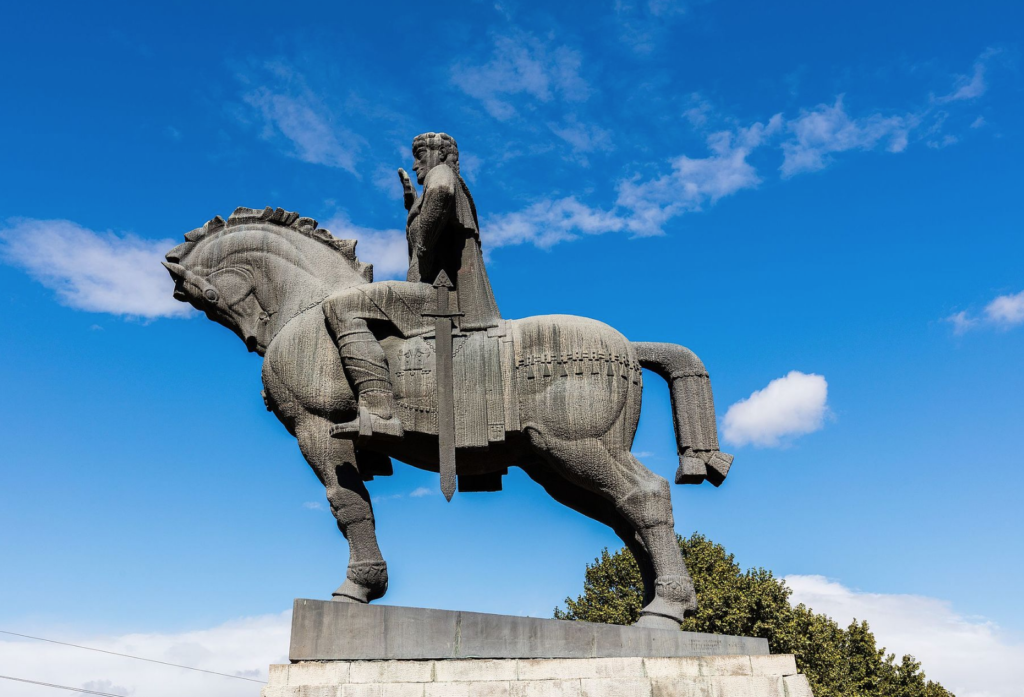 The Freedom Monument is a gleaming golden statue of St. George, spearing a dragon that sits high above the city, among the clouds at 35m high. It is dedicated to the freedom and independence of the Georgian nation and was a gift by the sculptor Zurab Tsereteli. It’s funny, when more insular English people think of St George, they think of him representing their little island nation and yet countries across the world take a knee before this Patron Saint including Georgia, Ethiopia, areas of Spain, Kerala in India, the list goes on. It makes me happy to know that we’re all one people, across the world. 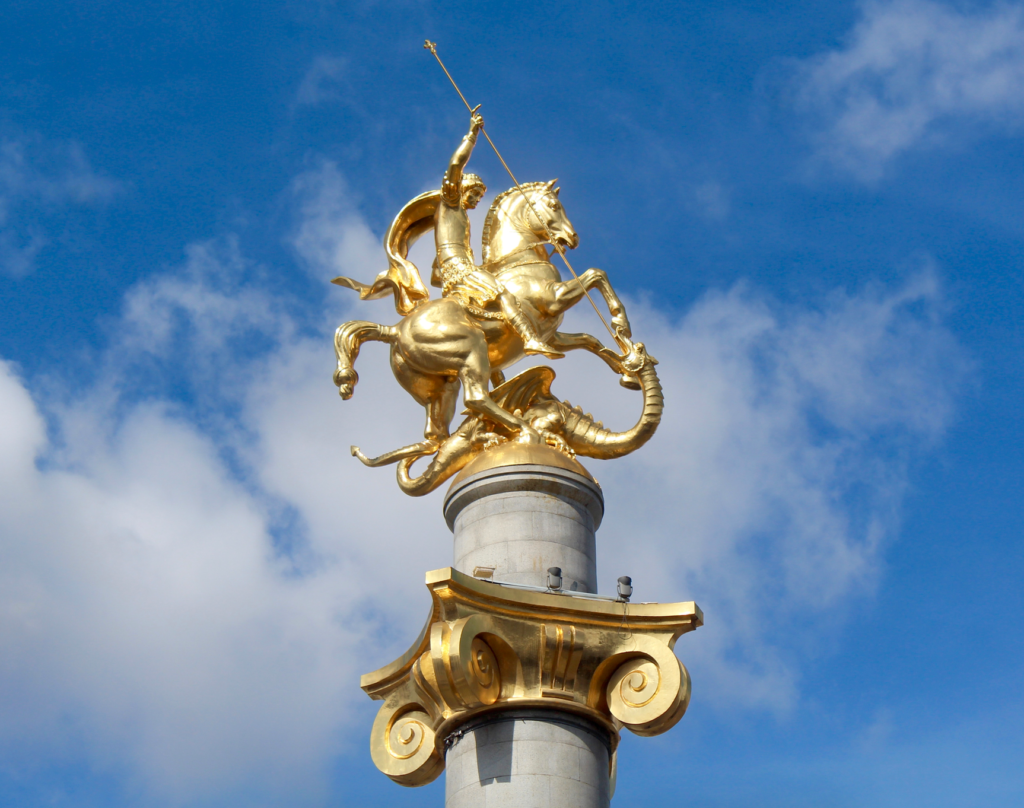 The streets of Georgia are lined with curious statues and fascinating stories. Sadly this is but just a taste of what you can see, however I think that is better for now you can go and find your own, learn their origin story, and report back to me! The following statue is one that I spotted but haven’t been able to find anything out about her. If you happen to be able to shed some light on this golden ram woman carrying what appeared to be an olive branch, please do comment below and let me know! 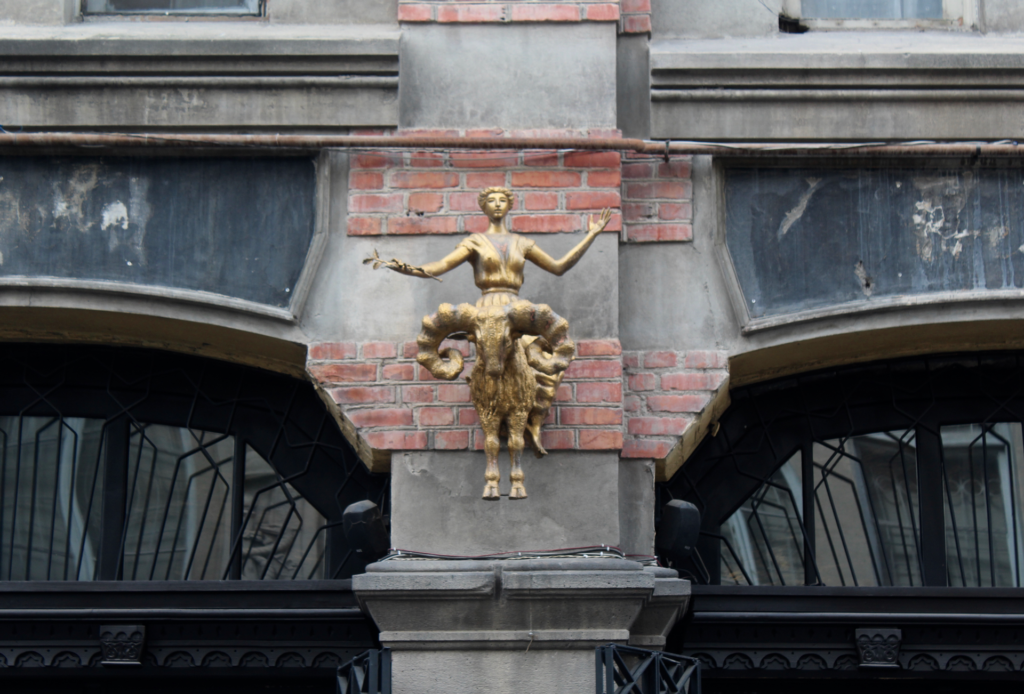