Have you ever wanted to skip through a rainbow, visit the gleaming rooms of a fairy dwelling or see a real pot of gold? Then this is the place for you. The National Leprechaun Museum in Dublin is much more than its name suggests, this unassuming museum is an ode to the rich and colourful story telling traditions of the little Emerald Isle. The Gaelic word for story teller – seanchaí – actually translates as the ‘keeper of old thoughts’ and it’s these old thoughts that will delight and entertain you on your tour.

As you travel from room to room with your storyteller guide, you’ll learn about the magical people of Ireland and their many dark tales. The Leprechaun, with its mischievous personality was considered to be the light in those dark stories, the rainbow in the rain, and though the museum is named after these colourful characters, you’ll hear about all sorts of your journey. 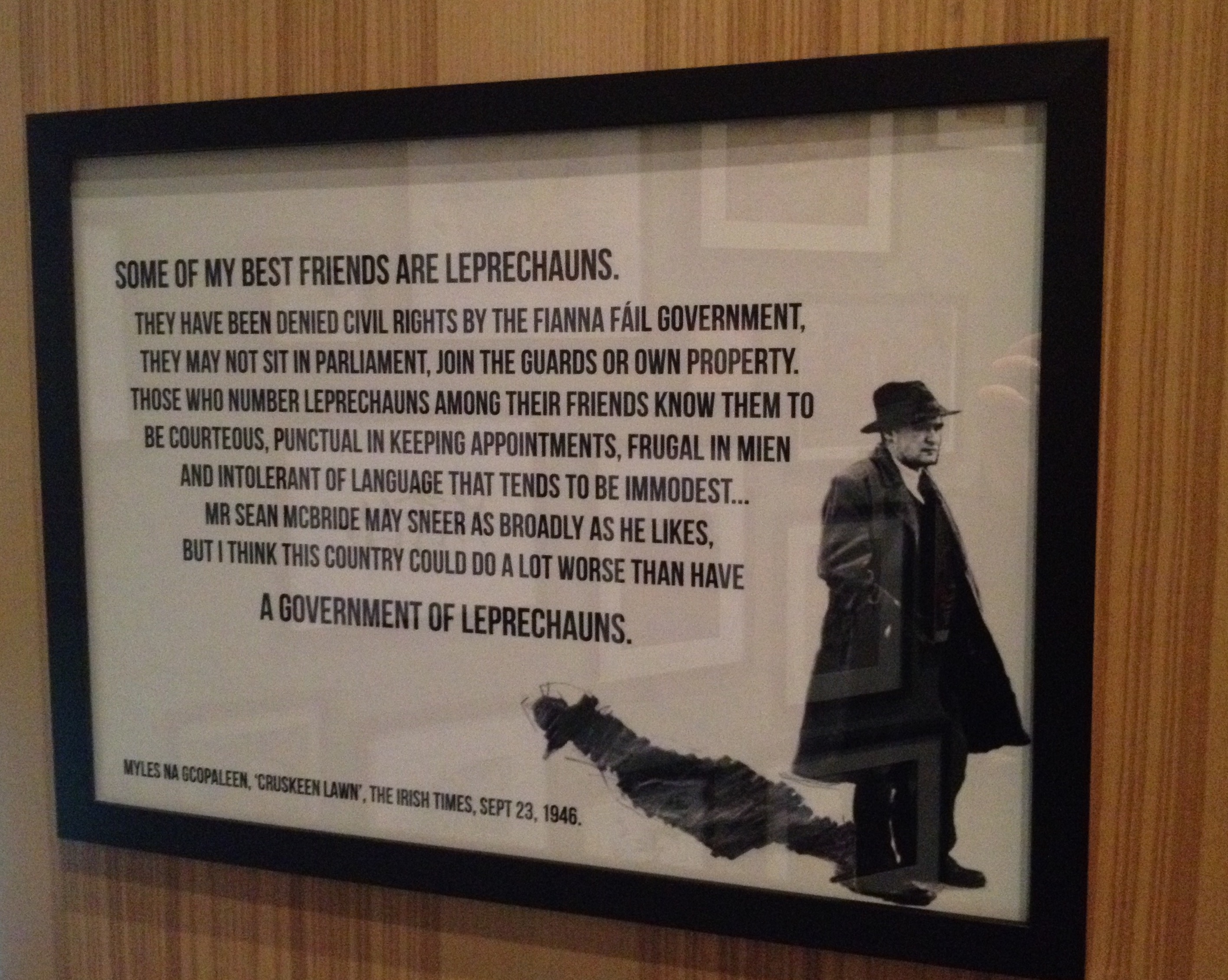 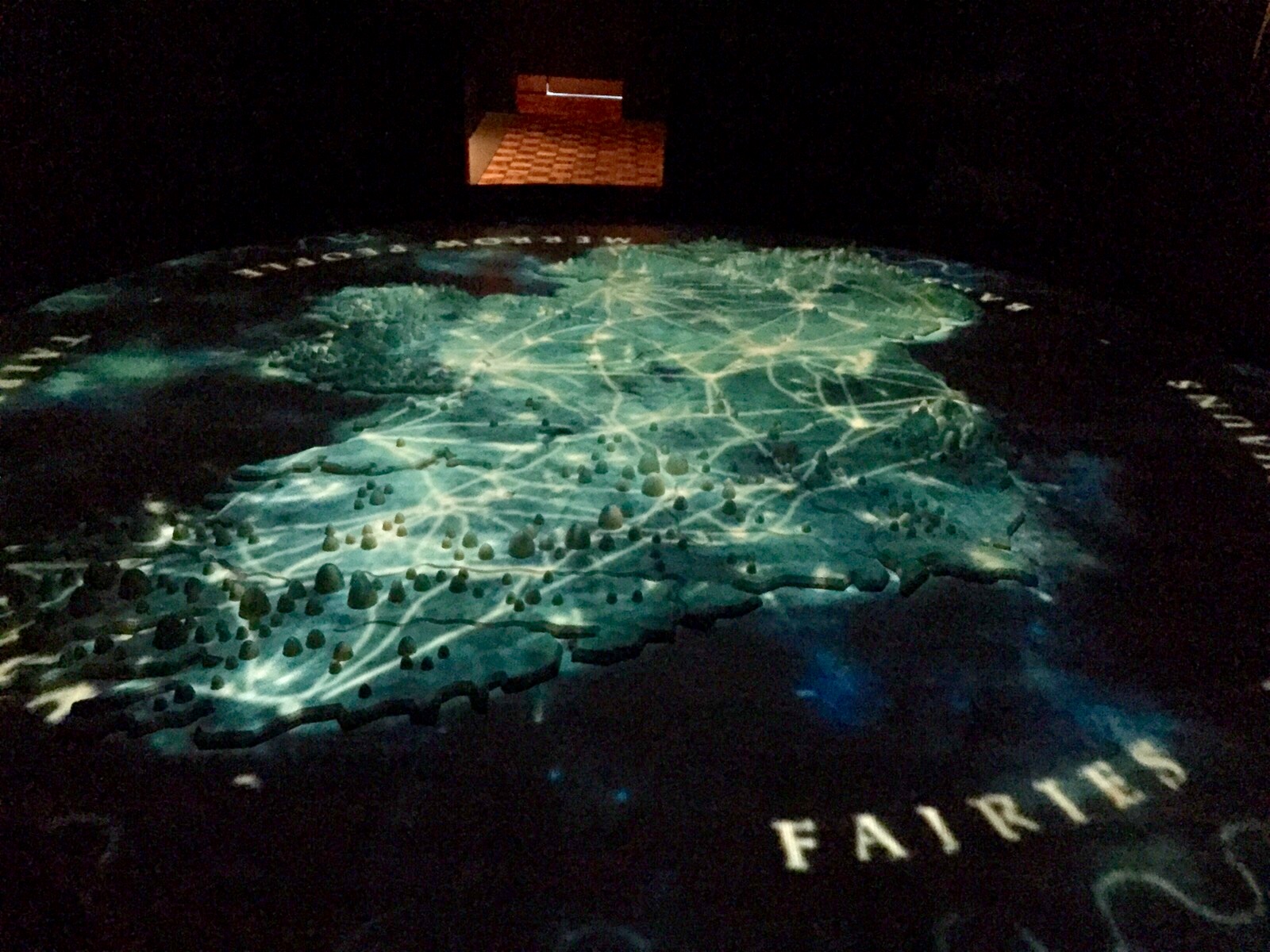 The tour begins with a walk down a bizarre dark, circular tunnel that grows as you walk down it, making you feel like you’re shrinking! At the other end you’re spat out into the home of a giant, with enormous furniture scattered around you. We spent a few fun filled minutes trying to jump up to the huge armchairs and stools before continuing on our journey through the hearth.

We found ourselves in a tunnel flickering with dappled turquoise light lapping across the ceiling which was made of curious shaped columns. I looked closer and realised that they were the same shape as the giants causeway and that we were walking beneath it! At the other end was a simple little cottage, a typical Irish family home. Spartan and bereft of much to entertain other than by the tales woven by those soft lilting voices: our story teller sat us all down and told us beautiful tales of cheeky leprechauns and red socks (if I’ve piqued your interest, you’ll have to go visit the museum to hear the rest!)

We ran through a rainbow and found the mythical pot of gold. I never knew that the reason the leprechauns have gold is that they are paid in gold for their work! The faery people of Ireland love to dance apparently, and dance so long every night that they wear out the soles on their shoes, so the leprechauns make them new shoes, for which they are paid in gold! And here we are, trying to chance upon their hard earned wages. 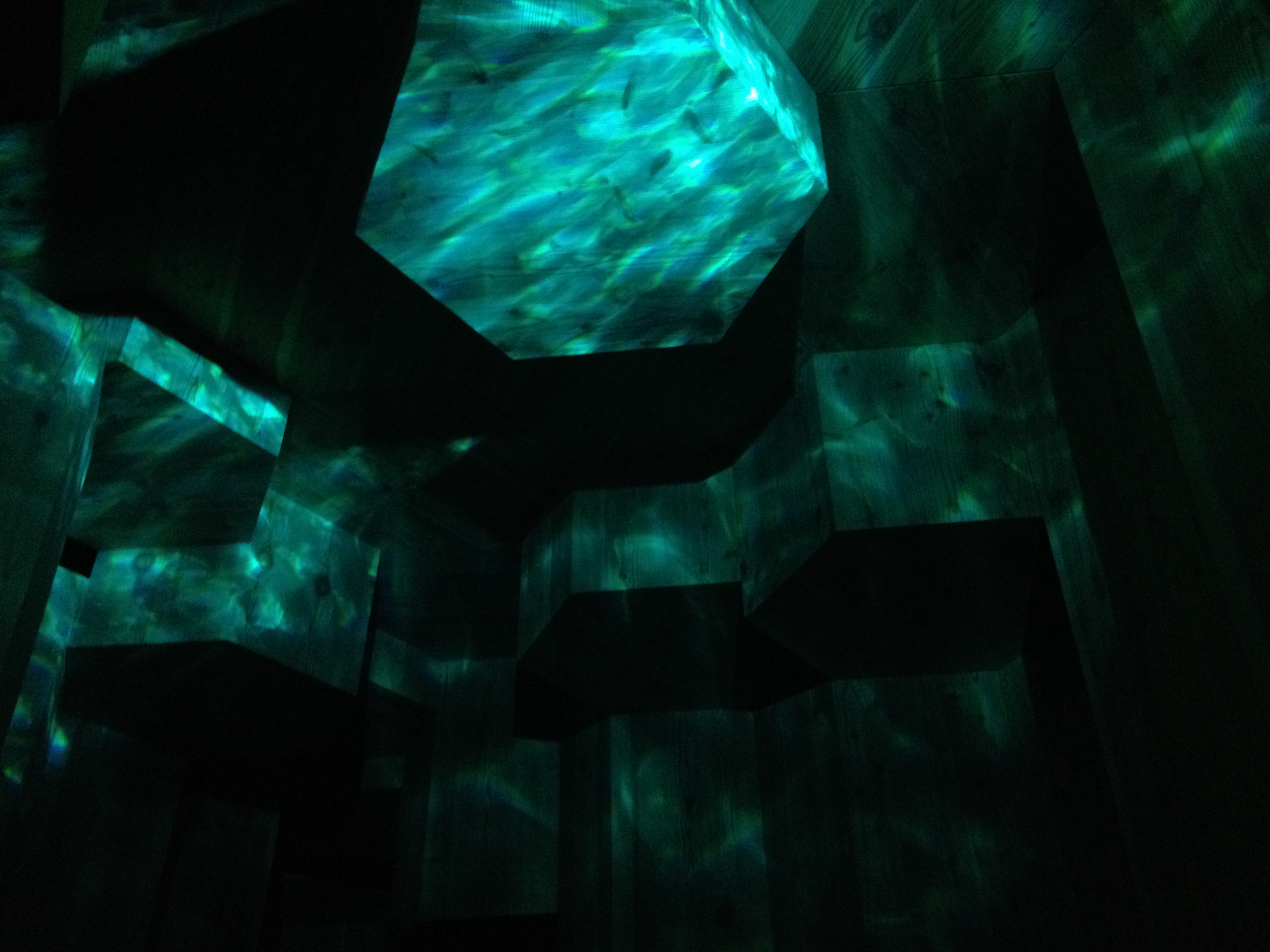 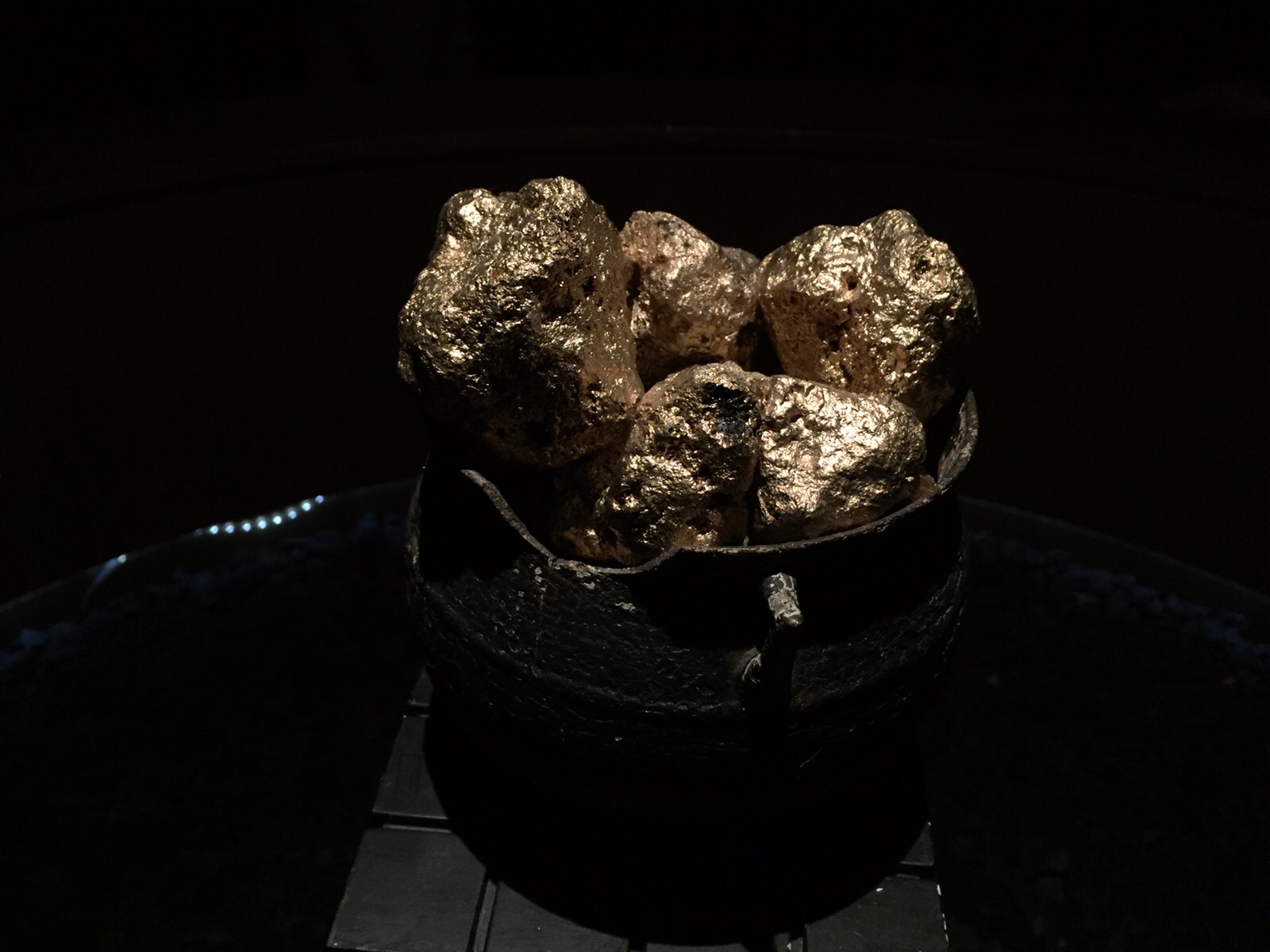 As we sat inside the elegantly gleaming room within a faery hill, we found out why it was that such beautiful and magical creatures lived below the ground.

Many years ago Ireland was lived in by the Tuath Dé – the magical people of Ireland who came from the land of eternal youth. Human settlers (Milesians from Iberia) sailed across the sea looking for new lands and happened upon Ireland, whereby a war broke out, a war that the Gaels won. Claiming to be decent people, the Milesians proclaimed that they would divide Ireland in half between them and the Tuath Dé, but they took the upper part of Ireland, from the ground to the sky for themselves and banished the Tuath Dé to beneath the earth. Living deep underground in their fairy hills, the Tuath Dé grew smaller and weaker in the darkness with no light and fresh air. As a result of such history, the Tuath Dé (who became known as the Aos Sí) had a strained co-existence with humans, the latter never referring to them by name and calling only them the ‘good neighbours’ or the ‘fair folk’ for fear of angering or offending them.

The Aos Sí grew smaller and weaker, their children grey and sickly, and fearing their race would die out after being forced to live unnaturally underground, they came up with a solution. They stole the healthy children of the humans and married them to their own sickly children so that in turn their children would have the magic and the beauty of the Aos Sí and the health and strength of the humans. In exchange they would leave behind changelings – either an old dying faery or faery infant too ill to survive. The humans would have to care for the changeling for fear of offending the faery, and in exchange it was understood (by the faeries at least) that the stolen human child would live a much superior life of magic.

‘Come away, O human child!
To the waters and the wild
With a faery, hand in hand,
For the world’s more full of weeping than you can understand.’ 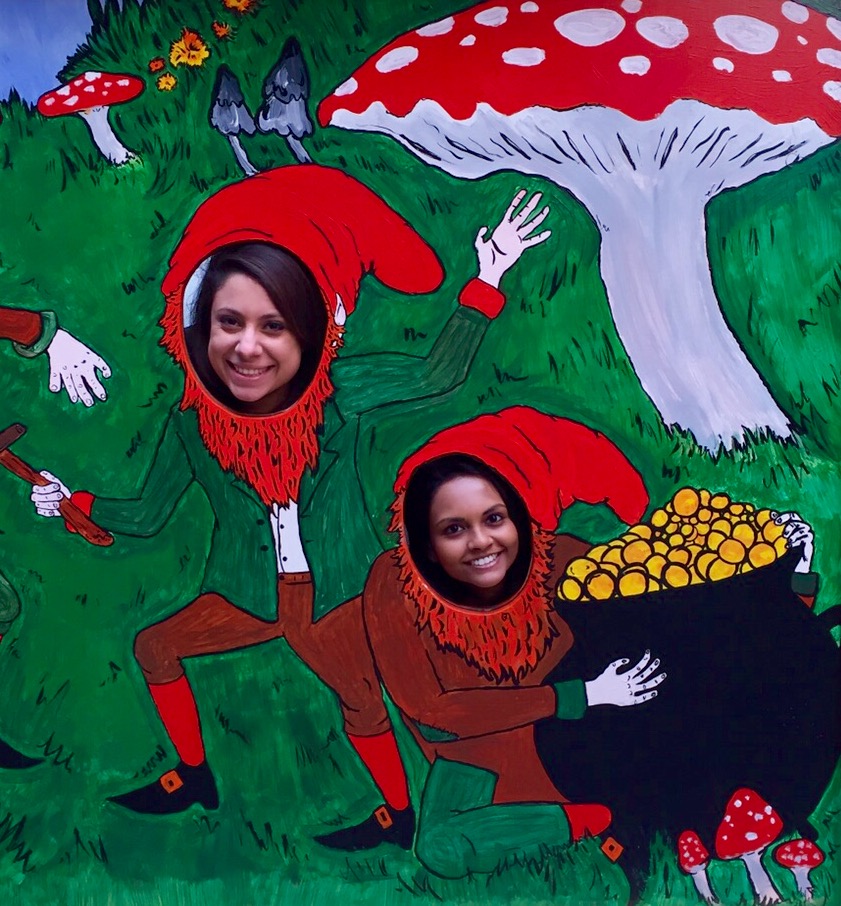 The Irish came up with ways to protect themselves from the faeries though for faeries have their weaknesses. The most famous of which (made especially famous by the show True Blood) is that faeries are burnt by iron as they are white blooded creatures (with no iron in their blood). The humans would keep iron in their pockets and nail old bits of iron to their doors – such as old horse shoes, which is how the horse shoe came to be a lucky symbol! They would also sprinkle dirty water around their houses as faeries do not like dirt. Finally, until the age of 5, they would dress their sons as girls, for the faeries only wanted the male children to take away.

These are just some of the many fascinating stories and legends we learnt while in the National Leprechaun Museum. Though it’s called a ‘Museum’, I’d say it’s more like stepping into the other-world itself – so magical is the experience! I would strongly recommend stopping by while in Dublin to find out more about this country, filled with spinners of tales and weavers of stories.