Once upon a time, after the gods shook the ground, an ancient city was built atop a hill, among the clouds. 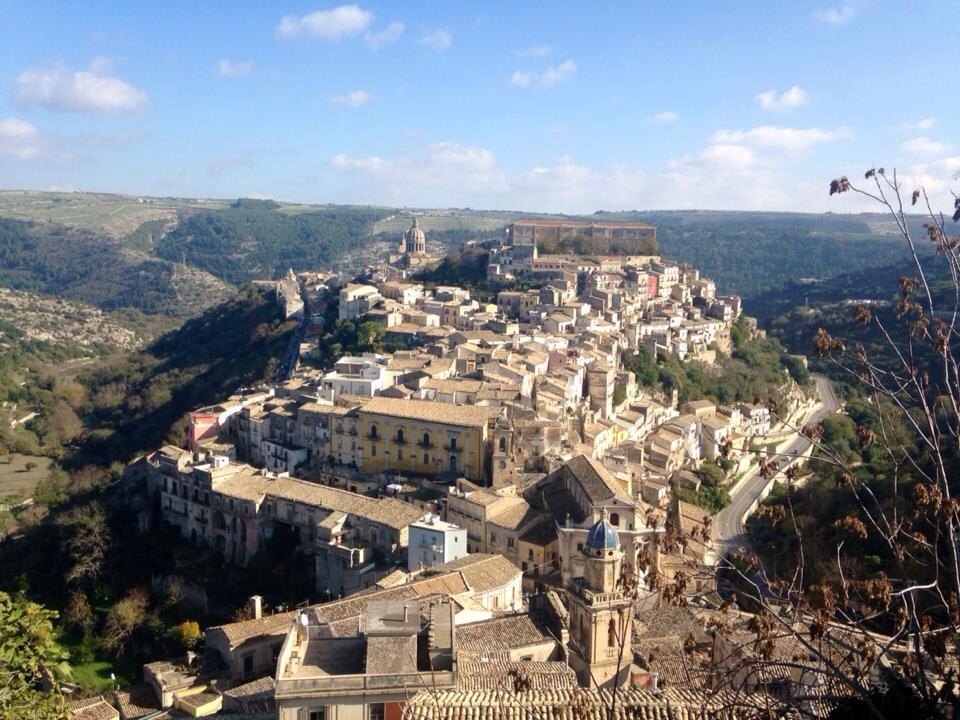 Within this city, along a cobbled street, around a corner, down a side alleyway and through a large pair of wooden doors lies the Palazzo de Noris.

Everything, from the faded pale pink doors, gilded with peeling designs, to the beautiful old floor tiles in subtle shades of grey, oozes elegance and class. 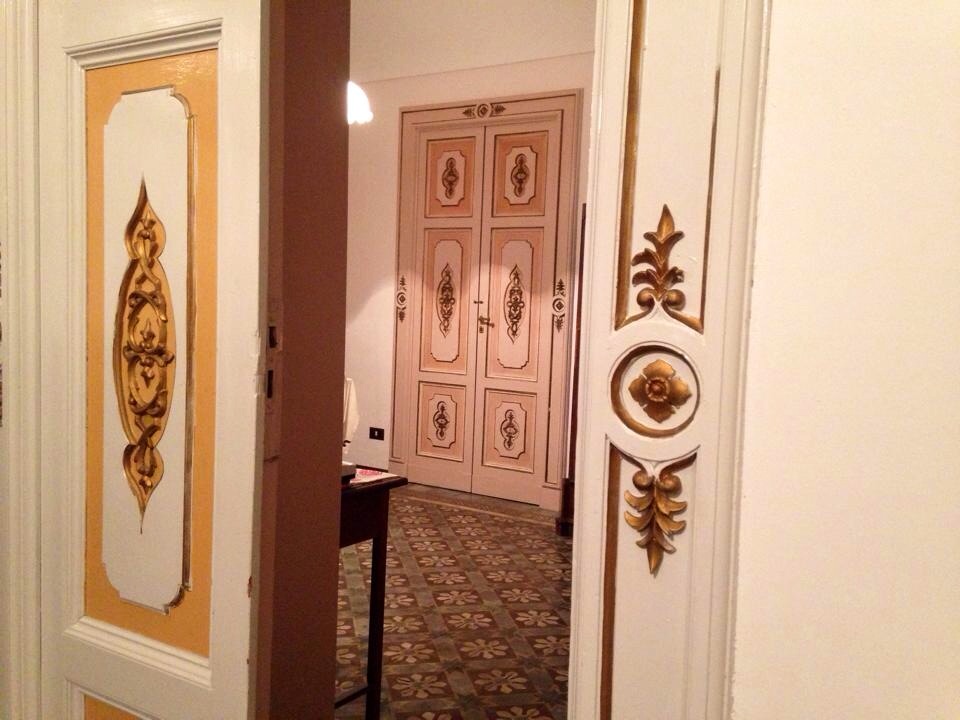 I have never, in my life, been in a building as pretty as this old 18th century palace, and to have been able to call it my home for a few days was a pleasure I’ll never forget.

Ester is the loveliest host you could ever dream of having. A native ‘Ragusana’, she has spent a lot of her time travelling the world, living in South America for 10 years before moving to the mountains in the north of Italy, and then finally returning home. 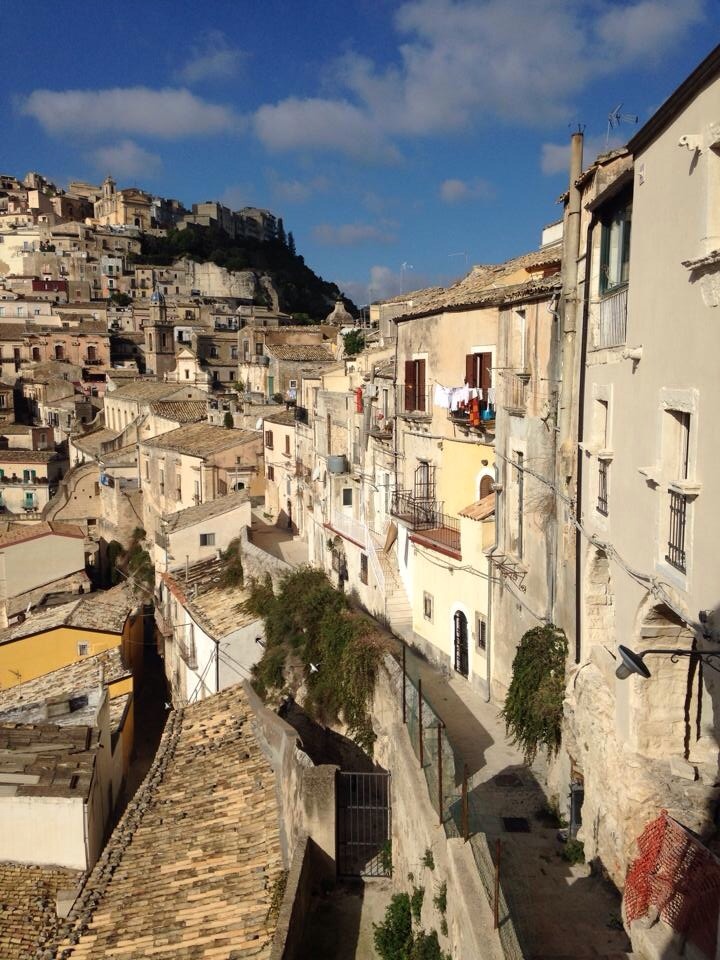 View from the bedroom window

The palace is now divided between Ester and an older gentleman who works as a film location scout and was coincidentally the man who picked the locations for the much beloved show ‘Inspector Montalbano’.

Every morning we were served a royal breakfast of fresh yoghurt, Sicilian honey, toast, fruit, juice and proper coffee. 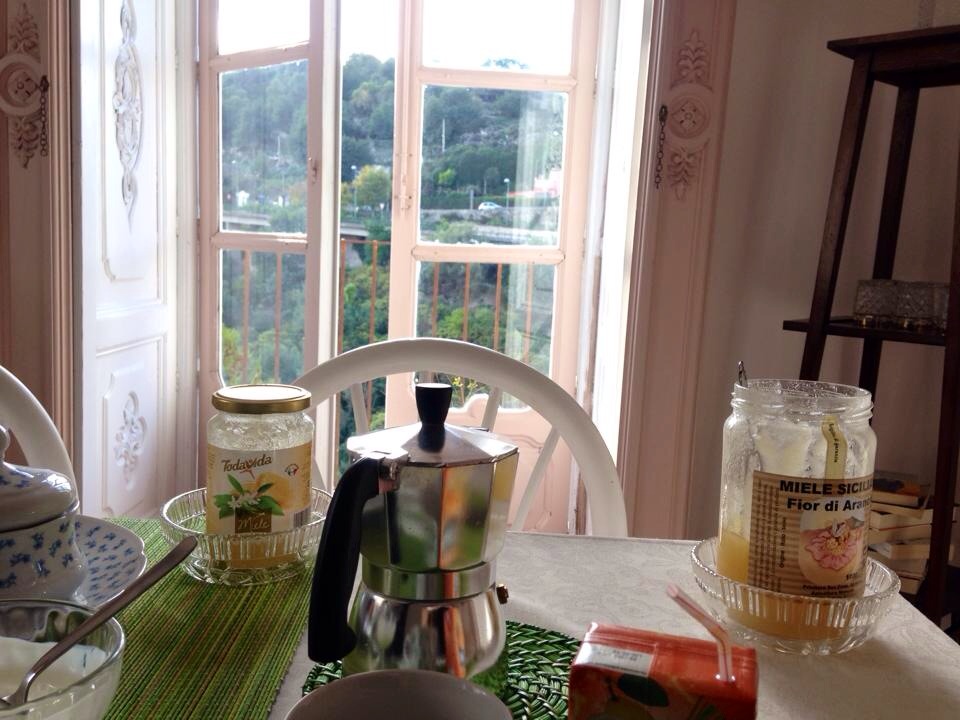 Ester also brought us a number of local delicacies to try including caciocavallo (a soft, local cheese), biscuits filled with nuts, a pannetone with lemon curd and finally, a cassata Siciliana. 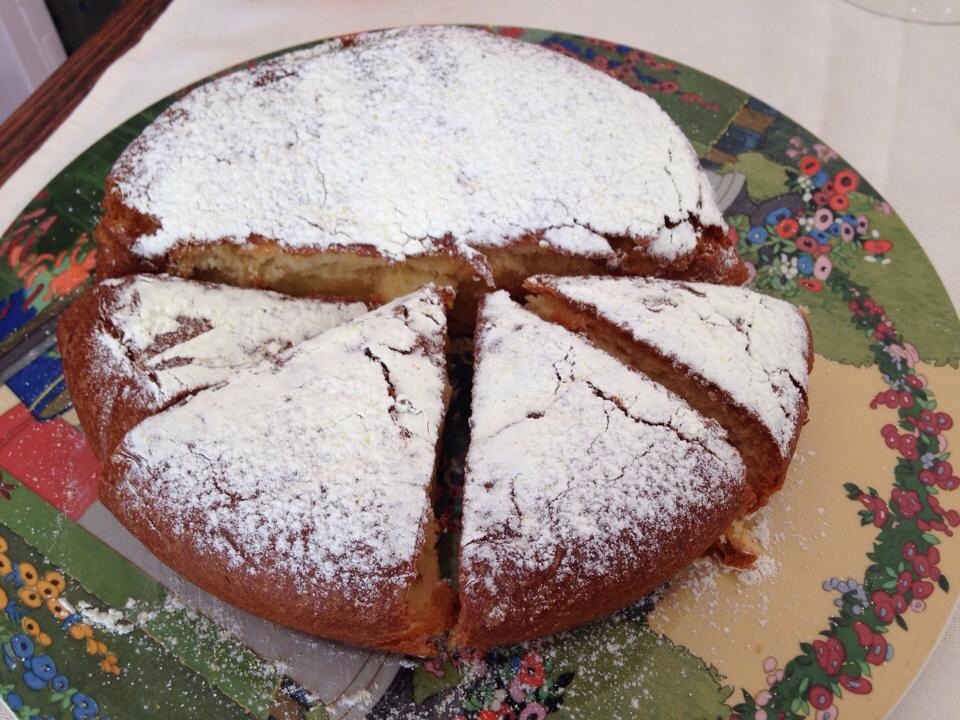 Cassata is a traditional Sicilian sponge cake made with fresh ricotta, candied fruit and marzipan. It’s always pretty delicious (and pretty and delicious!), but the one she bought us was the best cassata I have ever had: light, frothy textures and delicate sweet flavours in hues of pink and white. 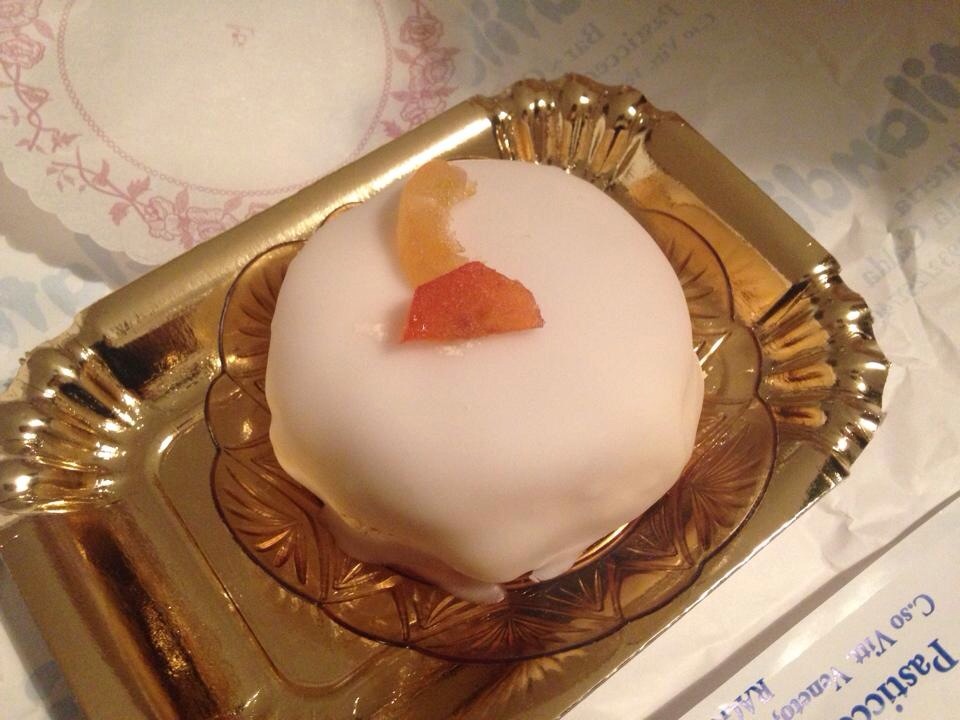 We were so full after eating breakfast every day, we could barely cope with lunch! 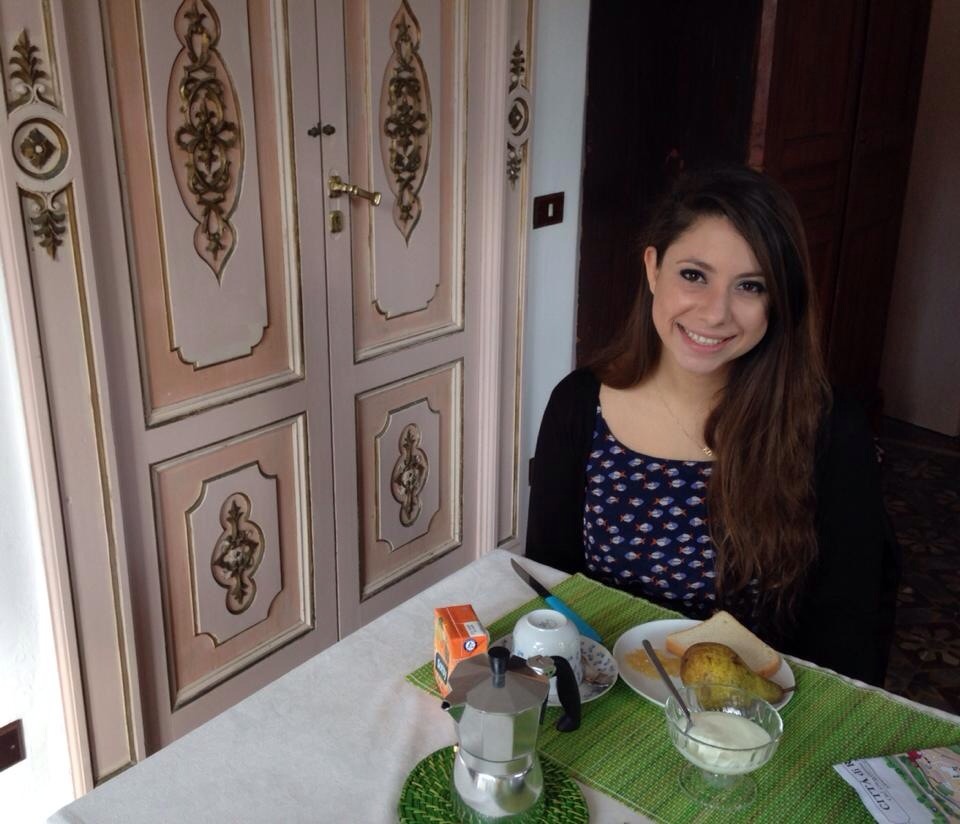 The palace has been meticulously restored and lovingly looked after, so as not to lose any of the original baroque features. The furniture also helps to take you back to a more whimsical architectural period of time. I especially loved the beds! 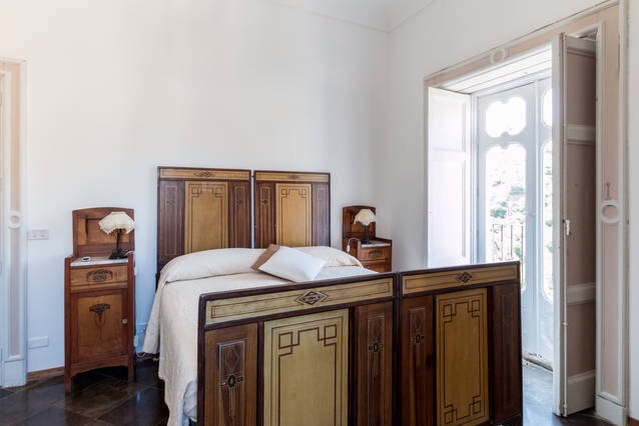 The palace has a little ‘giardinetto’ that clings to the side of the building, perched on a drop. The overgrown courtyard is filled with exotic lemon trees, palms and a host of creeping plants with floating green tendrils and tumbling flowers. 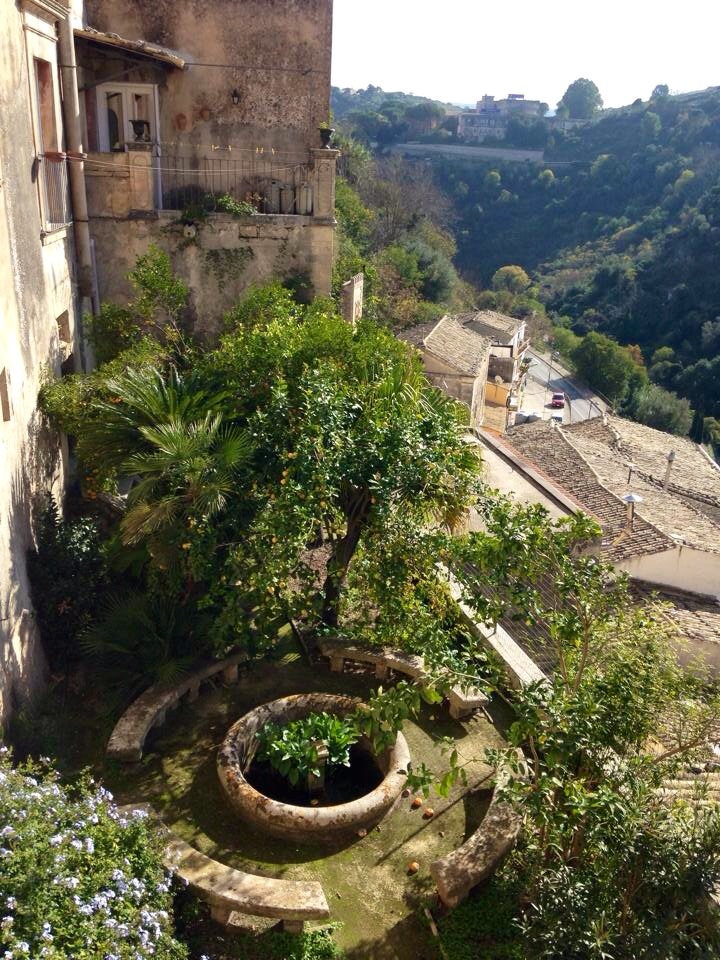 Ester was more than a host, she was a friend. She was so helpful, making sure we caught the right bus, giving us lifts here and there, recommending all the best places to eat and shop – whether it was a hidden trattoria or a newly opened salumeria! I instantly felt at home in Palazzo de Noris, and I know that a large part of that was due to Ester. I would strongly recommend Ragusa as the perfect spring weekend destination, and I truly believe that this palace is the best place to stay. You can find Palazzo de Noris on AirBnB, which is where we booked.

And so the two travellers lived happily ever after in the palace in the clouds (until they had to return to London that is).