By Sarah Alexandra George Friday, May 5, 2017 2 Travel No tags Permalink 0

The Panjiayuan Market – known affectionately as the Dirt Market – is the most exotic flea market you’ll ever visit. Open on Saturdays and Sundays from first thing in the morning till later afternoon, the market covers around 50,000 square metres with over four thousand stalls. The market is rather like an ancient trading post, with wares from all over the world being traded to foreigners and locals alike. It specialises in handicrafts, ornaments, antiques and precious beads and stones, and the traders come from all of the far flung provinces and can be seen as a showcase of all the wonderful treasures that China has to offer. 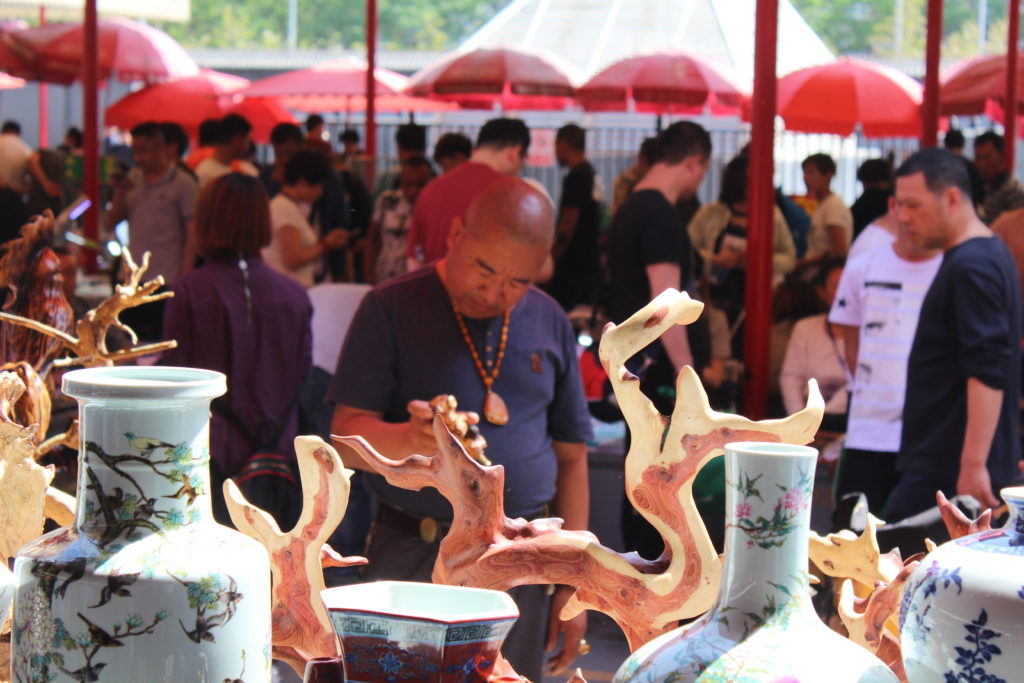 If you’re looking for a Hengshui snuff bottle, Yang Liuqing picture, Jiangsu embroidery, Dongyang wood carving, Quyang sculpture, Shandong shadow puppet, Jiangxi porcelain, Yixing boccaro stoneware, Shanxi bronzes, a Yunnan costume, an article of Tibetan Buddhism, Sinkiang white jade and many many more, then this is the place for you.

Though it has been updated to have a little more structure – all the stalls are organised by region or craft they are selling, and modernised from its original dirt floor (hence the nickname), it still retains it charm and unique hustle and bustle.

Look out for the beautiful faded bronze vessels in a variety of shapes including rare and mythical creatures. We fell totally in love with this fat cat-like creature with a little monkey on its back and a serpent-like handle, and had to take it home with us! I’m unsure what it would have traditionally been used for and some research seems to indicate either an incense burner or a decorative vessel for rice or wine offerings to ancestors. If anyone does know what these were used for, I’d love to know! 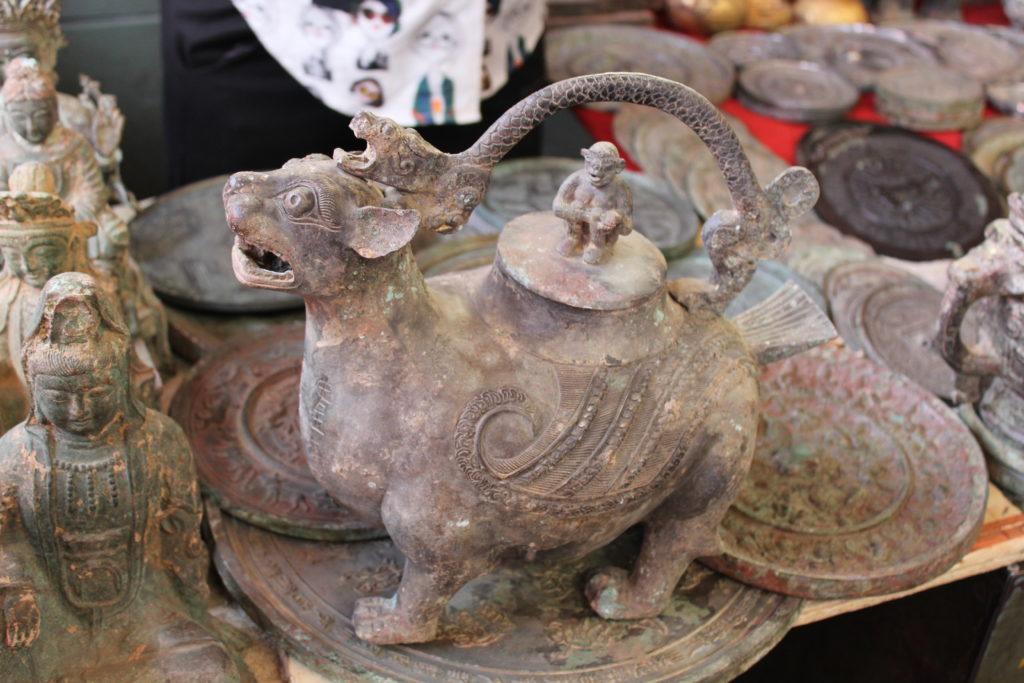 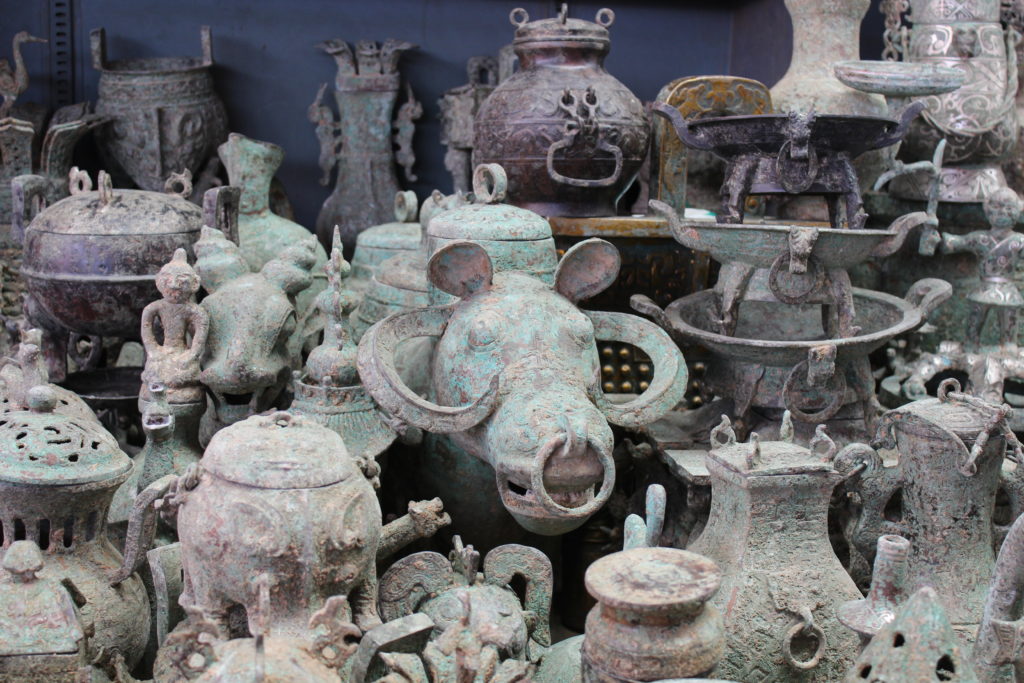 The Chinese are known for their pottery and there’s certainly a lot to see at the Dirt Market! From the very traditional blue and white pottery to different, more modern styles, there’s a style for every taste. You’ll also find row after row of clay teapots in literally all shapes and sizes. Some of them, shaped like pumpkins with animals adorning them, had a distinctly Cinderella feel. 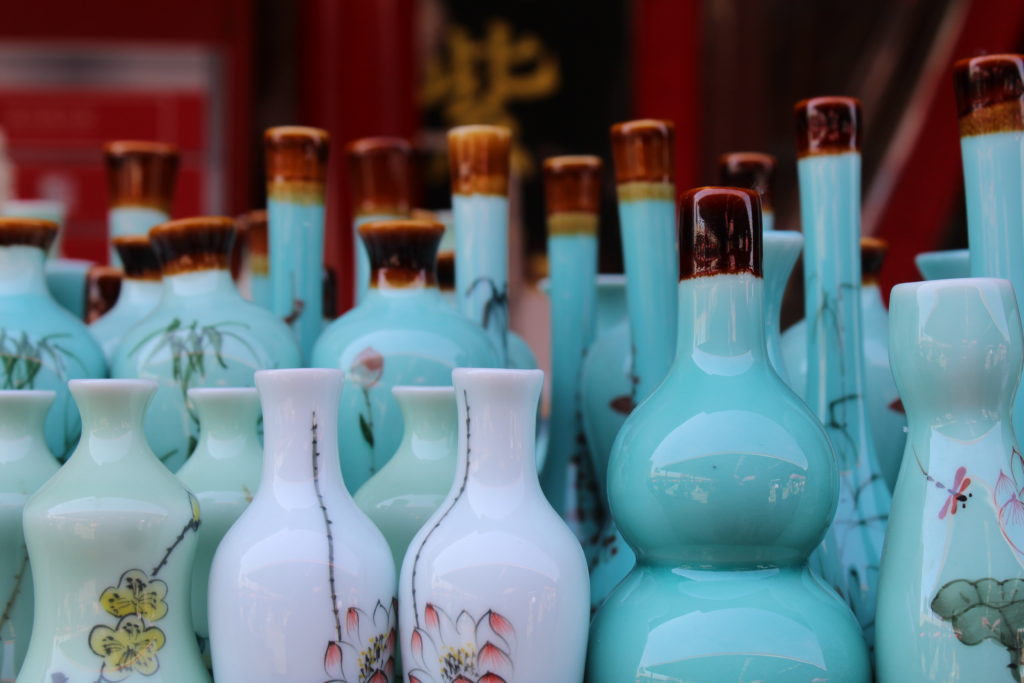 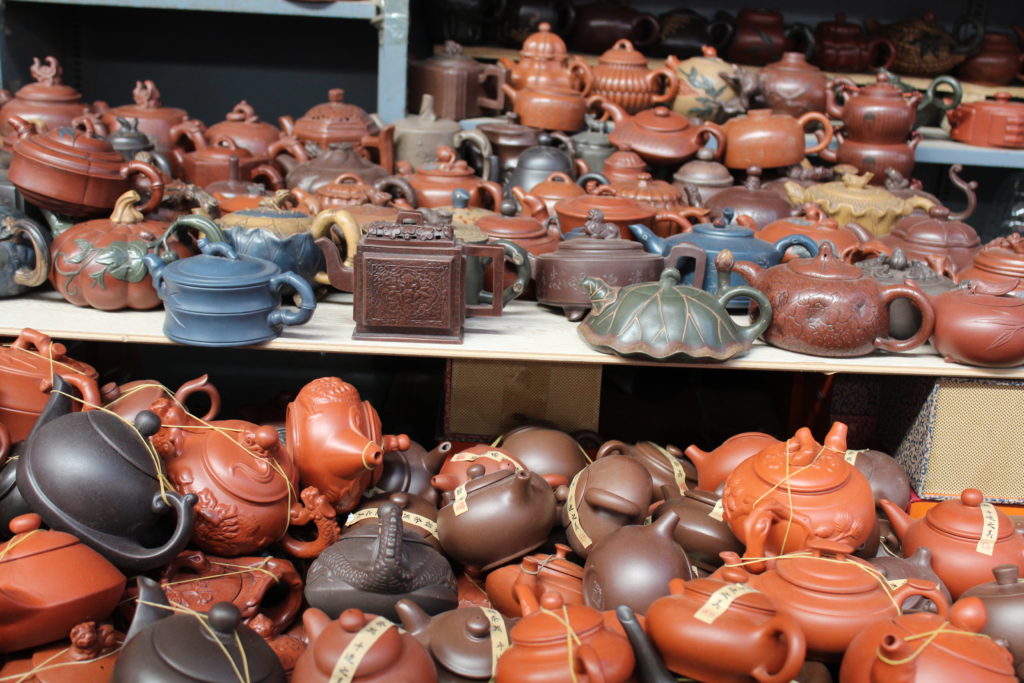 The beautiful calligraphy brushes hang elegantly, poised and ready to paint down the calligraphy aisles of the market. Some have wooden handles, some bamboo, but my favourites are the ones with the buffalo horn handles. The cloudy black and cream horn is such a pleasure to gaze at. 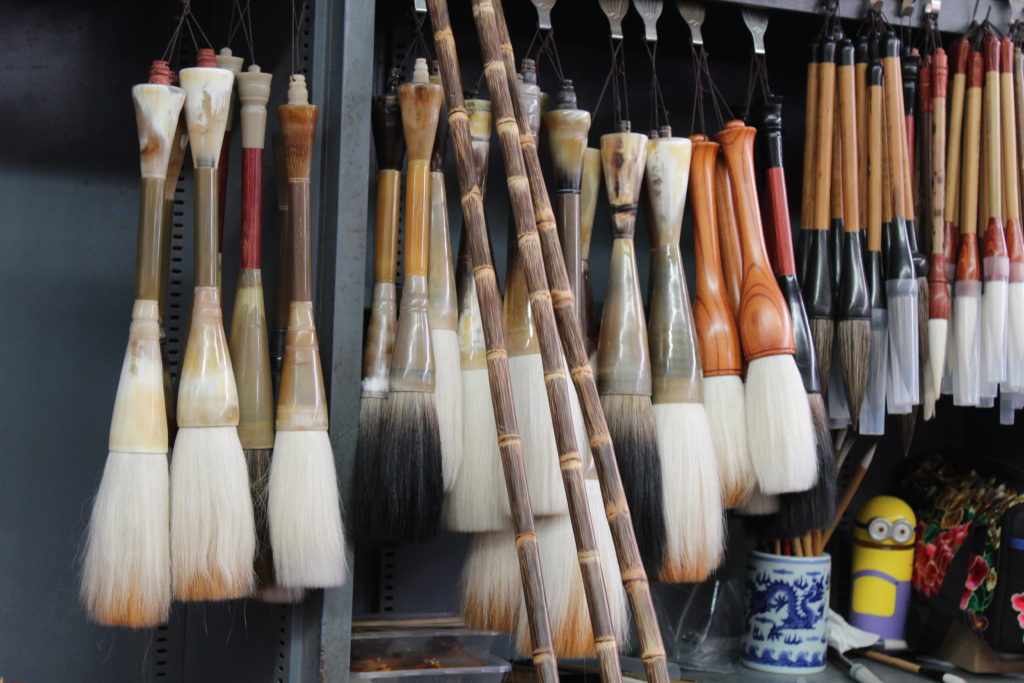 You absolutely must bargain at the Dirt Market (unlike other places in Beijing which have now modernised to a no bargaining policy). Most vendors will pull out their phone or calculator and punch in their first price, and from there you’ll start the dance. One of the reasons I love the calligraphy section of the market so much is that instead of their phones, they write the price out with a brush on a paper board! It’s a clever way to get you excited about using the brush, for once used, you’re bound to want to take one home! 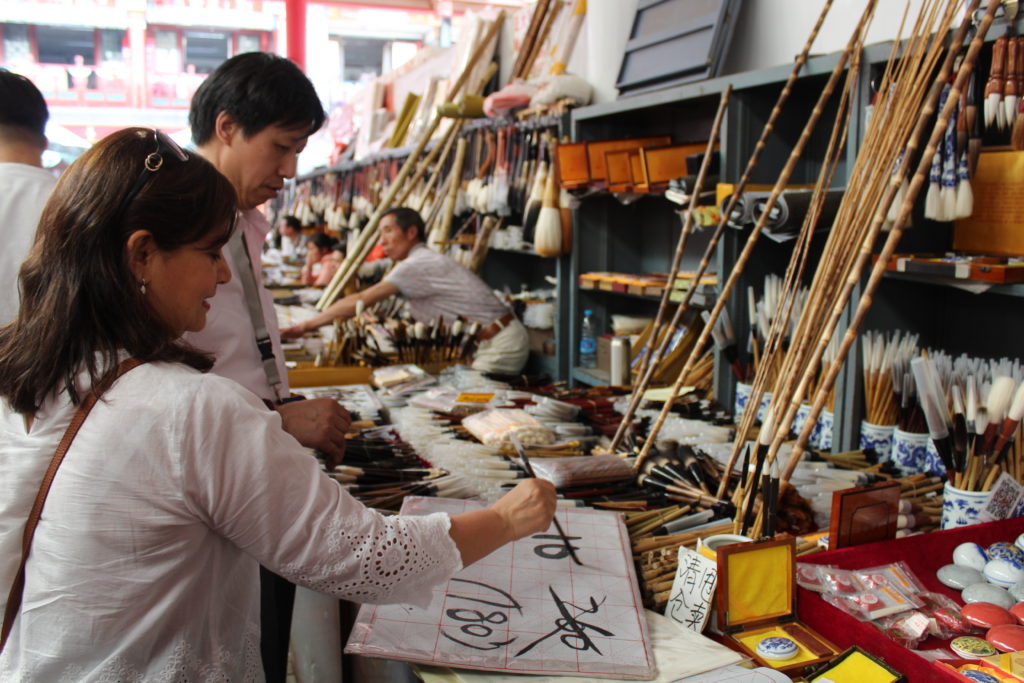 A very large portion of the Dirt market is dedicated to precious stones – strings of beads, amulets, figurines, natural uncut stones, stones to make wax seals. Pretty much every kind of stone under the sun can be found at the Panjiayuan – from the darkest amber to every colour of jade you could dream up. My favourite stone was a pale pink and grey smoky stone. Unfortunately I couldn’t find out what it was called – forever lost in translation. 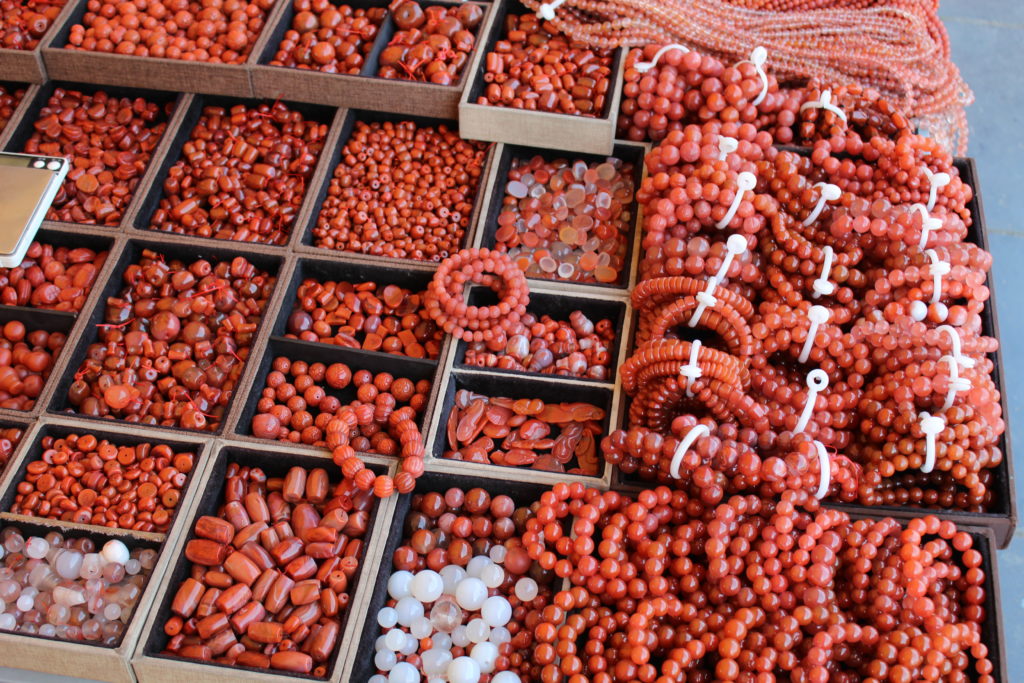 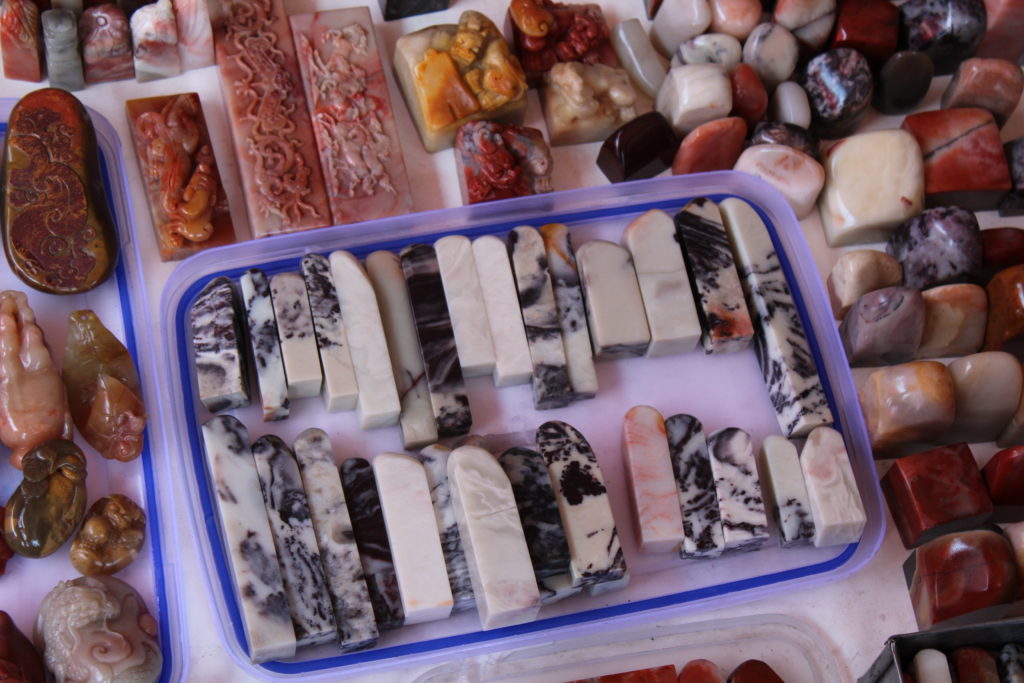 Everyone who knows me knows I am terrible at jokes – can’t ever think of any and if someone says one, it might take me a week to get it! Puns aren’t my thing at all, but having heard this one in my head, I couldn’t help but share it!

There’s quite a lot of Mao memorabilia to be found in Panjiayuan market, and it may be hard to resist walking away with your very own kitsch mini statue or a little red book! 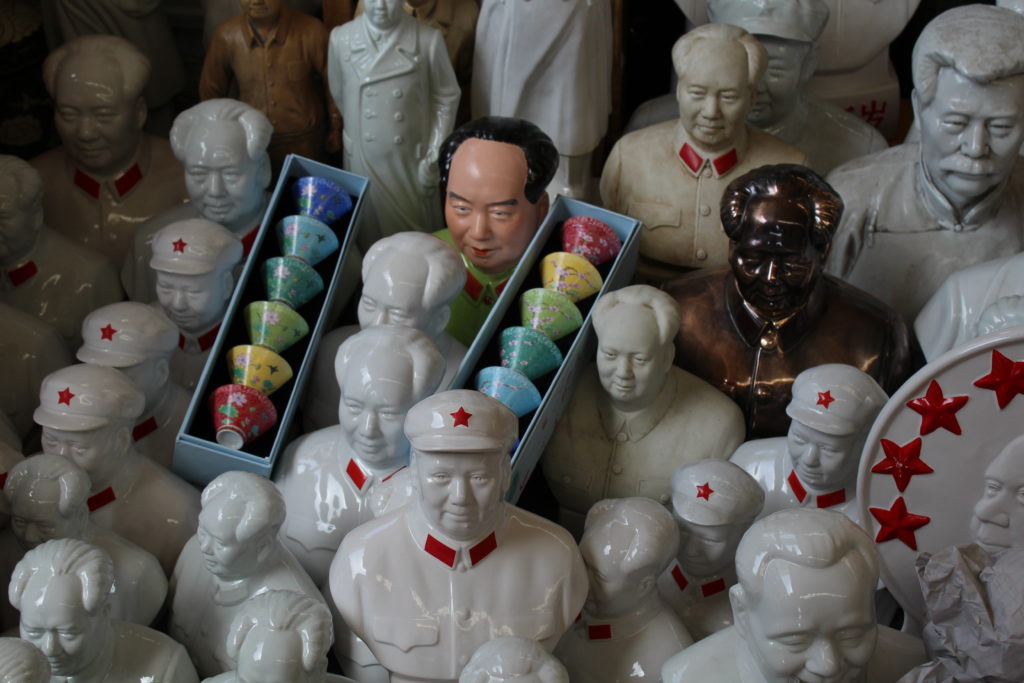 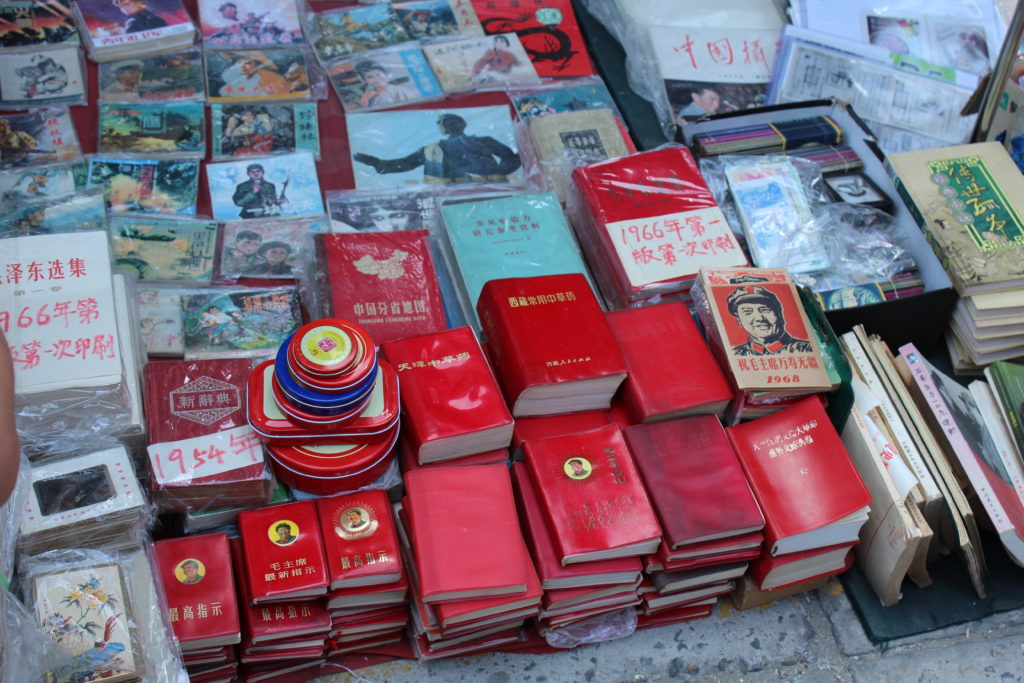 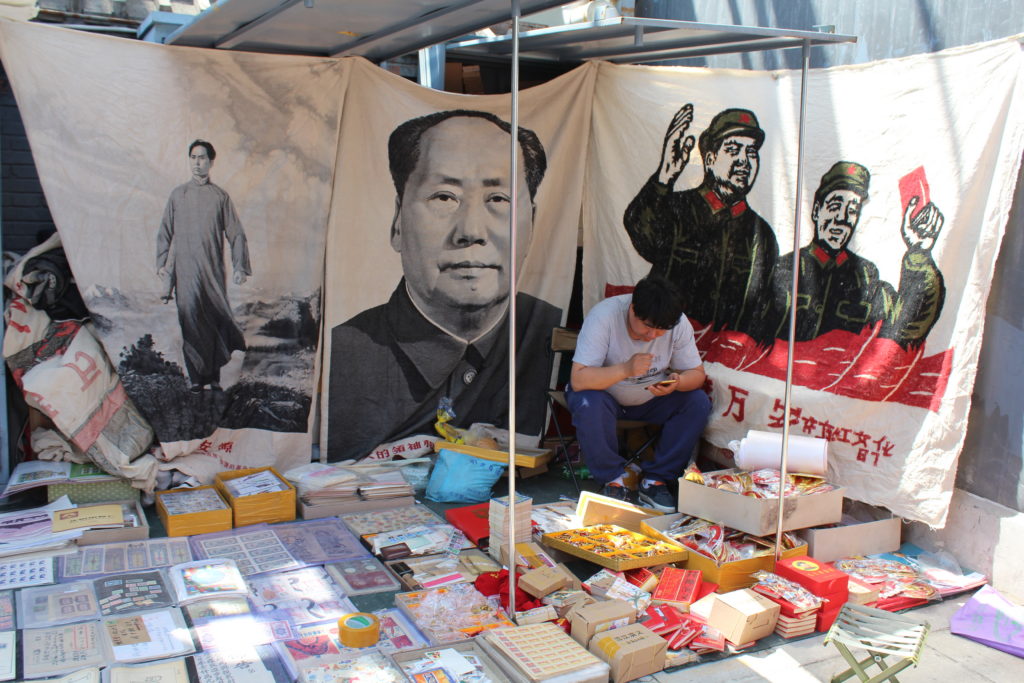 The whole back area of Panjiayuan market is one big book street market which really made my heart sing. I always love evidence of people reading in this day and age. One elderly Chinese gentleman in particular really tickled me as he filled his shopping bag with books. 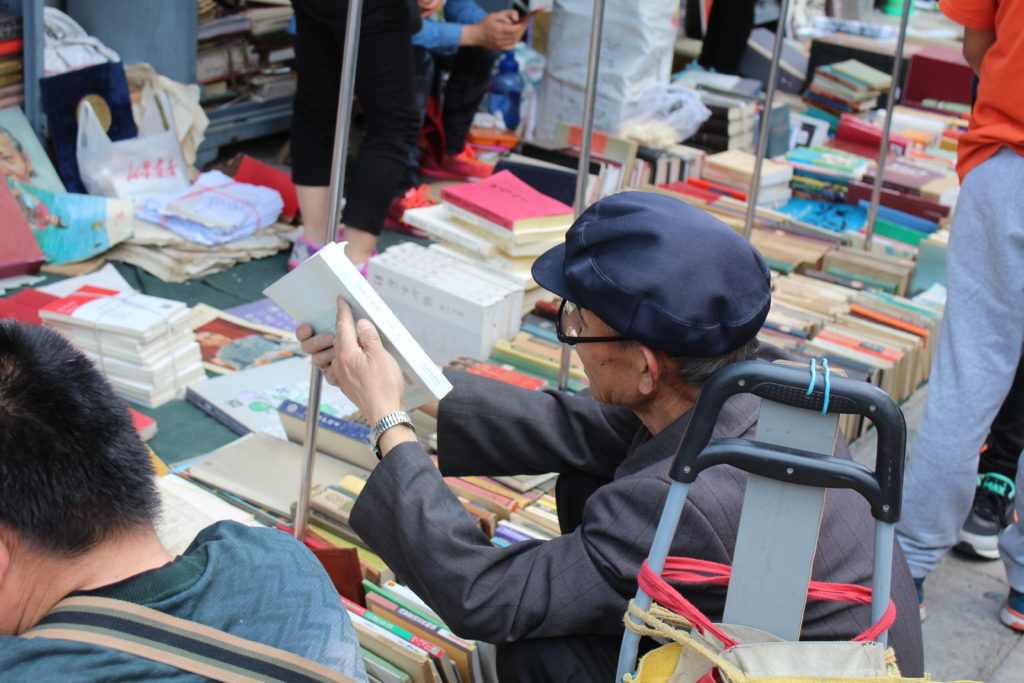 There are some unexpected finds in the dirt market and French antique clocks are definitely on the list! My father – an avid clock aficionado –  was very tempted by one particularly elegant skeleton clock. 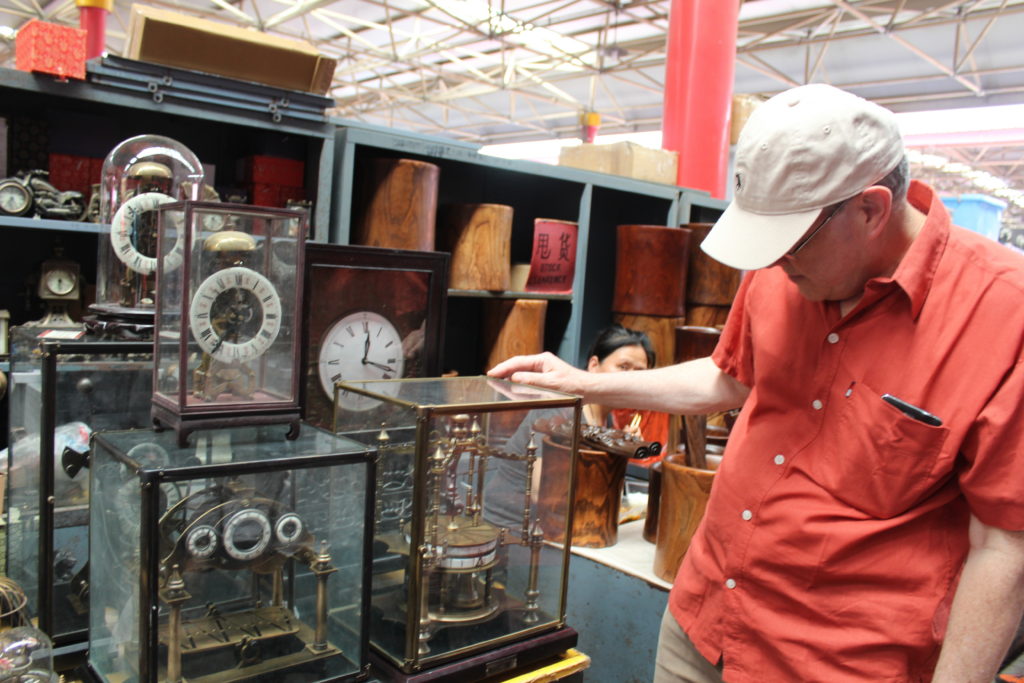 If you’re in the market for a statue for your garden or a water feature, the dirt market is once again the place for you! Everything from aged stone Buddhas, Chairman Mao in glistening white marble to coloured stone pufferfish. The collection is nothing short of eclectic! 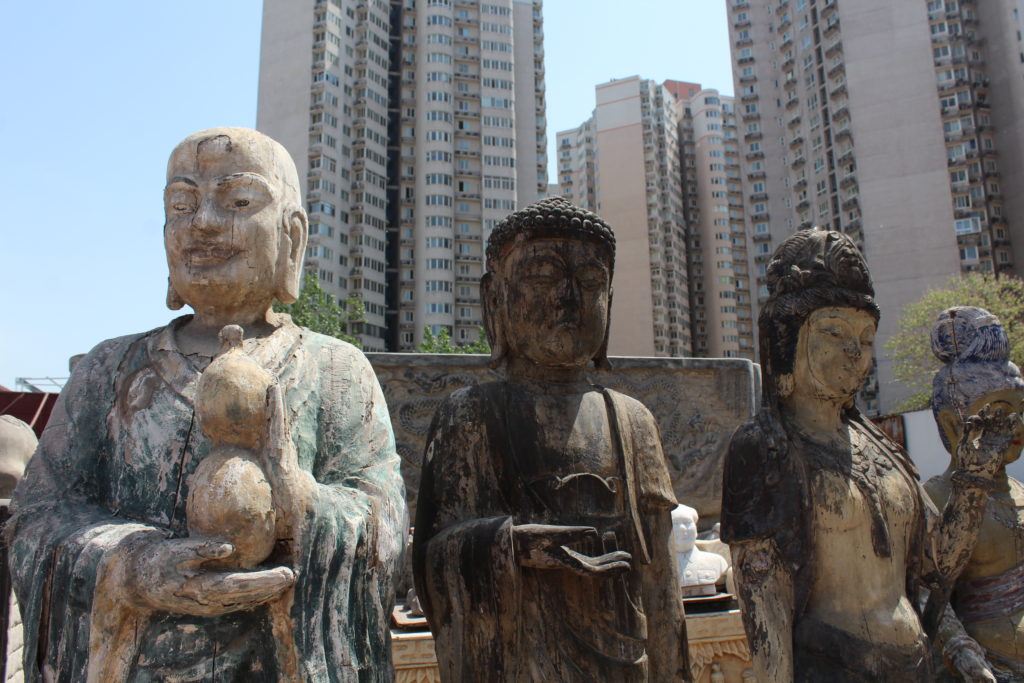 Shadow puppets always make me think of Indonesia and my parents, as we have quite a collection back home that they picked up while living out there. I love the fact that this tradition is all over Asia as shadow shows are so entrancing. I’m not sure which region this tiger came from, but there’s something quite delightful about his expression; and something quite grumpy about the horse behind him! 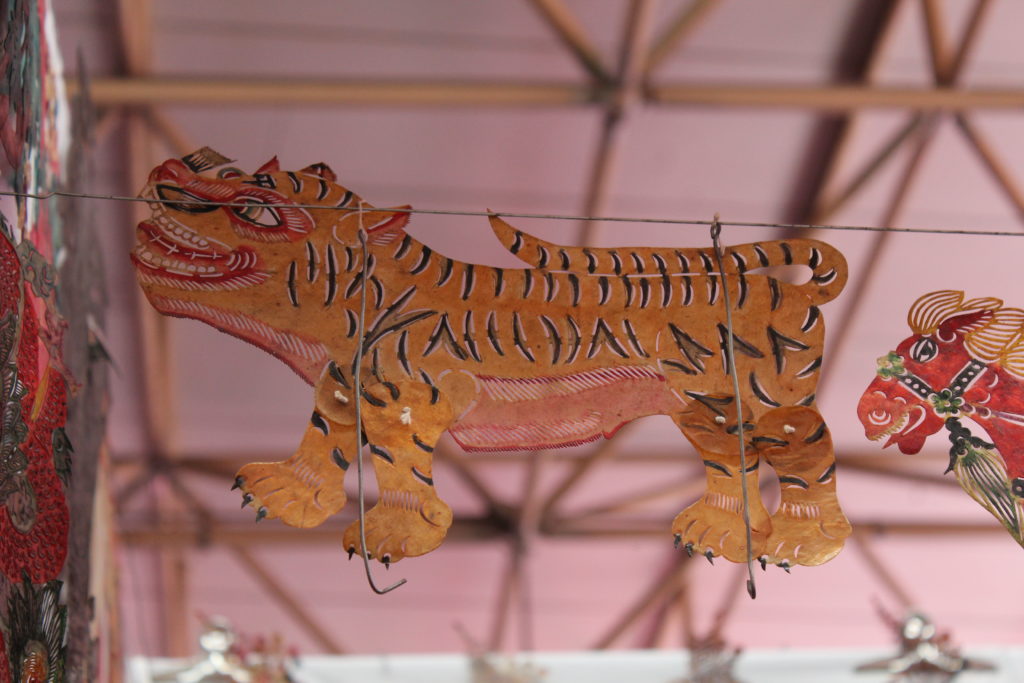 The only stall that I bought something at was a traditional jewellery stall from some place out in Western China near Chengdu. The trader tried to explain the name to me, but I failed to quite understand the provenance. We asked him to show us on the map, but his map was only in Chinese characters and he point blank refused to zoom out of it so I could place the location! When I got home I searched the map of China to try and find a similar sounding place but alas, to no avail. The beautiful silver jewellery was often mixed with intricate embroidered patterns. I’ve never been a big jewellery lover, but for some reason the bracelet below just called out to me. I haven’t taken it off since, and the jingle jangle of the bells have driven my parents mad! 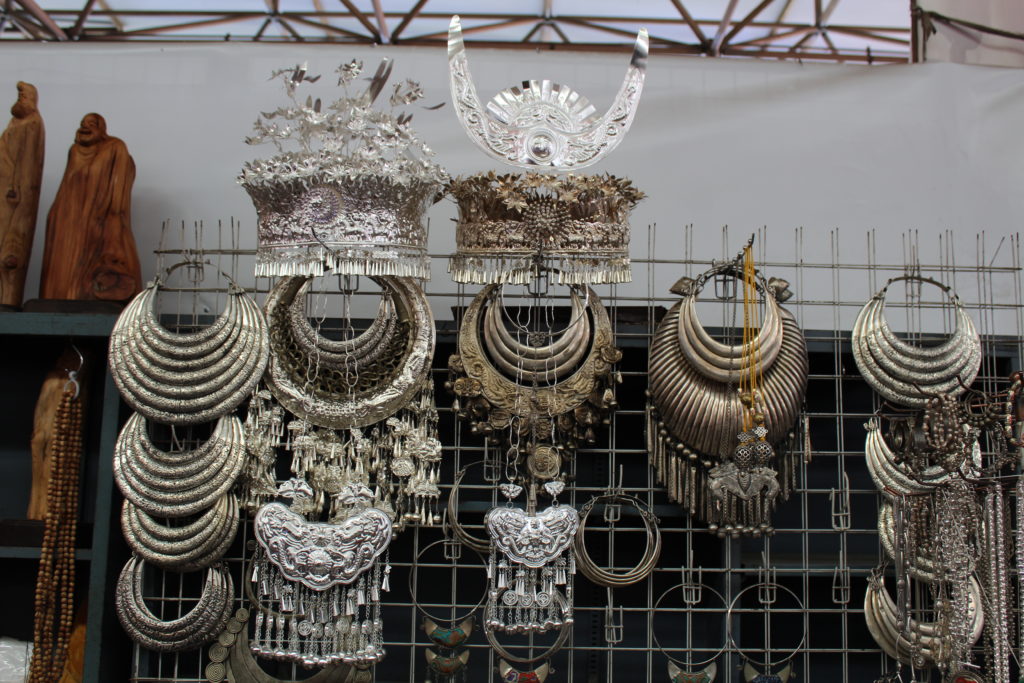 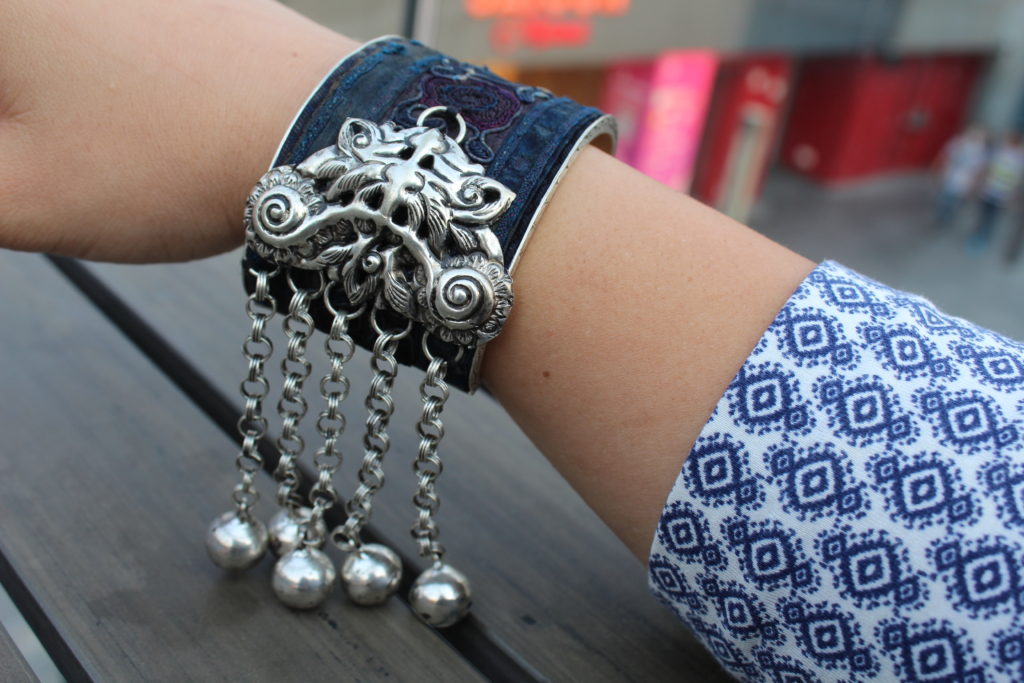 I particularly loved those stalls as the traders were obviously from a far away place. The women wore colourful embroidered necklaces and had silver serpent pins in their hair, their ears expanded by huge silver rings. I thought perhaps Tibet, but I guess I might never find out. Nothing wrong with a bit of mystery.

Other Hidden Treasures at Panjiayuan

Panjiayuan market is so full of unexpected treasures, I barely scratched the surface. It’s easy when all the items are grouped by type as above, but once you reach the inner depths of the stalls, each stall has a total mismatch of items for sale. This means you almost need half an hour per stall just to see what they have on offer! I could have easily spent a week just wandering around entranced. 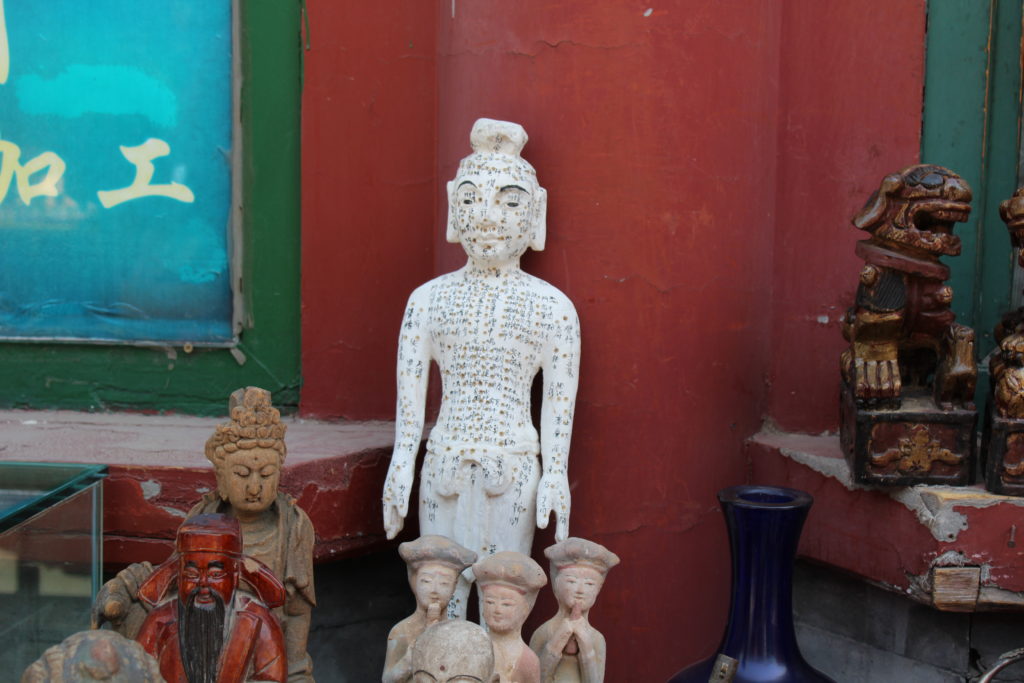 Last but not least, for all the horse lovers, I even happened to stumble upon some authentic Western leather saddles at a leather shop! I was a bit suspicious at first, and my suspicions proved to be correct. Upon further inspection I found a ‘Martinez, Mexico’ stamp underneath the stirrup leather. I think perhaps the leather worker was using them to draw customers in and it certainly worked for me! 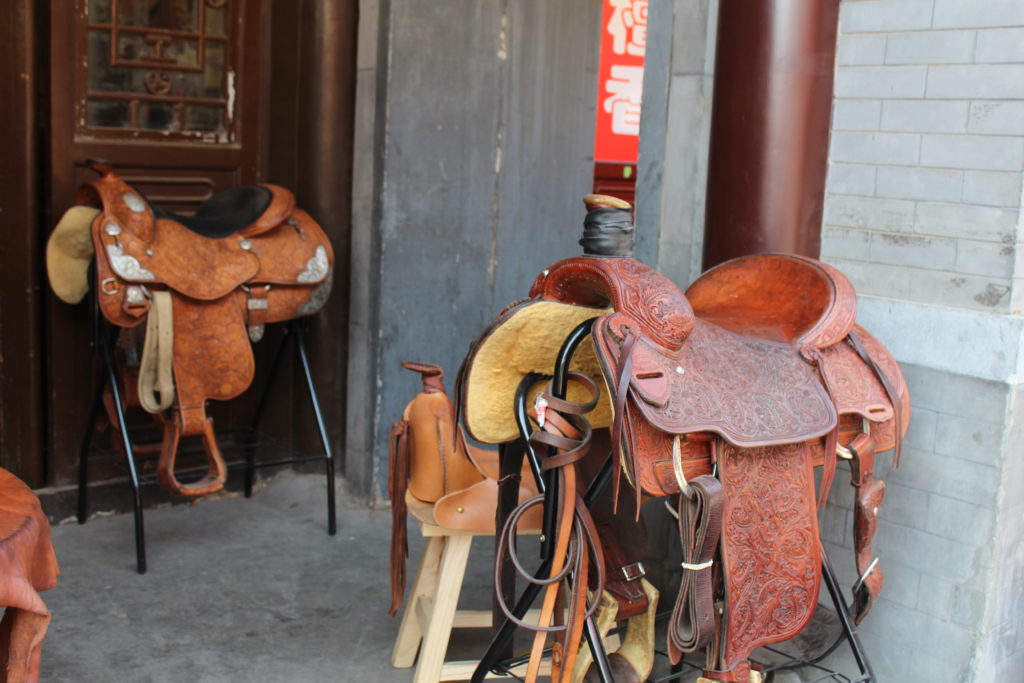 You can get to Panjiayuan Market on the number 10 metro line – the stop is also called Panjiayuan and the entrance is right outside the metro exit! You can’t miss it.