Québec City or Ville de Québec is one of the most charming, and arguably overlooked cities in Canada. Though year after year it tops the ‘best places to visit in Canada’ lists, it’s still relatively unknown in the UK. The 400-year-old historic city sitting on the banks of the St. Lawrence River blends old-world sensibility (cobbled streets, colonial architecture) with new-world sense (chic bars and nouveau restaurants).

Without a doubt my favourite thing to do in a new city is to wander around, get lost, and just soak everything up –  visually – but also the sounds, scents and the emotions within a city. Québec City doesn’t disappoint and the mix of the classic architecture with more modern buildings was one of my favourite parts. Start off in Old Québec.

The ramparts surrounding Old Québec (Vieux-Québec) are the only fortified city walls remaining in the Americas north of Mexico, and were declared a World Heritage Site by UNESCO in 1985 as the ‘Historic District of Old Québec’. 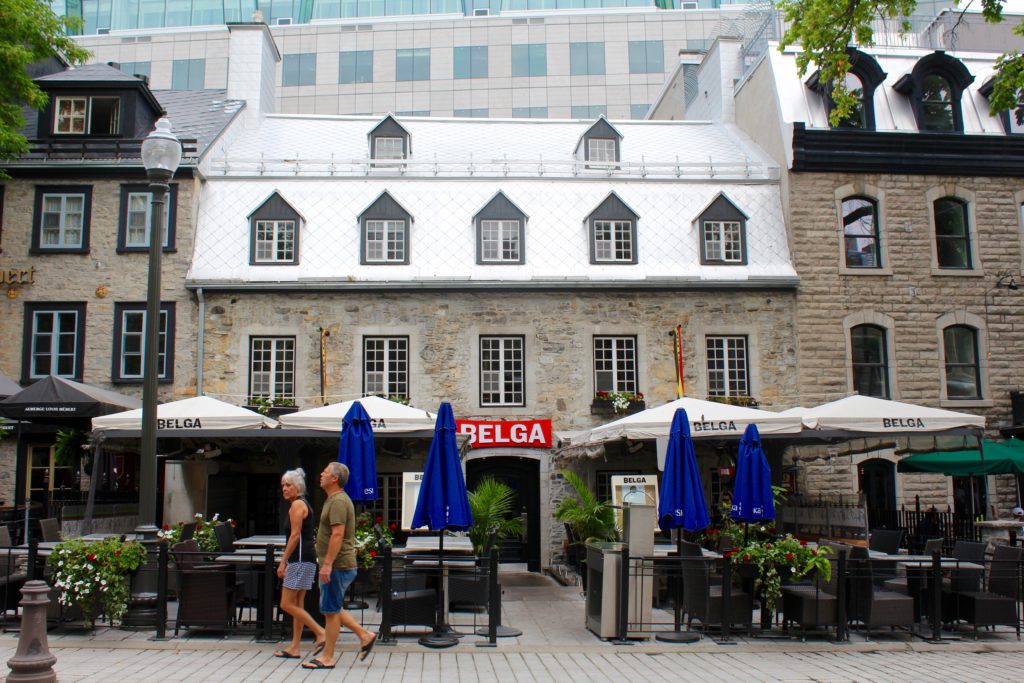 Afterwards, head to the Château Frontenac, designated a National Historic Site in 1980. While this might look more like a castle, it was actually built as one of the grand hotels for the Canadian Pacific Railway company in the late 19th century and was opened in 1893. The World War II Allies’ Québec Conferences of 1943 and 1944 were held at the Château Frontenac. 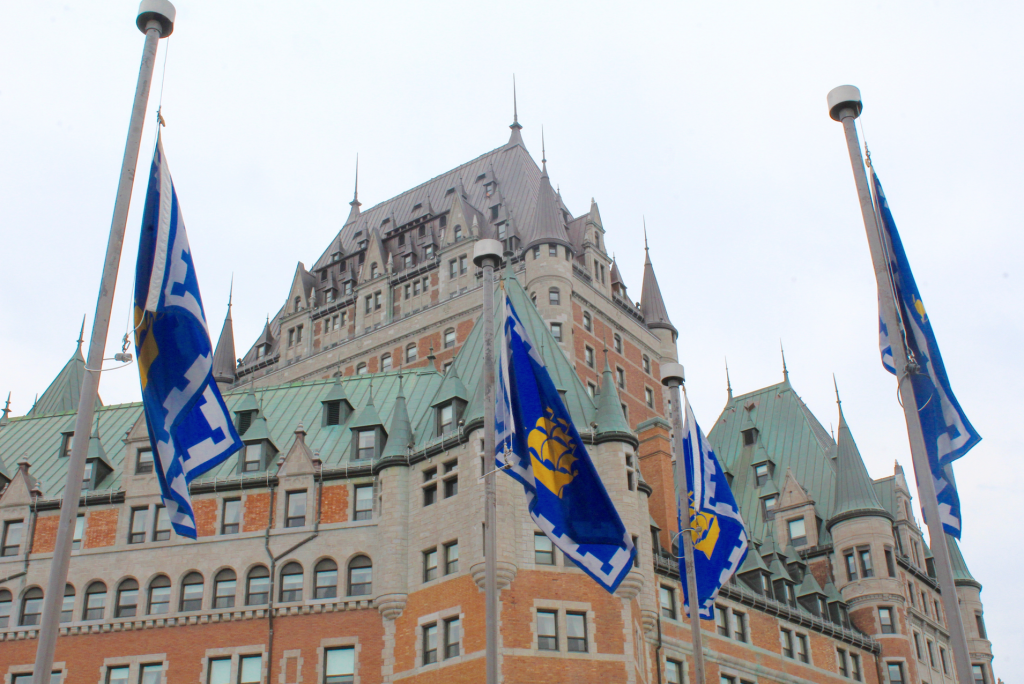 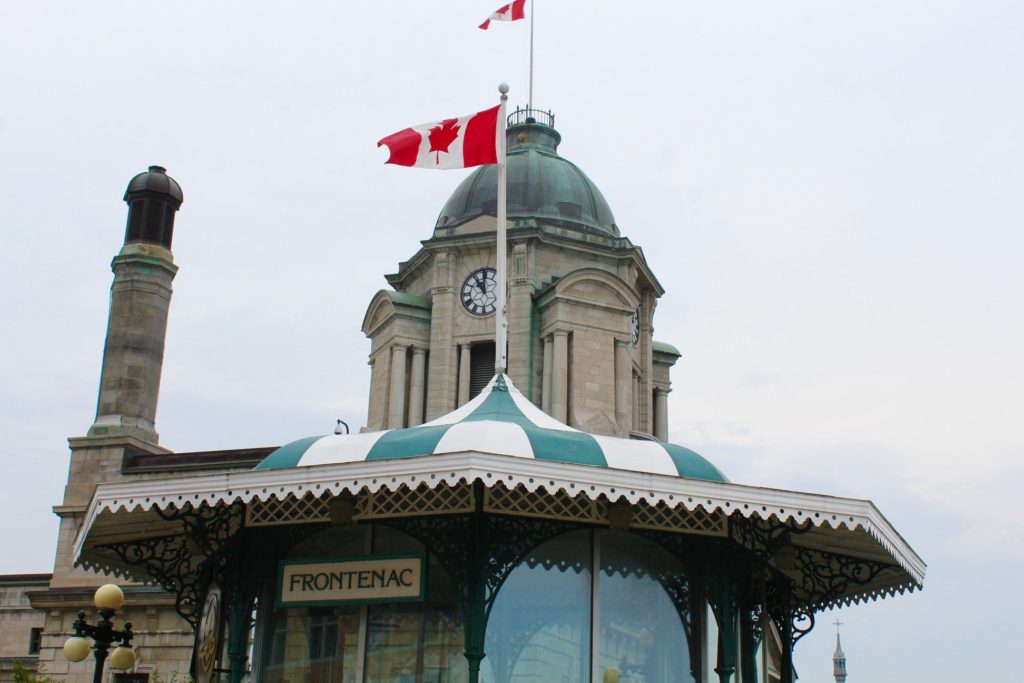 Everywhere you go in Québec you’ll come across charming buildings, and these houses by the modern concrete Concorde Hotel were my favourites. They reminded me a little of the houses in San Francisco you see on Charmed. 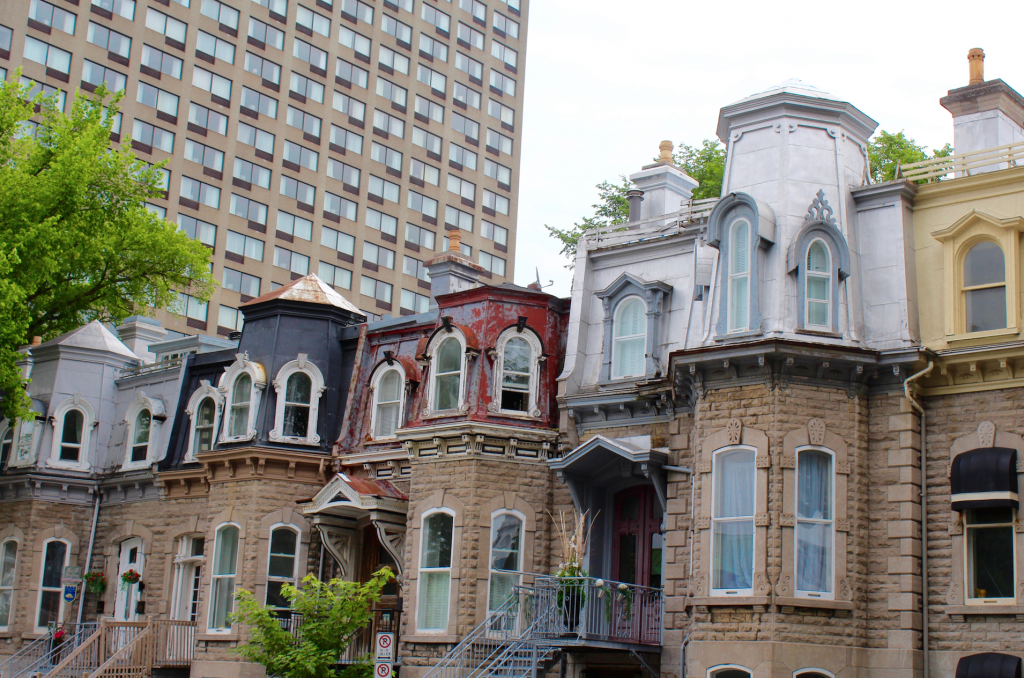 We found traditional Québecois food to be hard to really define or find. Of course the famous poutine is on everyone’s menu, including at the ice rink, however if you’re unmoved by what is essentially ‘cheesy chips with gravy’, you may want to look a bit harder. 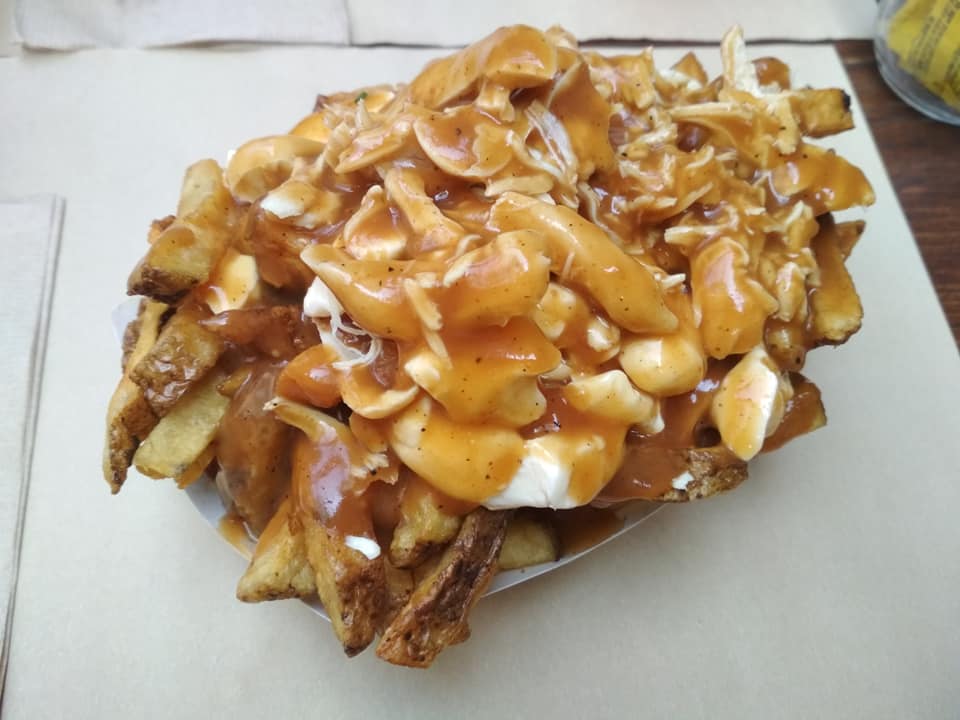 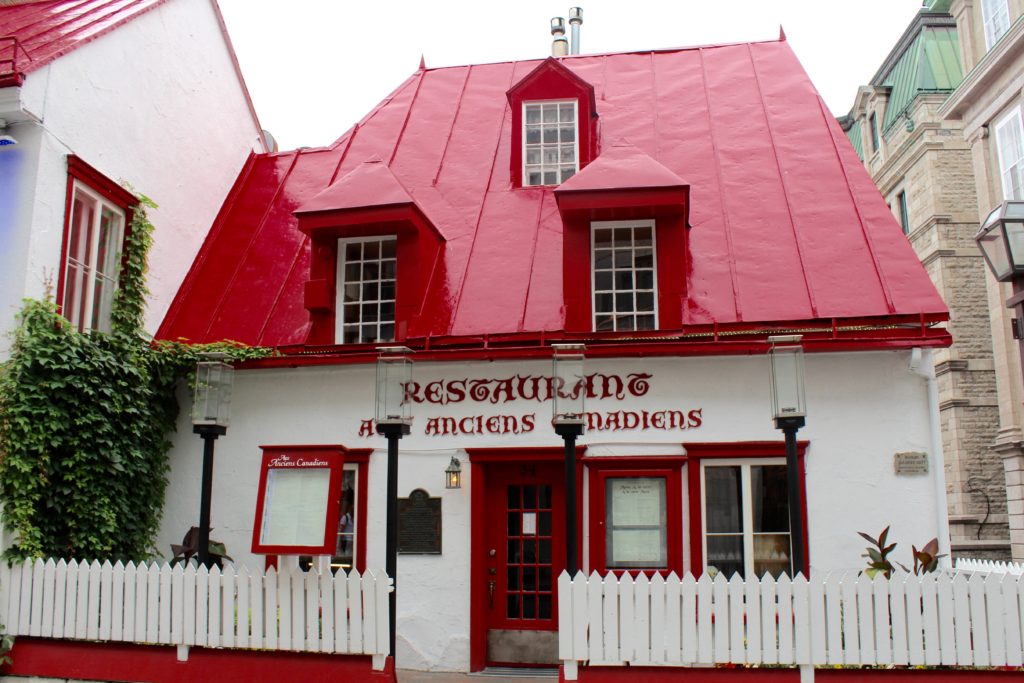 Elsewhere though, we found the food to be of a consistently high quality, simple ingredients cooked really well. 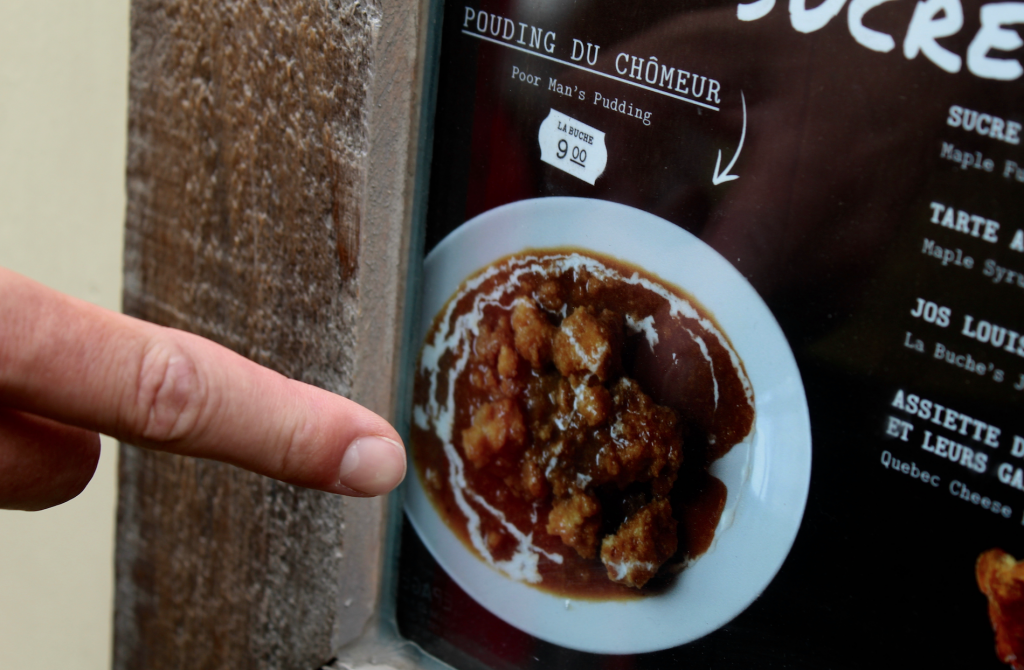 If you can’t handle any more poutine or Western flavours, try the Afghan restaurant, Les Delices De Ariana on Avenue Cartier, one of the more unusual streets with giant lampshades lining the road.

The lamps were accomplished by transferring works by Alfred Pellan and Fernand Leduc from museum collections onto the lampshades.

Québec City straddles the banks of the St. Lawrence River and there’s something so peaceful and relaxing about seeing water. The vew from our hotel window was absolutely spectacular: the confluence of the manmade urban city with the hidden power of nature.

Make sure to go for a walk along the waterfront but if you want to get out onto the water you can take the cute ferry across to Ville de Lévis, where there are a number of historic homes, museums and good bars to visit. 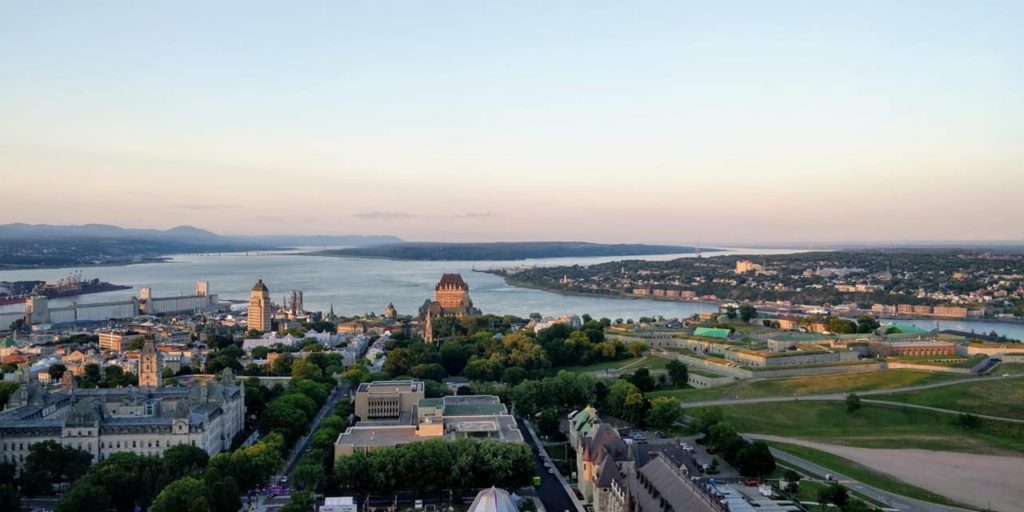 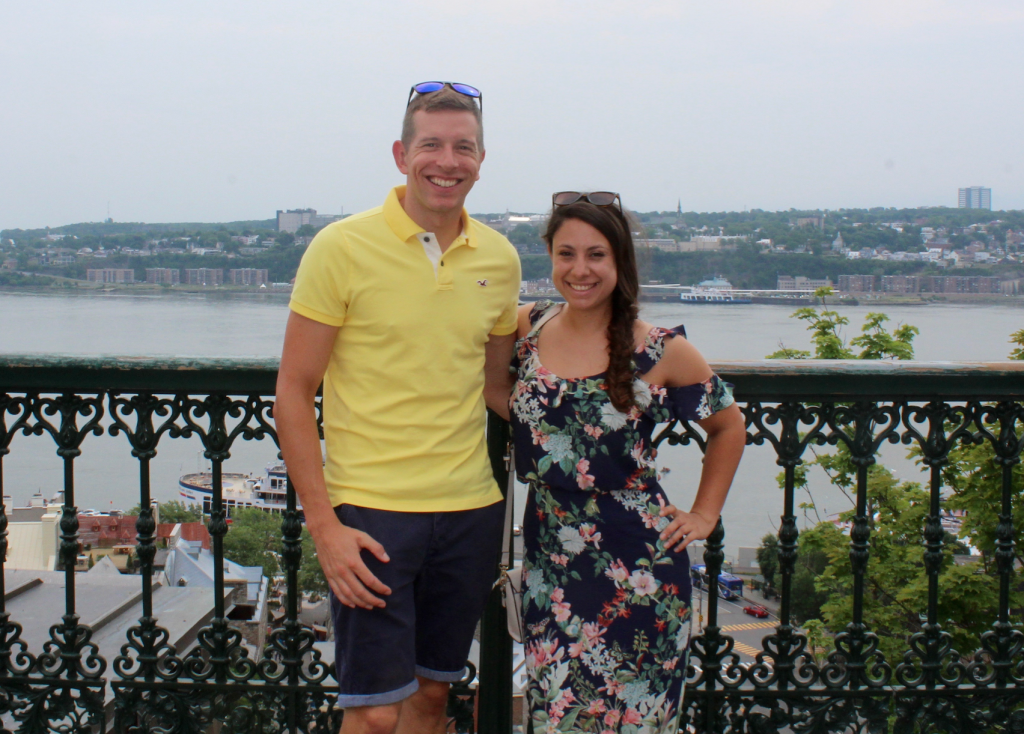 Everyone loves Maple Syrup but the Canadians love it even more. From Maple Syrup in the duck confit salad dressing to Maple Syrup cola, it’s ubiquitous! 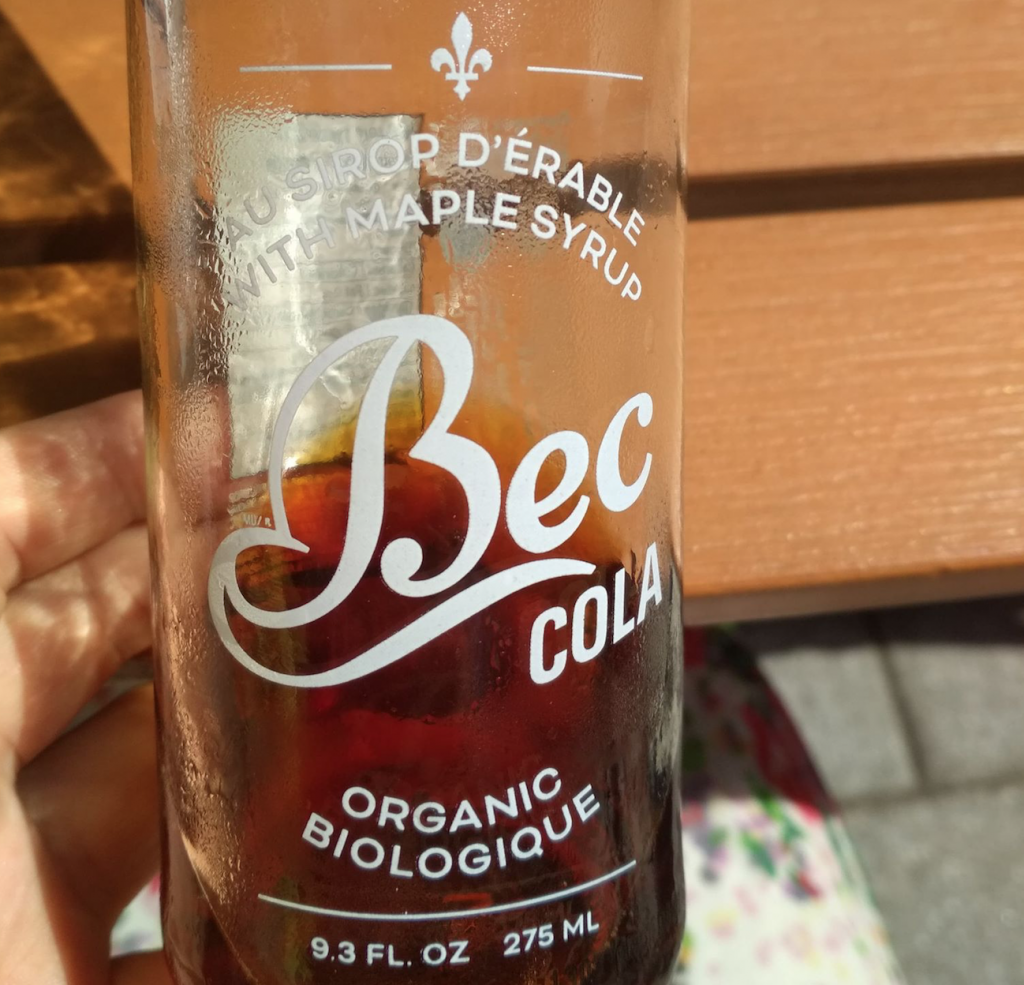 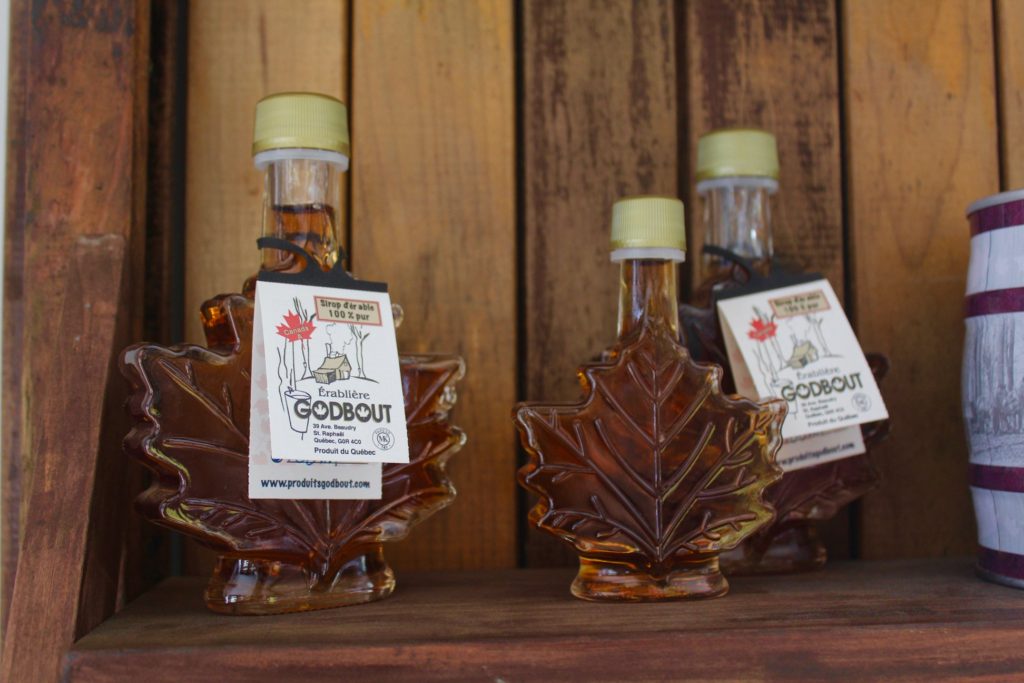 Make sure to try the famous Maple Syrup Taffy too – they pour hot syrup onto ice and then you roll your wooden stick along the hardening syrup to make a kind of lollipop. My hat goes off to anyone who is able to eat a whole taffy stick without suffering the effects of a sugar overdose! 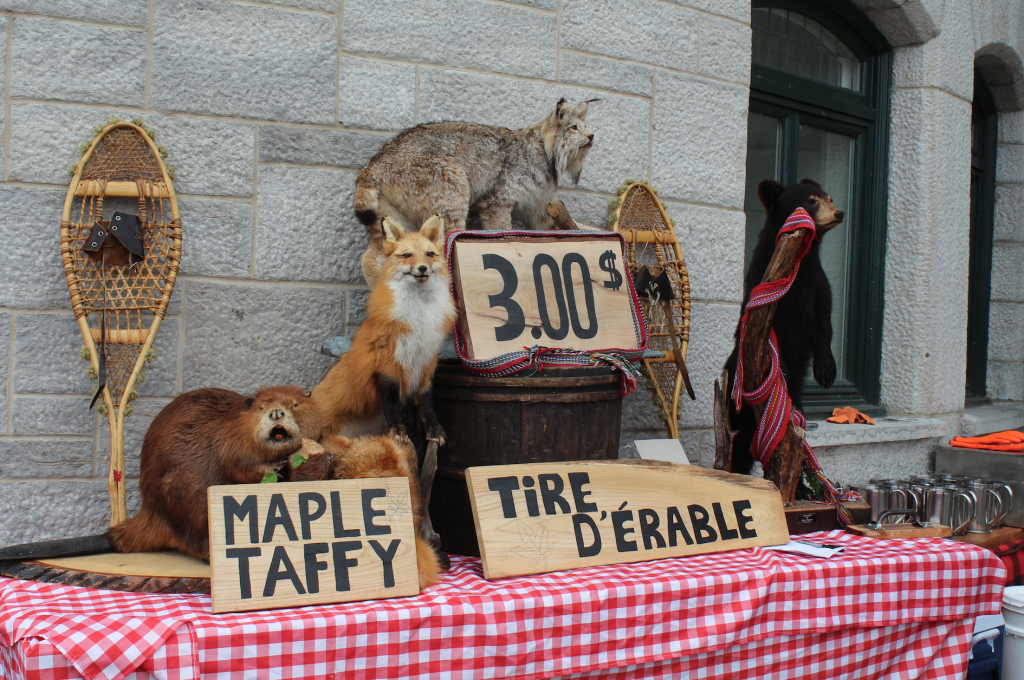 If I’m totally honest, I really struggle with the Québecois accent, it sounds nothing like French to my European ears. When I got in the taxi at the airport I chatted happily to the driver the whole way back to the hotel, pleased that my GCSE French all came back to me. I soon found out though, that he was Algerian, and it was the last French I was to fully understand on my 10 day trip. I still tried though, so get out there and speak! Even if you can’t understand, it’s lovely to listen to.

In my opinion, every town and city should have a funicular, there’s something totally charming about them that just fills me with excitement. This may prove difficult in flatter landscapes, however most places have a hill so I’m sure it can be done!

Regardless, make sure to take the little funicular which links the Haute-ville to the Basse-ville from the Château Frontenac down to the water front. Opened in 1879, it climbs at a 45-degree angle covering a total distance of 64 metres. 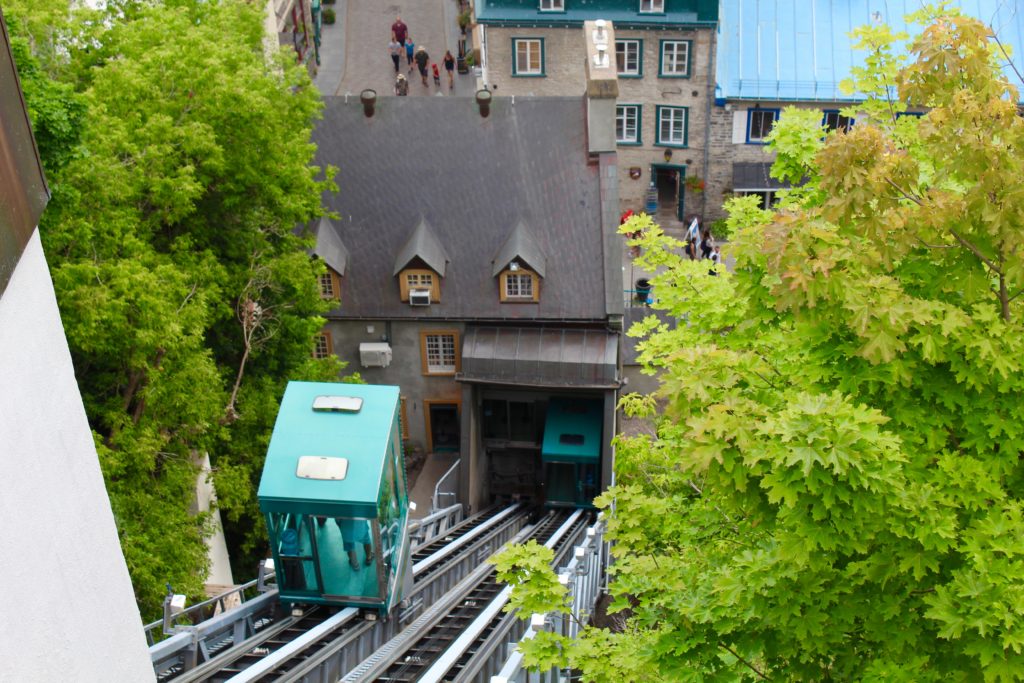 Obviously I am biased, but the military history in Québec City was incredibly exciting. From the Cannons overlooking the river by the Rue de Carrieres to the Old Garrison Club, The Citadelle, the Plains of Abraham to my personal favourite: The Voltigeurs de Québec Armoury. 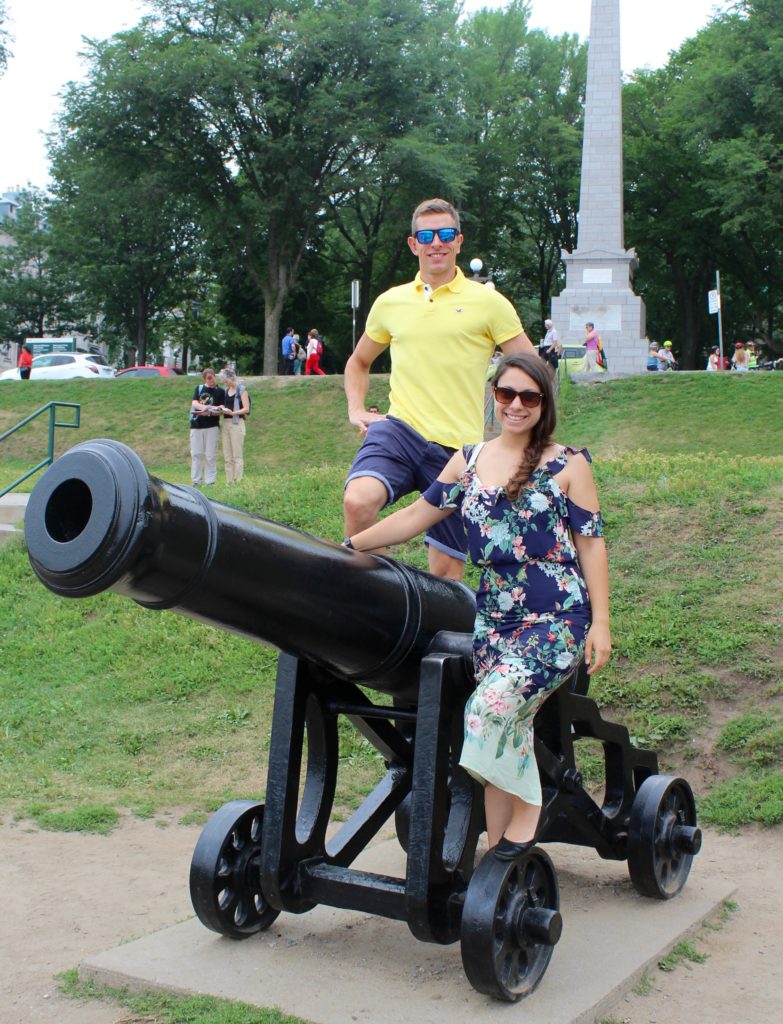 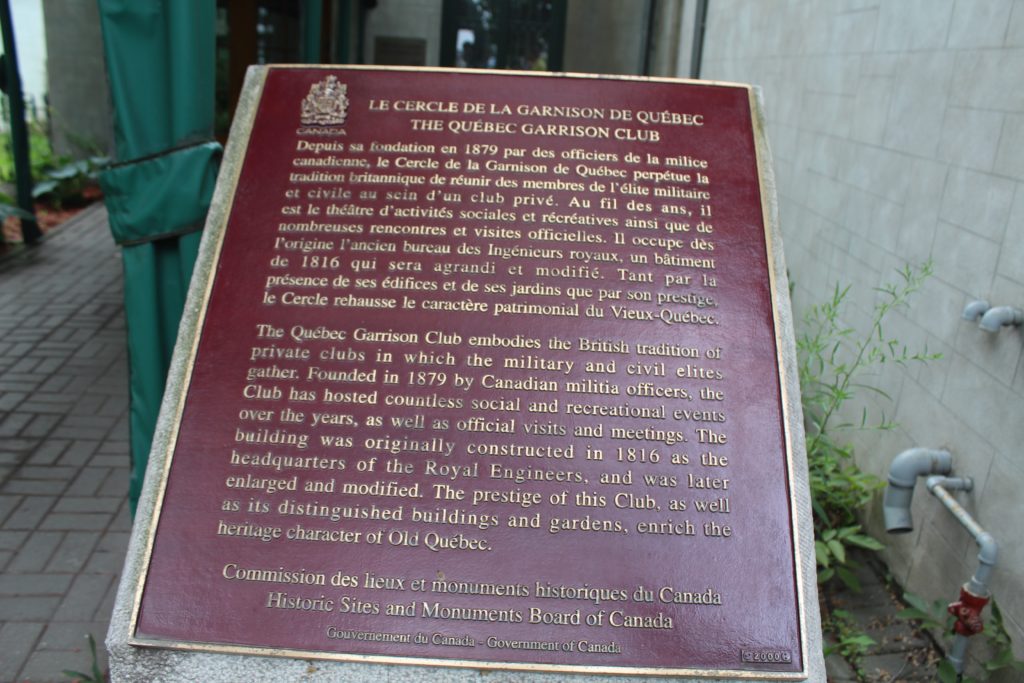 The Plains of Abraham is within the Battlefields Park of Québec City and the location of the Battle of the Plains of Abraham in 1759. During the Battle, British soldiers, commanded by General Wolfe defeated the French. The British approached from upstream, a feat the French never imagined possible and ascended the cliff under the city by cover of darkness, thus maintaining the element of surprise. They defeated the French with a thin red line of Musket Fire and the battle was over in 30 minutes. Both commanders died but Québec was now in the hands of the British which was key to them taking control of Canada the following year.

In winter (mid December to mid March) the Plains of Abraham houses a giant Ice Skating rink which can accommodate up to 350 skaters, I can’t think of anywhere else in the world that has a Historic Battlefield ice rink! 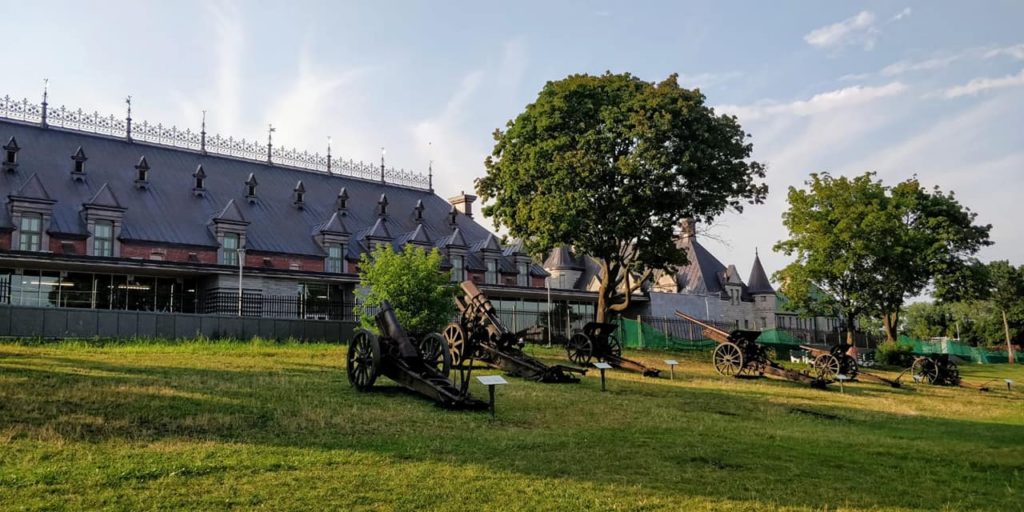 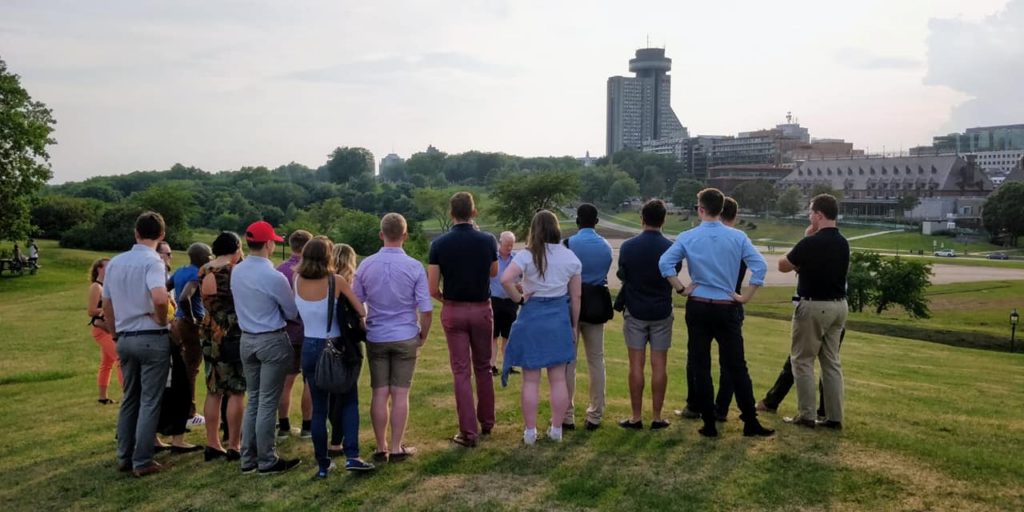 My favourite building in Québec is the Voltigeurs de Québec Armoury (below), a stunning Gothic revival drill hall, built between 1885 and 1888 for the Voltigeurs de Québec Infantry Reserve Regiment. It is not only stunning on the outside but also within, a huge wooden ceiling providing the perfect modern foil to the historic design. Make sure to look out for the old uniforms on display! 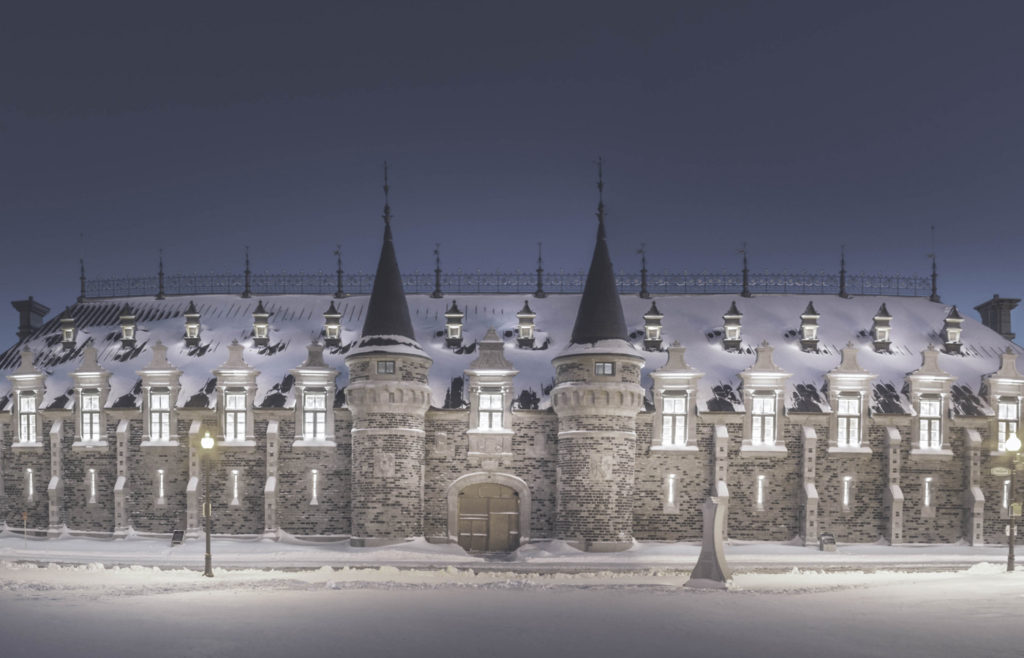 You absolutely cannot go to Canada without going to see some Ice Hockey, and although Québec City no longer has it’s own NHL team (The Québec Nordiques were relocated in 1955 and became Colorado Avalanche). However the Centre Vidéotron is a huge Ice Rink seating up to 19,000 people and often hosts smaller league games and charity games. We were incredibly lucky to be in Québec for the biggest Ice Hockey Game of the year: the Pro-Am Gagné-Bergeron, which mixes both professional and amateur, current and retired Quebecois players for one fun evening of Ice Hockey. This was followed by a concert by Simple Plan, the Canadian Rock band from Montreal, so there’s always a lot going on at the Centre Vidéotron!

Don’t forget to stock up on your Nordiques apparel when you’re in Québec! There’s nothing trendier than the sky blue fleur-de-lis vintage hockey jersey. 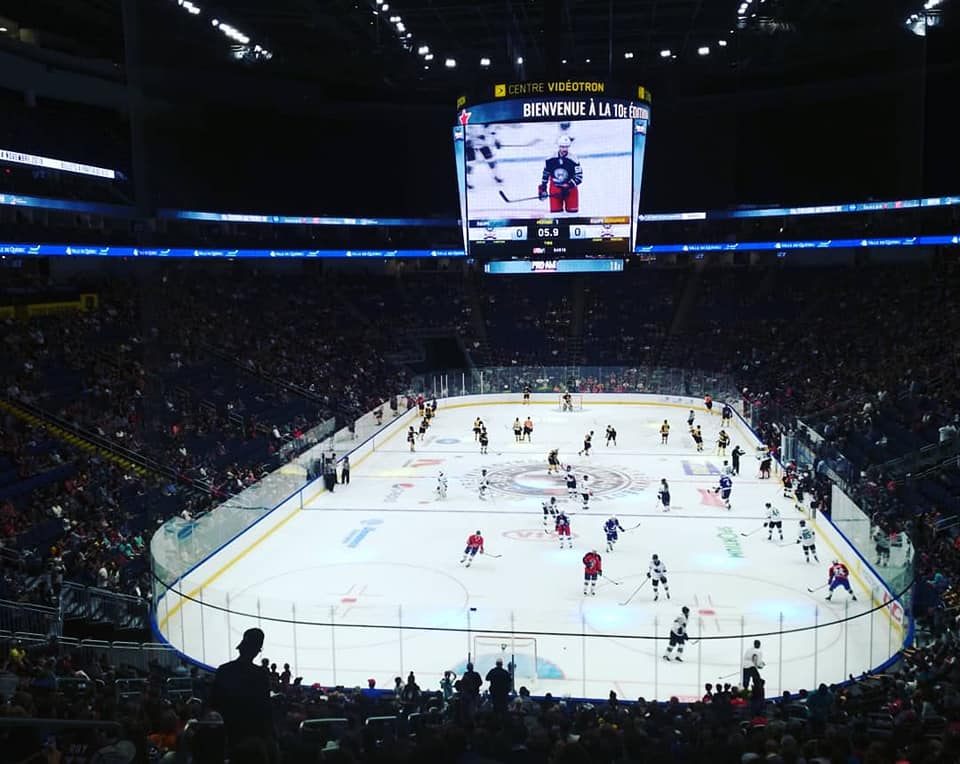 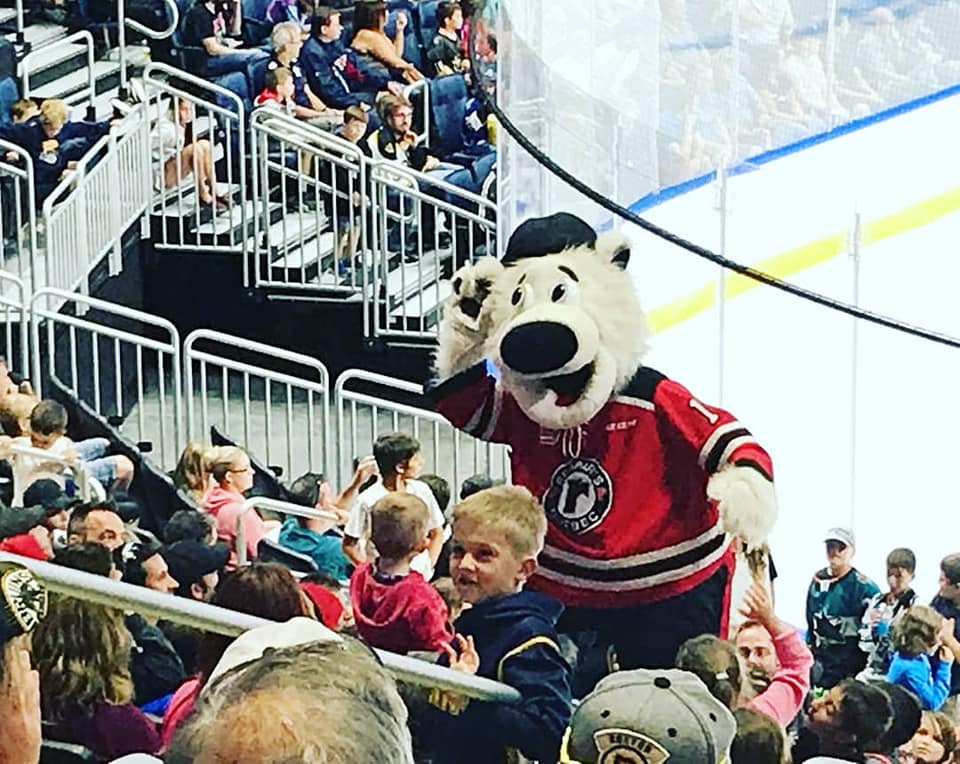 Next to Chateau Frontenac, a constant stream of live musicians play for the crowds, but the best (in my opinion) is Claude Berger! Make sure to keep an ear open for him when you’re wandering around the Place des Armes.

Québec is filled with some incredible cocktail bars and clubs, however for us, the best bars were the live music bars. One favourite for our group was La Piazz on the Grand Allee, a charming underground bar with a great musician. 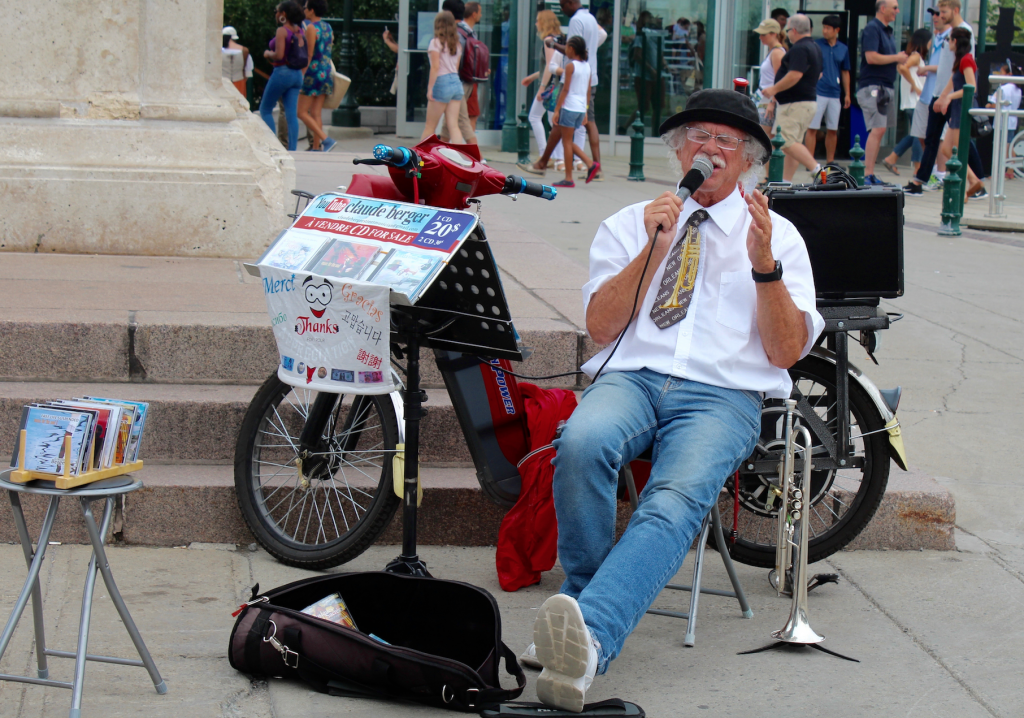 British people are famed for loving to talk about the weather, and it’s true. Our consistently overcast skies make us yearn for something unusual, something different. Québec has all the sun you could ask for in the summer and flurries of perfectly white snow in the winter. Whether you want to wander around on sunny days in the parks, go on summer hikes to waterfalls or go skiing, ice skating or even sleep in an ice hotel, Québec has it all!