In the North of Madrid, between the two gateway towers, under the busy roads and beneath the hustle and bustle of people, lies an old water cistern.

The huge dark hall of brick arches is filled with macabre treasures of gold and jade, painted with iridescent plumage; which lie side by side with Medieval swords, grotesque paintings of battle scenes and intense Christian imagery. 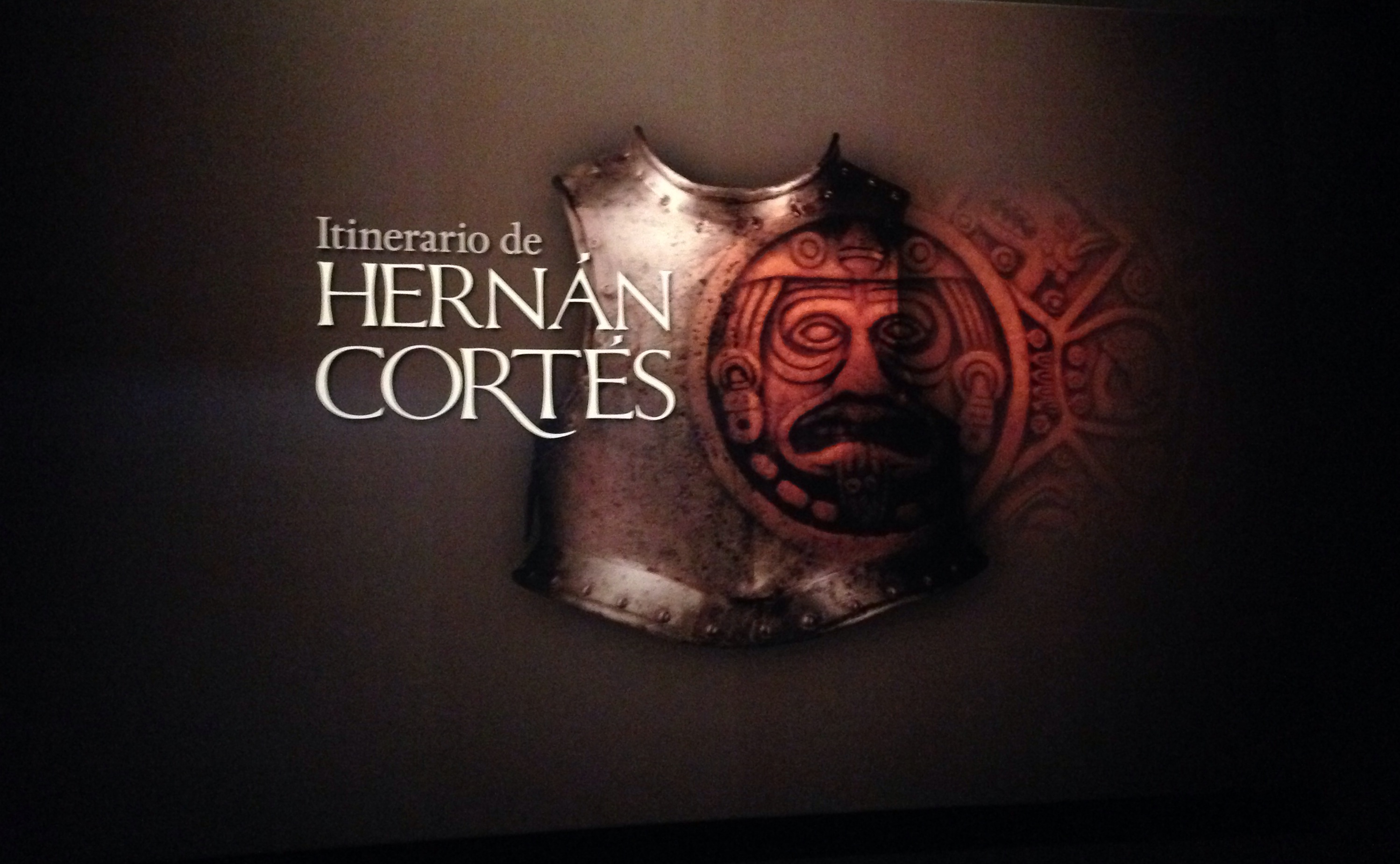 This is the Cortés Exhibition at the Fundación Canal in Madrid (3 Dec 2014 – 3 May 2015). The first major exhibition about the journey of Cortés
from a small town in Badajoz in Spain to the great Aztec city of Tenochtitlan.

Little is known about Cortés – the man who orchestrated the fall of the Aztec Kingdom. He was sent on an exploratory mission to Mexico by Velazquez which was cancelled at the last minute due to bad blood between the two. The ambitious nobleman however ignored this command, sailed his men to Mexico and sunk his ships so that they could not desert him, before marching them across deserts, around volcanoes, over plains, and through battles of blood and death to the great city in the water. 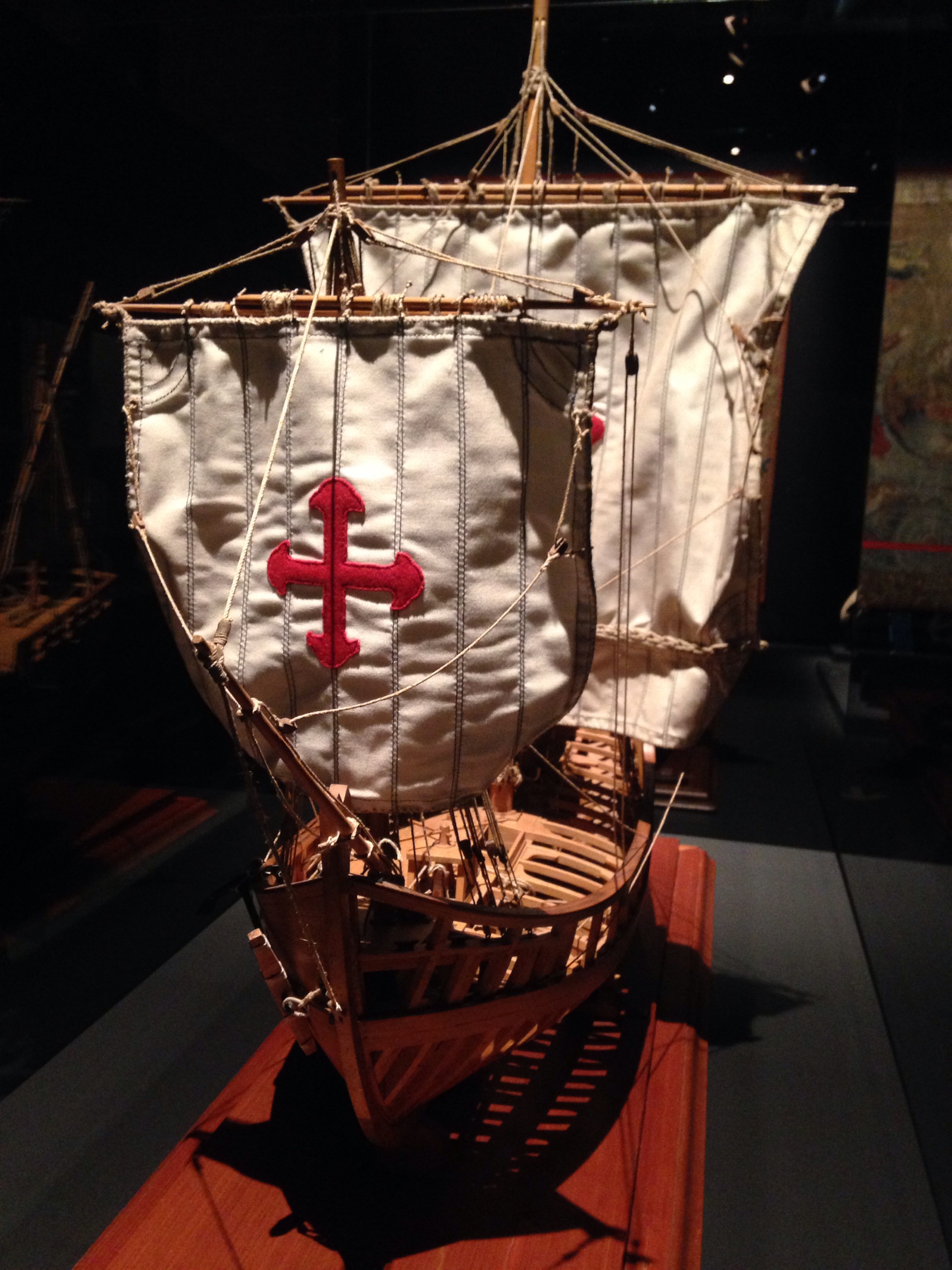 The exhibition is beautifully designed, I don’t think I’ve ever been to a temporary exhibition so carefully thought out. However the plot line is a little patchy. We started off with a history of empires – Greek, Roman, Phoenician, Arab – the lands they explored and the people they conquered. I’m not entirely sure what purpose this extended introduction served, if only to point out that the Cortés was not the first to covet his neighbours land.

It was fascinating however to look at the evolution of the maps from a flat world view to the realisation that the world was round, and the visualisations of the journeys the various explorers undertook across the wide, scary seas. 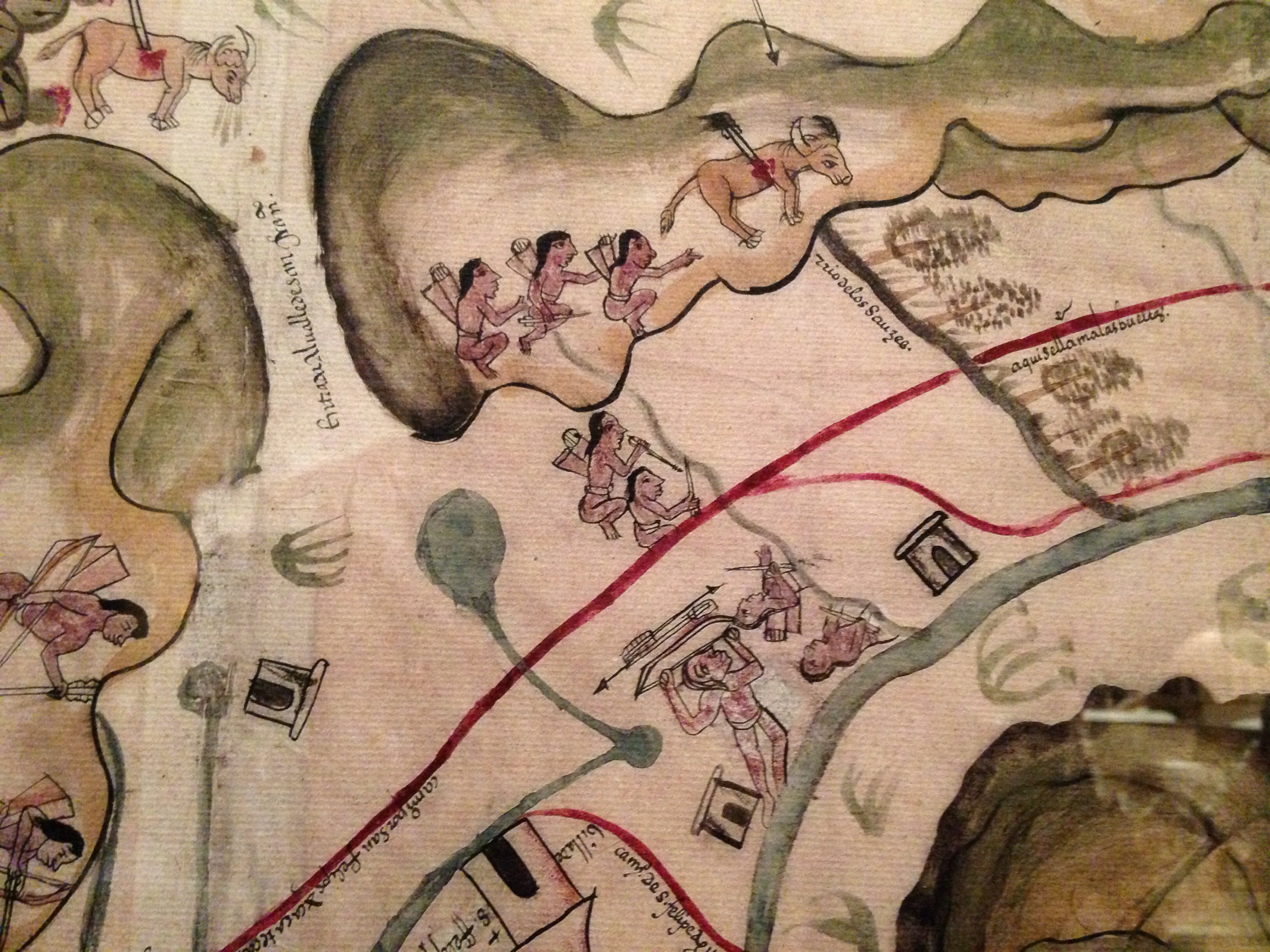 After a quick spin around Medieval Spain, we wandered down a long dark passageway inside the skeleton of a ship. On either side of the ship, a video wall showed the waves rage and howl as lightning and thunder struck and strange sea creatures jumped out of the water.

At the far end of the ship, back on ‘dry land’, a beautiful headdress of blue and green exotic plumage adorned the wall, we were now in the New World. 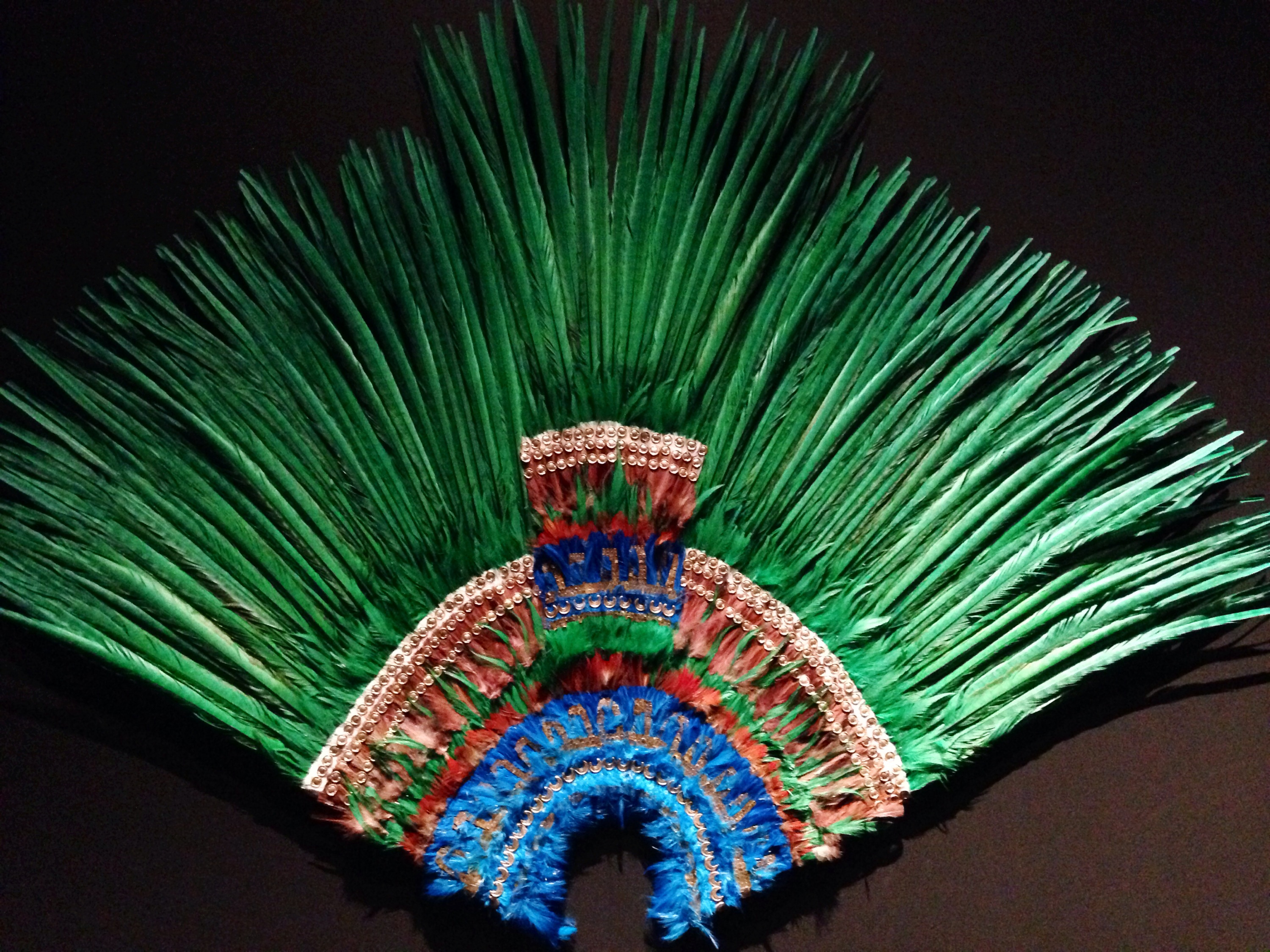 I love the song of the mockingbird,
Bird of four hundred voices,
I love the color of the jadestone
And the intoxicating scent of flowers,
But more than all I love my brother, man.
Nezahualcoyotl, Aztec poet

The next few rooms were dedicated to the Aztec people… 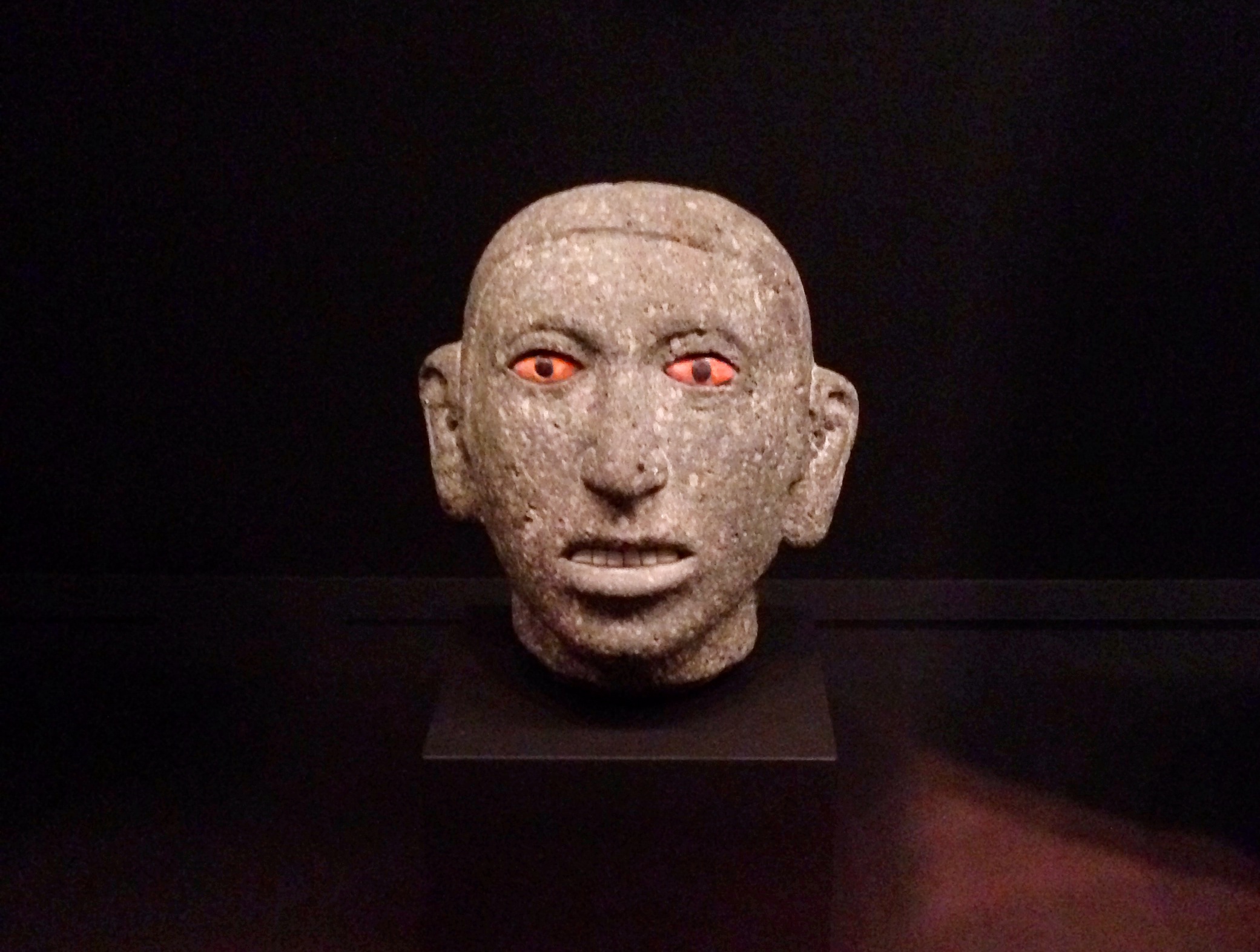 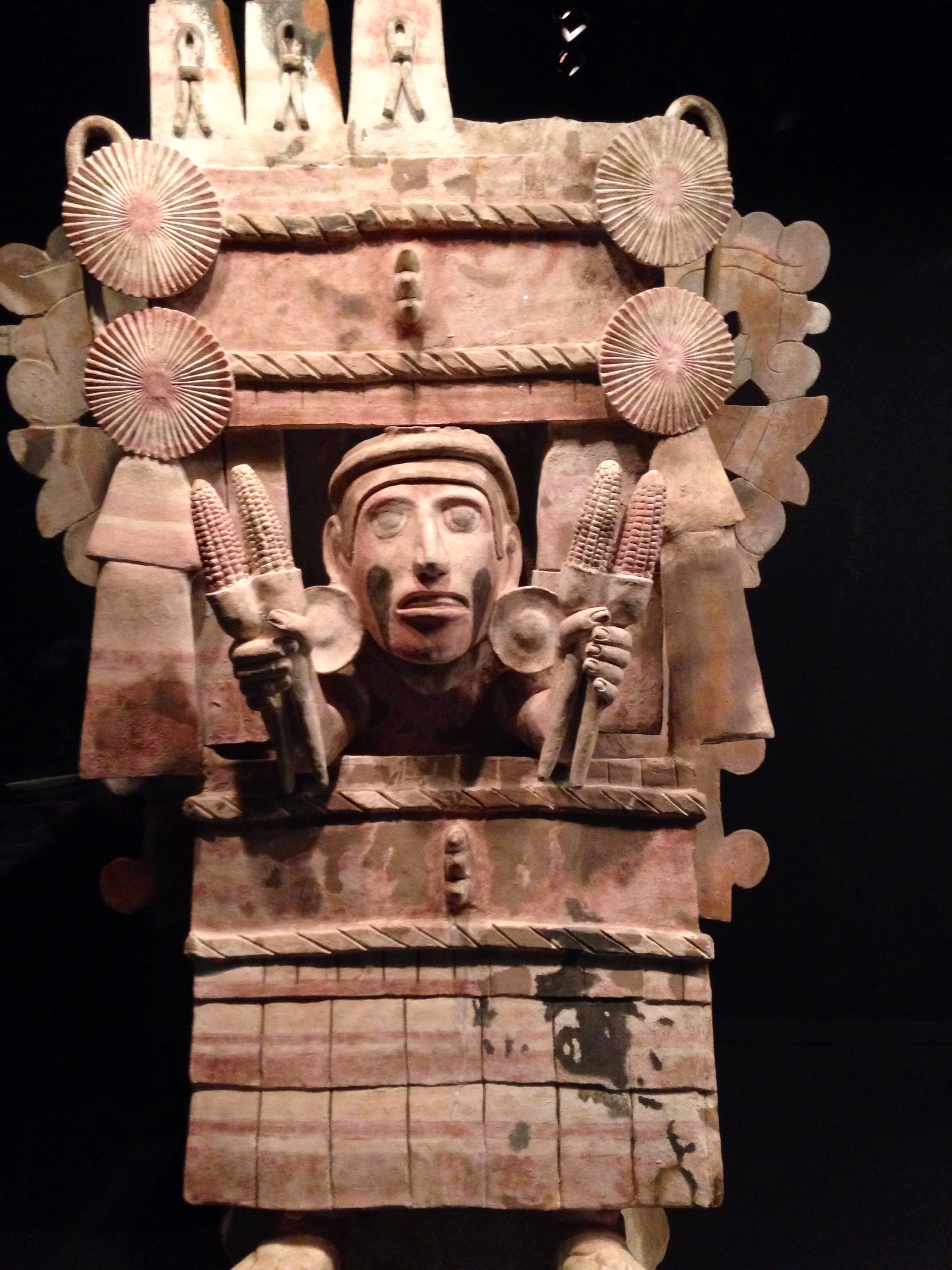 As we walked among the beautiful artefacts, a slow, steady drum beat sounded, taking us back to the world of the Aztecs. 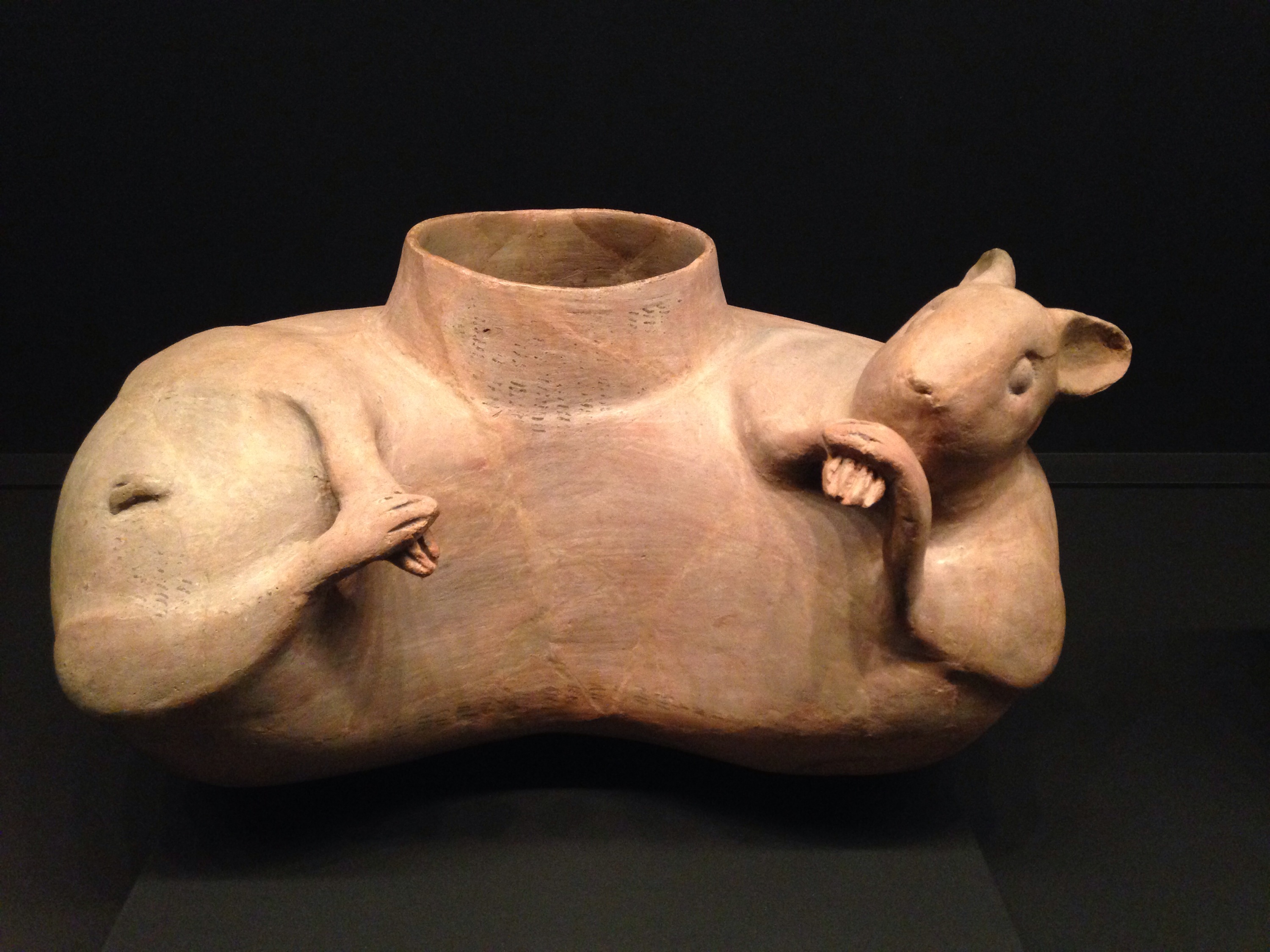 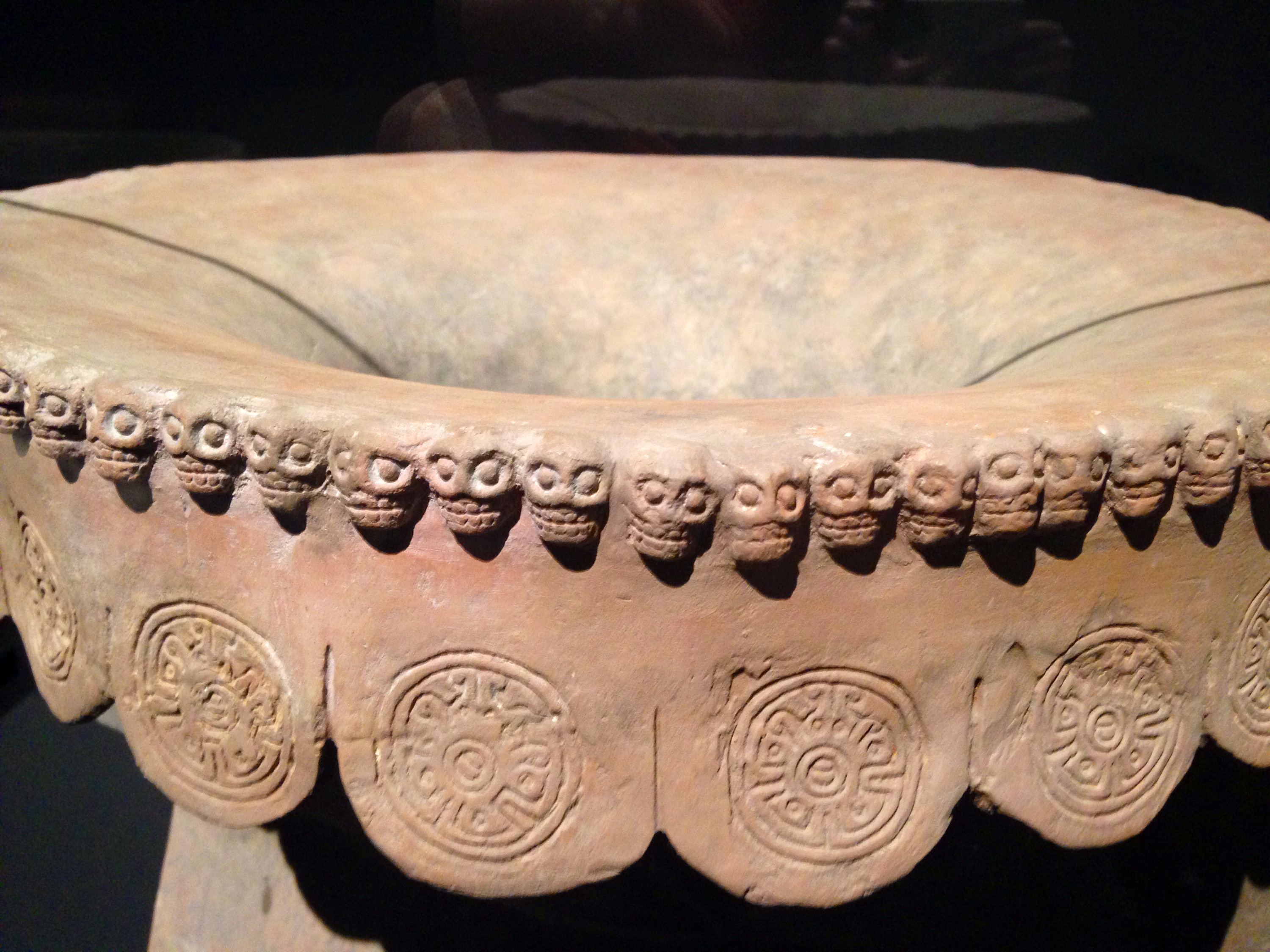 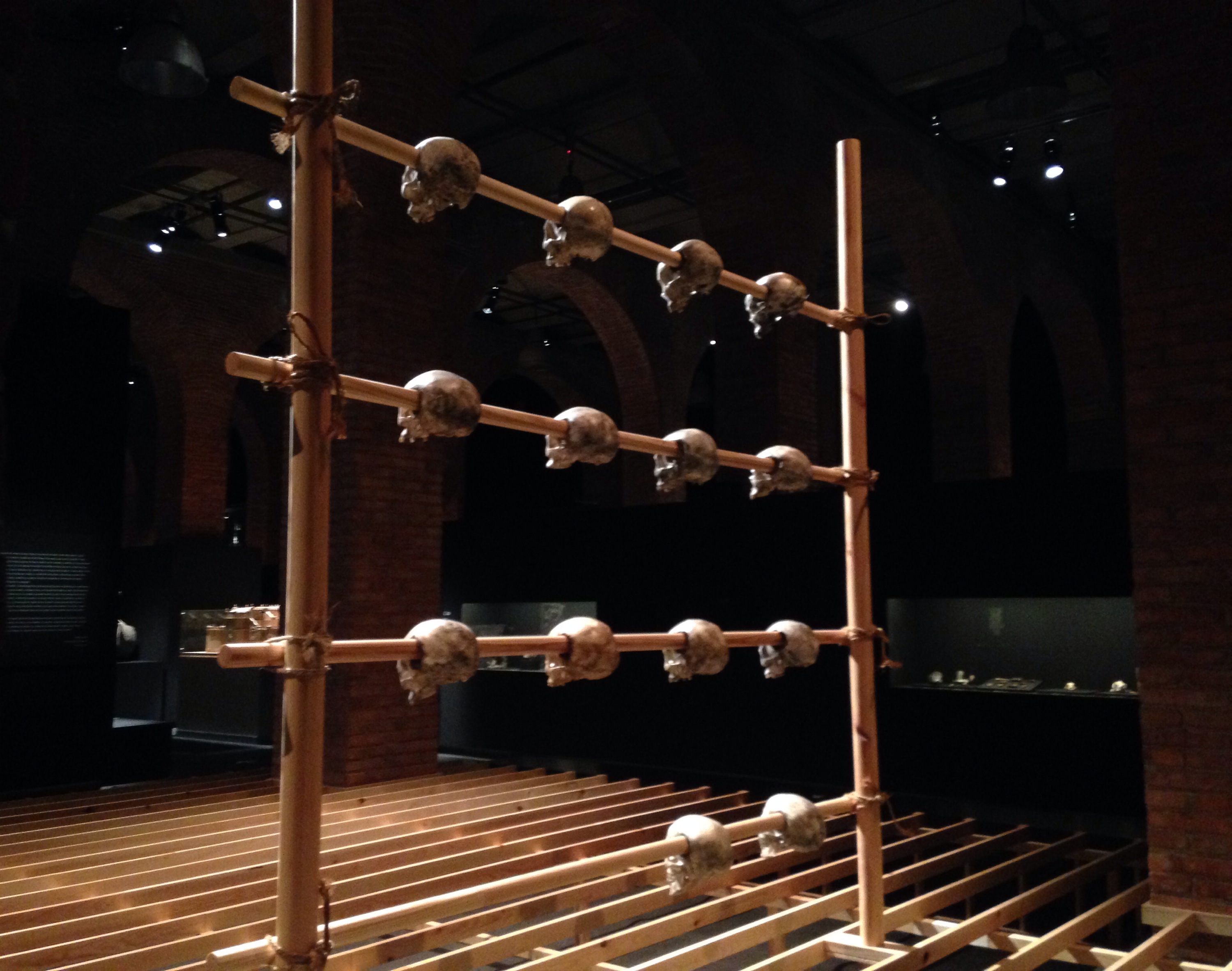 Among the paintings and stone sculptures, a lone warrior stood poised, armed with a spear and brightly coloured shield. His body covered entirely with leopard skin, his head shrouded in the open mouthed head of the wild cat crowned with green feathers, it’s dead eyes replaced with jade stones. The wax statue was so real, standing there in the dark room, I had to turn around to check it hadn’t moved! 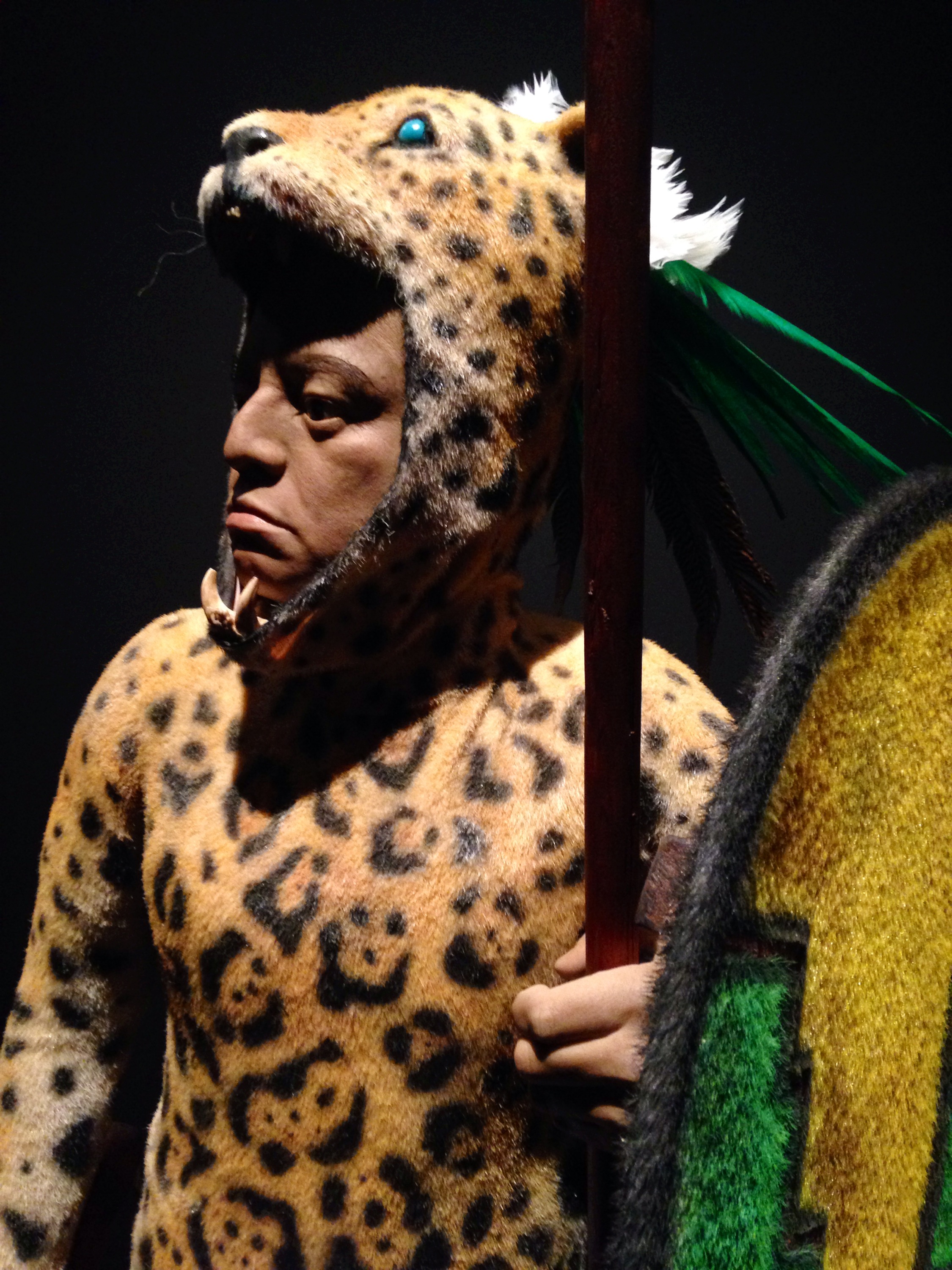 In order to win the honour of wearing the leopard skin, a warrior had to capture 10 enemy soldiers alive in 2 consecutive attacks – no easy feat! There were different animal outfits for different levels of warrior.

One of the crowning pieces of the exhibition was a small golden mask – a pendant of the god ‘Xiuhtecuhtli’, the Turquoise Lord or Lord of Fire. He was the god of fire, day, heat, volcanoes, personification of life after death, warmth in cold, light in darkness and food during famine. So basically he was the god of all needs. 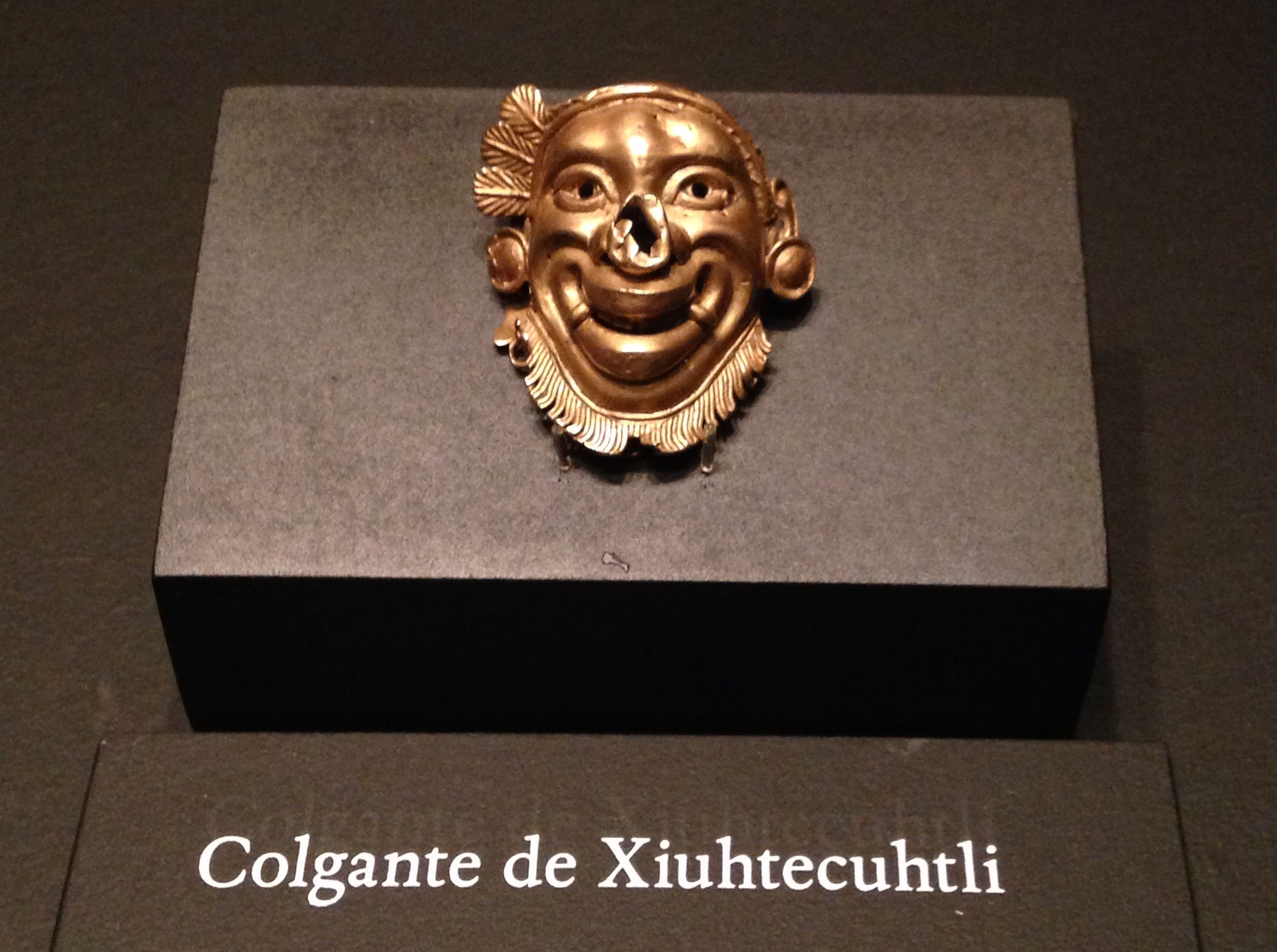 I really loved this black onyx mirror, unshined here, so it’s not reflective, but I felt that added to its sense of mystery. 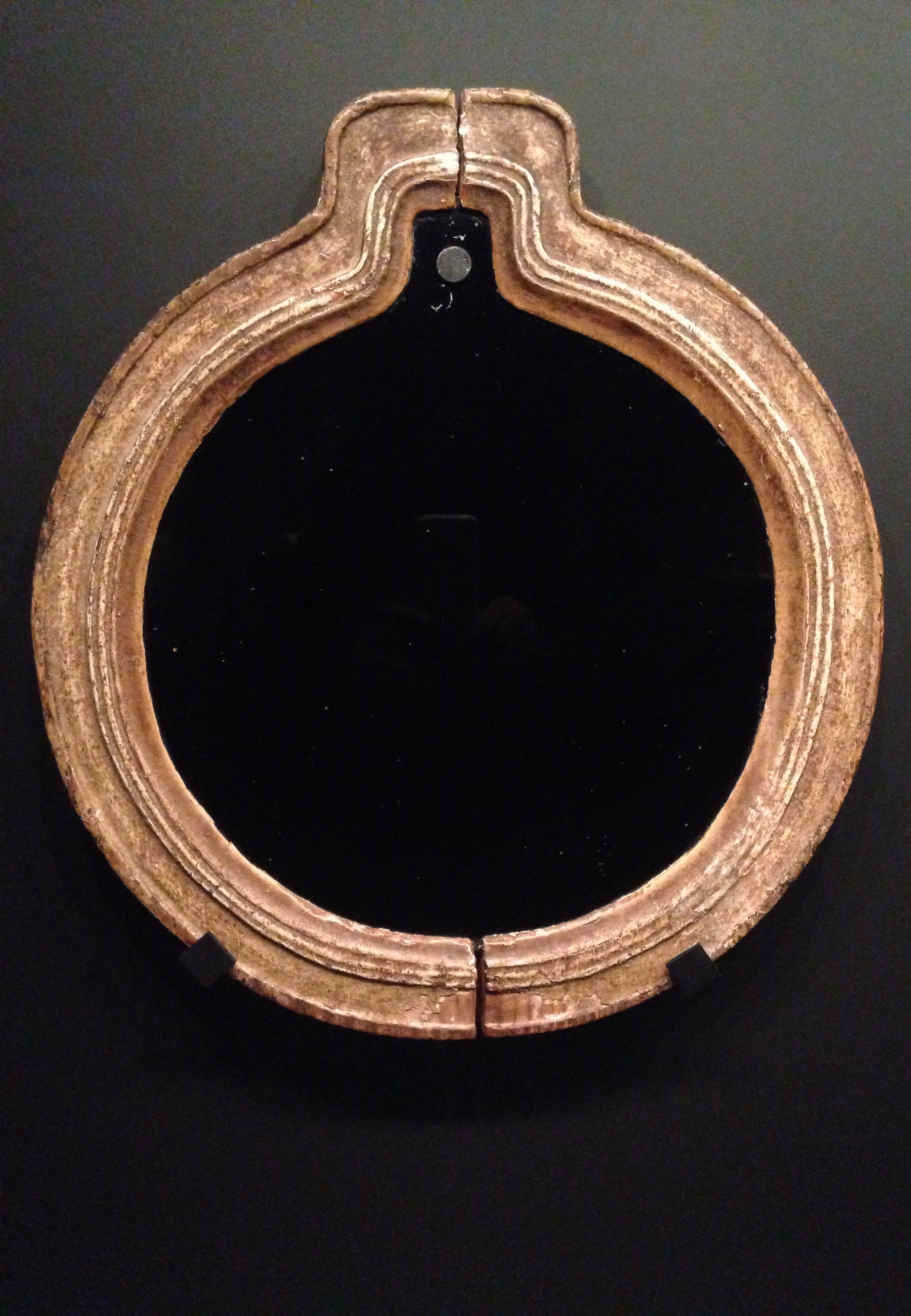 We made our way once more through another corridor in the hall, this time we were surrounded by leaves and the sound of the jungle pulsated in the air. Like the Spanish explorers before us, we made our way through the jungle of Mexico, allied with neighbouring tribes and finally mounted a successful attack on the great watery city of Tenochtitlan. 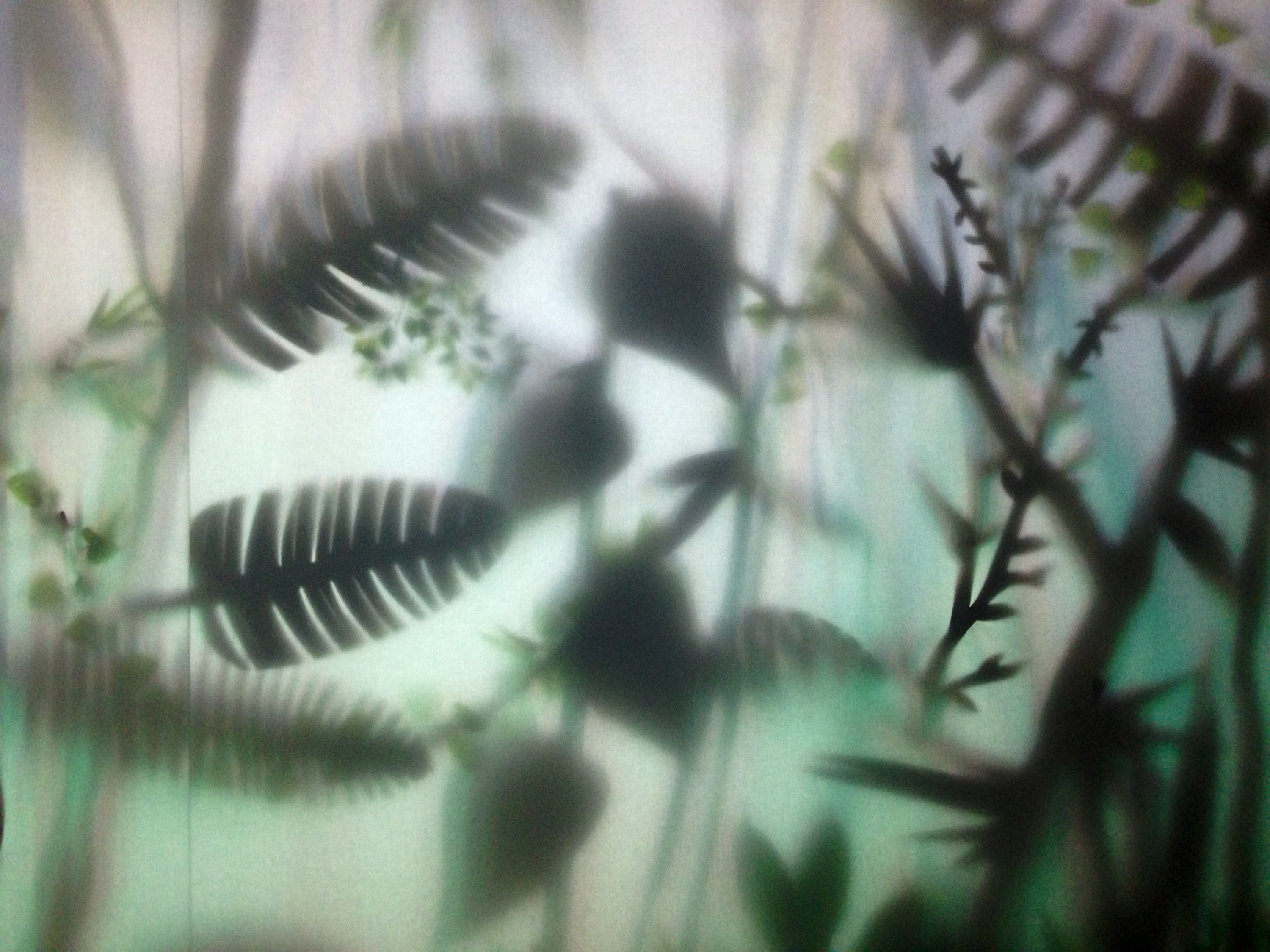 From then on, the art changed significantly. Gone were the skulls and the bright, vibrant colours. They were replaced with religious iconry and statues. 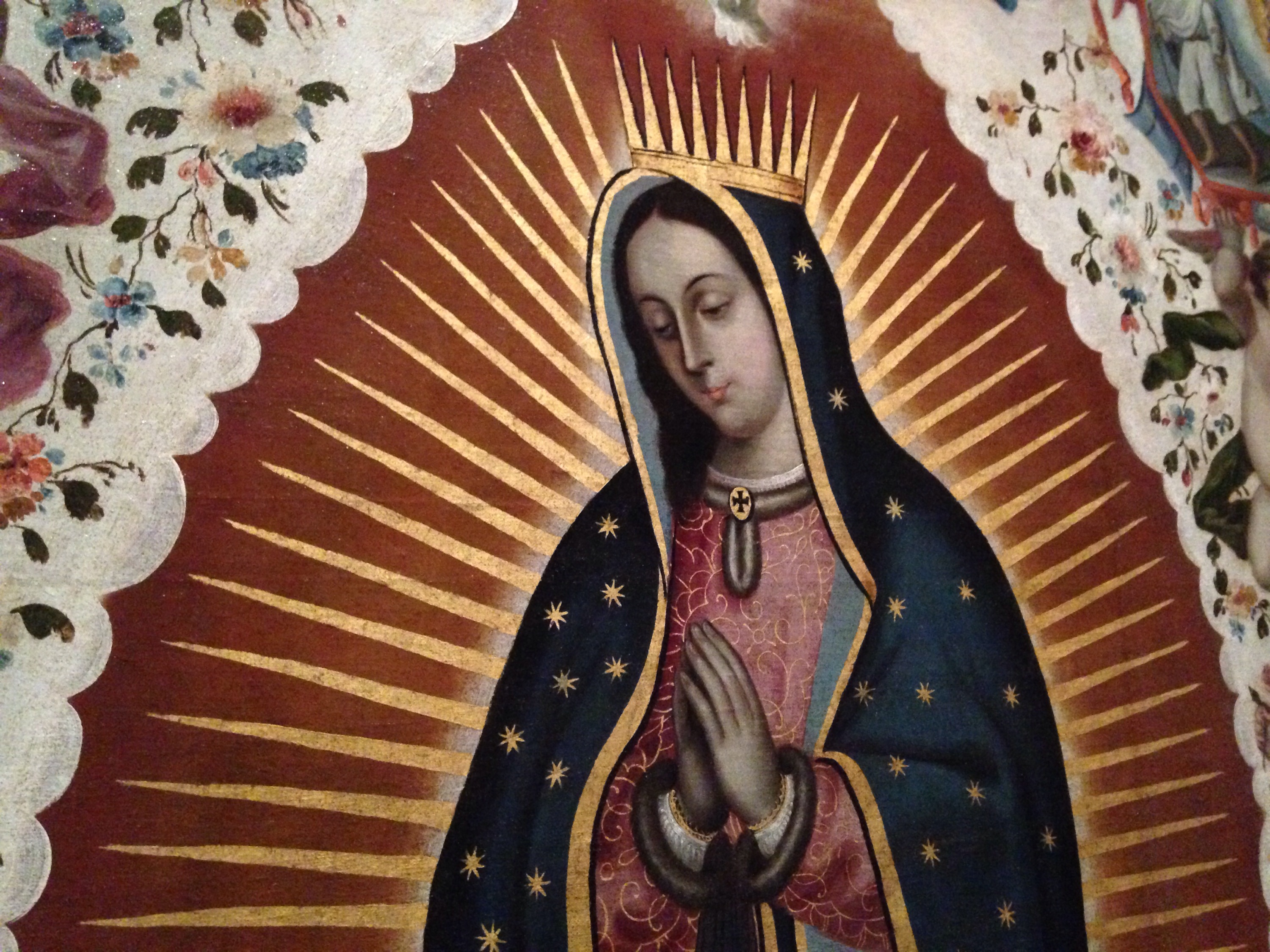 I have to say that I prefer the style of the Aztecs. 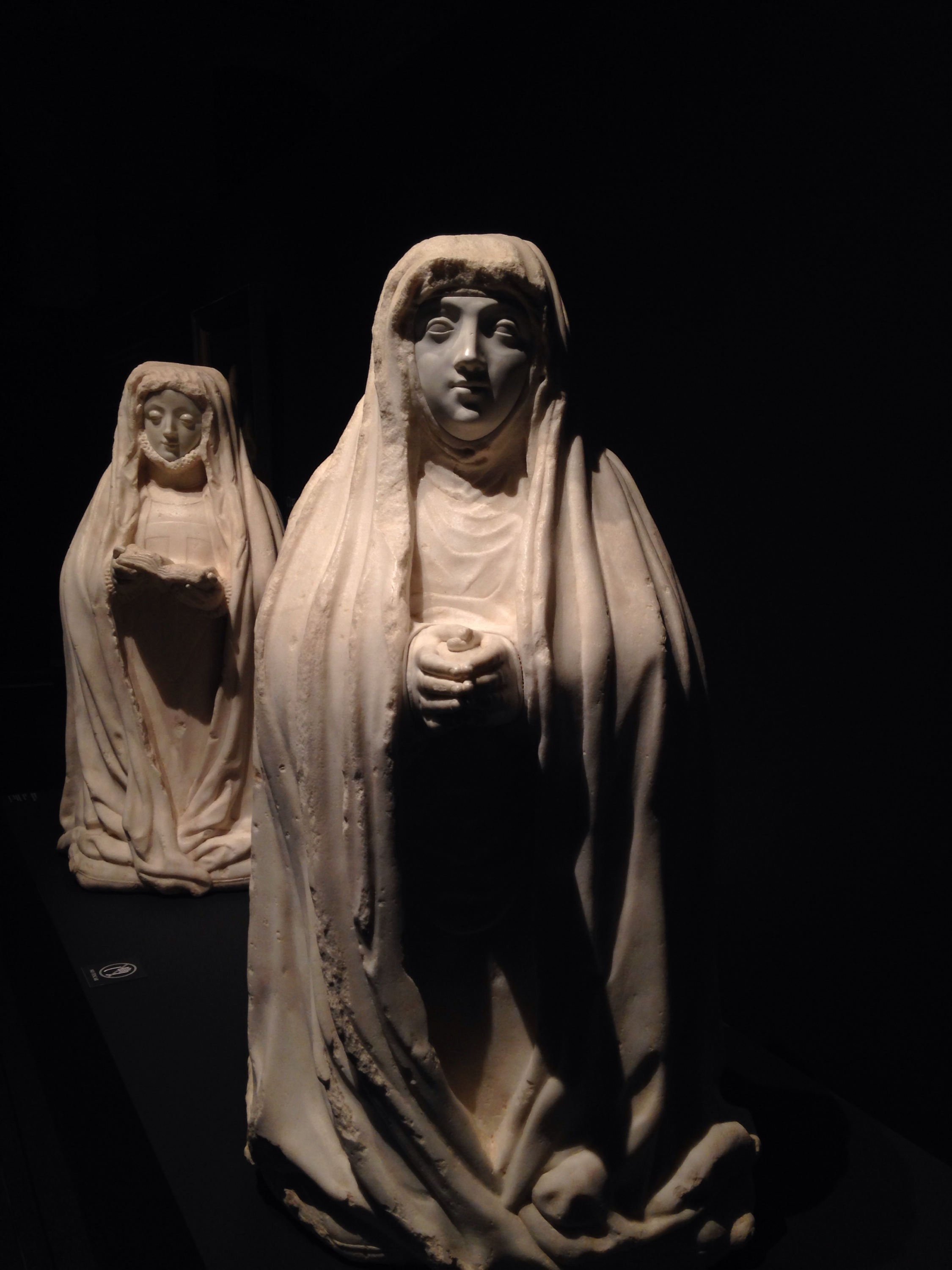 Though some pieces retained a distinctive Mexican style. I was particularly drawn to this portrait of El Conde de Galves (and not just because of the horse!) 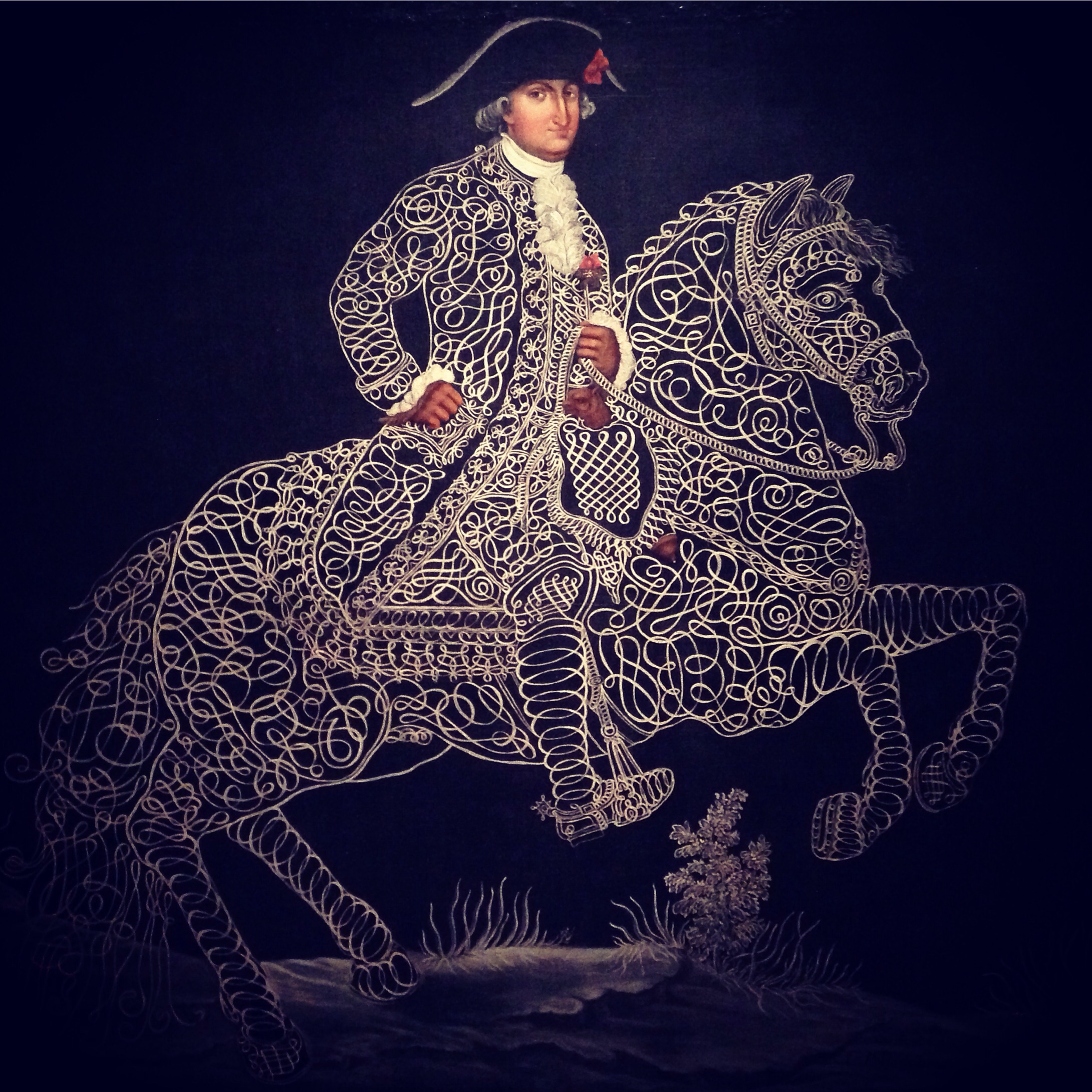 The New Mexican society was ruled by a strict caste system, with names for every mixed breed of person – half black, half white, half ‘Indian’, half mestizo… The list goes on. A lot of the names seemed to be related to wild dogs (with Coyote and Wolf being two of the potential slurs!) 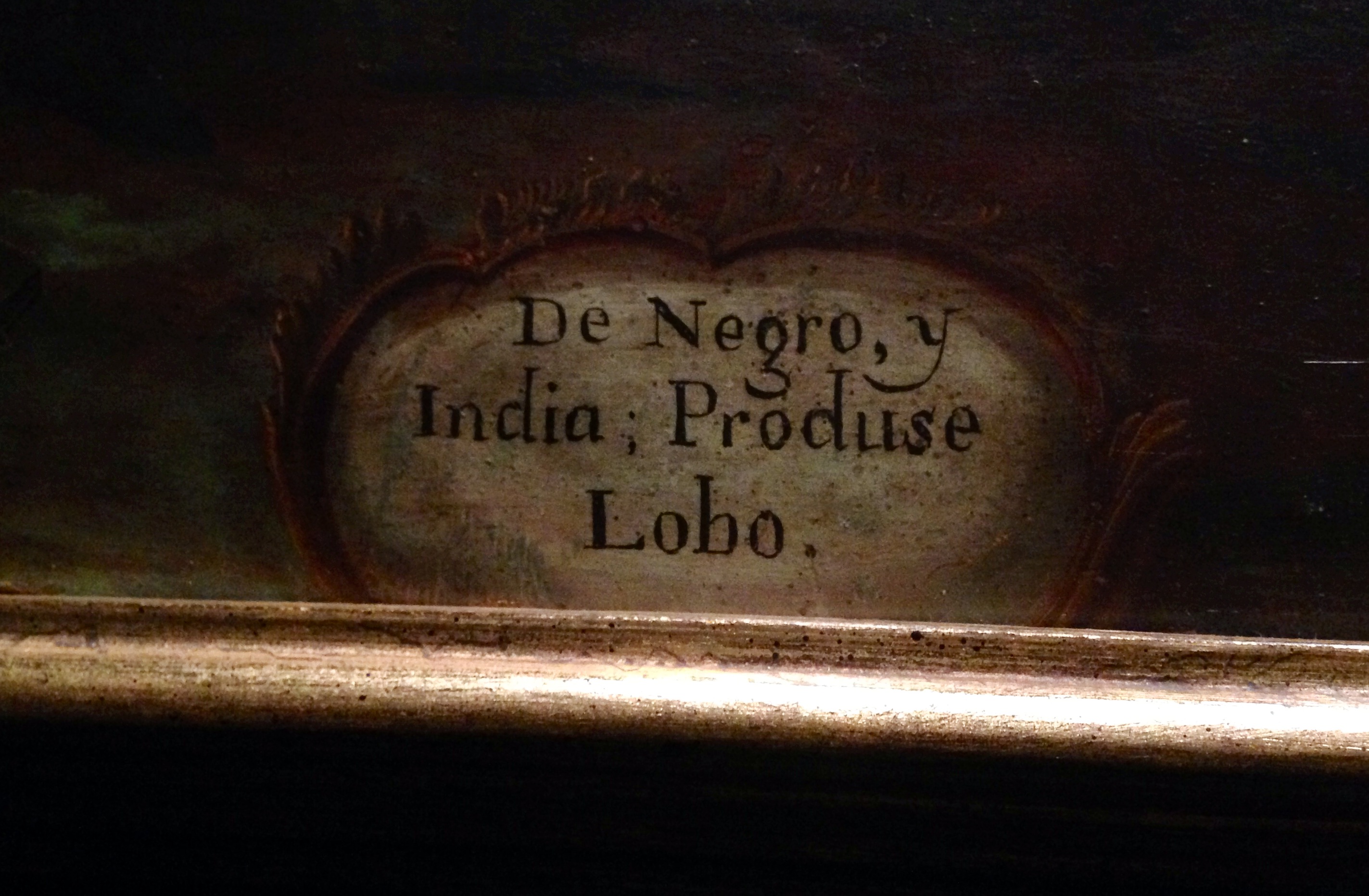 The caste system stung Cortés too. After all his efforts in bringing Mexico under Castilian rule, Cortés was disappointed with his title of Marqués de Oaxaca. The better title of Viceroy was given to a higher born nobleman, Antonio de Mendoza. The embittered Cortés spent some time exploring Baja California before returning to Spain.

In debt and angry at his lack of status, he approached the Emperor’s carriage as it moved through a crowd. He climbed on, to the outrage of the Emperor, who asked who he was.

To which Cortés replied..

‘I am a man who has given you more provinces than your ancestors left you cities.’

A curious little window into the life of a man people know little about. Definitely worth a visit I’d say!