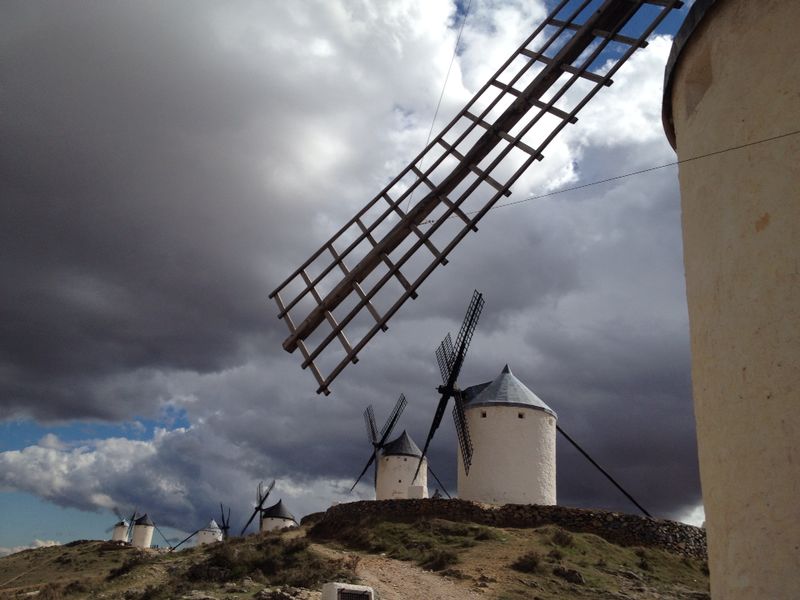 The windmills of Consuegra

When I think of Spain, my home for countless years, I have an intense longing for the gnarled olive trees with silver leaves and the bone dry, rust red earth. It is my favourite kind of wilderness – harsh and battered by the wind, with miles and miles of empty plateau to explore. A lot of people don’t see the beauty of it, but my heart sings every time I fly home and see the golden, parched land stretching out for miles beneath me.

Castilla La Mancha is a perfect embodiment of that type of Spain, in fact La Mancha actually means ‘the dry’! It holds a number of jewels to visit which are often lost within the vast expanses of unknown territory.

Tembleque is a small town that one would only stumble across by accident unless you were actually looking for it. Quiet and sleepy yet at the same time intensely beautiful and grand! 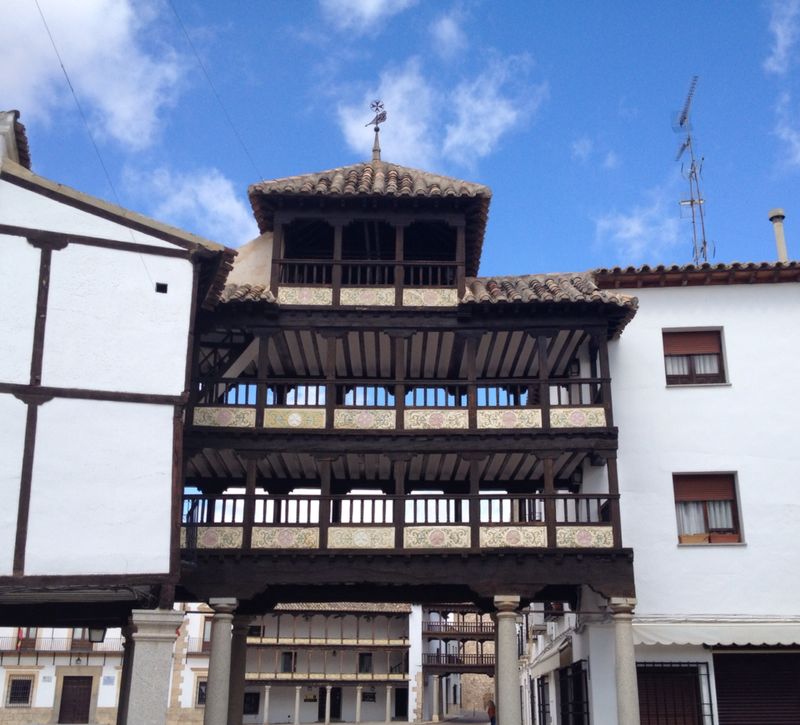 The best part of this town in my opinion is the Plaza Mayor which boasts the prettiest wooden balconies I have ever seen (perhaps even prettier than Chinchon, which up until now was my favourite!) The Plaza has two entrances under the balconies which continue all the way around, and are topped by a little tiled roof. The one thing this plaza is missing however is a bit of life (or vida!) It could definitely do with a few more restaurants or bars to fill the large sandy area with noise and people and laughter. 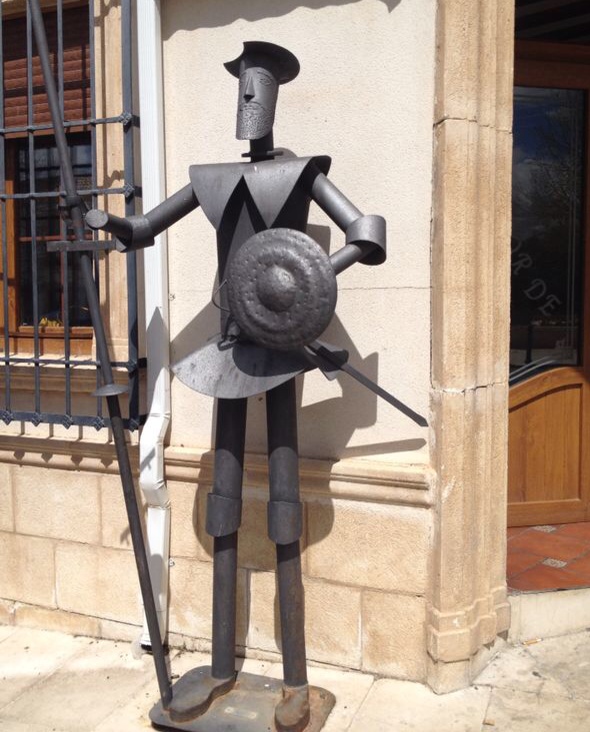 Luckily, the one little lonely restaurant – Mesón Venta de Tiembles – is absolutely delightful! I strongly recommend sitting outside on the terrace under the wooden beams and the leafy green ivy to soak up the sun and the atmosphere. 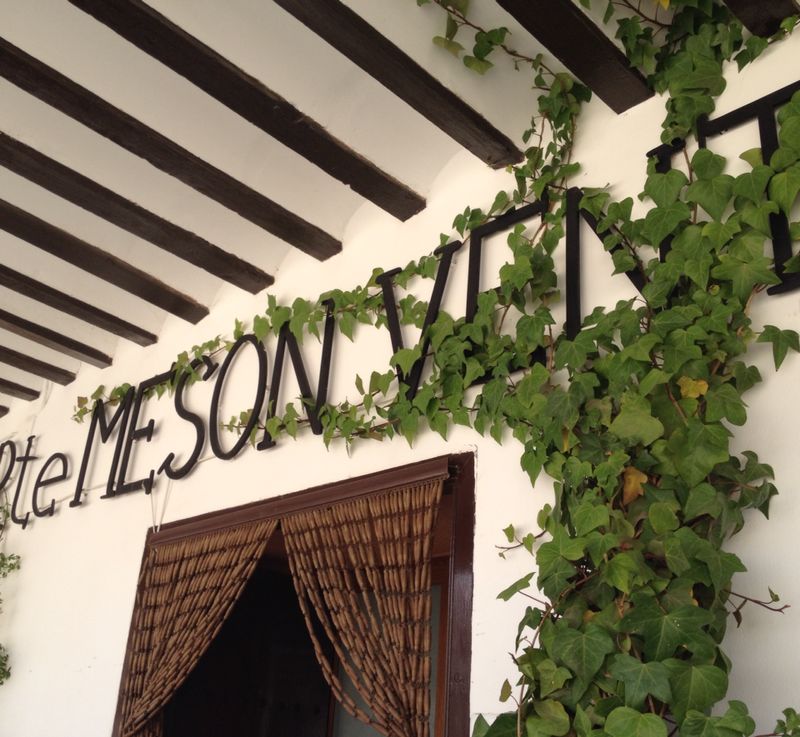 The food at this restaurant is incredible. It can often be hard to find good Spanish food in Madrid, yet I find that small places in almost unknown villages seem to serve meals fit for a king.

I recommend trying the patatas bravas which come with a home made sauce which is to die for. The croquetas are also very good too, as are the gambas al ajillo (prawns friend in oil with garlic and dried red chillies). I really wanted to try some more dishes, especially the venado con salsa (venison with a richly spiced tomato sauce), but I guess it’s a good reason to go back! 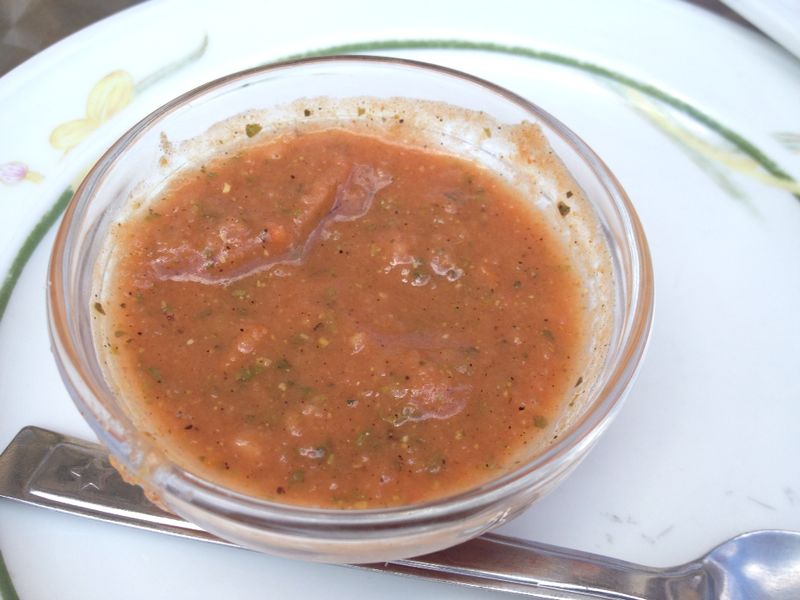 Overall this sleepy town is well worth stopping off at for some tapas on your way out down south, wherever you may be travelling to! It will take you back to another, older era which is so hard to find these days in bigger cities. 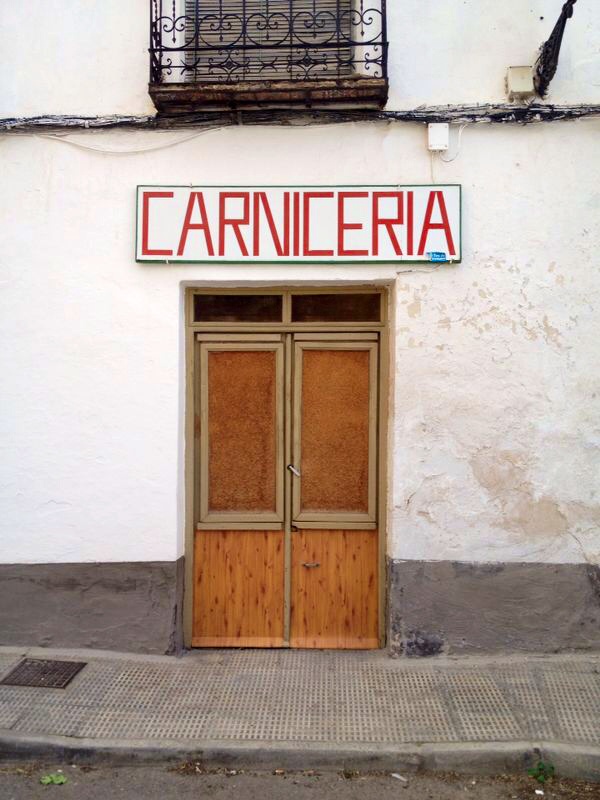 The main roads in Spain are lined with black Osborne bulls, the unofficial national symbols of Spain, designed in 1956. They were originally giant adverts for Osborne Brandy de Jerez, however following the law in 1994 prohibiting all roadside advertising they were fated to be removed. The bulls were so loved by the Spanish people though that the court allowed them to remain, on the grounds that they have both a cultural and aesthetic significance. The original red branded text was blacked out and they are now imposing companions to look out for on the long flat roads! 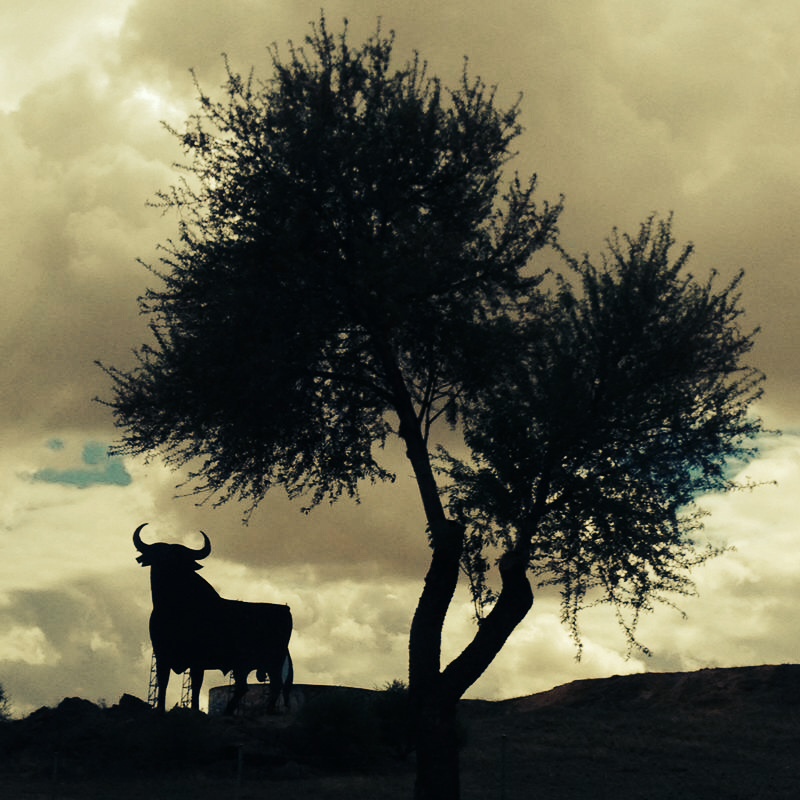 The next stop was Consuegra, probably one of the most dramatic and stunning places I have been to in Spain – yet it is curiously still somewhat unknown to tourists.

We headed straight for the castle and the windmills – we couldn’t help it, they’re so mesmerising! The castle was destroyed in 1813, but was partially reconstructed in the 60’s to show what it would have been like before. The most interesting part of the castle in my opinion was the water storage room, painted with an iron infused red paint to help prevent the water from leaking. Water storage was very important in a place like Castilla La Mancha, especially if the castle were to be besieged, due to the utter lack of rain. The techniques of water storage were introduced by the Moors, and in fact, records show that a fortress on the same ground was originally built by Almanzor, the ruler of Muslim Al-Andalus.

The castle was later home to the Knights Hospitaller, a Christian military order in the Middle Ages who were charged with defending the Holy Land. Their emblem can be found outside the castle near the pretty little garden filled with olive and cherry blossom trees. 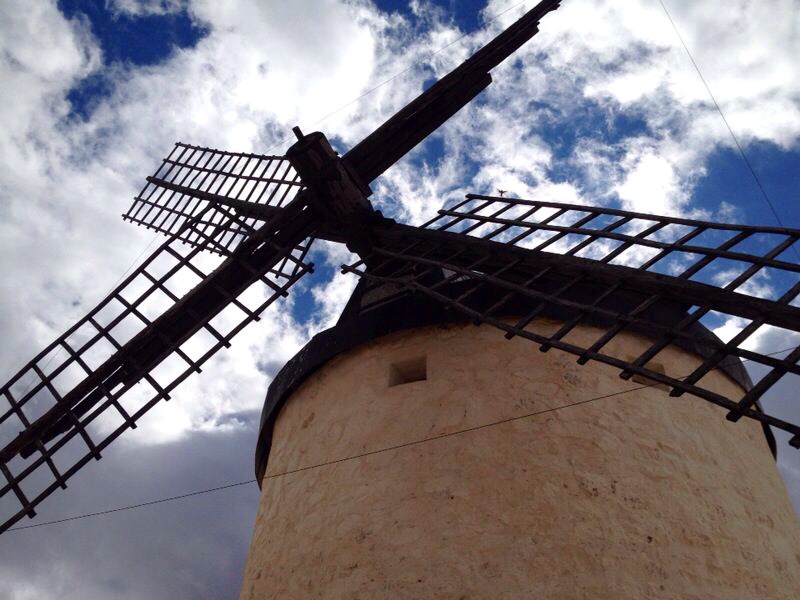 We walked from the castle along the ridge, admiring at the gleaming white windmills and losing ourselves in the wild and stormy views of the flat meseta.

Only 12 of the original 13 windmills remain, the names (some of which are the original names, some have changed) are as follows:

Clavileño (name of a wooden horse in the novel Don Quijote), Chispas (sparks), Espartero (a person who makes wares of feathergrass), Rucio (grey), Cardeño (purple), Caballero del verde gabán (the gentleman with the green coat), Alcancia (money box), Ruinas (ruins), Sancho, (a character from Don Quijote – it also means pig!) Mambrino (a fictional Moorish king who had a helmet that rendered the wearer invulnerable) and Bolero ( a type of music and associated dance). I love the fact that the windmills have names, it certainly brings them to life! You can buy tickets to go into a couple of the functioning windmills and have a look around; others that are no longer working are open so you can wander in at will, as my dog eagerly did! 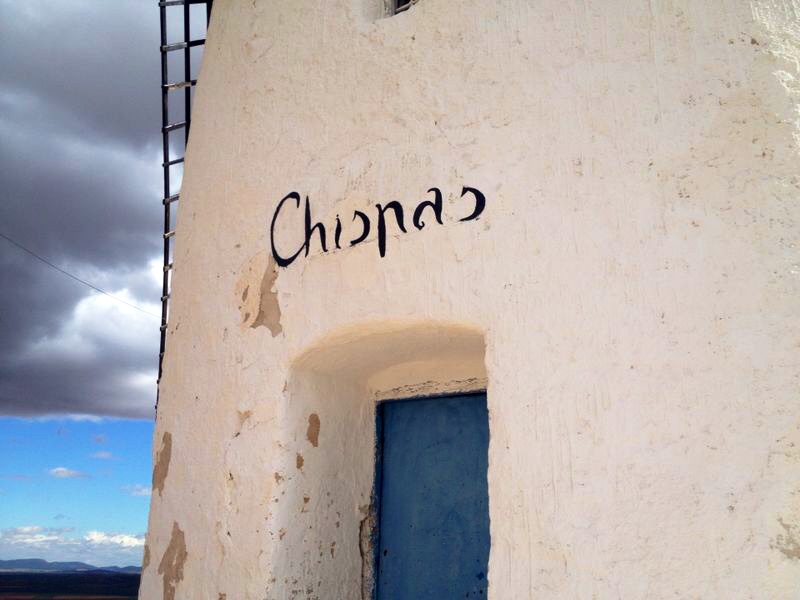 If a mountain ridge lined with charming windmills and a half ruined castle isn’t enough for you though, Consuegra has even more to offer! A number of churches litter the town. The Iglesia de San Juan Bautista (1567) was built in the mudéjar style – this unique type of architecture is a beautiful blend of the Moorish and Christian influences in Spain.

The Plaza de España was originally the old Roman forum where people would gather and today it is still the buzziest place in town although it has unfortunately been a little over restored. Most of the buildings lining the square are disappointing, save one – the building of Los Corredores (17th century) was the original Ayuntamiento (city council). The building has a traditional manchegan feel with wooden balconies and it is now home to the archeological museum which has objects from the Neolithic period all the way through to the 19th century. It is open from Thursday to Monday from 11.30 to 14.00 and again from 15.30 to 19.00. 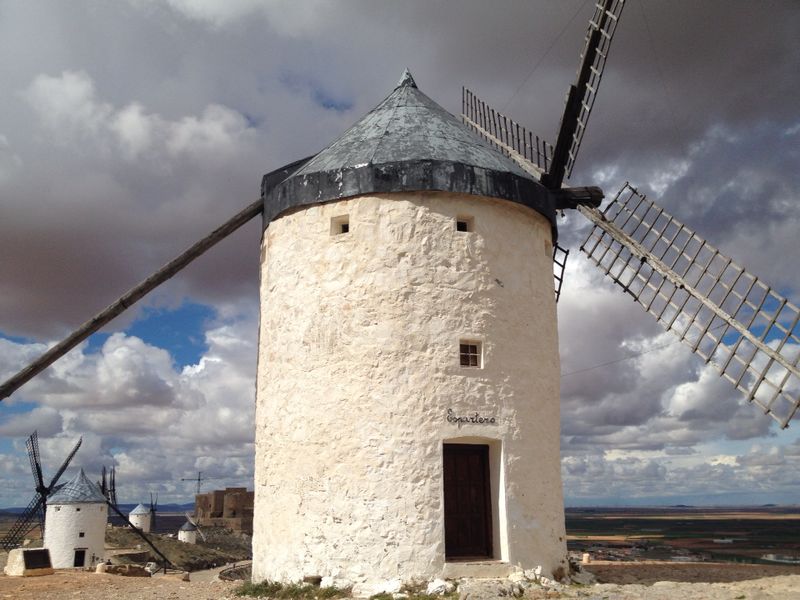 There is also a Roman dam which is, according to the tourism brochure, one of the best examples of a still intact Roman dam in the world. However, we drove around in circles in vain trying to find it. I would strongly recommend getting very precise instructions from a local before seeking it!

If you haven’t eaten yet and are looking for a place to relax with a cool drink after hiking in the heat, I would strongly recommend Los Patrizios. I can’t vouch for the food as we had already eaten in Tembleque, but the internal courtyard is a cool little oasis of green tranquility in a hot and dusty desert.

If you would like to coincide your visit with a fiesta – there are two of particular interest in Consuegra! On the 15th August, to commemorate the Battle of Consuegra, the town hosts a symbolic re-enactment of the medieval battle in which the son of the famous El Cid died. Every year the battle between the troops of Alfonso VI and the Berber tribes of Yusuf Ibn Tasfin is played out on a giant chess board and is followed by a mass and a macabre dance to remember the dead hero. 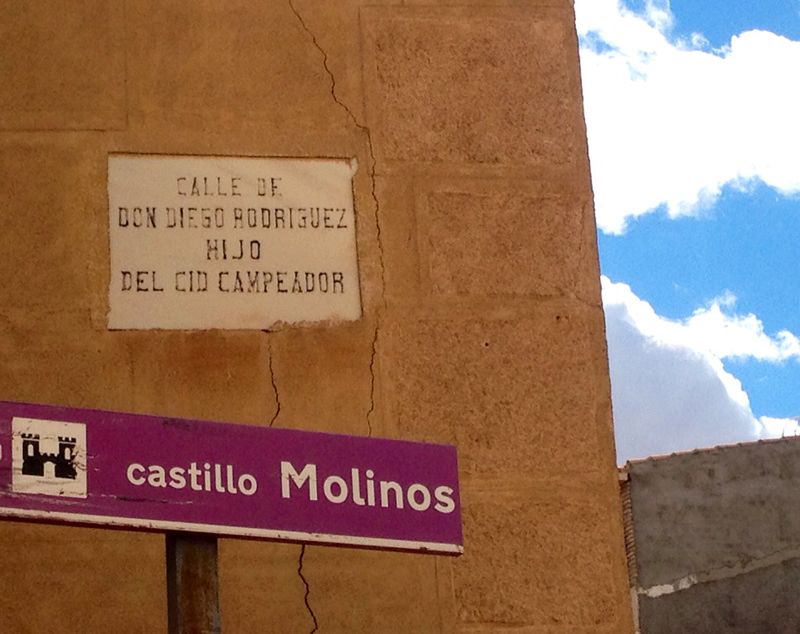 During the last weekend of October, the fiesta de la rosa del azafrán is celebrated, which has been declared to be of particular interest. Many different activities take place during this festival, including the grinding of wheat in the windmills and a very unusual saffron competition where the person who can extract the most saffron wins!

Castilla la Mancha is an exceptionally beautiful and wild place that embodies the spirit of the Spanish meseta and also the novel Don Quijote – the Man of La Mancha! If you aren’t accustomed to the heat I would recommend a spring visit as during summer (August in particular) central Spain transforms into a furnace! My trip was at the beginning of April – it was both a hot and cloudy day –  perfect really, as the looming black thunderous clouds added a dramatic edge to the scenery!

I really can’t wait to go back! 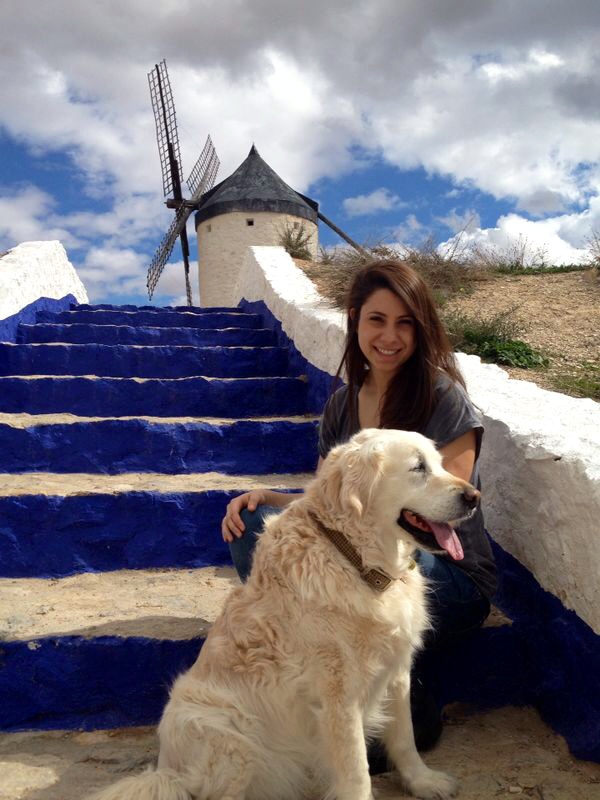 Overall, one of my favourite days out! Tourism in your own country can sometimes be the best!