On a quiet crescent row in West London sleeps a small little pub called the Heron. You wouldn’t really notice it unless it was your intended destination.

Down some shabby stairs and into a tiny little room filled with the strangest assortment of lamps, mirrors and a rainbow of multi coloured seats. There are only 6 or 7 tables 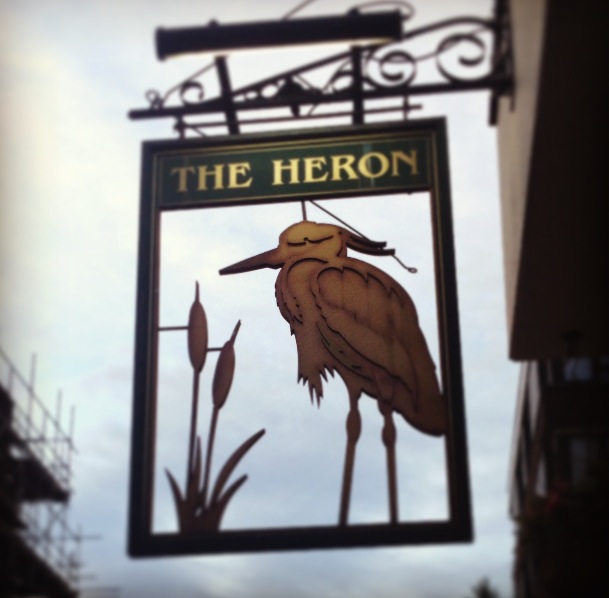 so it feels very intimate and personal. 2 large flat screen TV’s show video clips of Thai pop singers and the Thai waiter greets us with a ‘sawadee kup’. So far so good!
The menu is somewhat overwhelming in length – it is primarily Northern Thai food and there are a lot of options. I tend to be conservative and go with what I already know (partly because I already know I love it, and partly so as not to be disappointed) but I was persuaded to go with one new dish and it was probably the best!
Tom Yum Gai: spicy/sour soup with chicken, mushrooms and lemongrass. I absolutely love tom yum, I loved it in Thailand but i’m always disappointed with it in the UK. However this soup was amazing. Zinging with flavour and ever so spicy, my mouth is watering just thinking about it. It’s a very generous portion too, so def a dish to share!
Kai Krapow: this was my favourite dish in Thailand: minced chicken (or pork) stir fried with holy basil, chillies and fish sauce. This was the only dish of the night that was a bit of a let down. Instead of minced chicken there were whole chunks and the flavours were definitively Chinese, not Thai, though it was still very tasty. 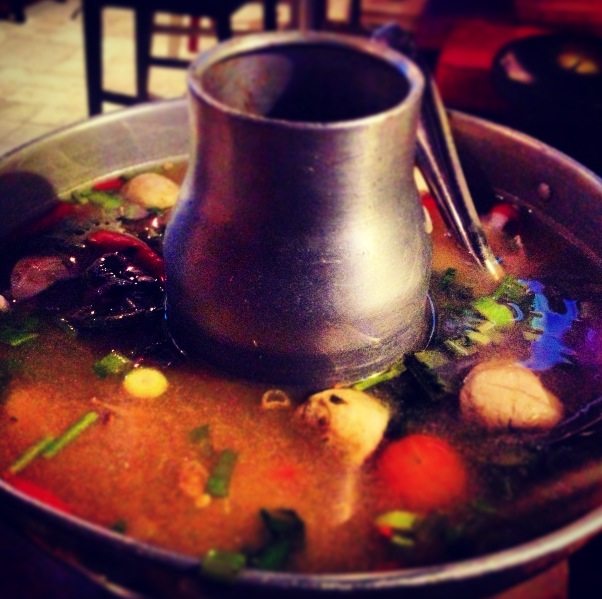 Northern Sour Sausage: this dish was new to me and was accompanied by a delicious egg fried rice with pieces of sausage in as well. Despite the low prices and casual interior, a lot of thought had gone into the presentation of the dishes. The sausages were grilled just long enough to have a brown and cripsy exterior, juicy insides and a smoky flavour. These were sausages unlike any i’d had before with strong notes of lemograss and kaffir lime leaves along with chilli.

We ordered 4 dishes between the 2 of us – it was ok on this occasion as I hadn’t had any lunch so was very hungry, but maybe one too many under normal circumstances. It was hard though to not get carried away when presented with so many exciting options!
2 dishes i’d like to try for sure next time I go: laab moo (minced pork with thai herbs and lime) and the som tam (papaya salad). 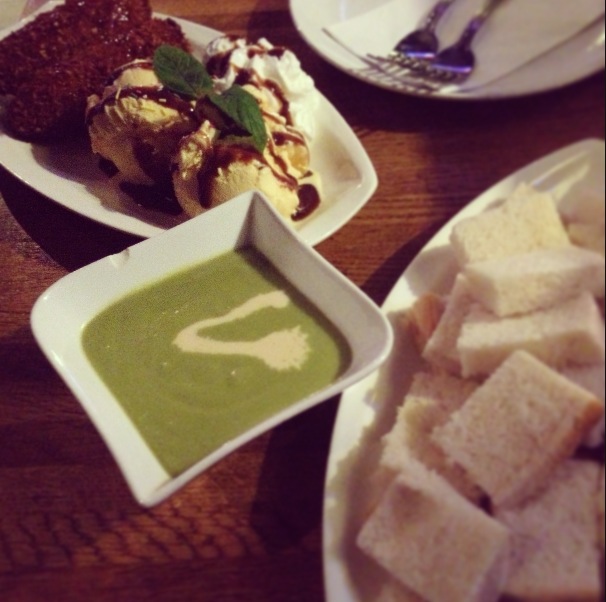 Despite being quite full, we still had space for the delicious sounding desserts!
Pandan custard: a delicious, smooth and velvety green custard. I don’t really know how to describe the flavour of pandan, you just have to try it know. It was served with white bread pieces to dunk in which was a nice idea, however I poured all my custard over the other dessert…
Deep fried Banana with Ice Cream: this is a staple dessert in many Asian restaurants however this was the best i’ve ever had. Honestly. The batter was mixed with grated coconut to make a tasty hard crust, with the hot and almost melted banana encased within.
If you want to avoid the karaoke element, it’s best to plan your meal to finish before 9.30pm – however i’m pretty curious – I might try and make sure my next visit coincides!
Overall I was very happy to have finally trekked over to Paddington to eat here. When I first read reviews of The Heron, the menu was only in Thai and the prices didn’t go over £9 a dish. The menu has now been translated to English and the prices now go up to £19 – so I strongly recommend trying it out before you can no longer afford to!
After dinner we needed to walk the food off and get some fresh air, so we decided to head to the ice rink on foot. At one point we walked past a tiny little road called Bathurst Mews. The entrance was small and fringed with fronds of leaves. Drawn to the magic of the street, we changed direction. 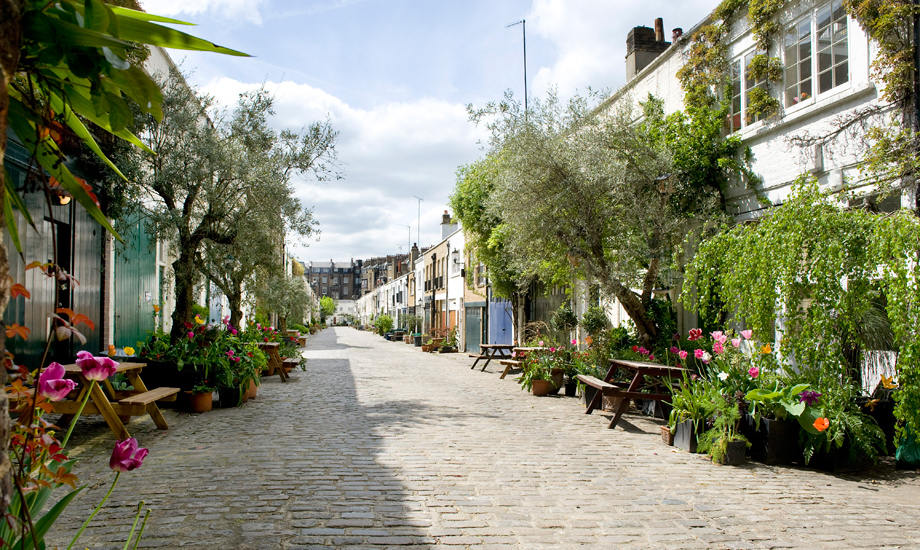 It was the prettiest street I have ever seen in London. I had to cast aside my usual dislike of the west of the city. The cobbled, uneven road took me back to a different era when the mews houses would have housed horses and carriages, not ultra modern kitchens and Mercedes Benz’. Every house had a picnic bench outside and plants lined the street- old olive trees, palms, an array of multi coloured flowers and ivy crawling down the walls. It felt like another world!
Half way down the street, a new scent caught my attention and after inhaling deeply I knew it was hay. How curious that I should smell that lovely horsey smell so strongly on this residential street. But 50m on he stopped me and pointed out one of the mews houses. Inside were 5 or so horses! Right there in the middle of central London, living on probably one of most expensive streets.
Outside were mounting blocks, curry brushes and a pot of hoof oil with a paint brush – this was Hyde Park Stables. I was in heaven. I stood there for a while, mesmerised, stroking a handsome chestnut mare through the fence. It was absolutely silent except for the sound of the horses munching away at the hay. Standing on that cobbled street with only the moon providing rays of light, it was hard to believe that it was real, and not just part of a dream. 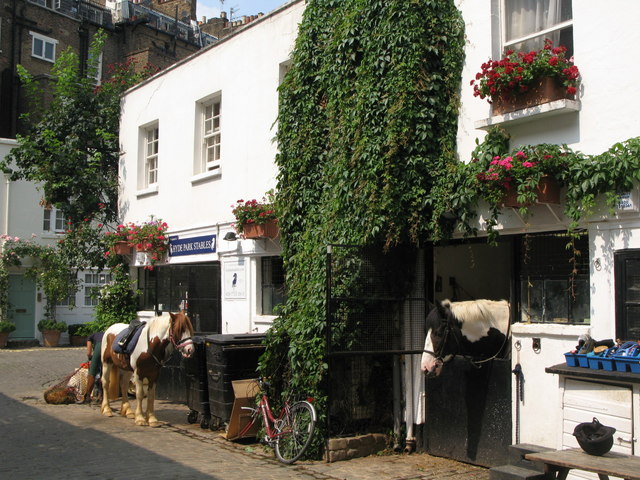 After a while we walked on and stepped off Bathurst Mews to the main road. It felt like the sound had been muted before and now it came back full blast!
We ended the perfect evening with two hours of ice skating at the nearby Queenway Ice Rink. Apparently Saturday nights are disco nights so there was a DJ and coloured lights moving on the ice – very cheesy but a lot of fun. I definitely need to work on my fitness! A few loops of the rink at top speed and I was out of breath. I had forgotten how much I love ice skating – need to go more often, and at £10 a session (which lasts 3 hours), it’s pretty good value!