Wild boar, beaver, quail and venison – it’s no wonder this restaurant is named after the Lithuanian word for ‘Bear’ (Lokys). As you lope through this forest of a menu, your inner wild creature will take over as you let your feral instincts of scent and taste reign; and I can assure you, you won’t be disappointed. 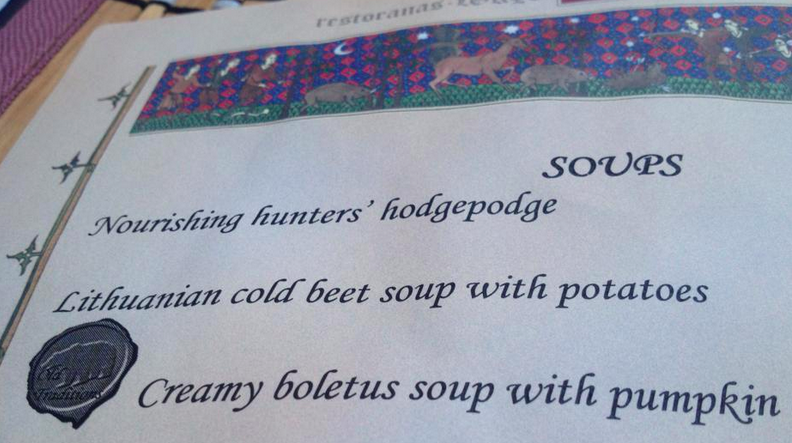 Lokys holds court over the elegant and charming Stikliu Street in the heart of Vilnius’ old town. In the 16th Century, Lithuanian Grand Dukes encouraged merchants and craftsmen to settle in Vilnius, with many of them building their houses, workshops and taverns onto what would become Stikliu Street. The restaurant is located in a former merchants house – a beautiful old building of the deepest blood red brick, unmissable with it’s heavy black stable door window shutters.

The restaurant serves local delicacies, it’s menu starring game dishes from the Middle Ages when hunting was the way of life for the nobility, and meals were banquets.

The rich, strong flavours of the game are tempered by sweeter, softer tastes such as cowberry sauce or sweet pear. Each dish is a marriage of the the masculine and feminine, and these marriages are unions of pure, blissful love. 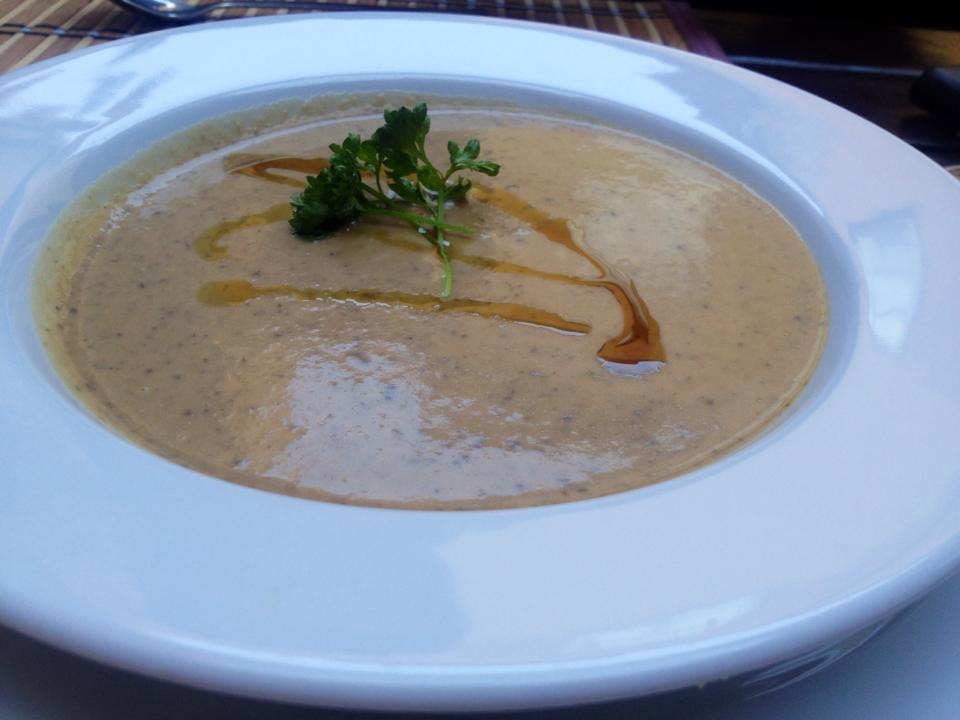 Ever since I tried boletus in a risotto as a young girl, other mushrooms have been spoiled for me. Nothing can match its intensely deep, rich flavour. When I found out that Lithuanian cuisine reveres this king of the mushrooms I was delighted (I wont admit to it having anything to do with choosing Vilnius as a holiday destination though).

If you visit Lokys you have to order the boletus and pumpkin seed soup – it was certainly the highlight of my visit to Vilnius, and Vilnius is a stunningly beautiful city! It’s everything you wanted from a mushroom soup but didn’t know to ask for. If it weren’t for all the other tables of people I would have licked the bowl clean!

The soup was served with duona – a very unusual black rye bread that was lightly flavoured with caraway seeds to give it that hint of aniseed. The bread came with sour cream and dill rather than butter – so there were a lot of flavours flitting about. 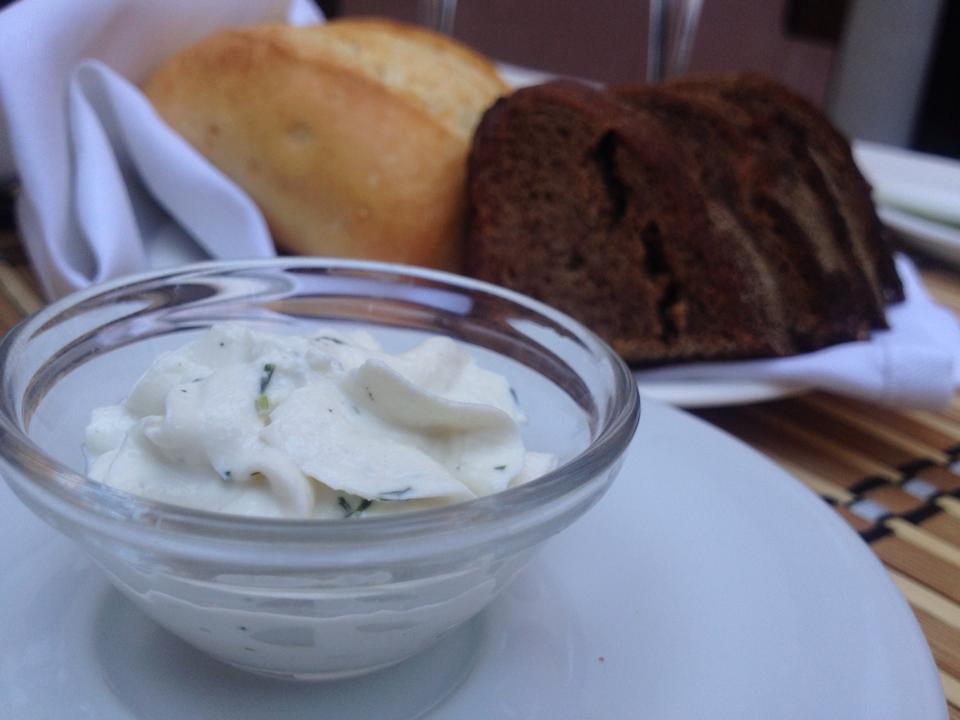 We ordered two mains – the Venison Meat with Boletus and Apples (served with potatoes) and the Quail, beloved by Charming Lithuanian Ladies (served with sweet pear, cowberry wine sauce and pearl barley). I couldn’t resist ordering another dish with boletus as I love these mushrooms so much. However I’m much more of a sauce person and in retrospect I wish I had tried the venison with a honey-wine sauce.

The truth is, everything on their menu sounds delicious, even the rustic beaver stew and I’m not really that adventurous with meats! I would love to go back someday to continue my woodland journey through their menu. 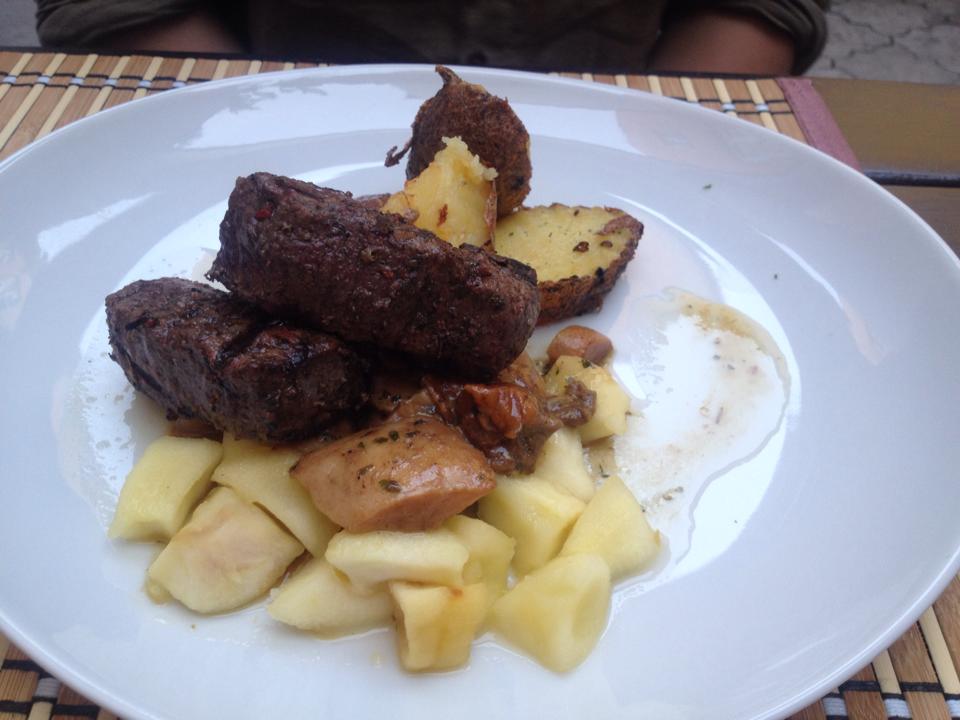 Venison steak with boletus and potatoes

The quail was absolutely delicious – light and flavourful and perfectly matched with the pears and cowberry-wine sauce! 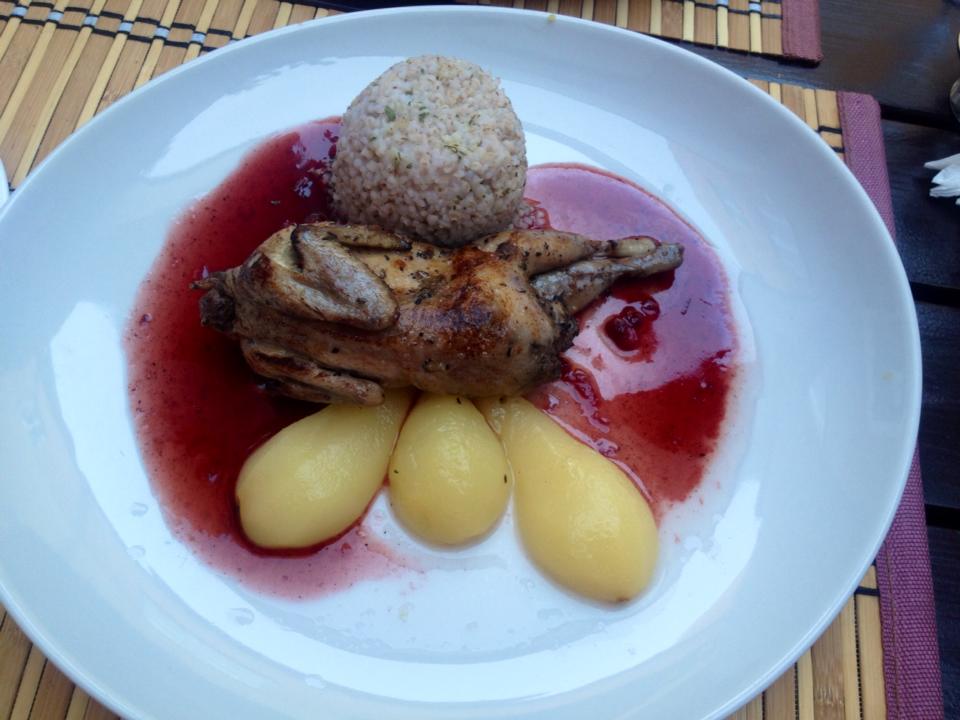 To finish off the meal we opted for the Skruzdėlynas – twisted, thin deep-fried pastries which are flavoured with sunflower, poppy, flax seeds and buckwheat honey. While it was very tasty, we were incredibly full at this point and probably wold have been better off with the quince panna cotta, a sorbet or indeed skipping dessert altogether and going on a long, calorie burning run! 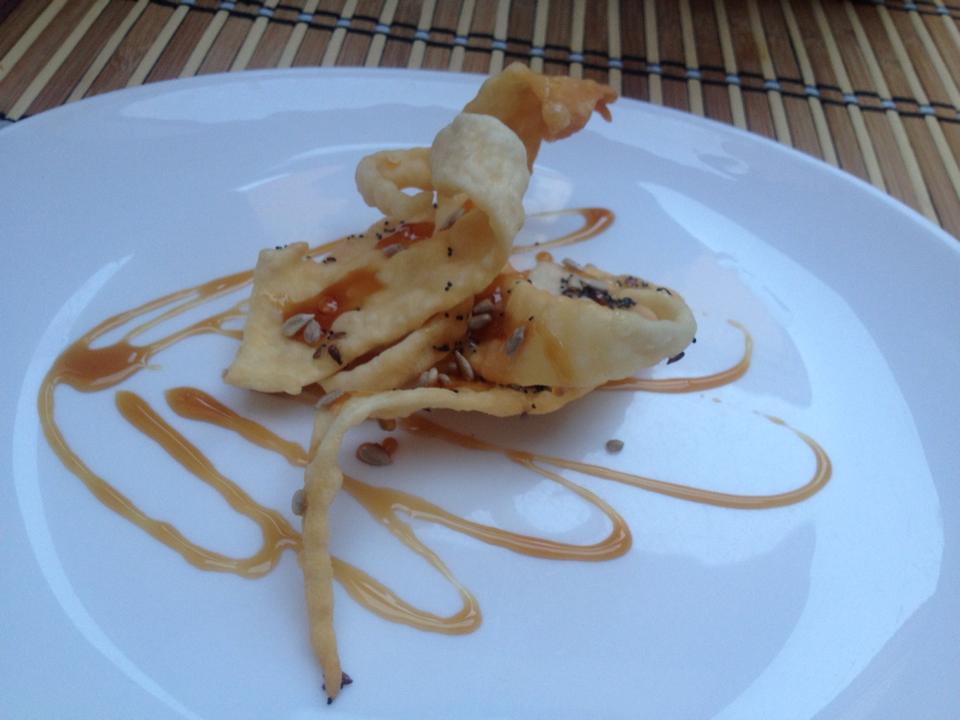 This was one of the best restaurants I’ve ever been to – the restaurant is beautiful, humming with activity and serves the best mushroom soup possibly in the whole world. (Oh and there’s a lovely beer garden outside)! I’m no judge of whether or not the food is authentically Lithuanian – but if it is I will be back in Lithuania very soon to keep on tasting!