I woke up to a bowl of home made hummous with cumin and chilli flatbread smothered in melted butter and a deliciously thick omelette. I don’t think I will ever get blasé about these breakfasts – they’re too special! 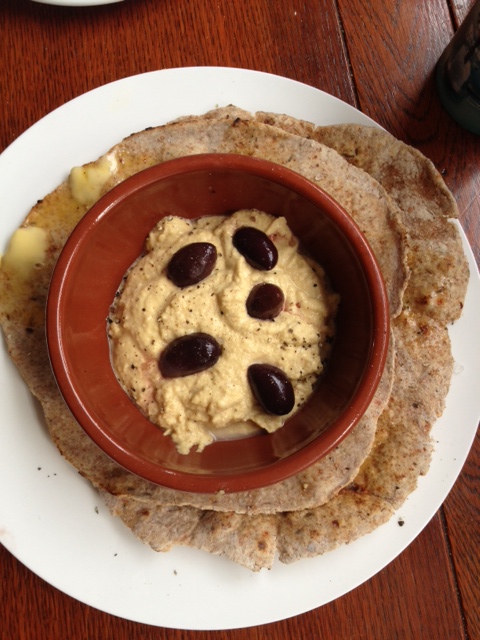 We have decided that at least once a week we will make a 3 course meal, which is a big deal as we rarely make desserts!

Started off with some wild boar salami and Castelveltrano (Sicilian) olives from Jamie Oliver’s deli followed by a big bowl of pasta and some grilled sardines on a bed of asparagus and baby courgettes.

As always we made fresh tagliatelle, but feel free to use dried pasta, or to buy fresh pasta! 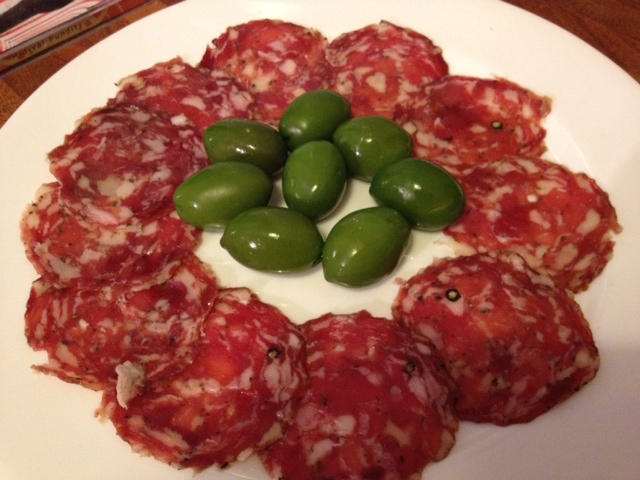 This is one of the simplest recipes around – it takes 5 minutes or less to make the sauce and it’s so healthy and very tasty! I came across it when I was on holiday in Trapani, in Sicily and use it all the time!

Blend a punnet of cherry tomatoes, 1 clove of garlic, a pinch of salt (not too much as the parmesan is salty!) a handful of basil, one large red chilli, parmesan cheese, and a pack of almonds in the blender until you get a thick and slightly chunky sauce. You can keep blending if you prefer a  smoother sauce, however I think it tastes nicer with a bit of body. I used pine nuts on this occasion instead of almonds as someone was allergic to almonds. They worked just as well, however i’ll write down the original recipe for almonds as it is more traditional in Sicily. 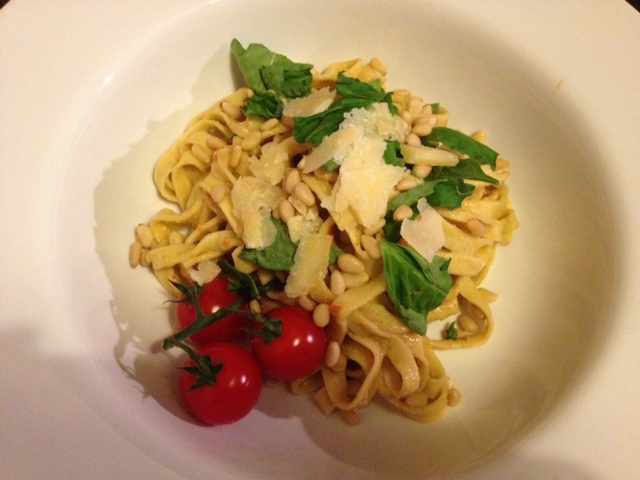 Once the pasta is cooked, drain out the water and mix the sauce in well with the pasta in the pan.

I always like to garnish the dish with some torn basil leaves, sliced almonds (in this case pine nuts!) but you could also add in some parmesan shavings.

For the main course we sliced some baby courgettes in half and laid them out in an oven dish with asparagus and sliced lemon and placed the gutted and de-scaled sardines on top. We drizzled some oil over, added cloves of garlic and ground some salt and pepper on top. We left the dish in the oven for about 35 minutes – more than necessary for the fish to cook, but just enough time to create a delicious juice from the fish and lemon that really made the vegetables! I was practically licking the plate at the end of the meal! 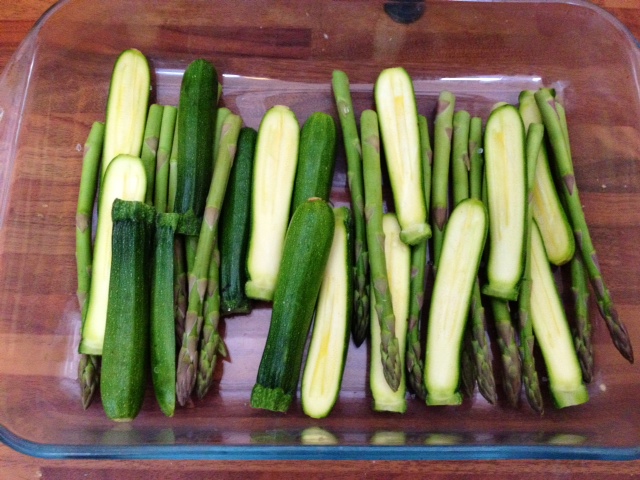 A lot of people, especially in the UK, are wary of sardines because of the hundreds of tiny bones. It’s a real pity because it is one of the best tasting fish available, it’s very healthy and usually very cheap! I think what people don’t realise is that the bones are very soft and you can just eat them! 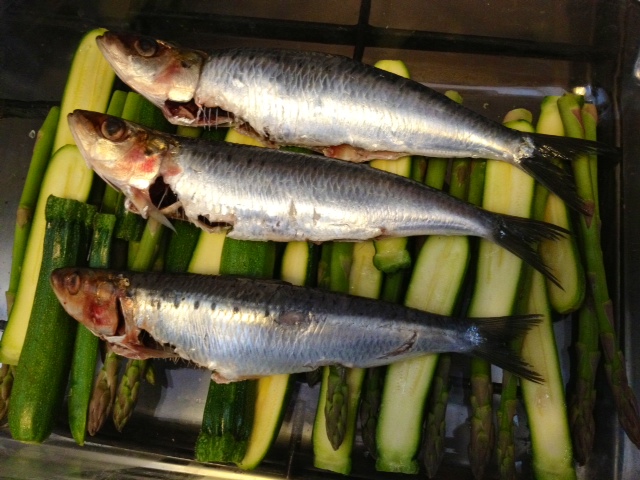 For dessert we decided that a light panna cotta would go well with the Italian/Sicilian inspired meal. My dad has been making panna cotta since we were very young – we youthfully called it ‘white stuff’, so I fished out his recipe:

Submerge the gelatine leaves in cold water and leave for 5 mins until soft. Meanwhile heat the cream in a pan with the sugar and stir until the sugar has dissolved. Place the softened gelatine in with the cream and sugar and whisk for a minute until it is all melted then remove from the heat.

In another bowl mix the Greek yoghurt with the vanilla essence then scrape in all the beans from the vanilla pod. 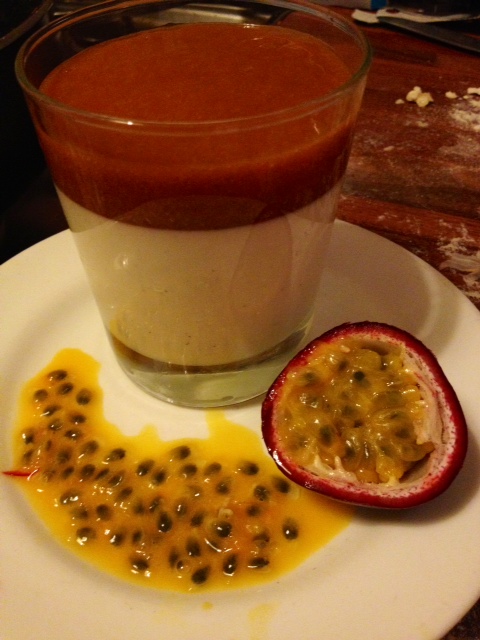 Mix together then add the cream-gelatine-sugar mix and whisk again.

My dad used to then pour this mixture into a large plastic tupperware and once it was set, remove it from the mould. However we poured the mix into separate glasses so each person had an individual portion.

To make the purée, destone the apricots and then blend them with sugar and a bit of water.

Leave in the fridge for 2-3 hours (until set) and serve with fruit with the purée on top.